On the Statistical Characterization of Sprays

In aero-engines, the introduction of biofuels is among the best alternatives to fossil fuels, and this change is likely to affect the impact of droplets on interposed surfaces. Under this framework, this work reviews the main morphological hydrodynamic structures occurring upon the impact of a liquid droplet on a wetted surface, using jet fuel and biofuel mixtures as alternative fuels. The experiments performed allow investigating the effect of the liquid film thickness on the dynamic behavior of single drop impact, considering the relevancy of these phenomena to the optimization of engine operating parameters. Particular emphasis is given to the occurrence of crown splash, and the morphological differences in the outcomes of drop impact depending on the impact conditions and fluid properties. The four fluids tested included pure water (as reference), 100% Jet A-1, 75%/25%, and 50%/50% mixtures of Jet A-1 and NExBTL (Neste Renewable Diesel)—with the Weber impact number between 103 and 1625; Reynolds values 1411–16,889; and dimensionless film thicknesses of δ = 0.1, 0.5, and 1. The analysis on the secondary atomization for the different fluids evidences the predominance of prompt and crown splash, and jetting for alternative fuels. Finally, besides a systematic review of empirical correlations for the transition to splash, we investigate their universality by extrapolating the validation range to evaluate their ability to predict the outcome of impact accurately. One of the correlations studied show the highest degree of universality for the current experimental conditions, despite its limitation to thin liquid films (). View Full-Text
Keywords: droplet impact; experimental; fuel mixtures; drop impact models; liquid film; splashing transition droplet impact; experimental; fuel mixtures; drop impact models; liquid film; splashing transition
►▼ Show Figures 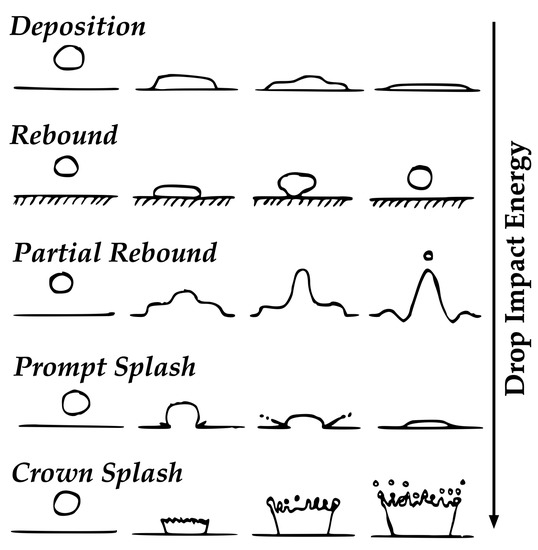