Heat pulse method is a transient method that estimates soil thermal properties by characterizing the radial transport of short-duration line-source heat applied to soils. It has been widely used to measure a wide range of soil physical properties including soil thermal conductivity, thermal diffusivity, heat capacity, water content, ice content, bulk density, water flux and evaporation in laboratory and field environments. Previous studies generally focus on the scientific aspects of heat pulse method based on selected publications, and there is a lack of study investigating the heat pulse publication as a whole. The objective of this study was to give an overall view of the use of heat pulse method for soil physical measurements from the bibliometric perspectives. The analyses were based on the Web of Science Core Collection data between 1992 and 2019 using HistCite Pro and VOSviewer. The results showed an increasing trend in the volume of publications on this field and Dr. Robert Horton was the most productive researcher coauthoring papers on the heat pulse method. The co-authorship analysis revealed that researchers from soil science are closely collaborated, but this is not true for researchers in other fields. There is a lack of new young scientists committing to this field while the older generation of researchers are retiring. The United States Department of Agriculture Agricultural Research Servics (USDA-ARS), the China Agriculture University and the Chinese Academy of Science were the top three organizations applying the heat pulse method, while the USA, China and Canada were the top three countries. The Soil Science Society of America Journal, Water Resources Research and Agricultural and Forestry Meteorology were the most widely used journals. The con-occurrence and citation analysis could be used to map the development of the field and identify the most influential publications. The study showed that the bibliometric analysis is a useful tool to visualize research status as well as to provide the general information of novices and experts alike on the heat pulse method for soil physical measurements. View Full-Text
Keywords: scientometrics; science mapping; VOSviewer; HistCite Pro; heat pulse method scientometrics; science mapping; VOSviewer; HistCite Pro; heat pulse method
►▼ Show Figures 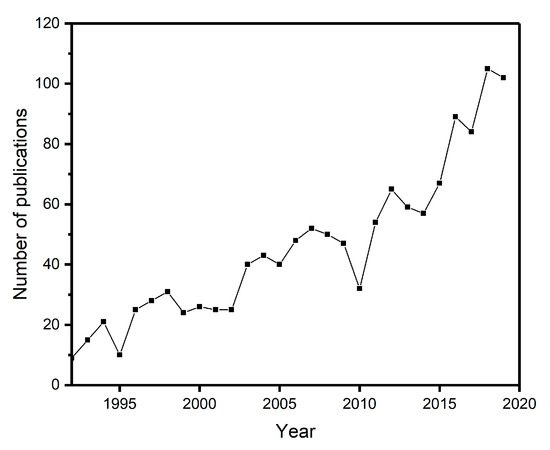