This paper provides a series of investigation references to set configuration of the main parameters in the technical application of underwater wet welding (UWW).

Welding is a metal joining process which has a crucial role in the manufacturing industry. This process applies heat on the joined metals, so they are melted, fused and joined. This process usually requires a filler metal and sometimes requires pressure to help the joining process of metals [1,2]. Under certain conditions, underwater welding is needed, even recently, underwater welding is widely used for maintenance and repairing the damage of underwater structures and underwater pipelines to extend the lifetime of these facilities [3]. For example, underwater welding has been applied to the maintaining of nuclear power equipment. Water is a moderator and cooler in a nuclear reactor. For maintaining the nuclear reactor, the underwater welding process must be conducted to prevent pollution of nuclear radiation [4]. Another application of underwater welding is for retaining the offshore platform structures. Managing of these structures usually requires special underwater repair operations. Although several other methods can be used, underwater welding is still considered one of the best practices based on economic reasons.
Based on the principle of the welding process, two types of underwater welding, underwater dry and wet welding processes are well known. Underwater dry welding is a method of underwater metals joining in a weld chamber which is conditioned in a sterile environment. Weld chamber is used to avoid the adverse effects of water and ensure that welding quality is similar to welding joint on land. Underwater wet welding is an underwater welding process which uses a particular waterproof stick electrode. It is carried out directly underwater, so the arc is surrounded by the water environment. Underwater wet welding generally is recommended due to its advantages including equipment is simple, the welder can more easily mobilize welding equipment in water, the preparation process required is fast, the operation is smooth, and the operation costs is cheap. However, the underwater wet welding (UWW) technique also has disadvantages including a decrease in material ductility, increase material hardness in the heat-affected zone (HAZ) area, defects in the weld metal, weld arc instability and the presence of water waves around the welding area. These can be a significant problem because they affect the underwater welding joint, which is susceptibility to crack propagation, high porosity and low mechanical properties. There are many kinds of welding technique for underwater welding application including manual metal arc, flux cored arc welding, gas metal arc welding, etc. The most popular technology for underwater welding application is manual metal arc (MMA) welding due to it is simple and low cost in equipment and operational. However, it will cause problems where metallurgical quality and weld defects are often found and very dependent both on the welder skills and weld parameters [5]. It is essential to evaluate the properties of underwater MMA welding based on its settings, including weld current and electrode type. Weld current will affect the arc stability, penetration, heat input and HAZ width [6,7]. The electrodes of MMA welding can be classified based on the electrode coating in which it will obtain varies in mechanical properties and low hydrogen diffusible levels of weld metal [8]. Due to the hygroscopic property of the electrode coating, the electrode is still requiring special treatment before being used to avoid the hydrogen diffusion into weld metal.
Underwater structures are placed in an underwater environment and subjected the corrosive fluid such as seawater with a certain level of salinity. Base metals, HAZs and weld metals of underwater weld joints have different potential to lead the corrosion process to occur. It means that underwater welding process will affect the corrosion resistance of joint area significantly because it is related to the heating and cooling rate as well as the coating type of electrode in underwater welding [9,10]. This work aims to evaluate the effects of weld current, type of electrode and depth of water on the corrosion rate of underwater welded steel.

The material used in this study was SS 400 steel which was widely applied to marine construction. The specimen size was 100 mm × 100 mm × 3 mm. SS 400 steel is low carbon steel that has a carbon content of 0.05%. The electrodes used were E7016, RB 26 and RD 26 type rutile underwater electrodes with a diameter of 3.2 mm waterproof and protected by wax. The underwater welding process was carried out in the water with a depth of 2.5 m, 5 m and 10 m in the experimental pond using the SMAW welding process. The results of underwater welding are to be compared with ground welding. The welding parameters used in the welding process are electric currents 100 A and 110 A. During an observation in one setting, e.g., water depth. Other parameters, e.g., voltage and current, will be set to be a constant value. Electrodes in this study are selected based on market availability with consideration to the existing range that can be used to weld thin plates with a certain thickness. According to the WPS (welding procedure specification), the lower current limit for low carbon steel plates with a thickness of 3 mm is 100 A. If welding is carried out with a current lower than 100 A, the arc is unstable, and the weld results will have a low penetration. Conversely, the upper limit of the current is 110 A, because if it is welded with a current higher than 110 A, the plate will experience holes.
Practically, the three electrodes are often used in welding underwater carbon steel materials, and technically they can substitute one another. However, the technical review of underwater welding is limited to its acceptance of the standards used such as AWS which reviews physical and mechanical properties. The physical properties are in the form of welding defects and appearance of the welding campus, while the mechanical properties consist of tensile, bending and impact strength. Chemical properties in the form of corrosion are not a requirement for acceptance of the welded joints, so the effect of these types of electrodes on corrosion has not been investigated. According to the results of this study, electrode selection recommendations can be added to the corrosion resistance requirements. The corrosion testing method used for this test was the three-electrode polarization resistance method to determine the surface corrosion rate of welded joints. As a comparison, corrosion tests on the results of ground welds were also carried out. Illustration of cutting and dimensions of the specimen is as shown in Figure 1. Scanning electron microscope (SEM) and energy-dispersive X-ray spectroscopy (EDS) tests were carried out to see the type of corrosion that occurred and the distribution of chemical composition of intermetallic matrix and particles. Corrosion test using VersaStudio 2.50.3 software (AMATEK, Inc., Berwyn, US) and VersaSTAT 4 hardware (AMATEK, Inc., Berwyn, US). This test was carried out with a range of −0.25 V to 0.2 V against corrosion potential (Ecorr) and a scan rate of 2 mV/s. As a comparison, corrosion tests are also carried out on the ground welding results. Corrosion testing is carried out by scanning V values by rotating the potentiodynamic in stages and obtaining voltage (V) and current (A) data, then plotted in the E–I graph. From this graph plot obtained Tafel constants for anode and cathode in the form of graph slope and corrosion current (Icorr) which is in the way of the intersection of the two Tafel constants. The corrosion rate is expressed by the formula:CR is the corrosion rate in miles per year (mpy) which will be converted into mmpy (millimeters per year), 0.1288 is a factor constant in mpyg/μAcm, Icorr is the current density in μA/cm2, ρ is the density in g/cm3. (EW) can be expressed as an equivalent weight, where EW = Neq−1, whereas Neq can be stated by the formula: The per cent mass fraction of an element in an alloy is shown by fi, ni is the electron valence of the item in question, and ai is the atomic weight of the component.

This work is fully supported by the Universitas Sebelas Maret, Indonesia under the PNBP 2020 research program with scheme of Mandatory Research 2020 grant with Contract No. 452/UN27.21/PN/2020. 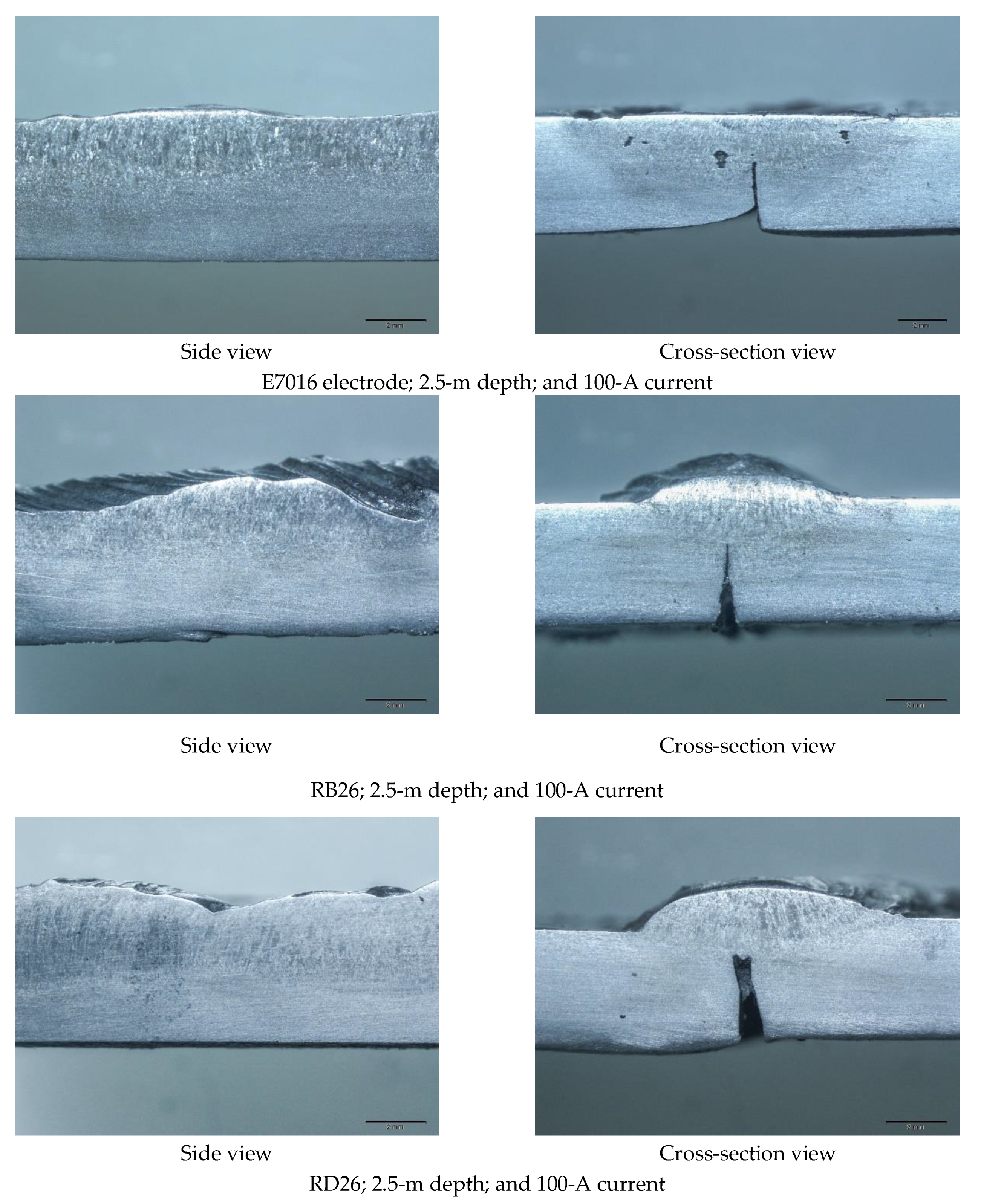 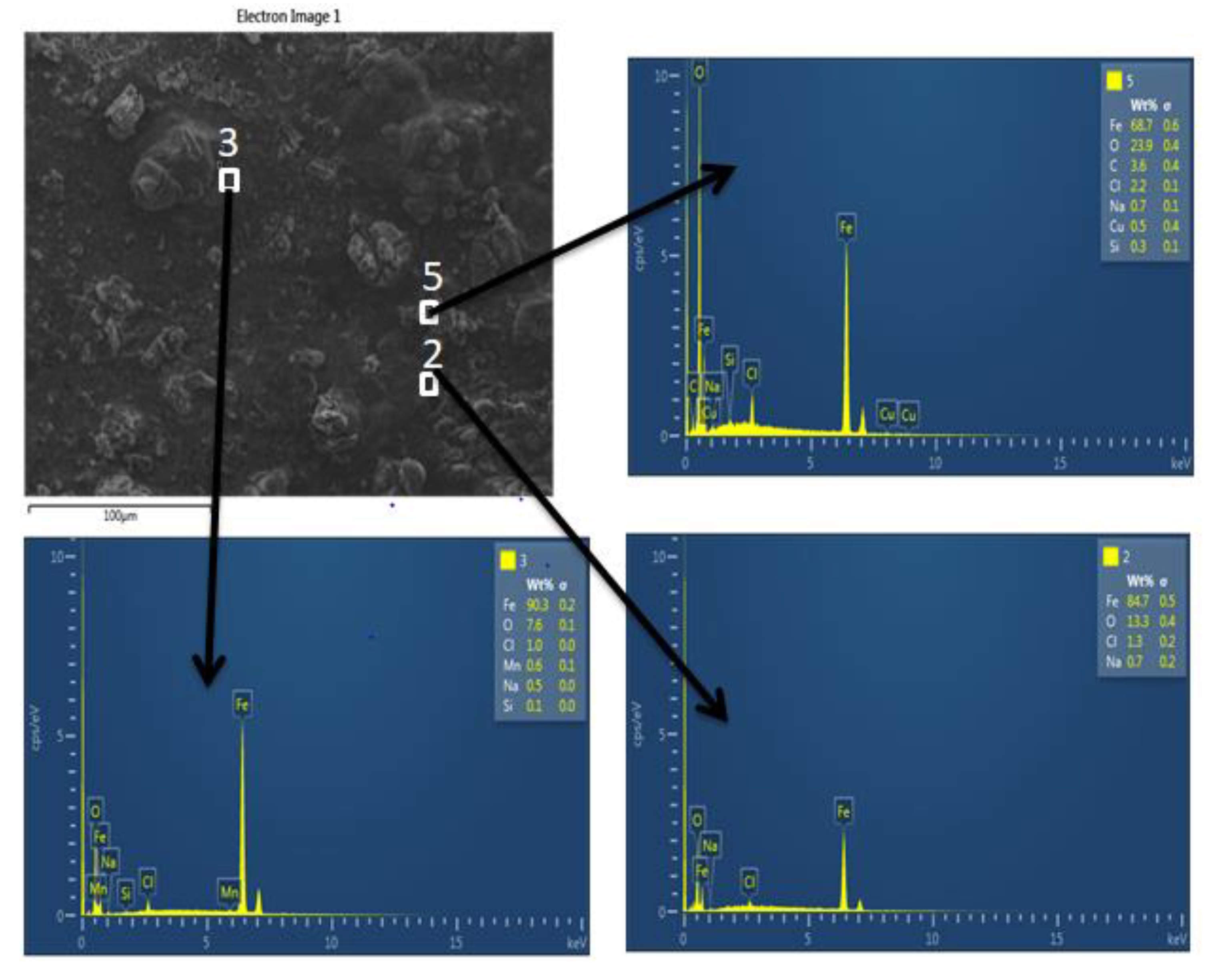 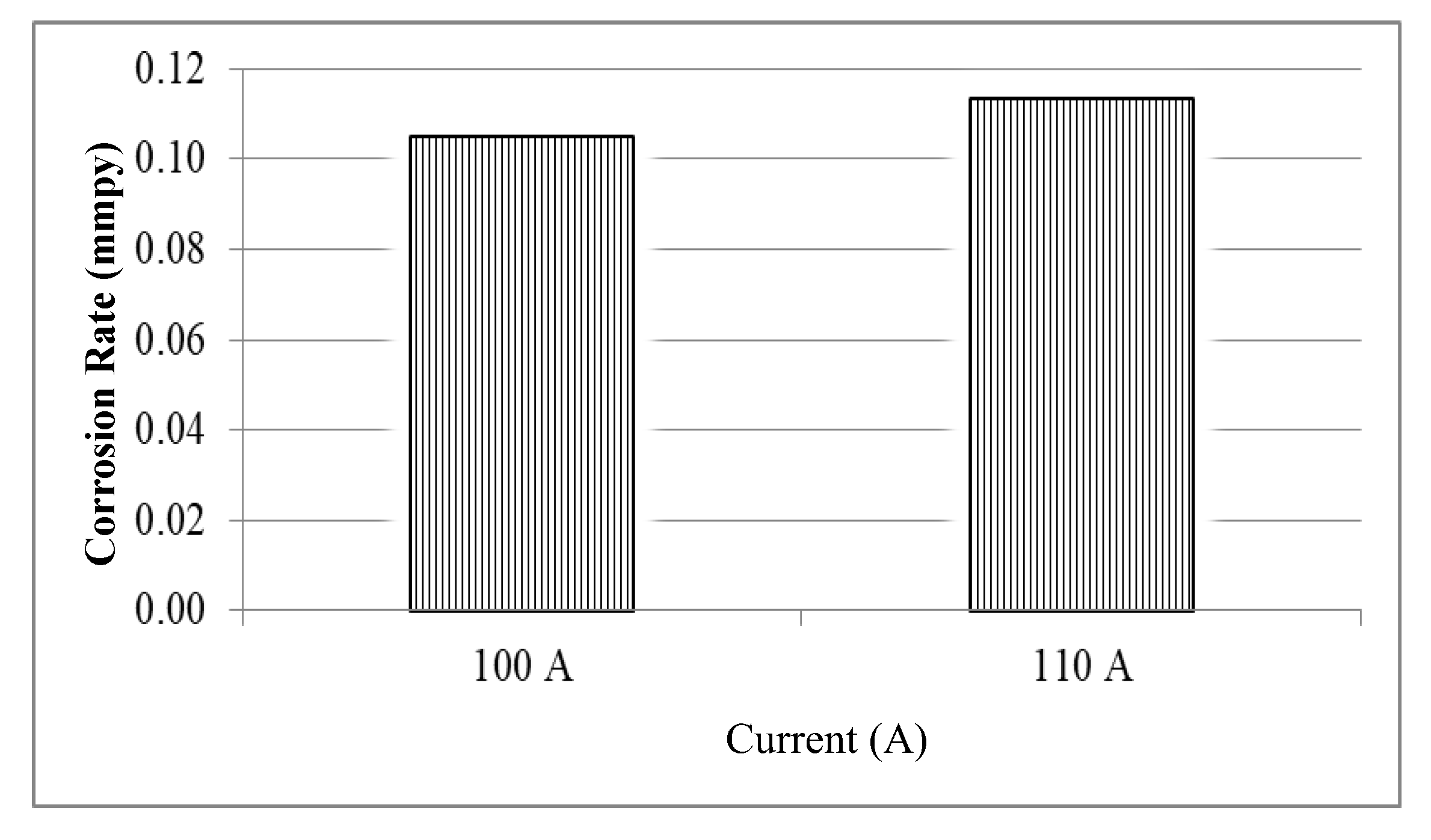 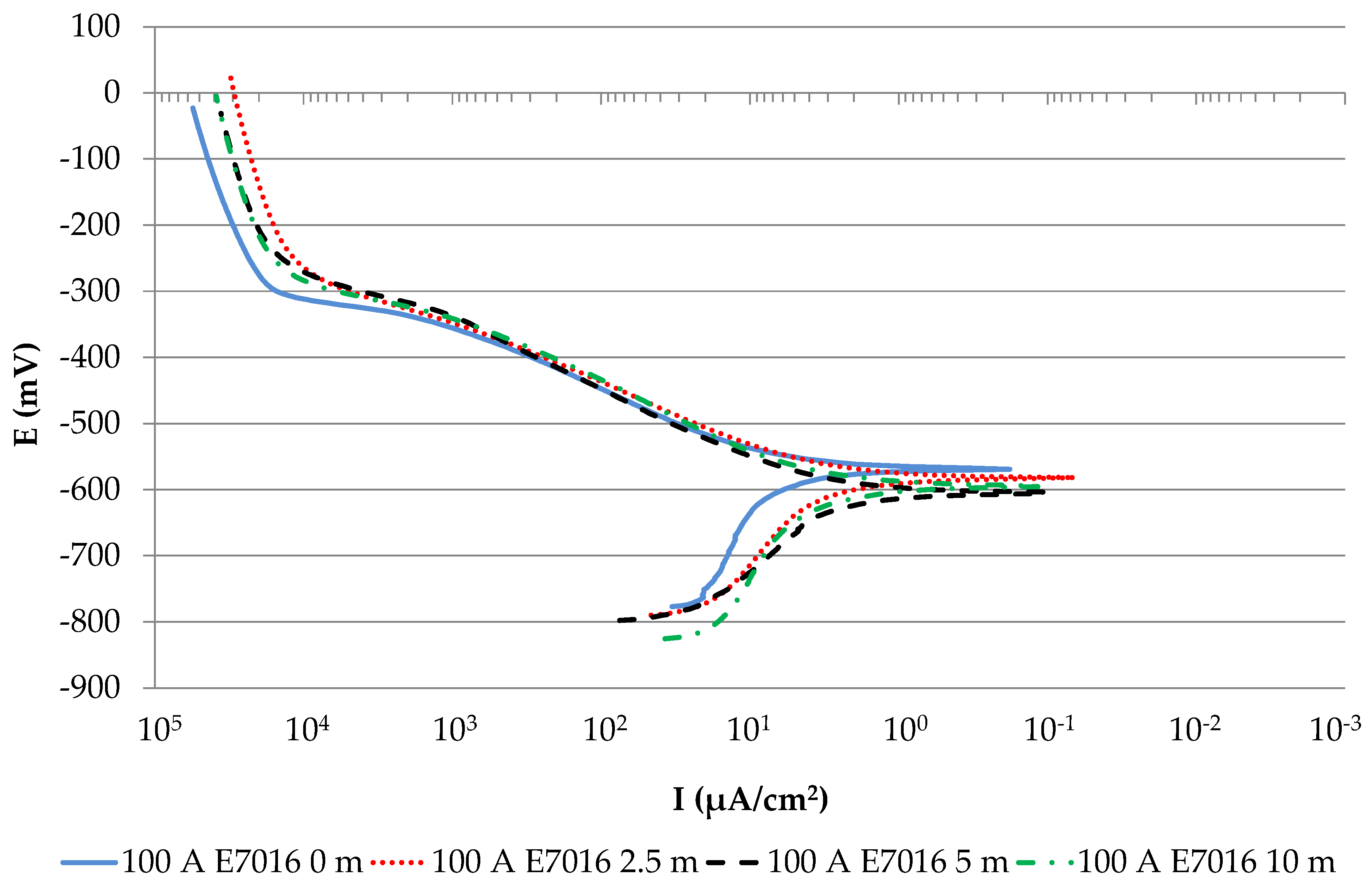 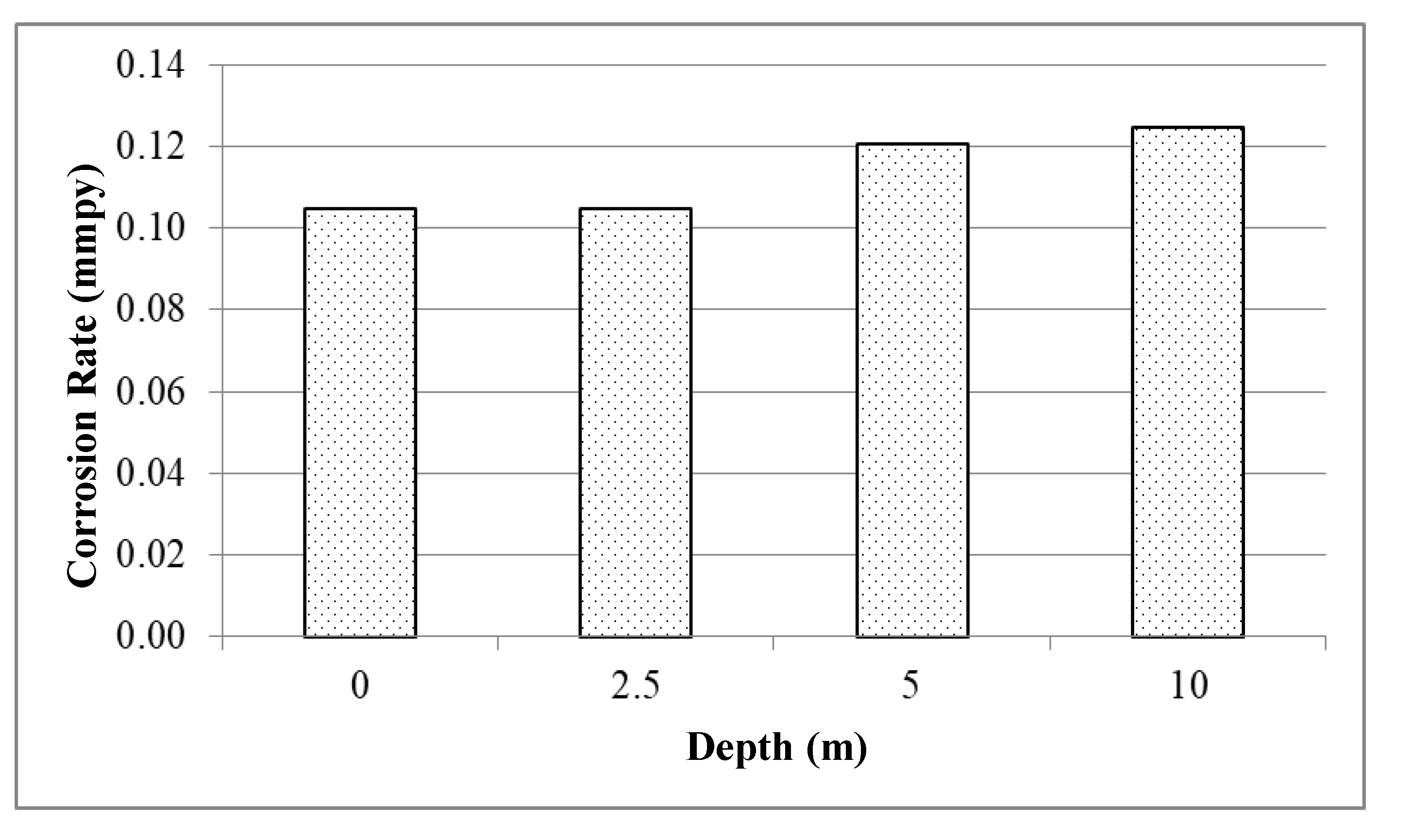 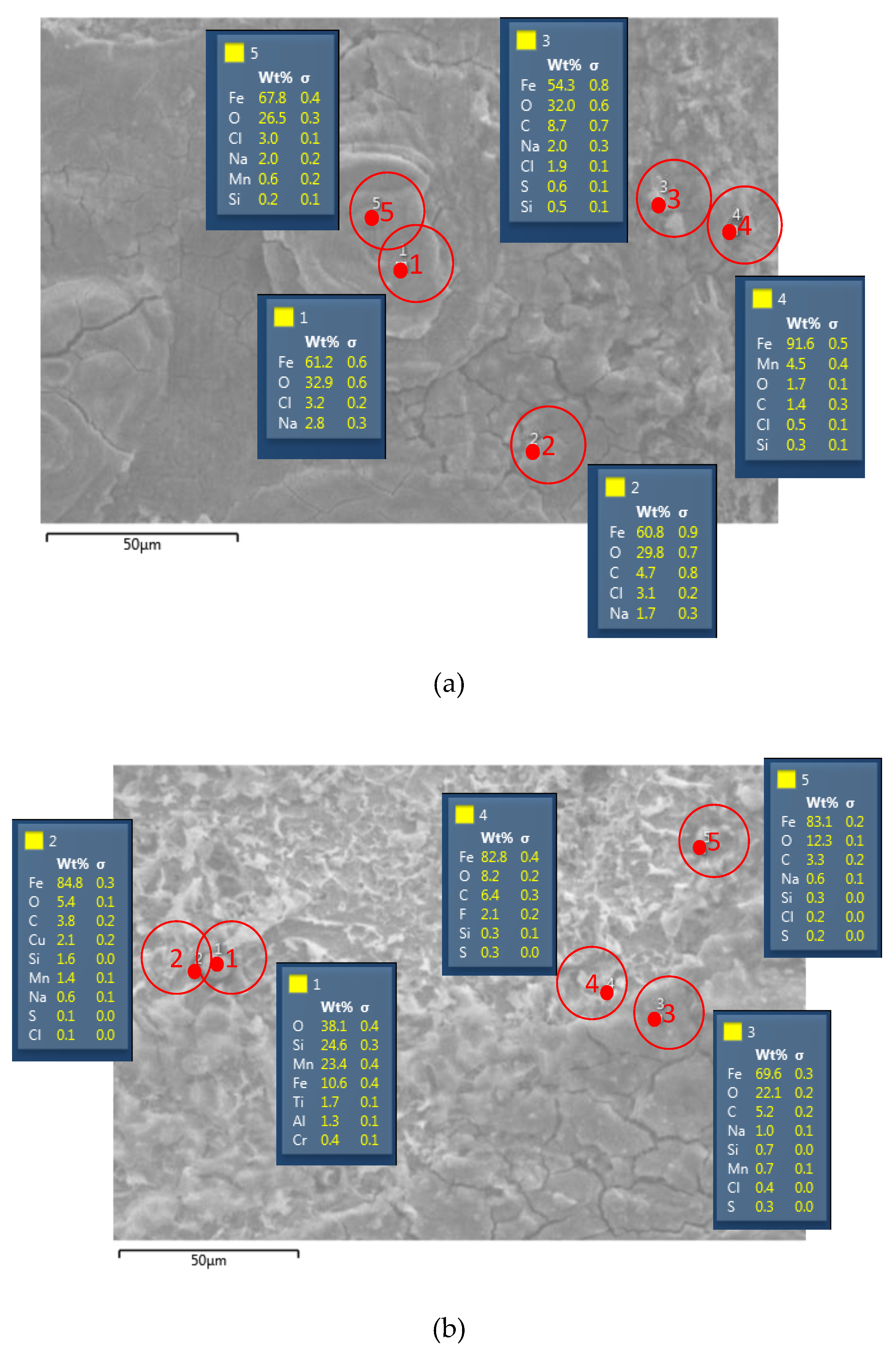 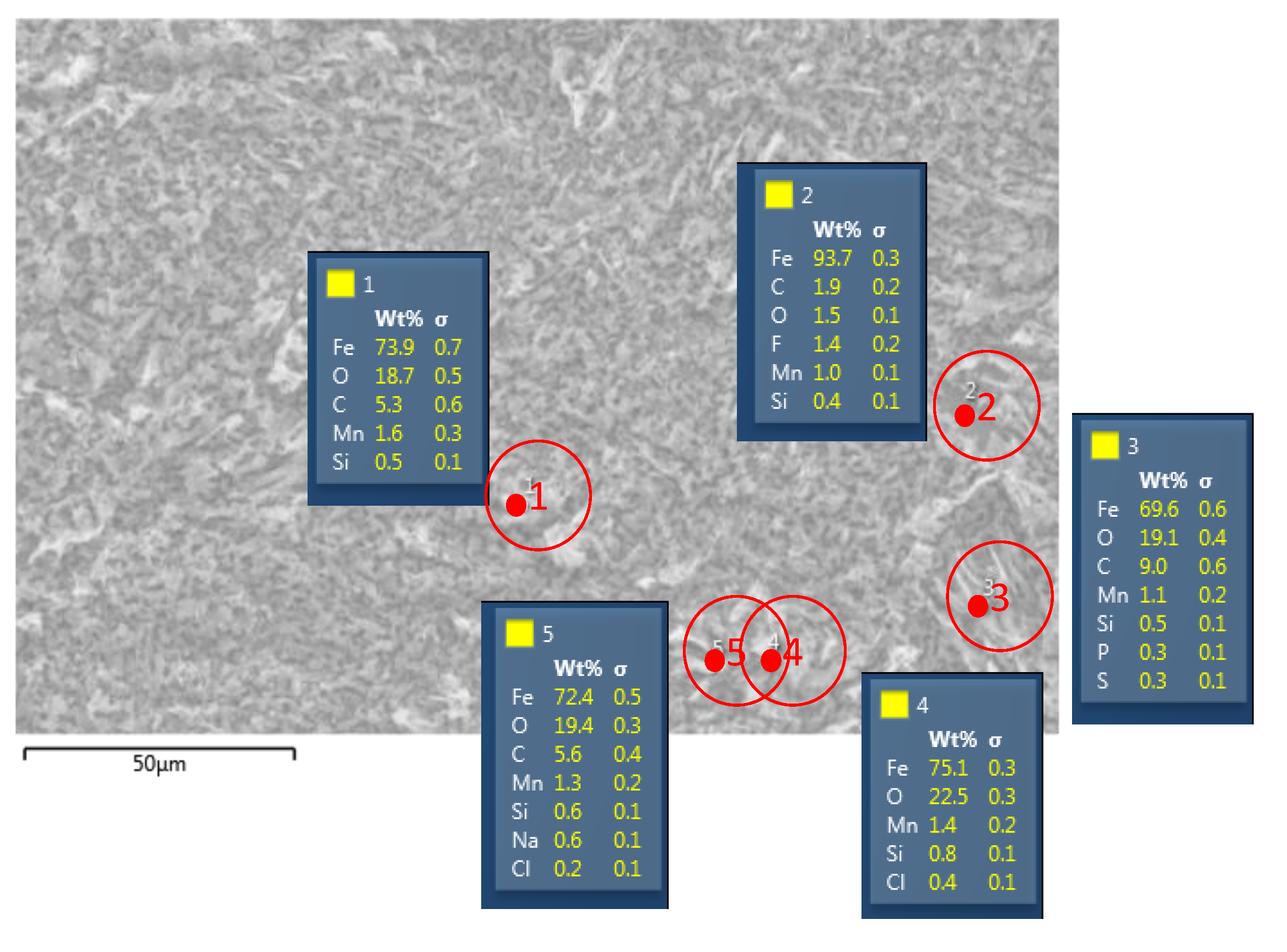