3D-Printed Surgical Guide for Crown Lengthening Based on Cone Beam Computed Tomography Measurements: A Clinical Report with 6 Months Follow Up

Excessive gingival display is a common clinical presentation that often requires surgical intervention. This report is for a patient for whom esthetic crown lengthening is indicated due to altered passive eruption. Cone beam computed tomography (CBCT) scan and an intraoral scan were used to design and print a single surgical guide which provided a reference for both gingivectomy and osteoectomy. A satisfactory outcome was obtained 6 months after surgery. The present technique provided a simplified method of generating a surgical guide with predictable results by relying on the existing tooth anatomy rather than diagnostic waxing. This technique is particularly useful when crowns or veneers are not indicated.
Keywords: crown lengthening; surgical guide; CBCT; CAD/CAM; 3D printing crown lengthening; surgical guide; CBCT; CAD/CAM; 3D printing

Excessive gingival display, which can be due to altered passive eruption (APE) or gingival enlargement, results in short clinical crowns; this is a cause of common esthetic concern for many patients. Gingivectomy or esthetic crown lengthening with bone resection is often required to increase the clinical crown length and achieve acceptable esthetic outcomes [1]. The decision whether to perform bone resection is largely dependent on the location of the alveolar bone crest in relation to the cementoenamel junction. If the bone crest is at, or coronal to, the cementoenamel junction, then osseous resective surgery is indicated [2]. In order to locate the bone crest, bone sounding and periapical radiograph assessments are typically performed [3,4] However, these methods may be challenging and could provide inaccurate assessments [5]. Cone beam computed tomography (CBCT) has been suggested as a precise and reliable alternative approach for diagnosing APE [6].
To achieve adequate esthetic results, surgical guides are often utilized, and based on diagnostic waxing, made with acrylic resin or vaccuform transparent shells [7,8]. However, this technique has been reported to be sometimes inaccurate [9]. A recent report described a digital workflow in which digital waxing was used to design the surgical guide for crown lengthening [10]. The use of diagnostic waxing is not necessary when no restorative treatment is indicated.
Currently, there are no known studies that have used CBCT to locate the facial bone crest and to design a digitally fabricated guide for crown lengthening surgery. Therefore, this clinical report presents a patient with altered passive eruption, for whom CBCT was combined with digital scanning to make a single surgical guide for crown lengthening.

A 22-year-old female patient presented to the College of Dentistry clinics at Imam Abdulrahman Bin Faisal University with complaining of “a gummy smile” (Figure 1). Upon initial examination the patient did not show any gingival tissues at rest, however on full smile, 4 mm of gingival band was shown below the lower border of the maxillary lip. The medical history of the patient did not show any relevant medical issues, while dental history revealed that patient had completed orthodontic teeth alignment with clear aligner therapy 6 months earlier.
Furthermore, there were no significant findings on the extra-oral examination and patient was normally asymmetrical. The facial three thirds were analyzed and found to be normal. A lateral cephalometric analysis confirmed absence of vertical maxillary excess and dentoalveolar extrusion. The maxillary lip length was 19 mm, the incisal display at rest was 4 mm, and the lip mobility was also assessed and found to be 6 mm. The clinical crown lengths of central incisors, lateral incisors, and canines teeth were 8 mm, 7 mm, and 8 mm, respectively. The gingival phenotype was assessed using the probe-transparency test4 and was determined to be thick. A CBCT scan (CS9300; Carestream Health Inc., Kodak, Rochester, NY, USA) was acquired to analyze the level of the alveolar bone crest in relation to the cementoenamel junction. The radiographic parameter was set as 90 kVp/4 mA/s, with voxel size 200 μm, according to manufacturer’s exposure settings with a field of view 10 × 5 cm (diameter × height). Based on the sagittal cross section of the maxillary anterior sextant, the distance between the bone crest and the respective cementoenamel junction was at a maximum of 1.5 mm (Figure 2). The CBCT scan also showed that the patient had a thick buccal cortex. Due to the short clinical crowns presentation, the squarish appearance of the teeth, and the aforementioned clinical findings, the patient was diagnosed with excessive gingival display as a result of altered passive eruption APE type 1 with a low bone crest. Treatment options were discussed with the patient and esthetic crown lengthening with bone resection was proposed.

An intraoral scan (TRIOS; 3Shape) was acquired to aid in fabricating a surgical guide (Figure 3a). Digital Imaging and Communications in Medicine (DICOM) files were converted to Standard Tessellation Language (STL) format and then superimposed with STL files acquired from the intraoral scan using coDiagnostiX 9.7 software (Dental Wings INC, Montreal, Canada). Then using the design software (3Shape Premium Dental System; 3Shape), the level of the cementoenamel junction was marked (Figure 3b) to guide the gingivectomy incision line, followed by a second line 3 mm apical to the cementoenamel junction line to guide the bone resection. The virtual design of the surgical guide was performed accordingly.
Data was transferred to a three-dimensional printer (Formlabs II; Formlabs Inc., Somerville, MD, USA). The printer used utilizes stereolithography (SLA) technology with Laser Spot size of 140 microns and layer thickness of 25–300 microns. The guide was printed (Figure 4) and then checked to ensure it fits in the mouth of the patient prior to starting the surgery.

Local anesthesia (xylocaine with epinephrine 1:100.000) was administered via buccal infiltration. The guide was then placed. Using a 15c blade and following the upper border of the window of the guide, an internal bevel incision was made from right to left first molar teeth (Figure 5). The guide was then removed and a second incision was made in a sulcular fashion. The secondary flap was removed using a Youger-Good curette while visualizing the new crown lengths (Figure 6).
A full thickness mucoperiosteal flap was elevated past the mucogingival junction (Figure 7). The surgical guide was then placed again to determine the extent of osteoectomy needed (Figure 8), and the bone was marked with a round carbide bur. Using an end cutting carbide bur, osteoectomy was then performed; osteoplasty was performed after to remove buccal bone buttressing (Figure 9). The guide was then placed for a final check before internal vertical mattress sutures were placed using a monofilament non-resorbable material (5.0 Prolyne, Ethicon Inc, Somerville, NJ, USA) and hemostasis was ensured.
After surgery, the patient was instructed to take 600 mg ibuprofen 3 times/day for the first 7 days and to rinse with 0.12% chlorhexidine gluconate twice daily. On the 10th post-operative day, the patient presented for suture removal. Healing was uneventful (Figure 10). The patient then presented for recall at 6 weeks, and showed satisfactory outcomes at the 6 month follow-up (Figure 11 and Figure 12).

Surgical guides are usually fabricated as a reference for crown lengthening procedures, especially when anterior teeth are involved. When using Vacuform shells or an acrylic mock-up, diagnostic waxing is required to anticipate the future crown length and to act as a guide for soft tissue incision and freehand osteoectomy. In contrast, the technique presented provides guides for both gingival and bone resection; thus, it facilitates the surgical procedure and provides predictable outcomes. This is important for avoiding unnecessary bone removal, which may result in root exposure and tooth sensitivity.
The use of a digital workflow to fabricate a surgical guide has been reported recently [10], where the surgical guide was designed based on a digital wax-up. In this report, the CBCT scan was used to locate the cementoenamel junction and the surgical guide was designed and printed accordingly; this technique eliminates the need for diagnostic waxing when restorative treatment is not indicated. In some patients, when maxillary anterior teeth have incisal wear followed by compensatory eruption, the cementoenamel junction is more coronal than expected. Performing esthetic crown lengthening in such patients based on a diagnostic wax-up can cause excessive removal of soft tissues, which may in turn result in root exposure, mandating a restorative treatment that was otherwise not planned. Using a precise outline of the anatomical cementoenamel junction location of the patient can compensate for the variability among patients and reduce the chance of under- or over-contouring of hard and soft tissues. However, additional clinical studies are needed to confirm the reliability and repeatability of this technique.

This clinical report describes a method to design and print a surgical guide for esthetic crown lengthening based on the cementoenamel junction level, which was outlined using CBCT.

The authors would like to thank Ayham Chaban, Charismatic Dental Lab for his valuable contributions during guide fabrication. 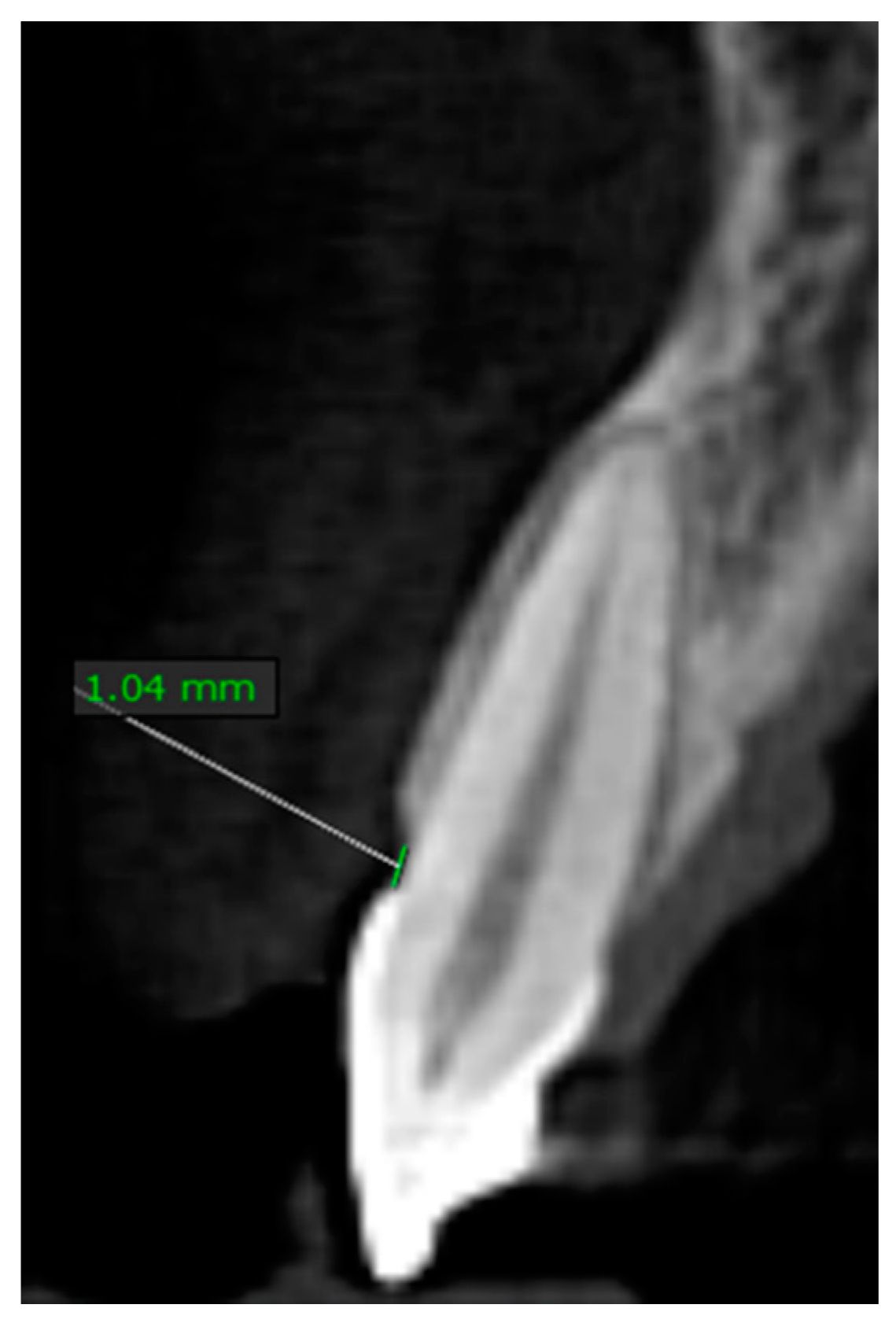 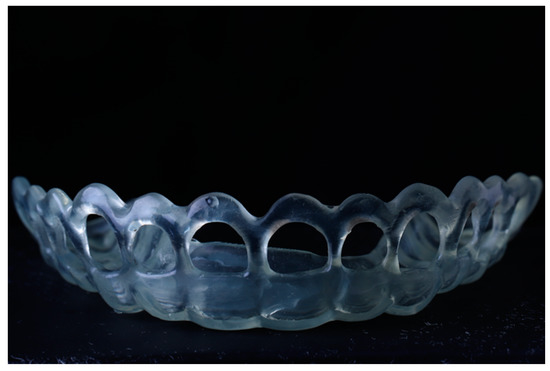 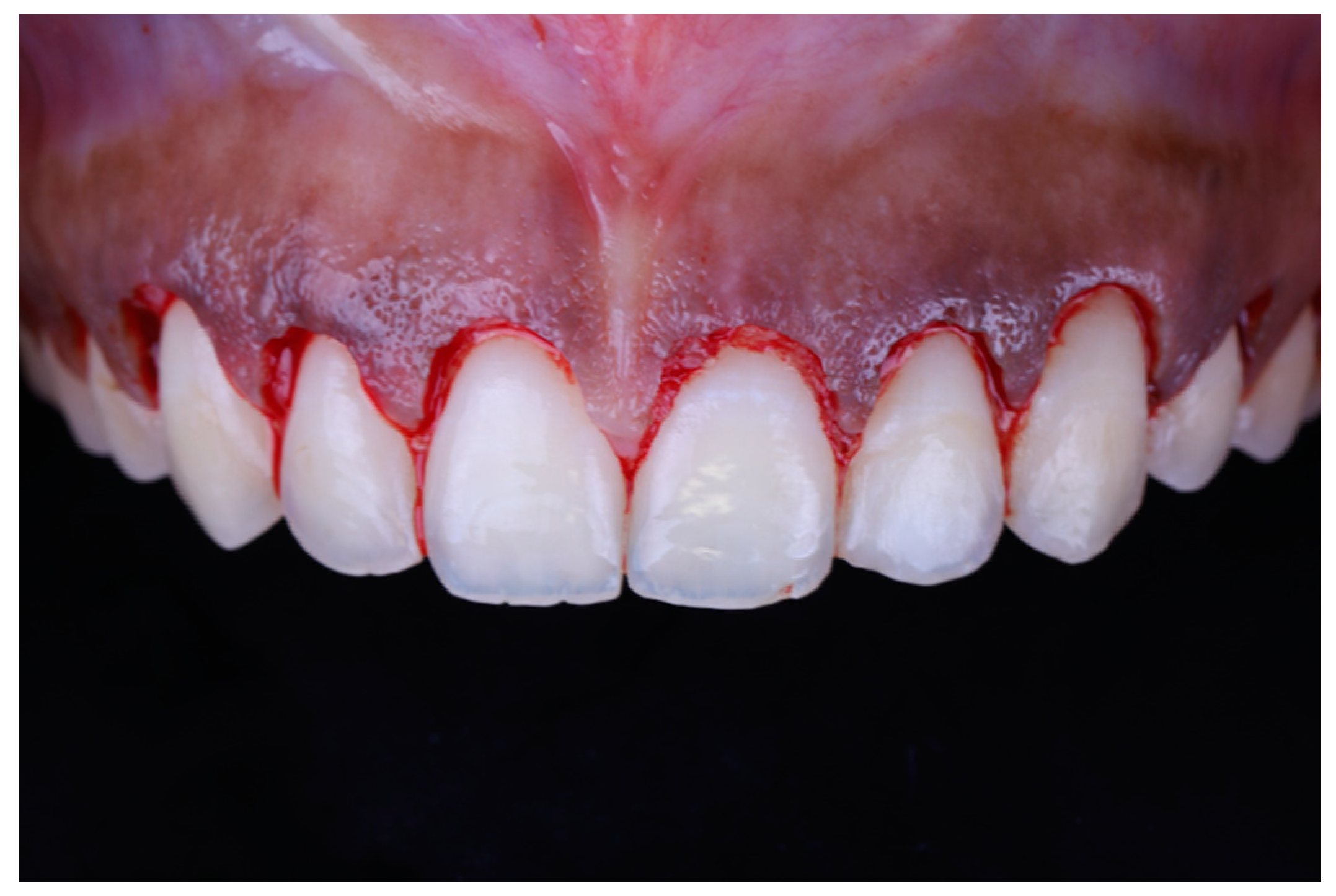 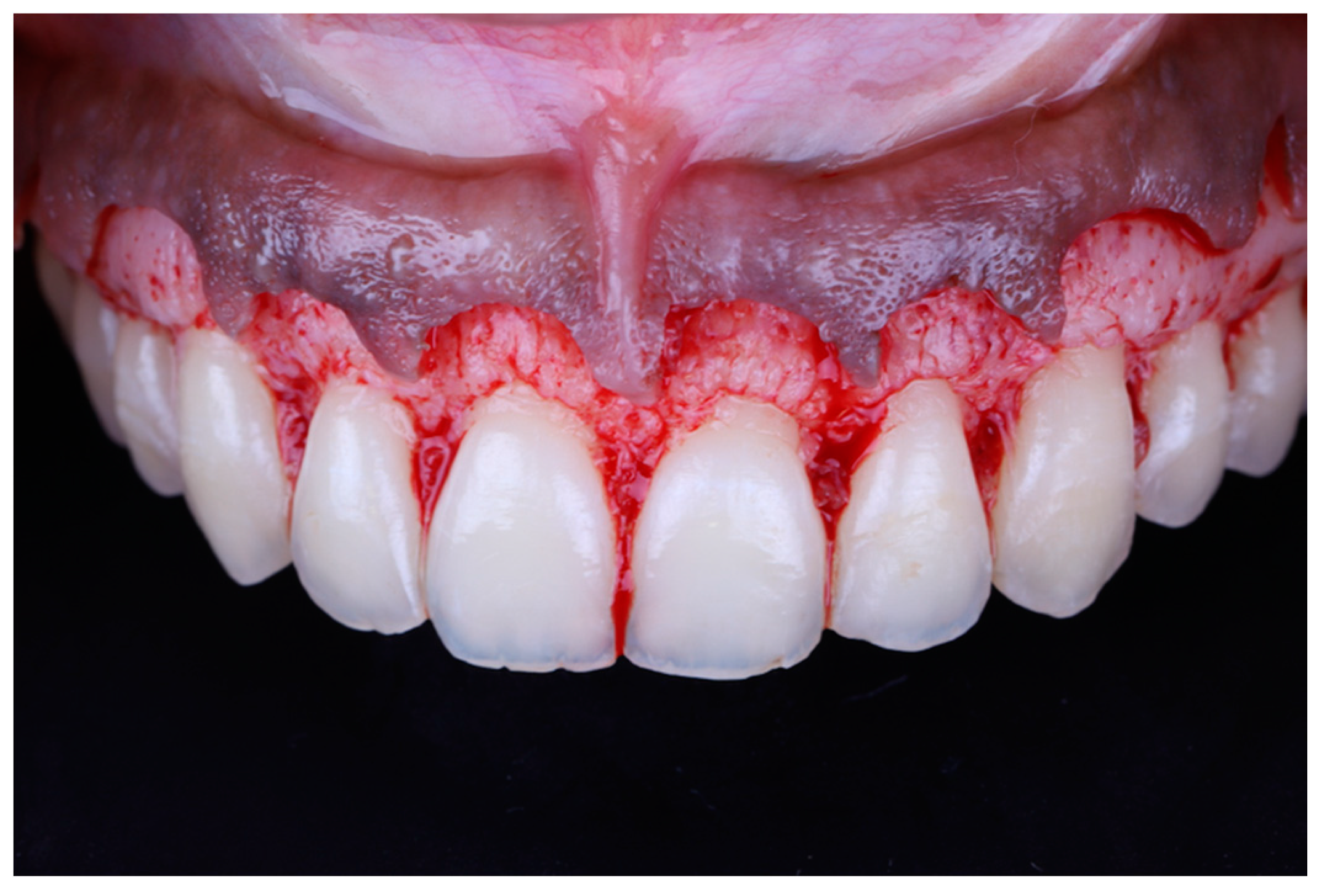 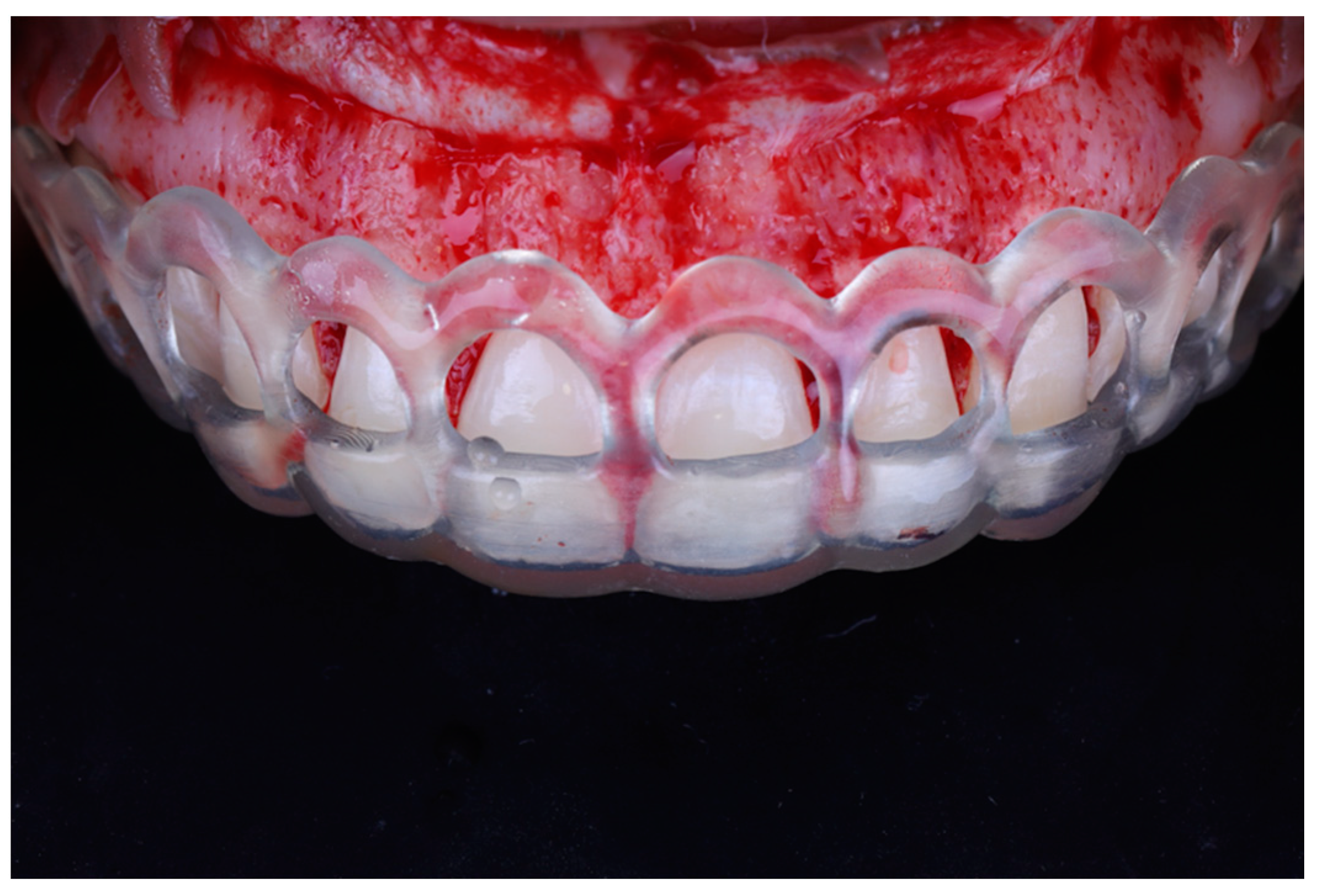 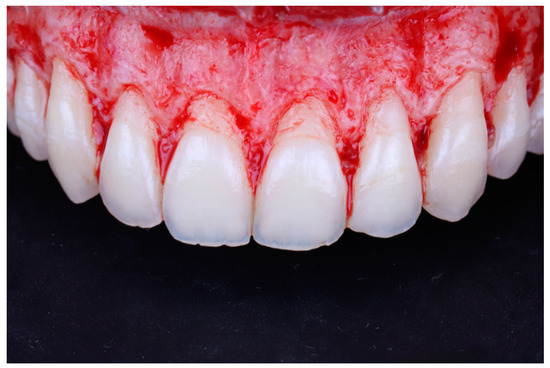