Characteristics of Deep Groundwater Flow and Temperature in the Tertiary Pohang Area, South Korea
Next Article in Special Issue

:
All around the world, researchers have raised concerns about the superlative geometrical, electronic, thermal, chemical and mechanical properties of carbon nanoparticles (CNPs). CNPs with low cost, high performance and prominent intrinsic properties have attracted extensive interest for numerous applications in various fields. Although CNPs have been studied mainly as transistors and sensors, they could also be considered as heat producers. However, this option has scarcely been studied. In this research, a CNP-based electro-thermal building block is synthesized by the arc discharge method in a carbonic medium (high-density polyethylene), and its behavior is investigated. It is shaped in the form of a metal–semiconductor–metal structure (MSM) between metallic electrodes, and in addition, the formation of two back-to-back Schottky diodes is analyzed and their use as CNP-based electro-thermal building blocks are reported.
Keywords:
carbon nanotubes; electro-thermal heating element; arc discharge; heat production; temperature-dependent electrical resistance

Carbon nanoparticles (CNPs) have caught the significant attention of researchers due to their outstanding electrical, mechanical and optical properties that make them useful components in various fields, such as lithium ion batteries, transistors, diodes, logic gates, sensors and field emitter manufacturing. On the other hand, CNP composites are well known for their physical, chemical and especially electrical properties [1] but heat generation by these materials is a device-limiting factor. However, as an electro-thermal component, they have scarcely been studied, although their thermal effect in the form of a CNP and high-density polyethylene (HDPE) interconnected network inside a polymer matrix has been reported [2,3]. It is notable that CNP-based heating elements indicate great potential as industrial equipment because of their light weight, clean energy production without the emission of by-products, controllability and low production cost [4,5,6,7]. For example, the heating capacity of Single wall carbon nanotube (SWCNT) films by coating them in glass, regarding the time and input power, indicates a rapid thermal response and stable reversibility [8]. Additionally, multi wall carbon nanotubes (MWCNTs) can be used as temperature sensors, which has been revealed by electrical resistance investigations of free-standing MWCNT films versus temperature [9]. Moreover, the conductive MWCNT/polymer composite has been used as a stain sensor by characterizing its electrical properties [10]. Additionally, carbon nanotubes (CNTs ) have been reported as conductive filler materials in polymer composites, which are useful for controlling the temperature in these composites as heating elements or sensors [11]. In addition, several studies reported on the application of nanoparticles such as CNTs, graphene and silver nanowires in flexible transparent thin film heaters [12,13]. Additionally, the effect of electro-thermal heating on CNT/polymer composites has been measured and it was indicated that the thermal degradation of CNT/polymer composites is more than for air convection heating [14]. Furthermore, the CNT ratio in the polymer composites as an important factor has been reported and it was indicated that a higher CNT ratio leads to a higher conductivity [15]. Since the performance of an electro-thermal device can be simulated by its electrical resistivity (slope of the V-I characteristic), that converts electrical energy into thermal energy, therefore, this report is focused on current–voltage (I-V) characteristic analysis. The current flow consequently determines the amount of thermal energy and heat generation, and thermal energy can be controlled by controlling the CNP resistance as well [16,17,18,19]. Accordingly, examining different samples with different electrodes plus changing the distances between the electrodes gives rise to the investigation of temperature-dependent CNP networks [20,21,22]. In this research, CNPs are synthesized by the arc discharge method in a carbonic medium (high-density polyethylene), and heat production based on fabricated CNPs as an electro-thermal building block is explored.

Effective and accurate heating devices with industrial and laboratory applications lead to the utilization of new methods and resources, such as carbon-based materials. The low production cost, as well as the remarkable property of CNPs, recommends their application in device development processes. Therefore, in this research, a CNP-based strand structure is introduced as a heating building block. Moreover, its different characteristic parameters are analyzed for the synthesized samples. Additionally, its behavior under fundamental theoretical work is confirmed and an acceptable agreement is reported. Furthermore, the results indicate that the temperature increases by enlarging the applied voltage value. Thus, temperature variation can be controlled by applied voltage on the CNP-based heating element. In industrial heating elements, a series of CNP networks is suggested, which causes a higher temperature rise. Since the CNP-based electro-thermal components are almost stable structures in the presence of very high temperatures, together with their cheap production methods, this encourages us to nominate them as future heating elements.

This work was funded by Ton Duc Thang University, Ho Chi Minh City, Vietnam. The research was also supported by the Ministry of Education, Youth, and Sports of the Czech Republic and the European Union (European Structural and Investment Funds Operational Program Research, Development, and Education) in the framework of the project “Modular platform for autonomous chassis of specialized electric vehicles for freight and equipment transportation”, Reg. No. CZ.02.1.01/0.0/0.0/16_025/0007293, as well as the financial support from internal grants in the Institute for Nanomaterials, Advanced Technologies and Innovations (CXI), Technical University of Liberec (TUL).

Appendix A. I-V, R-T and R-V Characteristics for MSM Structures with Steel Electrodes 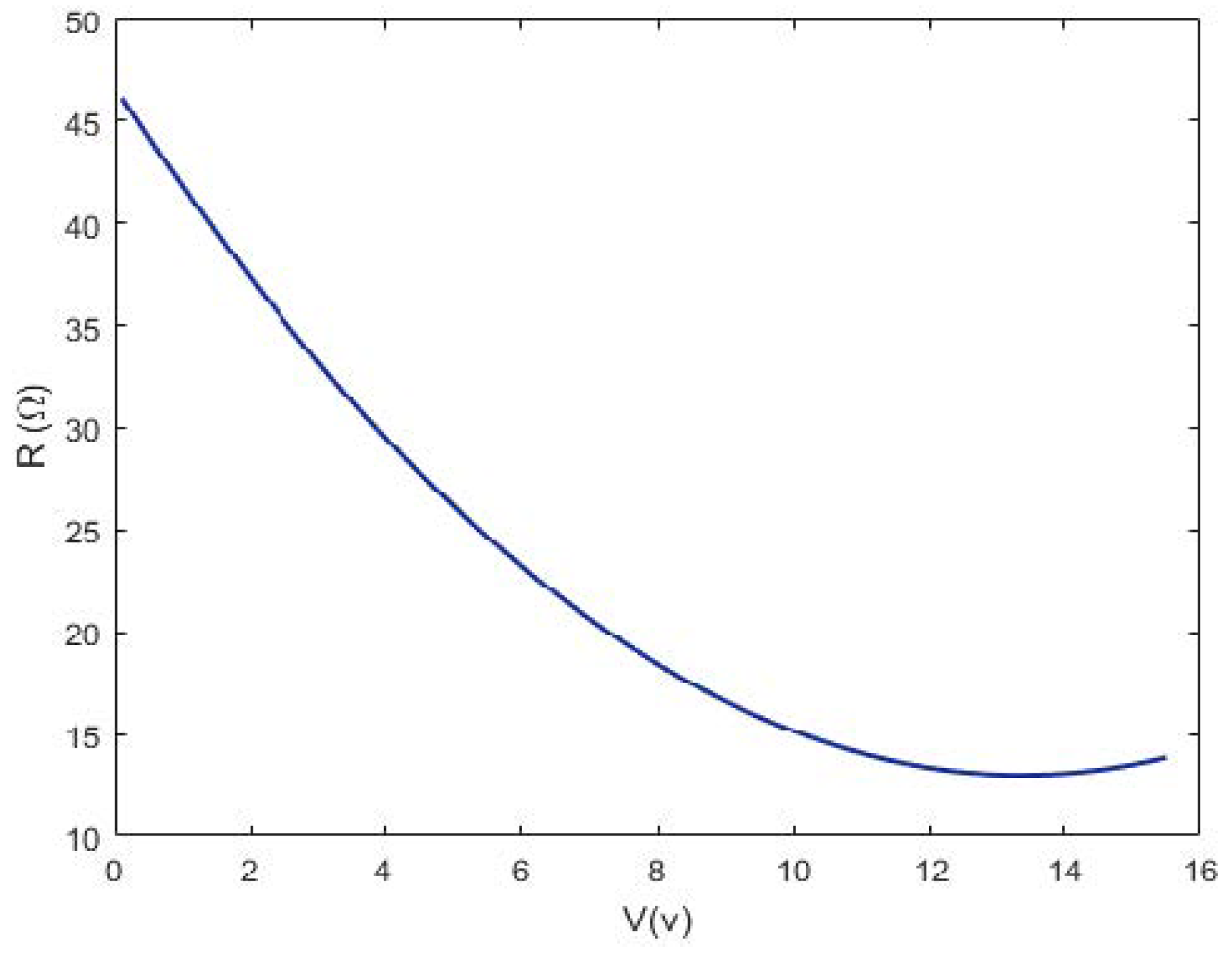 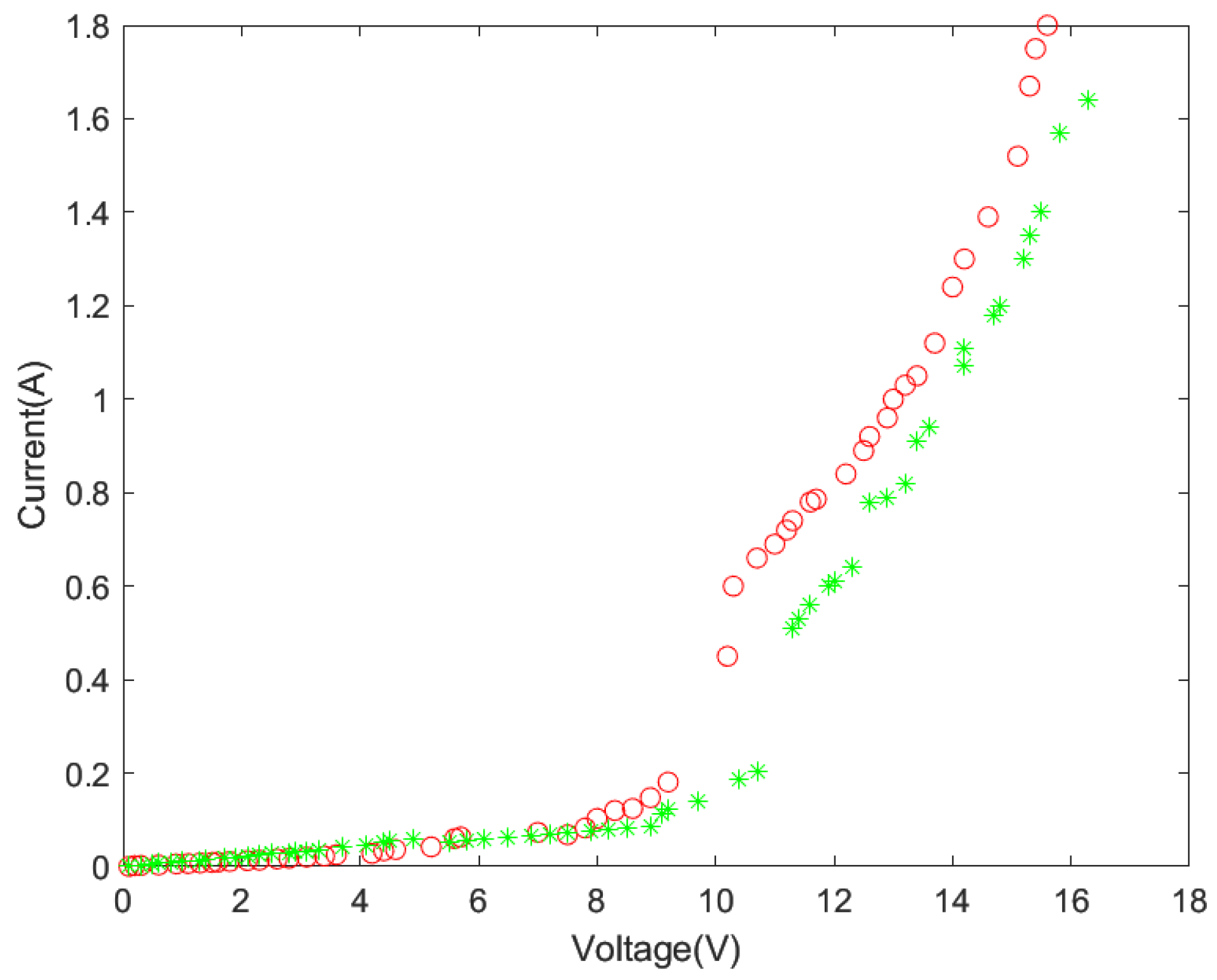 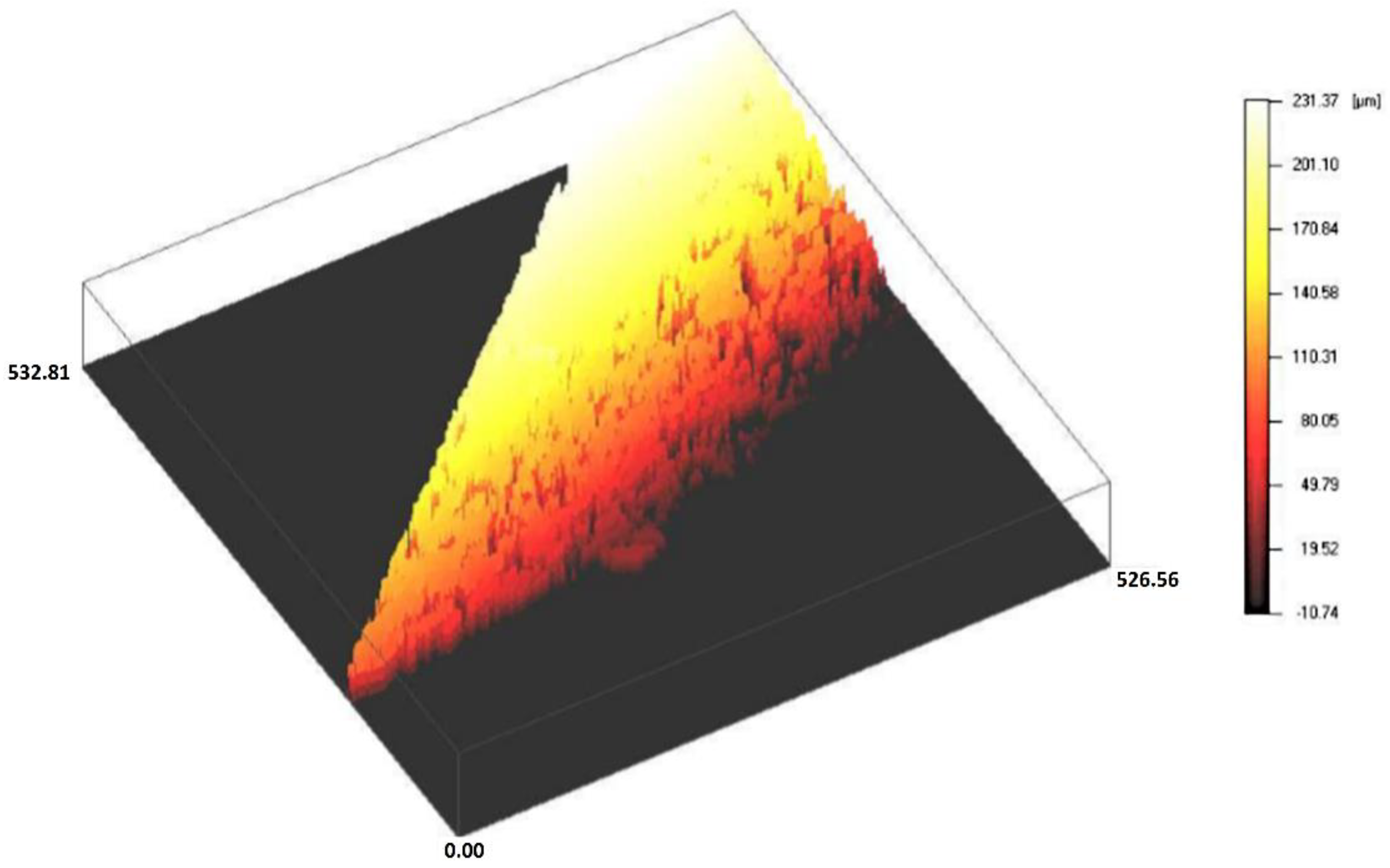 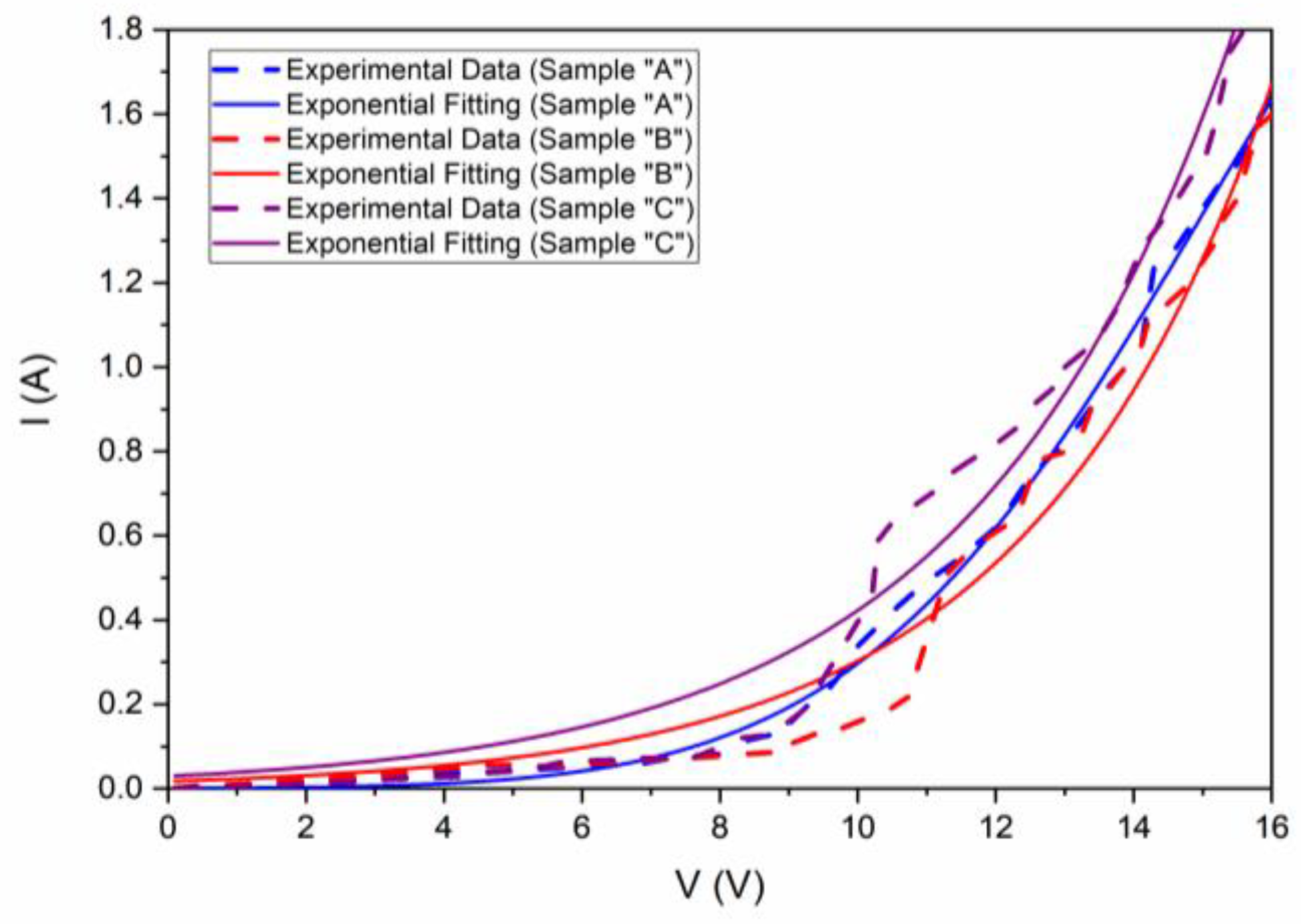 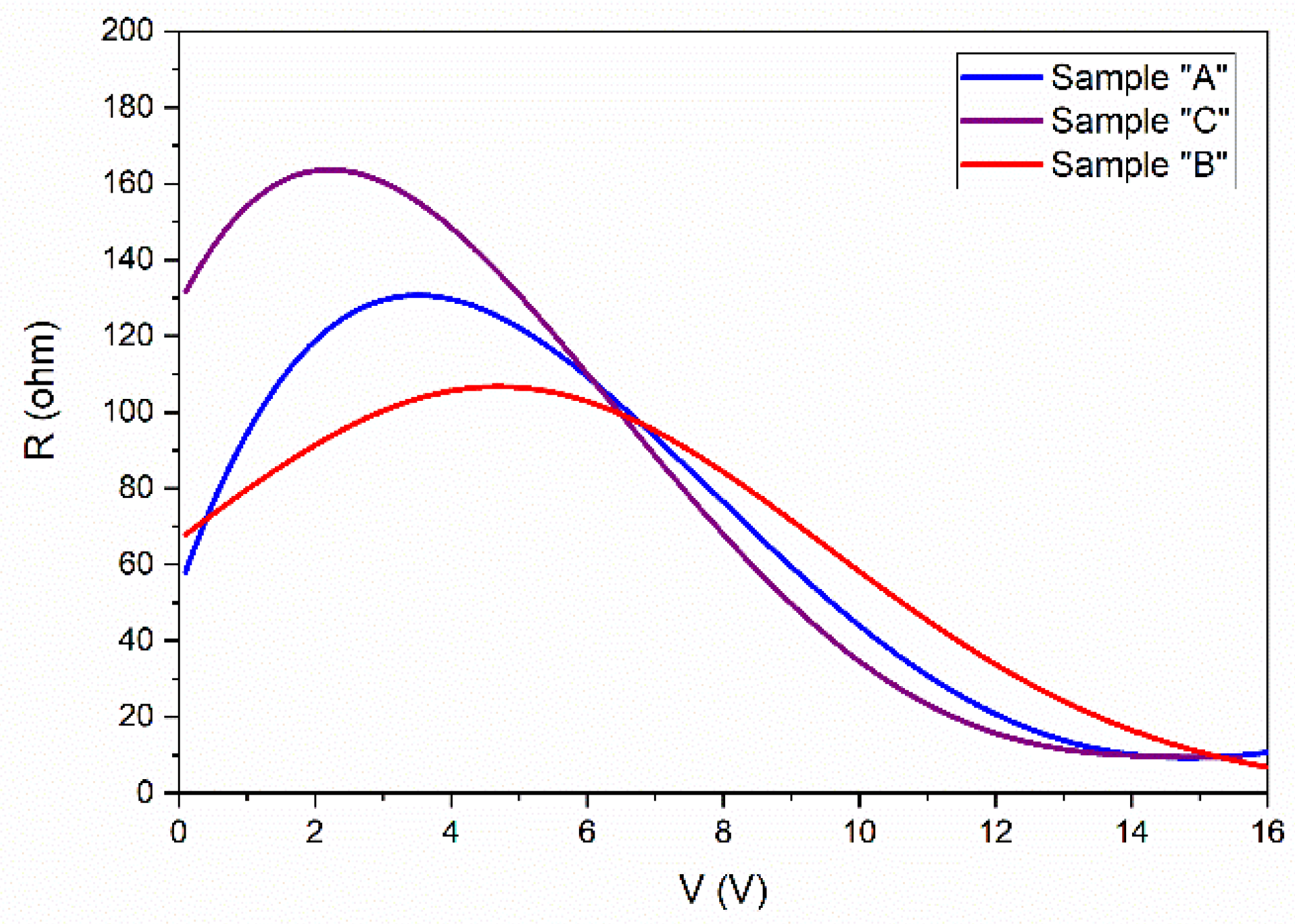 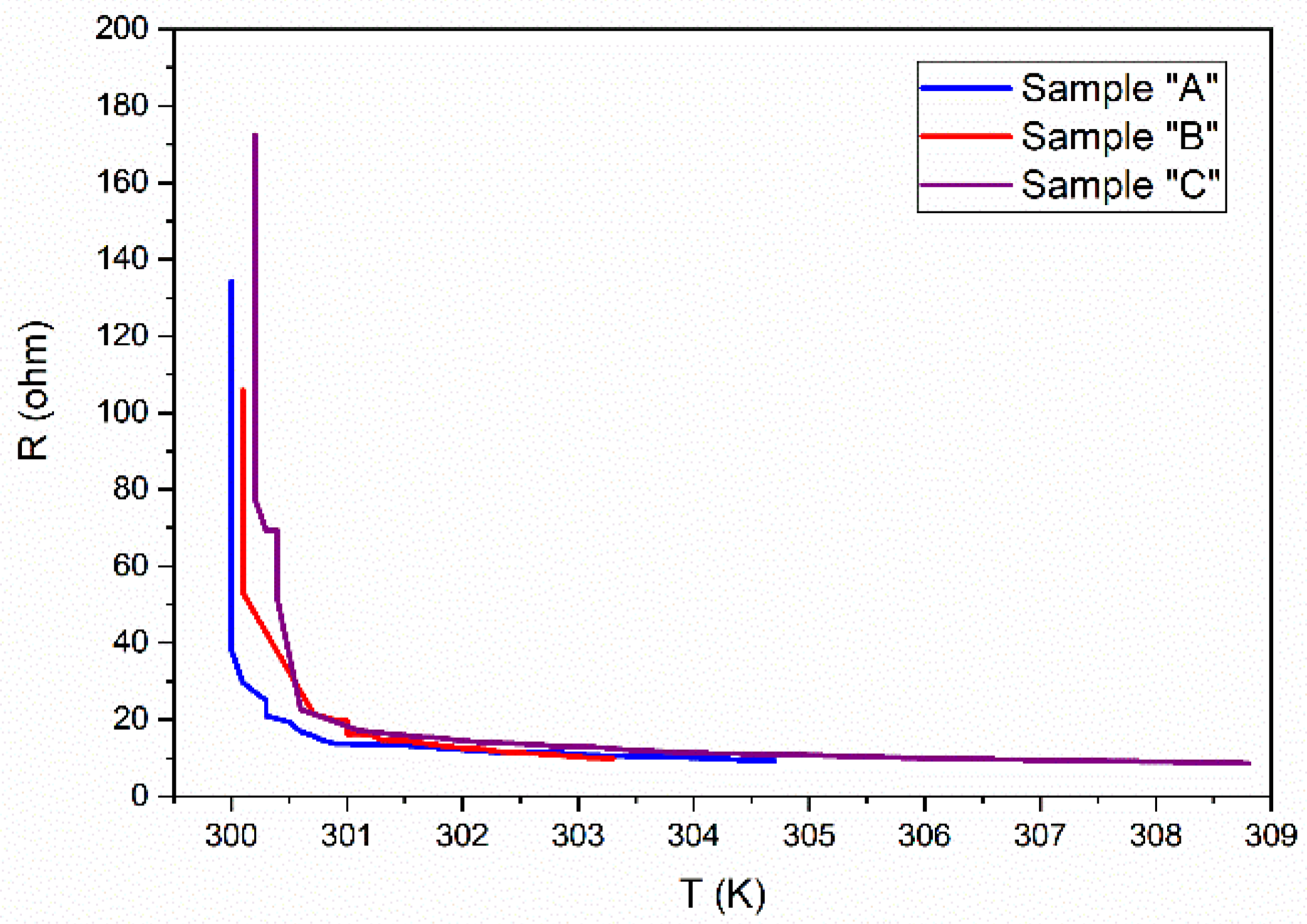 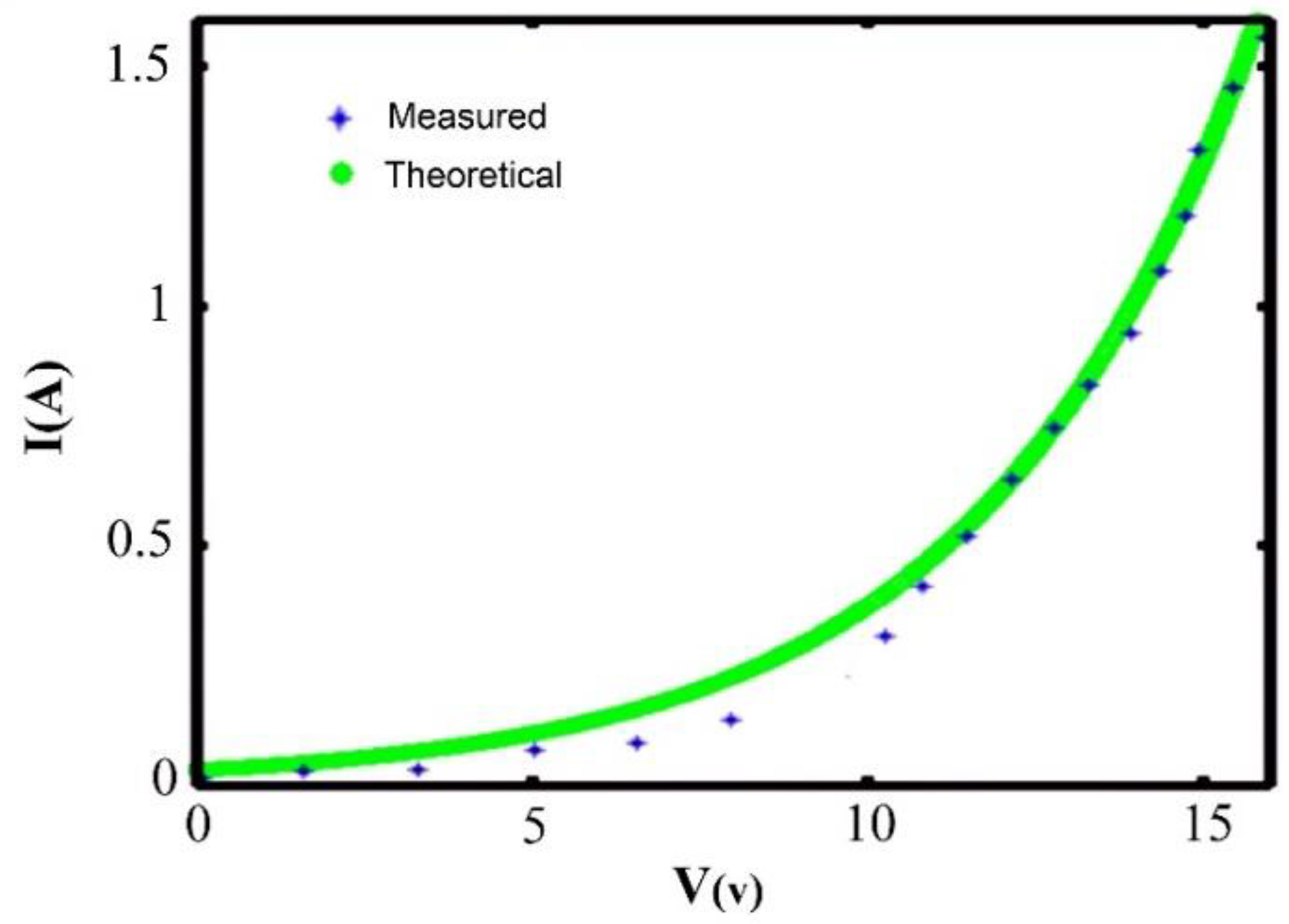