Currently, X-ray photoelectron spectroscopy (XPS) is widely used to characterize the nanostructured material surface. The ability to determine the atom distribution and chemical state with depth without the sample destruction is important for studying the internal structure of the coating layer several nanometers thick, and makes XPS the preferable tool for the non-destructive testing of nanostructured systems. In this work, ultra-soft X-ray spectroscopy methods are used to study hidden layers and interfaces of pyrolytic tungsten carbide nanoscale coatings on the multi-walled carbon nanotube (MWCNT) surfaces. XPS measurements were performed using laboratory spectrometers with sample charge compensation, and Near Edge X-ray Absorption Fine Structure (NEXAFS) studies using the Russian–German dipole beamline (RGBL) synchrotron radiation at BESSY-II. The studied samples were tested by scanning and transmission electron microscopy, X-ray diffractometry, Raman scattering and NEXAFS spectroscopy. It was shown that the interface between MWCNT and the pyrolytic coating of tungsten carbide has a three-layer structure: (i) an interface layer consisting of the outer graphene layer carbon atoms, forming bonds with oxygen atoms from the oxides adsorbed on the MWCNT surface, and tungsten atoms from the coating layer; (ii) a non-stoichiometric tungsten carbide WC1-x nanoscale particles layer; (iii) a 3.3 nm thick non-stoichiometric tungsten oxide WO3-x layer on the WC1-x/MWCNT nanocomposite outer surface, formed in air. The tungsten carbide nanosized particle’s adhesion to the nanotube outer surface is ensured by the formation of a chemical bond between the carbon atoms from the MWCNT upper layer and the tungsten atoms from the coating layer. View Full-Text
Keywords: XPS; NEXAFS; TEY; MWCNT; WC1-x/MWCNTs; MOCVD XPS; NEXAFS; TEY; MWCNT; WC1-x/MWCNTs; MOCVD
►▼ Show Figures 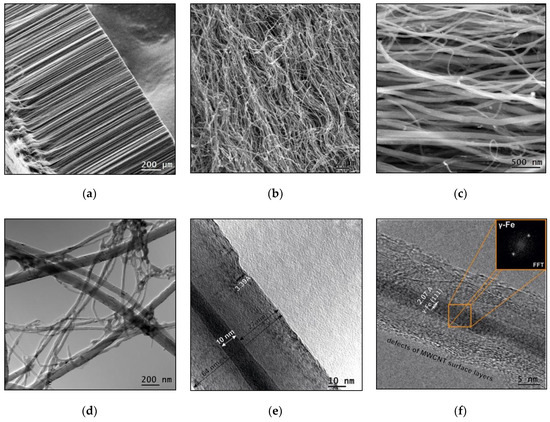