Teleseismic Tomography for Imaging the Upper Mantle Beneath Northeast China

Tomographic imaging technology is a geophysical inversion method. According to the ray scanning, this method carries on the inversion calculation to the obtained information, and reconstructs the image of the parameter distribution rule of elastic wave and electromagnetic wave in the measured range, so as to delineate the structure of the geological body. In this paper, teleseismic tomography is applied by using seismic travel time data to constrain layered crustal structure where Fast Marching Methods (FMM) and the subspace method are considered as forward and inverse methods, respectively. Based on the travel time data picked up from seismic waveform data in the study region, the P-wave velocity structure beneath Northeast China down to 750 km is obtained. It can be seen that there are low-velocity anomalies penetrating the mantle transition zone under the Changbai volcano group, Jingpohu Volcano, and Arshan Volcano, and these low-velocity anomalies extend to the shallow part. In this paper, it is suggested that the Cenozoic volcanoes in Northeast China were heated by the heat source provided by the dehydration of the subducted Pacific plate and the upwelling of geothermal matter in the lower mantle. The low-velocity anomaly in the north Songliao basin does not penetrate the mantle transition zone, which may be related to mantle convection and basin delamination. According to the low-velocity anomalies widely distributed in the upper mantle and the low-velocity bodies passing through the mantle transition zone beneath the volcanoes, this study suggests that the Cenozoic volcanoes in Northeast China are kindred and have a common formation mechanism.
Keywords: teleseismic tomography; Fast Marching Methods; subspace method; Northeast China teleseismic tomography; Fast Marching Methods; subspace method; Northeast China

FMM is an efficient numerical algorithm for solving the Eikonal equation, which belongs to a nonlinear partial differential equation and can be considered as an approximate wave equation. The Eikonal equation can be expressed as:
The physical meaning of the result in the interface evolution problem is the shortest time that it takes for the curve to reach every point in the calculation domain at the velocity . Tracking the level set of t at different heights, it can always give a position of time evolution curve. When F = 1, the solution of the equation represents the distance field in the calculation domain, which is the so-called signed distance function.
FMM uses a special difference quotient instead of the derivative, which can be expressed as the following formula in the three-dimensional case. where is the first-order forward difference operator for the independent variable x, and is the first-order backward difference operator for the independent variable x.
Under the three-dimensional condition, the cell is a cube, in which , , are the grid points. At the same time, the following formula can be obtained.
The solution of Equation (2) can be expressed as:

In many tomographic methods, there are some one-dimensional subspace methods, such as the steepest descent method and conjugate gradient method are all one-dimensional subspace methods, and these methods only perform a line minimization at each iteration. Therefore, we need to consider constructing a subspace method, which can simultaneously perform the minimization along the search direction that together span a subspace of the model space, as shown in Figure 1. According to the above reasons, the subspace iteration method is selected for inversion in this paper.
The subspace method limits the minimization of the quadratic approximation of the objective function to an n-dimensional subspace of the model space, so that the perturbation occurs in the space spanned by a set of n M-dimensional basis vectors :
μj is the component which determines the length of the corresponding vector aj that minimizes the quadratic form of in the space spanned. A is the M × n projection matrix.
If the objective function is smooth enough, the following formula can be obtained: where and are gradient vector and Hessian matrix, respectively. Their expression can be expressed as: where is the Frechet derivative matrix of partial derivatives which is calculated during the solution of the forward modeling. is a data covariance matrix. is a priori model covariance matrix. is referred to as the damping factor.
Through the above formula, the following formula can be obtained: and locating the minimum of with respect to : for q = 1, …, n. can be expressed as: where , and :
At present, there are two popular methods to evaluate the quality of travel time tomographic solution: detection board test and recovery test. The former adds the positive and negative phase anomalies with the same value to the initial model, and then calculates the path and travel time by forward modeling. The resultant relative travel time residual is obtained by the difference between the results and the travel time of the initial model. Then, the initial model is inverted by the resultant relative travel time residual. If the results show a clear and recognizable “checkerboard” between the positive and negative phases, it can be proved that the resolution meets the requirements.
The latter takes the final inversion model as the initial model and performs the inversion again. If the result is similar to the previous one, it is considered that the two are relatively consistent, which proves the reliability of inversion. In this paper, we use these two methods to select the appropriate initial model grid and verify the reliability of the final results.

In this paper, the global average velocity model is used as the initial velocity model to calculate the theoretical velocity of each node in the model. This study also tested an initial model, in which the average spacing of each station in the array is 0.8° × 0.8°. The vertical direction has been tested for 50 km.

The test board test (template/chessboard test) is a classic process used to evaluate the reliability of solutions, as shown in Figure 7. This method can add regular positive and negative errors to the initial model to affect the velocity distribution at the nodes and get the synthetic data model. The ray path and travel time residuals are calculated by adding the source information and station location, and then the initial model is inverted by using travel time residuals. Finally, the rationality of the initial model grid setting can be known by comparing the resulting model with the synthetic data model.
In the test of the test board, the horizontal grids are all selected with a distribution interval of 0.8° × 0.8°. The model with a depth of 50 km is tested, and the input models are respectively added with a velocity disturbance of ±4% and a random error of 0.1%.
In terms of the effect of the test results as shown in Figure 8, the resolution of this study is relatively high for the upper mantle and mantle transition zone, especially for Changbai Mountain and Songliao basin, the key area of this study, which have better test results at different depths. From the results, the reliability of imaging results is high. Therefore, in this paper we select the 0.8° × 0.8° × 50 km grid as parameters, the horizontal resolution is about 1.6° × 1.6°, and the vertical resolution is about 100 km.

Conceptualization, methodology, investigation and writing, Z.J.; formal analysis, project administration, G.Z. All authors have read and agreed to the published version of the manuscript. 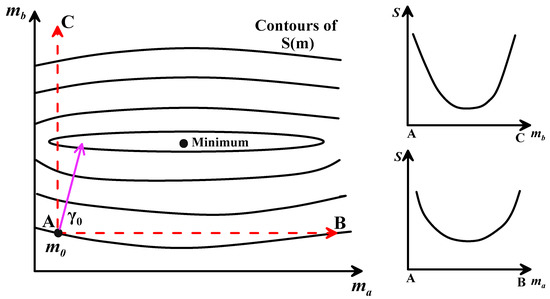 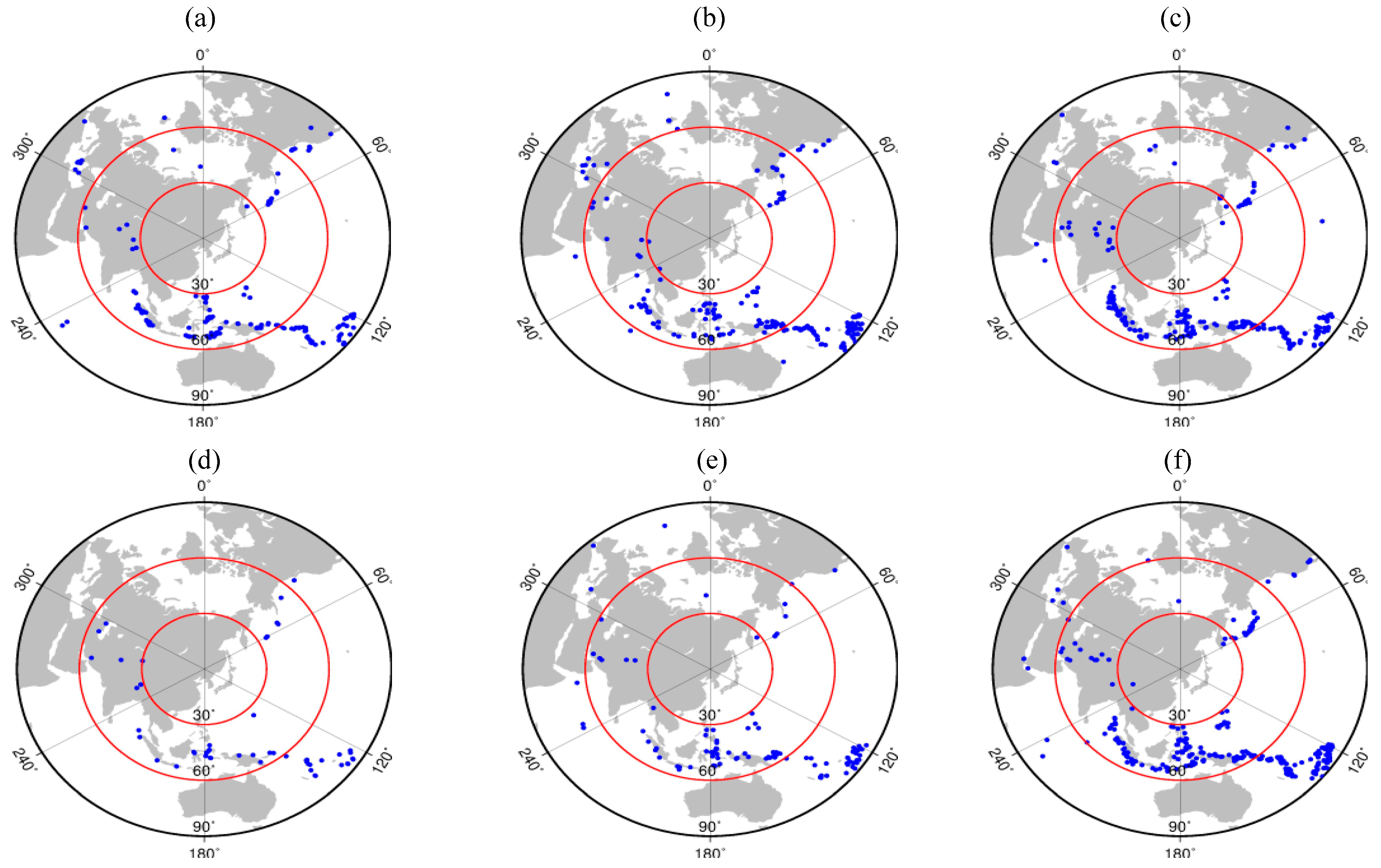 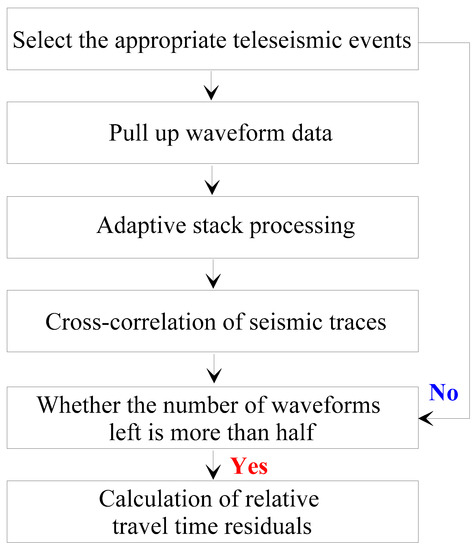 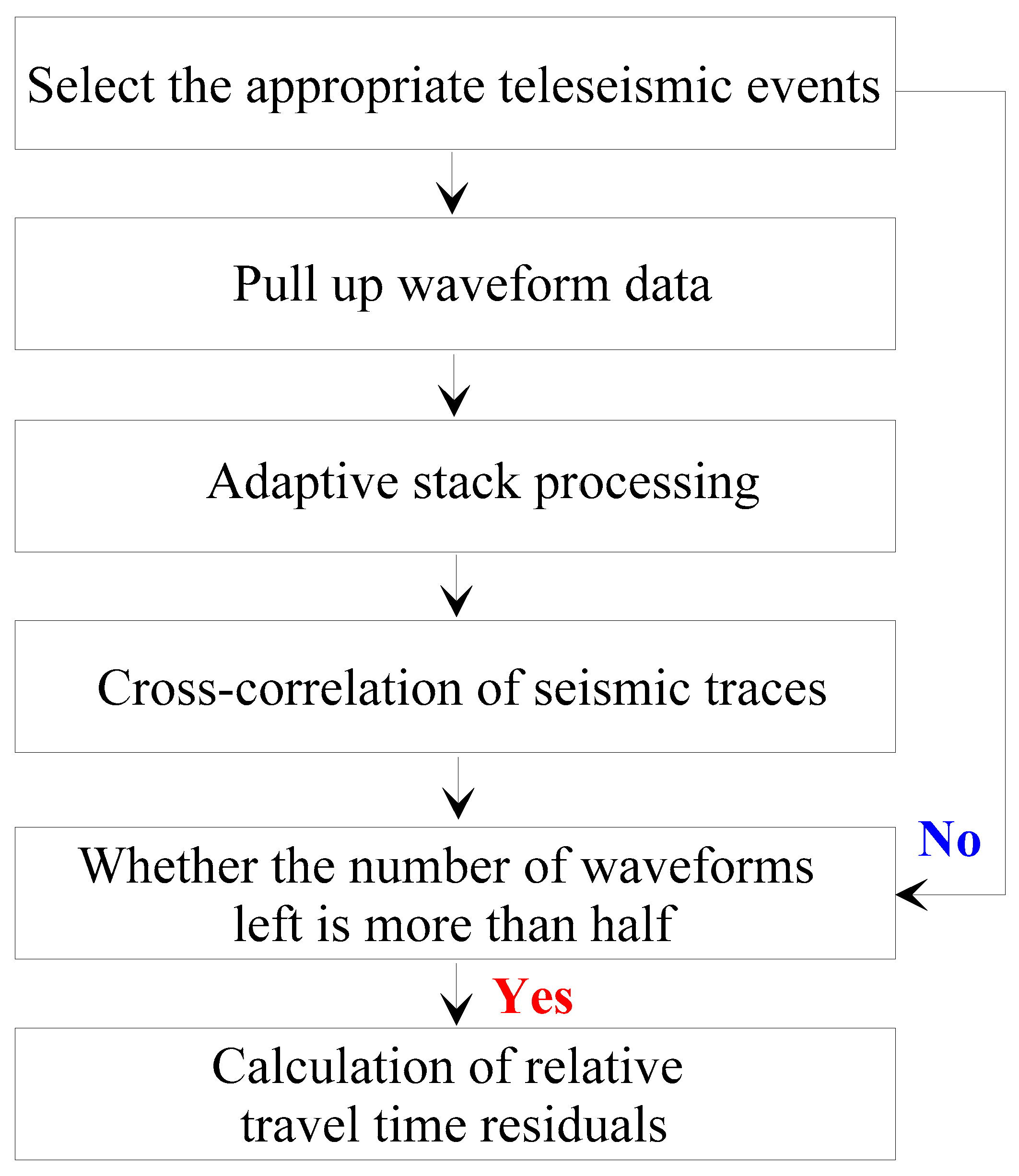 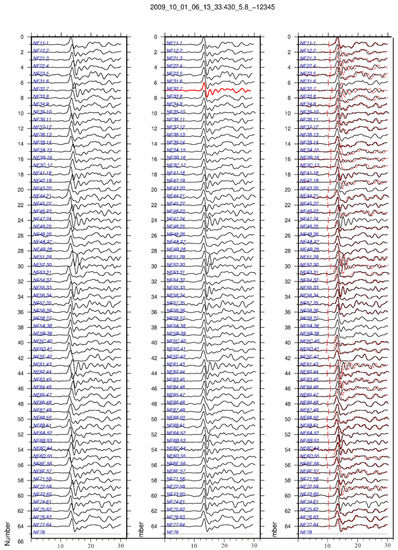 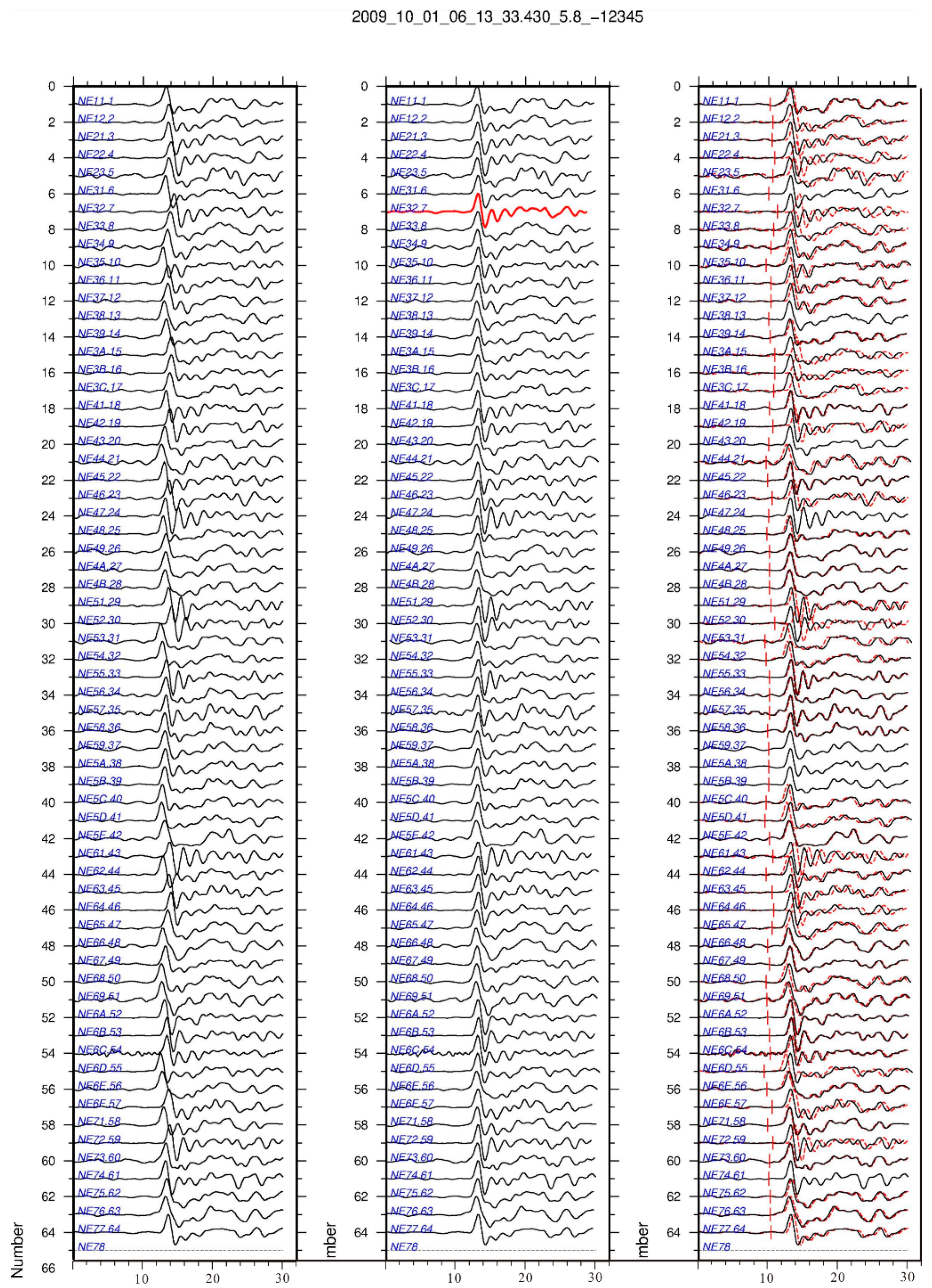 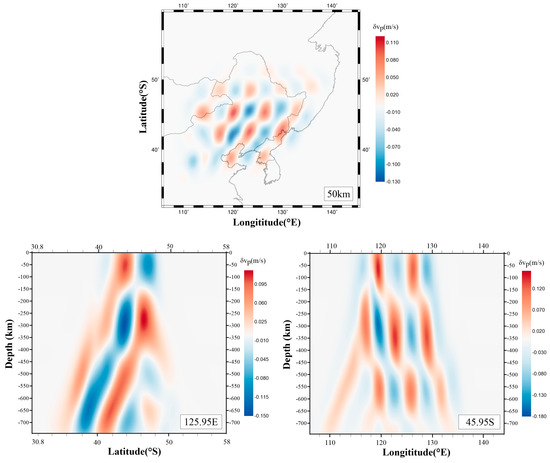 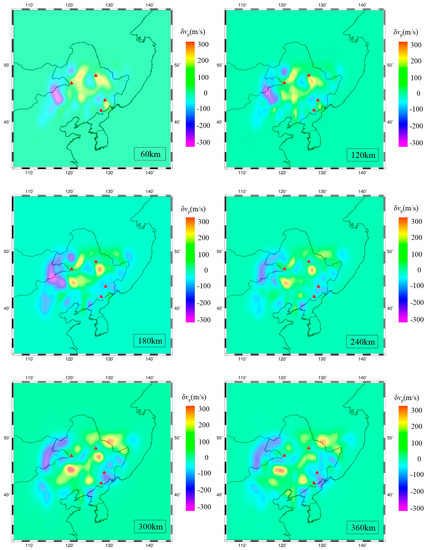 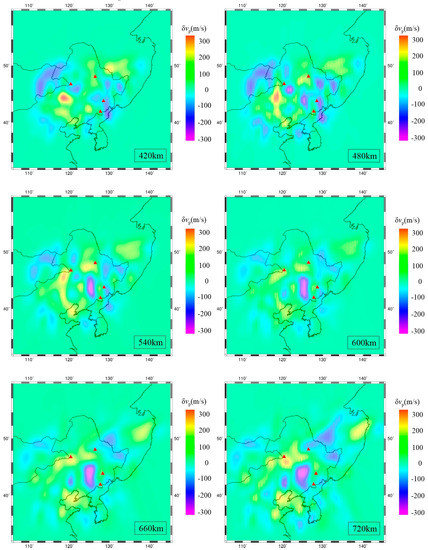 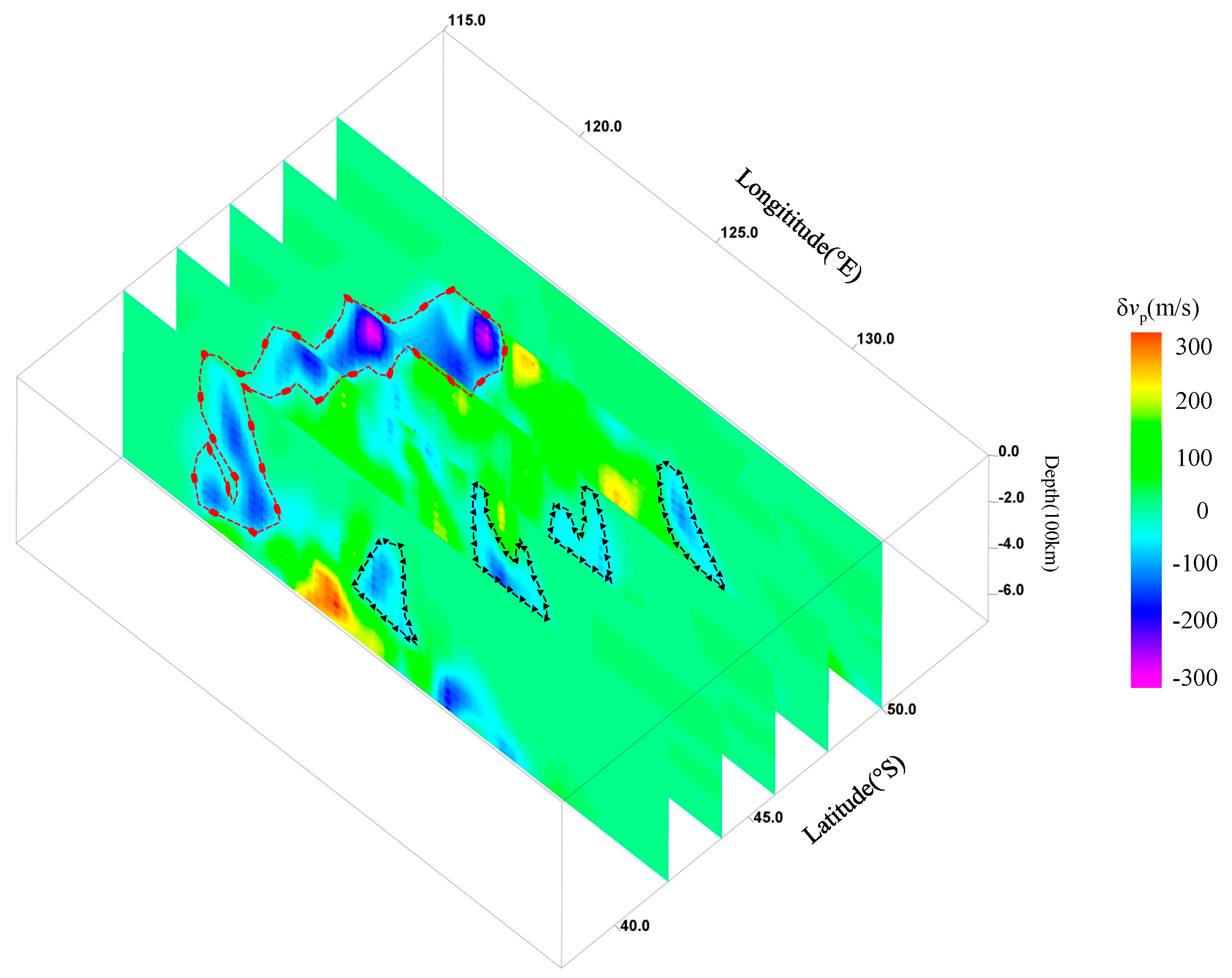 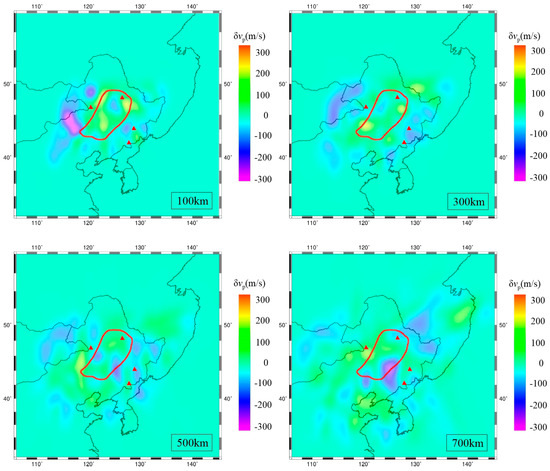