Platelet-Rich Plasma (PRP) in Dental Extraction of Patients at Risk of Bisphosphonate-Related Osteonecrosis of the Jaws: A Two-Year Longitudinal Study

Dental extraction has often been described as the main trigger event of osteonecrosis of the jaws (ONJ). This longitudinal hospital-based study aimed to evaluate the outcome at 2 years of a standardized medical-surgical protocol for dental extraction, combined with platelet rich-plasma (PRP) application, compared with conventional protocol not combined with PRP or any other autologous platelet concentrate in cancer (ONC) and osteometabolic (OST) patients, at risk of bisphosphonate (BP)-related ONJ. Twenty patients were consecutively recruited: six received BPs for cancer skeletal-related events (34.17 ± 19.97 months), while fourteen received BPs for metabolic bone disease (74.5 ± 34.73 months). These patients underwent a standardized protocol for dental extraction, combined with autologous PRP application in the post-extraction socket. A total of 63 dental extractions were performed (24 and 39 in ONC and OST groups, respectively). As controls, historical cases, derived from the literature and including 171 ONC and 734 OST patients, were considered. The outcome of the surgical treatment was successful in all patients treated with PRP: two years after extraction, no patient had clinical or radiological signs of ONJ. When this datum was compared with historical controls, no statistically significant differences were found (p > 0.1). The combination of a standardized medical-surgical protocol with PRP application may contribute to limit the occurrence of BP-related ONJ, in both ONC and OST patients. Additional prospective studies with a larger patient sample are necessary to confirm this datum. View Full-Text
Keywords: platelet-rich plasma; PRP; osteonecrosis of the jaws; ONJ; bisphosphonates; dental extraction platelet-rich plasma; PRP; osteonecrosis of the jaws; ONJ; bisphosphonates; dental extraction
►▼ Show Figures 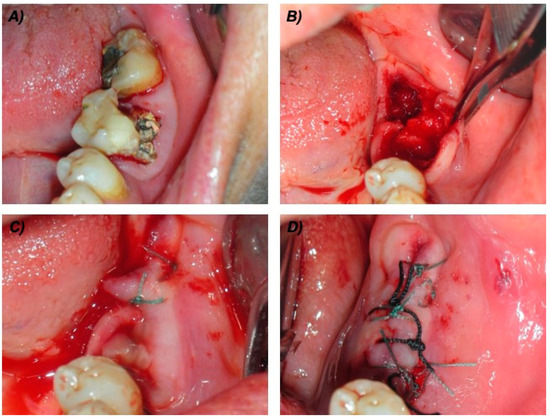