Earthquake-induced structural pounding may cause major damages to structures, and therefore it should be prevented. This study is focused on using an artificial neural network (ANN) method to determine the sufficient seismic gap in order to avoid collisions between two adjacent buildings during seismic excitations. Six lumped mass models of structures with a different number of stories (from one to six) have been considered in the study. The earthquake characteristics and the parameters of buildings have been defined as inputs in the ANN analysis. The required seismic gap preventing pounding has been firstly determined for specified structural arrangements and earthquake records. In order to validate the method for other structural parameters, the study has been further extended for buildings with different values of height, mass, and stiffness of each story. Finally, the parametric analysis has been conducted for various earthquakes scaled to different values of the peak ground acceleration (PGA). The results of the verification and validation analyses indicate that the determined seismic gaps are large enough to prevent structural collisions, and they are just appropriate for all different structural arrangements, seismic excitations, and structural parameters. The results of the parametric analysis show that the increase in the PGA of earthquake records leads to a substantial, nearly uniform, increase in the required seismic gap between structures. The above conclusions clearly indicate that the ANN method can be successfully used to determine the minimal distance between two adjacent buildings preventing their collisions during different seismic excitations. View Full-Text
Keywords: seismic gap; structural pounding; earthquakes; artificial neural network seismic gap; structural pounding; earthquakes; artificial neural network
►▼ Show Figures 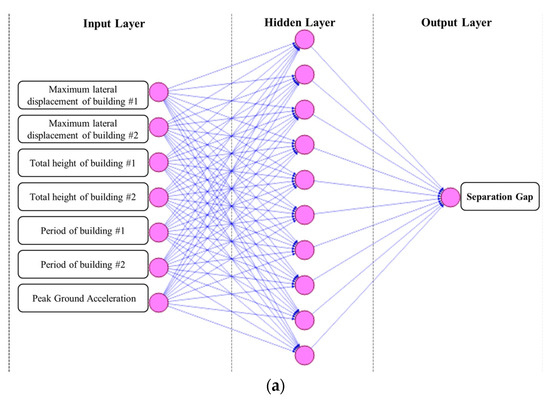