Due to their excellent versatility and durability, plastics have come into widespread use, and their global production has increased markedly since the beginning of mass production, from 1.5 million tonnes in 1950 to almost 360 million tonnes in 2018 [1]. Although plastics have benefited our lives in cost and convenience, the indiscriminate disposal of end-of-life plastics poses serious environmental problems, as plastics progressively fragment into smaller pieces once they reach and accumulate in the aquatic environment due to their low biodegradability.
Global concerns have been raised in recent years over the rampant proliferation of plastic debris in the environment, with particular attention paid to microplastics, which are small polymer particles less than 5 mm in size [2]. Microplastic occurrence has been extensively documented in freshwater and marine environments, such as rivers [3,4], estuaries [5,6], shorelines [7,8] and oceans [9,10]. Given the small size and ubiquity of microplastics, the topic of their effects on global ecosystems has been brought to the forefront. Recently, the introduction of microplastics into the food web via nonselective uptake, unintentional ingestion and ventilation by aquatic organisms was proven by microplastics recovered from the gastrointestinal tracts and/or gills of plankton (e.g., copepods and euphausiids) [11], filter feeders (e.g., bivalves) [12] and fish (e.g., solenette, dragonet and poor cod) [13]. Multiple laboratory studies have further indicated the bottom-up propagation of microplastics across trophic levels and their accumulation in predators [14,15,16]. Ingestion of microplastics may not only exert various physical impacts, such as external/internal abrasion, intestinal obstruction, reduced energy metabolism and reproductive malfunctioning, on aquatic biota [17], but also facilitate the transfer and absorption of chemicals, including hydrophobic organic contaminants (HOCs), from the environment to biota due to the favourable surface-area-to-volume ratio of microplastics [18].
Knowledge of the potential human health impacts associated with the uptake of microplastics is limited at the present stage. Questions have been raised concerning the possible human exposure pathways of microplastics [19]. In addition to commercially available seafoods, microplastics have been observed in table salts [20], beer [21], honey and sugar [22], and even drinking water (i.e., treated tap water and bottled water) [23,24]. In 2018, the first study looking into the occurrence of microplastics in tap water reported that more than one-fifth of the tap water samples from 14 countries tested positive for micro-scaled plastic particles, with a vast majority (98.3%) of microplastics were fibres [25]. Given the presence of microplastics in food, it is possible that humans are exposed to microplastics through ingesting microplastic-contaminated food. However, information related to the microplastic concentration in Hong Kong’s tap water remains lacking, exposing the need to understand the presence of microplastics throughout the water supply distribution chain with respect to human exposure and, more broadly, to safeguard drinking water quality.
In Hong Kong, the growth of the urban population and economy has resulted in an increased freshwater demand, with an annual consumption that reached 1010.75 million m3 from 1 April 2018 to 31 March 2019 [26]. Approximately 99.9% of the Hong Kong population receives tap water from surface water sources, hereafter referred to as raw water. Owing to its freshwater self-insufficiency, Hong Kong derives approximately 70% of its raw water from the East River (Dongjiang) in Guangdong Province and the rest from impounding reservoirs. There are now 20 water treatment works (WTWs) in Hong Kong with a total capacity for treating 5.31 million m3 of water each day. Raw water is subjected to a five-step treatment process, which comprises coagulation, flocculation, sedimentation, filtration (i.e., gravity and biological filtration) and disinfection, before being delivered to consumers through a designated distribution system (Figure 1).
The purpose of this study was to investigate the presence of microplastics in Hong Kong’s tap water. The microplastics in 110 tap water samples collected from urban sources in Hong Kong were quantified and identified. This study aimed (1) to quantify microplastics in Hong Kong’s tap water; (2) to classify microplastics by size, shape and colour; and (3) to discuss the potential sources of microplastics in Hong Kong’s tap water.

Tap water samples were obtained from 110 urban sites in Hong Kong. The sites included public (i.e., libraries, markets, sports centres, toilets and parks) and private (i.e., shopping centres in public housing estates) properties. Since public and private properties share the same freshwater distribution system with consumer households, obtaining samples from both public and private properties enables the examination of microplastics in Hong Kong’s tap water, especially water supplied to households and workplaces that is intended for human consumption. The locations of all sampling sites are specified in Table S1.

Sampling was conducted from March to April 2018. A total of 110 tap water samples were collected following the method developed by Kosuth, Mason and Wattenberg [25]. Tap water was sampled from a filter-unattached conventional tap after running the tap at a maximum flow for a minimum of 1 min. Each sample was collected by filling a 1 L high-density polyethylene sample bottle, which was prerinsed three times with filtered deionized water, to the point of overflowing. The bottle was capped tightly and labelled with the sampling location, date and time. All samples were delivered to the laboratory within 24 h and stored at 4 °C before analysis.

In the laboratory, each sample was vacuum filtered over a 2.7 μm pore glass microfibre filter (Chmlab Group, Barcelona, Spain) immediately after uncapping the bottle. The wet filter was subjected to Rose Bengal staining according to the method of Liebezeit and Libezeit [21] to aid in the subsequent microplastic identification. A 2 mL solution of Rose Bengal dye at a concentration of 200 mg L−1 was added to the filter to stain the residual natural organic particles. After 5 min of impregnation, the dye was filtered off with filtered deionized water, and the filter was oven dried at 60 °C for 15 min in a covered glass petri dish.
All dried filters were visually analysed under a stereomicroscope (Olympus, Tokyo, Japan; Model: SZ61) at up to 45X. The nonstained particles with consistent thickness and colour that did not deform when pressed with tweezers were considered plastics [28]. Particle size measurements were carried out to measure the lengths of fibres and the largest diameter of nonfibrous particles using an image software. Images of identified plastic particles were captured and documented before the particles were divided into five size classes: (1) 2.7–149 μm, (2) 150–499 μm, (3) 500–999 μm, (4) 1000–2499 μm and (5) 2500–5000 μm. The plastic particles were categorized into four morphotypes: (1) fibre (FB), (2) film (FM), (3) fragment (FM) and (4) pellet (PL) according to the identification criteria outlined in Cheung, Cheung and Fok [29]. The colours of the microplastic particles were also recorded. The whole process was completed within 15 min for each sample.

The abundance of microplastics in the tap water from each sampling site was calculated by dividing the number of identified microplastics by the total volume of tap water. The values of microplastic abundance were expressed in terms of the number of microplastics per litre of tap water (items L−1, hereafter n L−1). All statistical tests were performed via SPSS software, version 25.0. The number of microplastics in each size, morphotype and colour category was reported using descriptive statistics. To assess the normality of the data set, the Shapiro–Wilk test was adopted, and the results presented a non-normal distribution (p = 0.000). In addition, the nonparametric Kruskal–Wallis H test, a multiple–mean comparison, was used to detect the differences in the microplastic abundances. If the test showed significant differences, the Mann–Whitney U test was applied for pairwise comparisons to reveal the significantly differing groups. In all cases, the results obtained with p levels < 0.05 were considered statistically significant.

To prevent samples from being contaminated throughout the processing and analysis of samples from external sources (i.e., airborne microplastics), the following measures were implemented: All laboratory personnel were required to wear button-front cotton lab coats and powder-free nitrile-coated gloves when performing any laboratory tasks. To remove any contamination by airborne microplastics, work surfaces were thoroughly cleaned. The deionized water was previously filtered through a 2.7 μm pore glass microfibre filter (Chmlab Group, Spain). All glassware and utensils were thoroughly rinsed three times with filtered deionized water and properly kept in a clean metal box before use and covered with aluminium foil when not in use. A procedural blank soaked with filtered deionized water was placed within the laboratory on a daily basis to detect background contamination during the whole experimental period (total hours of exposure: 5.5), and the plastic particles retained on filters were counted using a stereomicroscope (Olympus, Japan; Model: SZ61).

The procedural blanks (number of blanks: n = 11) revealed a very low level of microplastic contamination throughout the 5.5-h experimental period, and only two fibres were observed, which represented < 0.01% of the total count of microplastics in all tap water samples. On average, the microplastic content in the blanks was 0.36 n hour−1 (equivalent to 0.09 n per 15 min). With a maximum processing and identification time of 15 min per sample, the consistent low level or even zero contamination was considered negligible; hence, no blank correction of the quantitative results was made.

3.2. Abundances and Morphological Characteristics of Microplastics

The abundance and morphological characteristics of microplastics in Hong Kong’s tap water have been presented in the present study. The average concentration of microplastics in the tap water ranged from 0.000 to 8.605 n L−1, with an overall mean of 2.181 ± 0.165 n L−1, indicating a minor contamination of the tap water compared with the results available in published studies. It is believed that the current levels of direct microplastic exposure via drinking water are unlikely to cause major health problems, but the potential risks to human health should not be neglected. Further research is needed to determine the routes by which microplastics enter the water treatment and distribution system and to establish standard methods for the sampling and detection of micro- and nano-plastics.

The authors would like to thank the funding support from the Research Grants Council, Government of Hong Kong SAR. 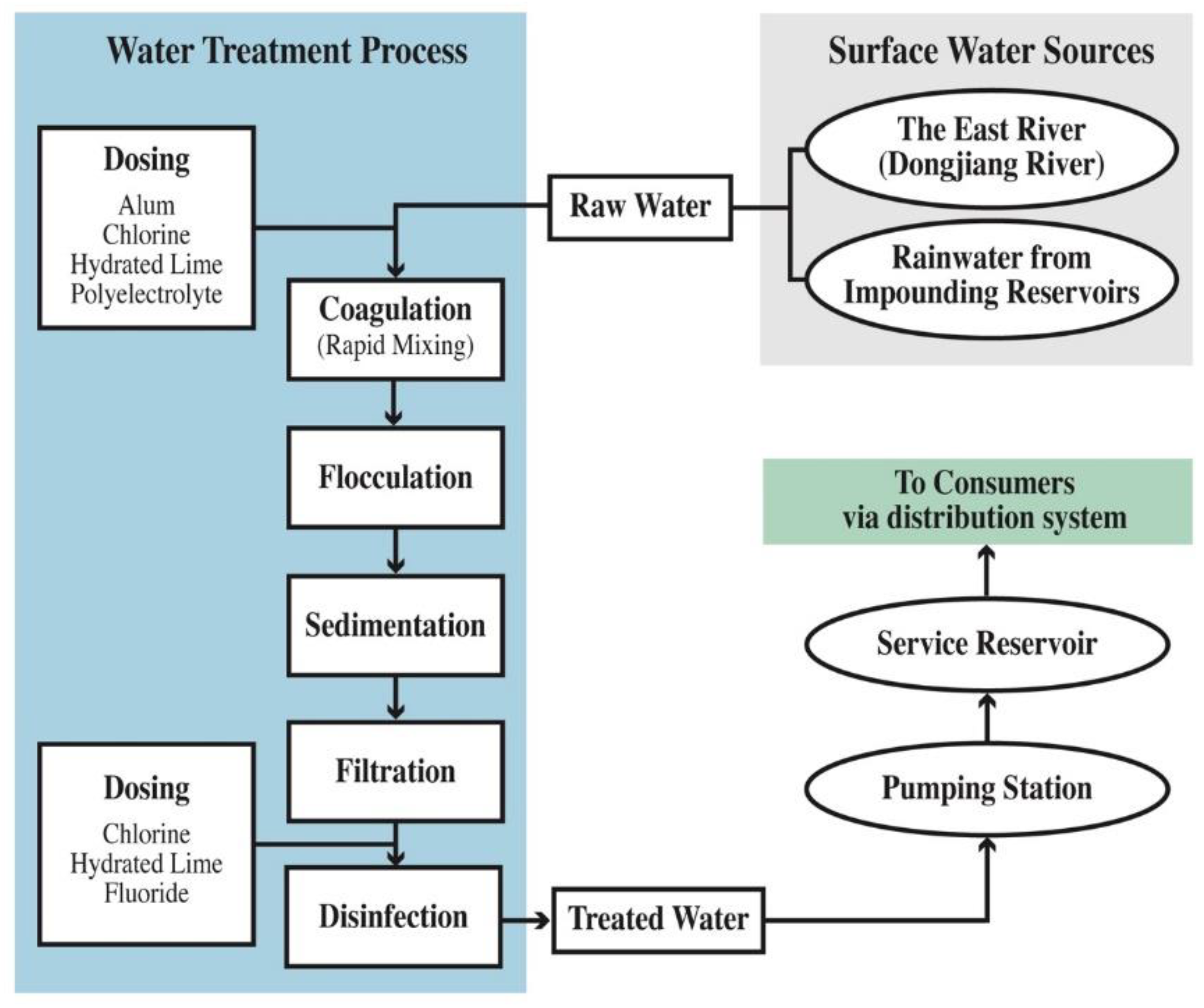 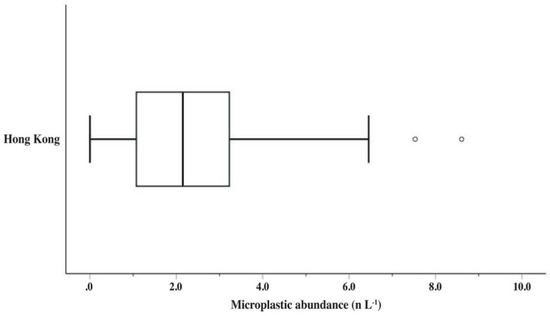 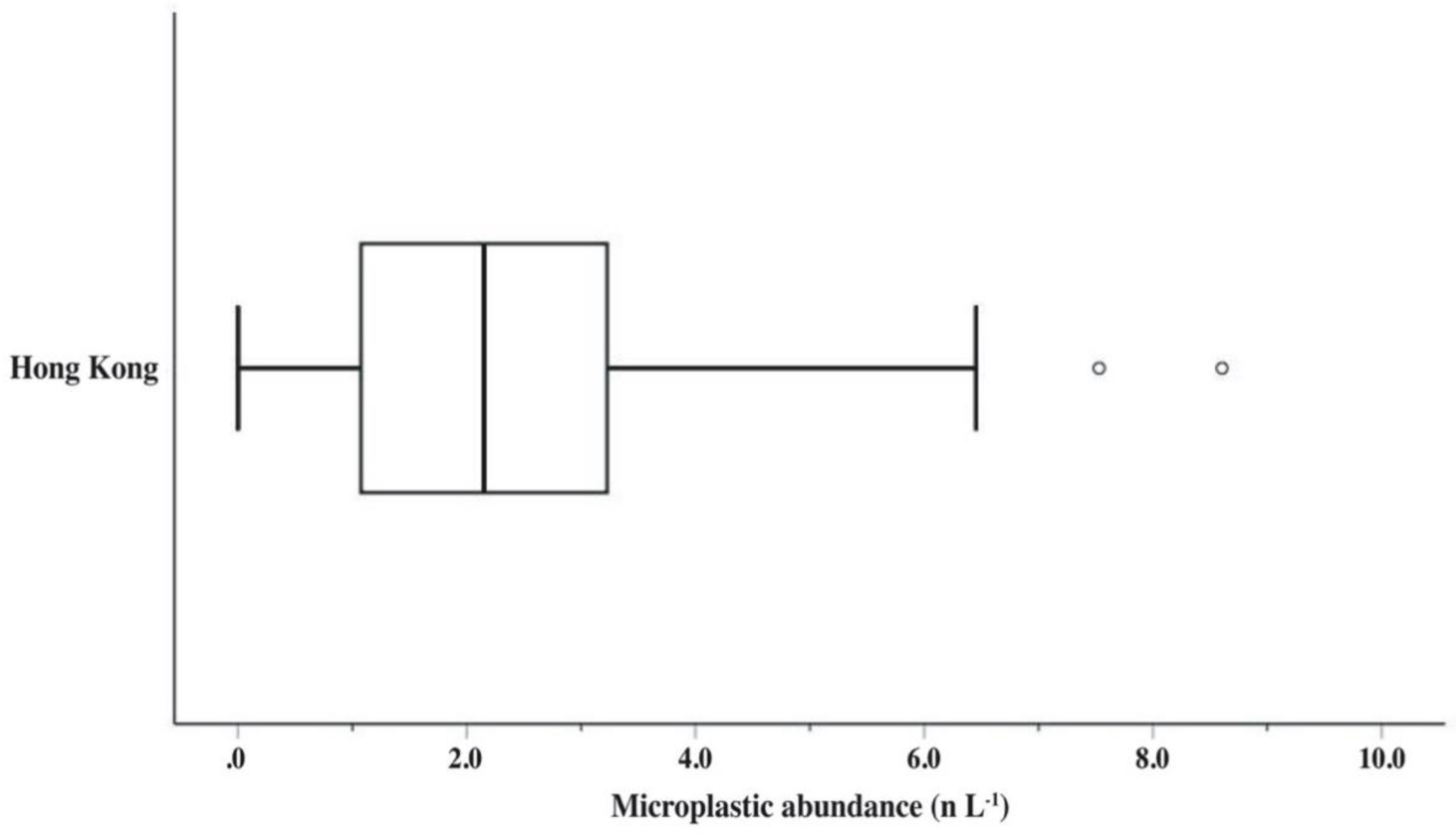