The measured results were collected from the vessel’s departure from the port. Measurement commenced at dead slow ahead of the main engine and as the engine load increased until 83 rpm. Data were collected for the 22 different running points of the low-duty turbo compressor. The measurements included gas inlet and outlet temperatures, gas inlet and outlet pressures, and the mass flow rate of the main boiler. Two mirror-oriented main boilers that consume delivered gas were placed on the vessel. The measured results are listed in Table 2 and measurement equipment was described in previous studies [42,43,44,45]. The LNG cargo consists of the following components by mass ratio [46]: CH4 (0.87955), C2H6 (0.08328), C3H8 (0.02056), C4H10i (0.00272), C4H10n (0.00400), and N2 (0.00989).
The measured values for the amperage, frequency, and the power factor were collected at the high voltage control breaker, which monitors current, frequency, and power factor value at the inlet of the electric motor (Table 3). The measured power factor was the same within the entire measured range, φ = 0.9. The electric motor speed was measured from the HIMAP M, which is a multifunctional digital protection relay with measuring functions, [47]. The maximal electric motor speed was 3585 rpm and the turbo compressor running range is 12,000 to 24,000 rpm, as per the manufacturer. From that information, we calculated the running speed of the turbo compressor using the measured electric motor speed and following relation:

4. Energy and Exergy Analysis of the Low-Duty Turbo Compressor

In the mixtures of various gases, equilibrium exists at specific temperatures and pressures. Changes in the temperature or the pressure move the gas mixture from one equilibrium state to another. In this part, we estimated the tank temperature during maneuvering and when sailing with the assumption that the mass flow rate of the main boiler is constant all the way to the discharging port for a 15-day voyage.
The equation of the state for the gas component, assuming that the component is at the same volume and temperature, of the mixture is [69,70,71]:
The specific volume is:
Substitution of Equation (23) into Equation (24) gives:
As per an additive pressure rule known as Dalton’s model, the gas mixture occupying volume V at temperature T can be expressed as the sum of the pressures exerted by the individual components:
Substitution of Equation (25) into (26) gives:
Approximation of compressibility factor Z and temperature T by the variation of the gas mixture equilibrium pressure from 0.105 to 0.125 MPa according to Equation (22) gives the following polynomials:
Finally, collecting the partial components in Equations (26)–(29) to a real mixture equation of state at equilibrium pressure gives:
In an LNG tanker, cargo tanks are filled up to 98% as required according to the Lloyd register, which is the safety margin to delay cargo tank overflowing in the case of fire [72]. However, some administrations will allow for a greater tank volume, typically 98.5%, which considers the expected boil-off of vapors from the cargo tanks during the loaded voyage, [73]. Membrane cargo tanks for a 150,000 m3 LNG carrier are built for an average daily vaporization rate of 0.15% of the total cargo [74,75]. The measured cargo tank pressure after loading and before starting the low-duty turbo compressor was 0.1097 MPa. The average time from dead slow ahead to fully maneuvering was divided into three one-hour-long steps. The last measurement of the main boiler was recorded as the constant consumption rate of the main boiler for the next 15 days of the assumed voyage. According to the given assumptions, we calculated 6559.4 kg/h available gas in the cargo tanks with 2% available volume, as shown in Figure 11. As the voyage continues, there is more available space in the cargo tanks due to gas consumption by the main boiler. As the main boilers are consuming more gas than available in the cargo tanks, one part of the gas must be evaporated in the LNG vaporizer, which has to simultaneously compensate for the lack of gas in the tanks and balance cargo tank pressure. In the case of the steady model as presented here, the vaporizer must vaporize an additional 3045 kg/h of LNG to maintain the cargo pressure in the tank. As the cargo tank pressure and liquid temperature are correlated, the cargo temperature is maintained for the entire voyage at about −161.92 to −161.85 °C. The only disturbance in the equilibrium was noticed during maneuvering, where the cargo tank pressure was not steady but dependent on the load change in the boiler. The total consumption of the cargo for the voyage with this setup was 2554 MT of LNG.
The extension of this work is to collect a few real laden passages data and to perform voyage optimization with respect to the ship speed and the obtained results of the low-duty turbo compressor exergy efficiency running zones from this analysis. According to the received results, power savings with a variety of low-duty compressor running modes will be compared. 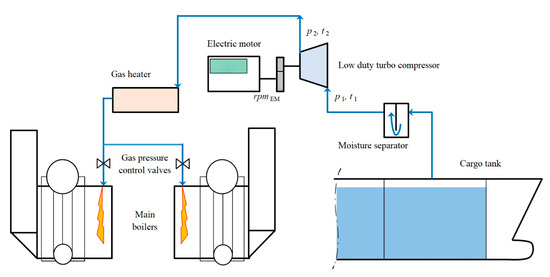 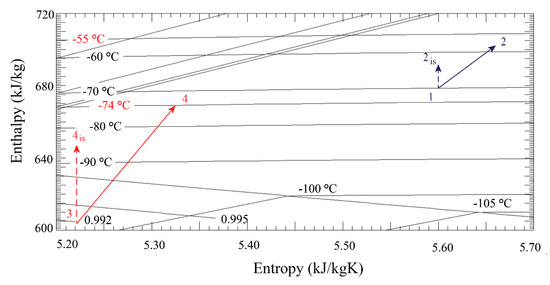 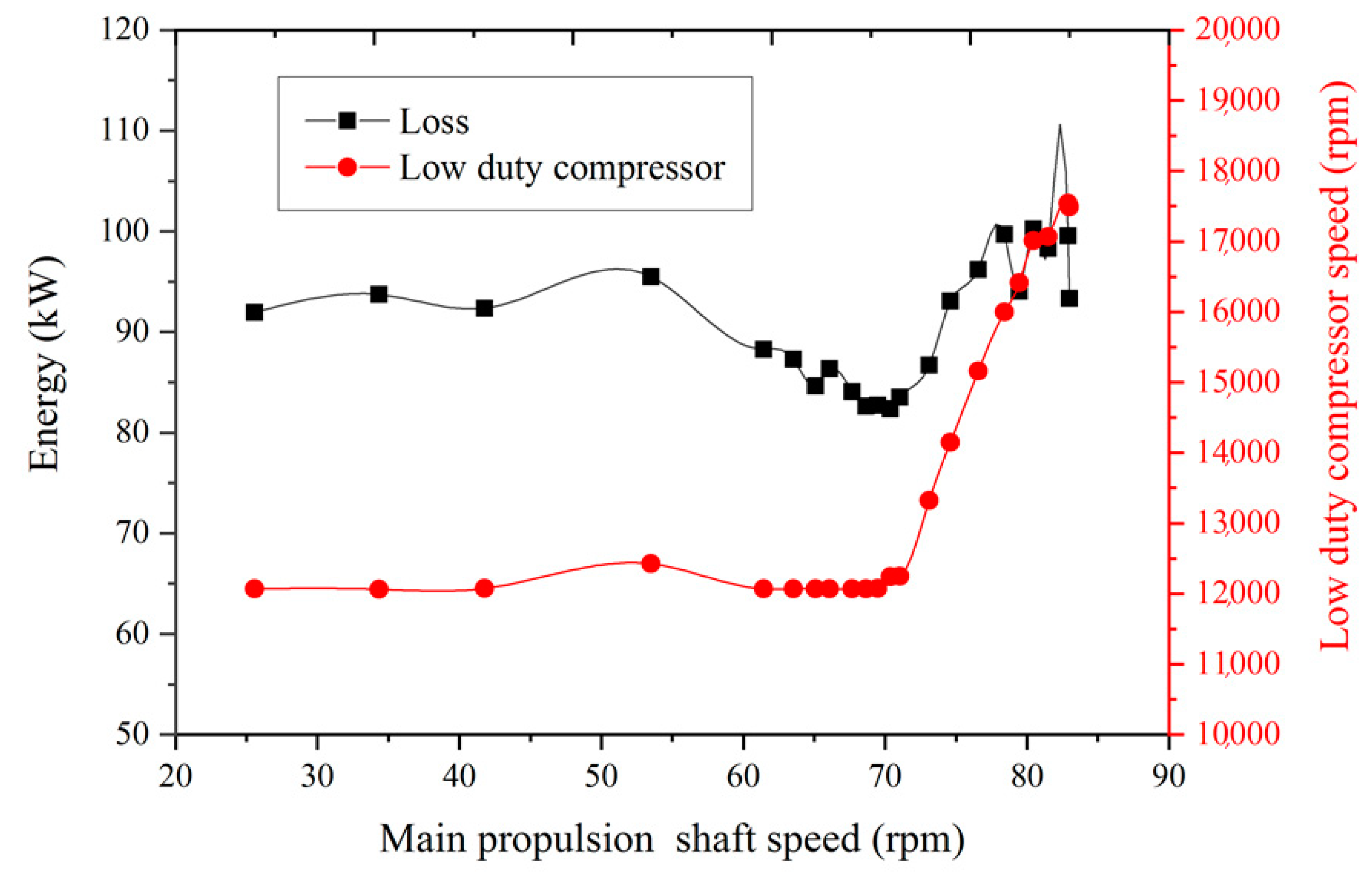 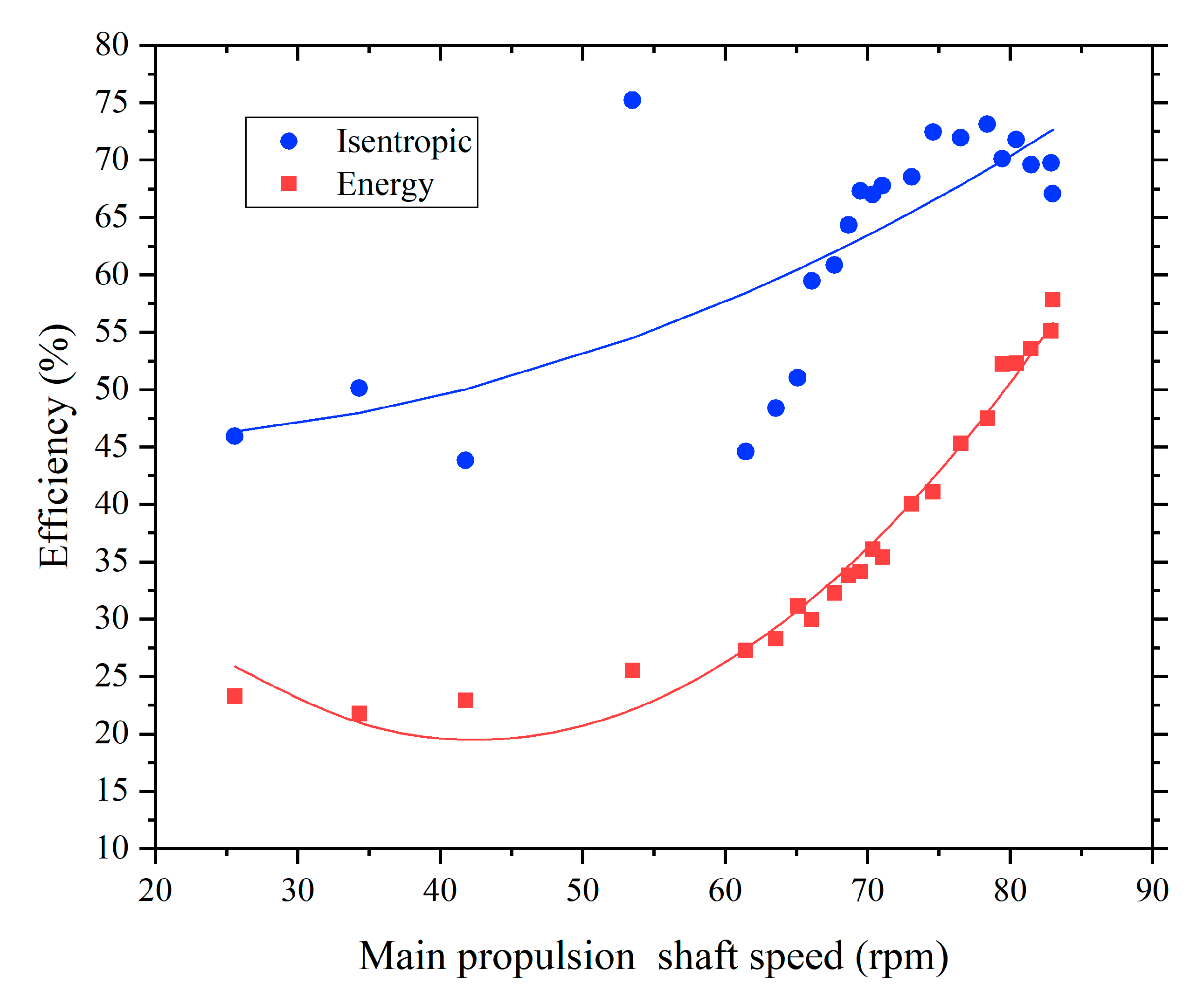 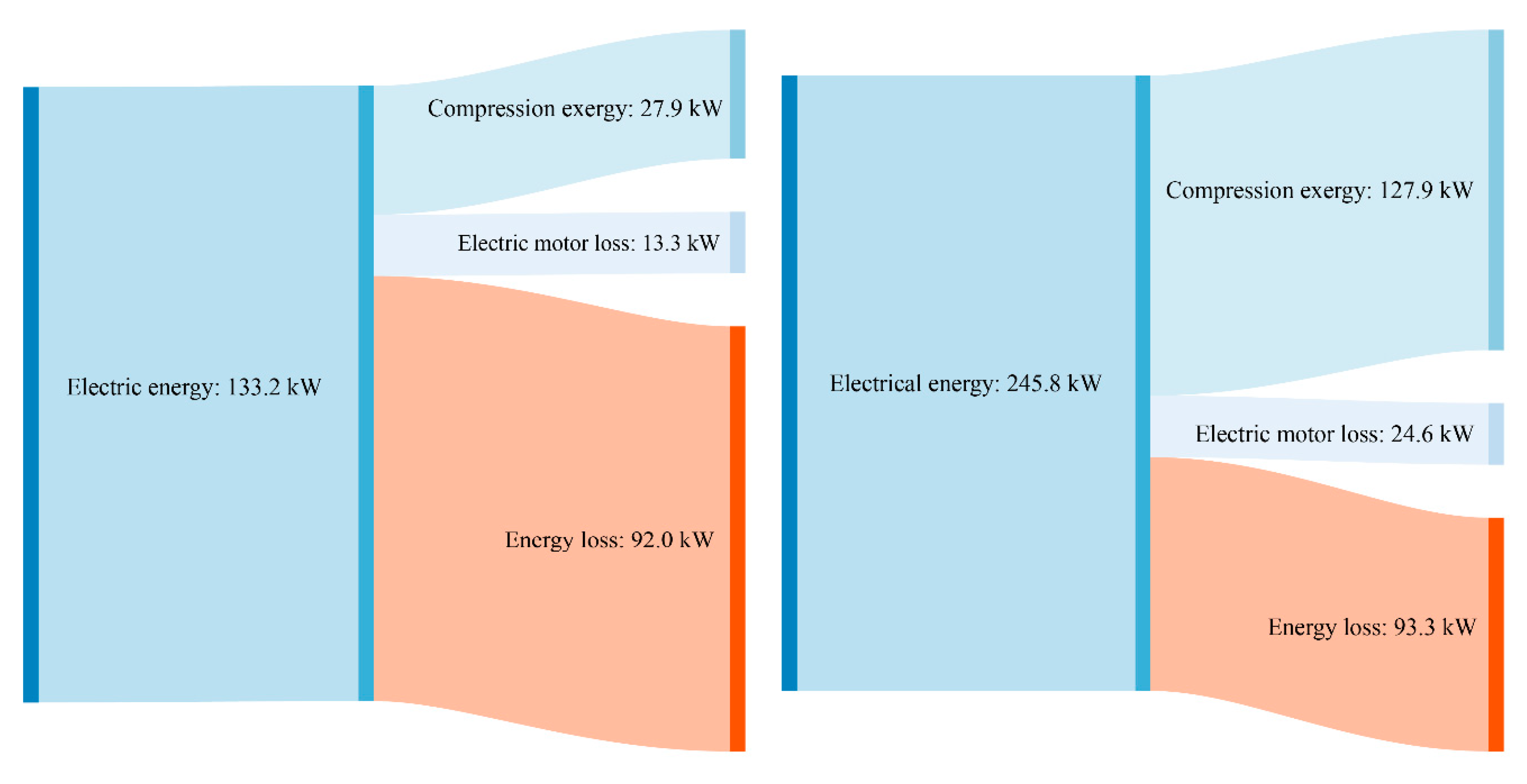 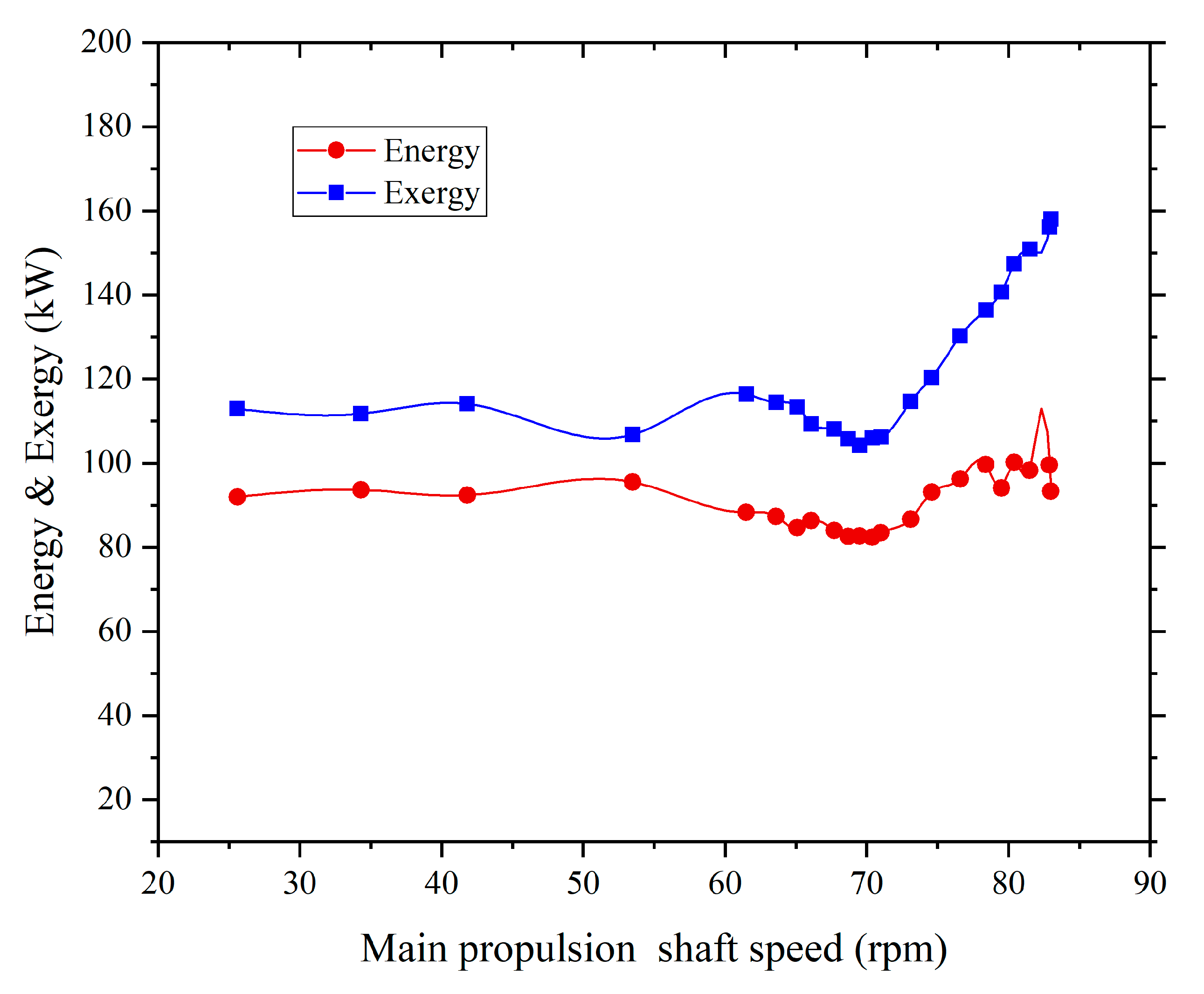 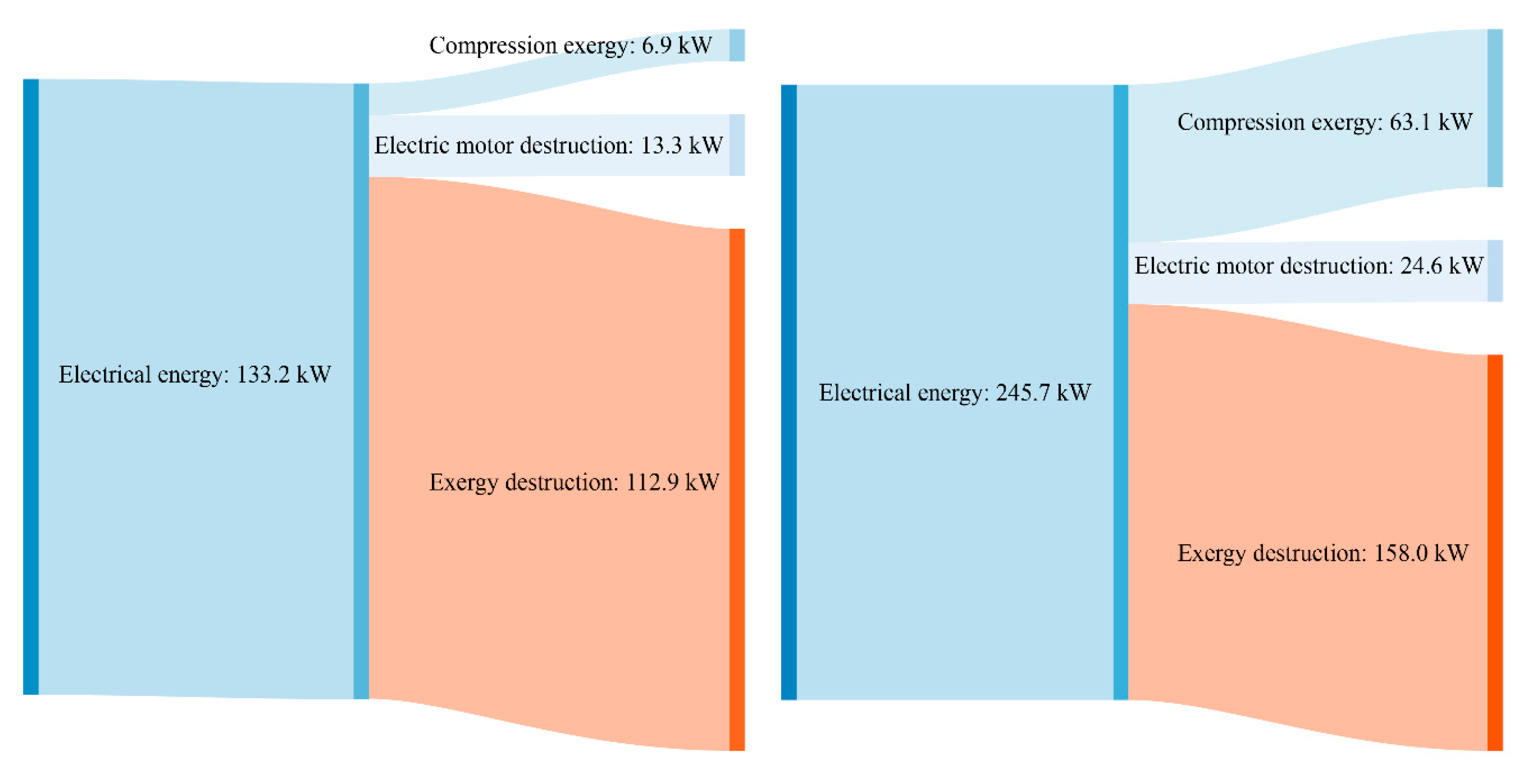 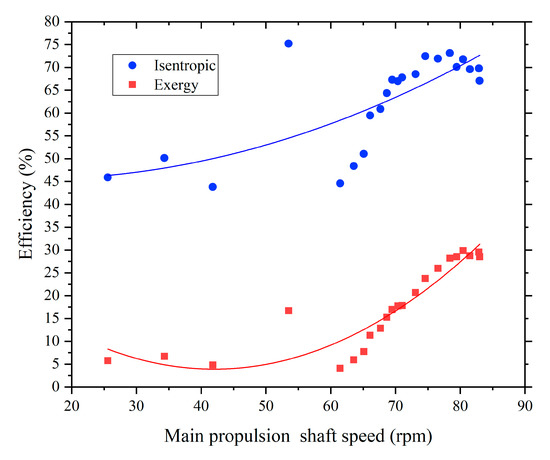 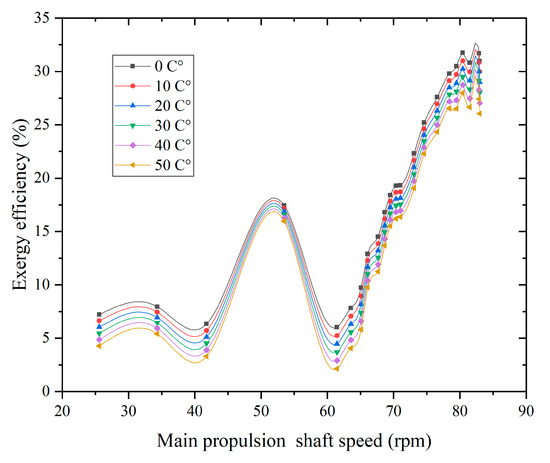 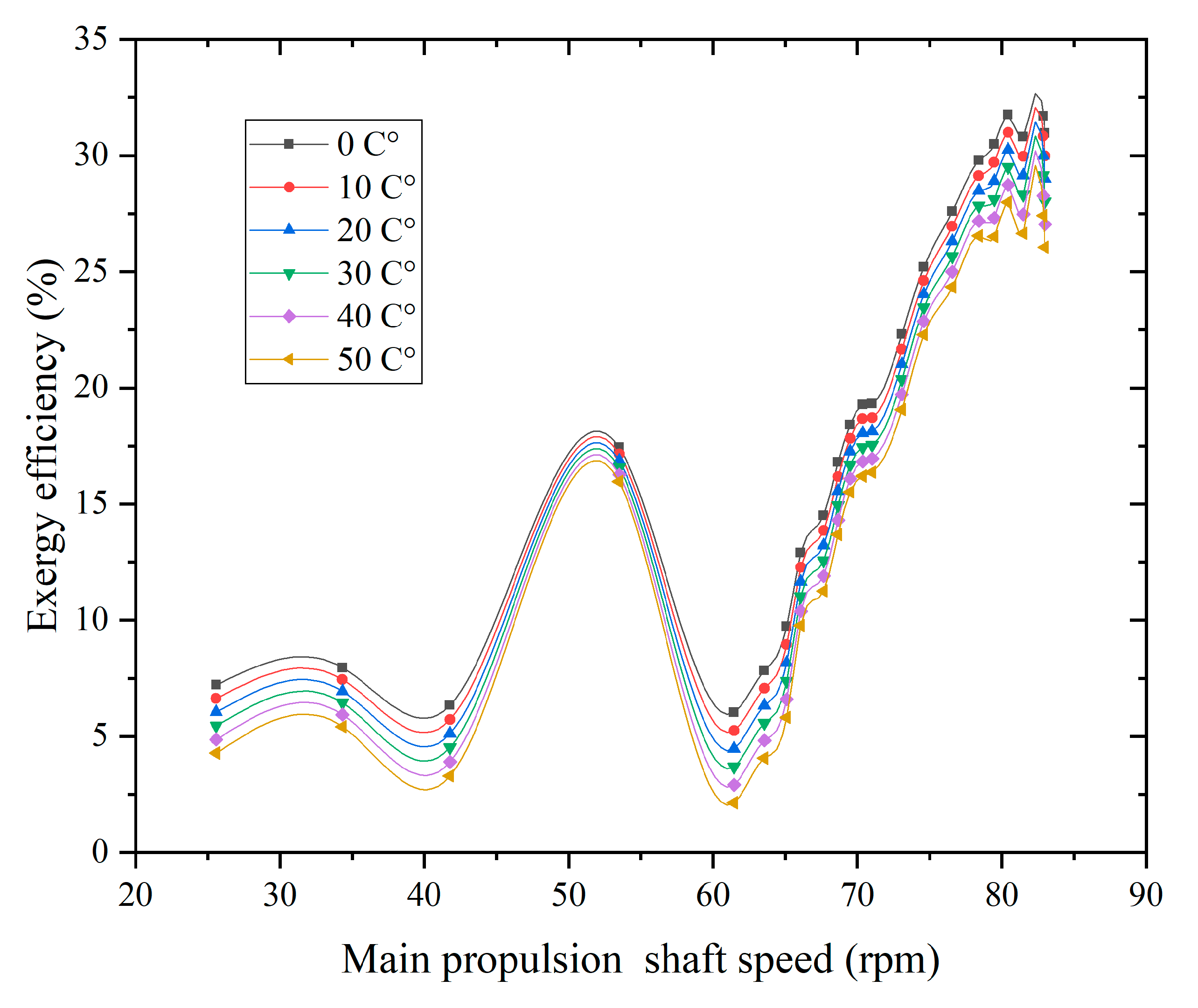 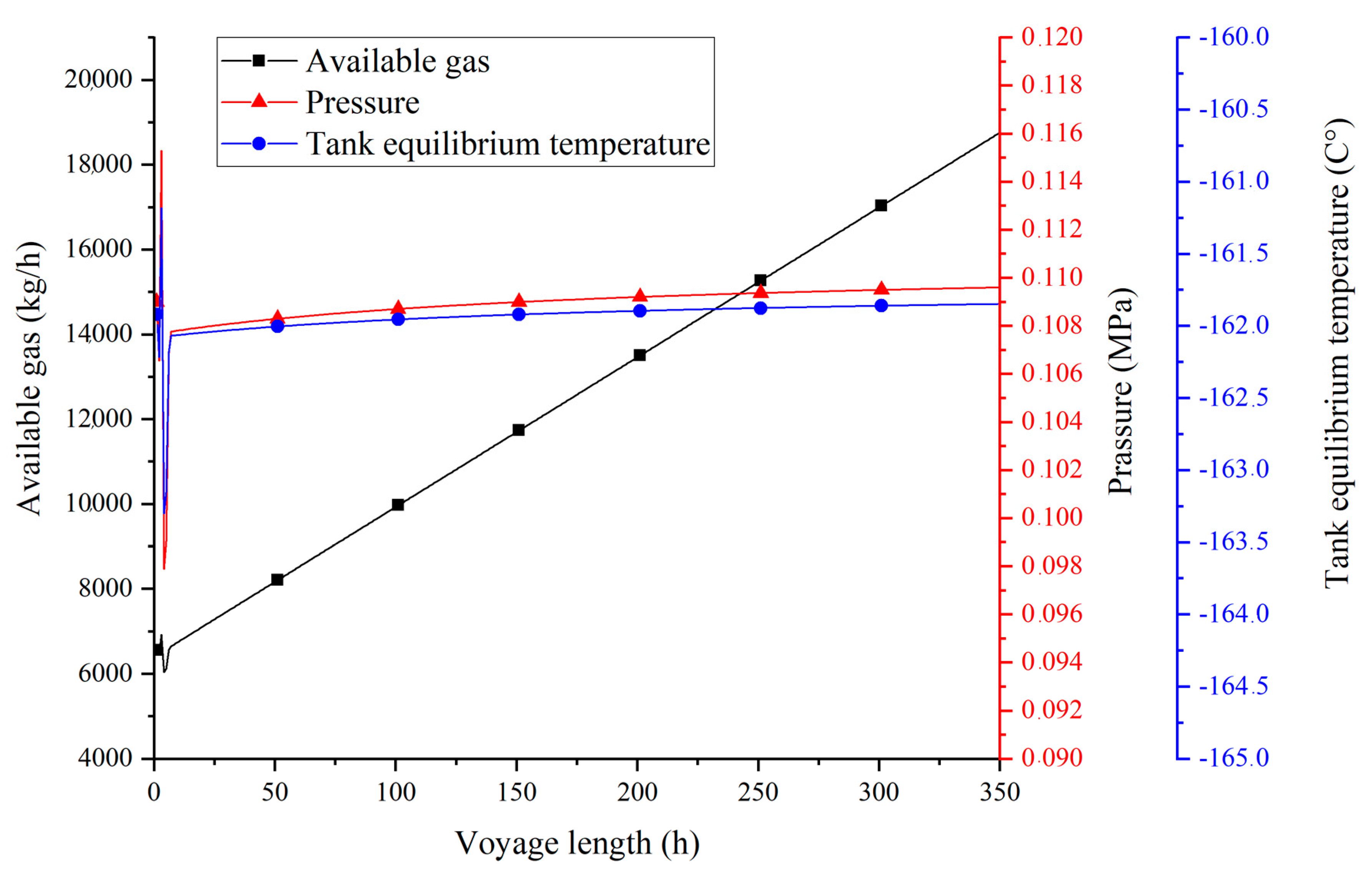