This paper reports on a psychometric study conducted to explore the factor structure and refine the Critical Cultural Competence Scale (CCCS). Critical Cultural Competence (CCC) functions to promote the safety, equity, and well-being of patients, their families, and health care professionals. The development process of this measurement scale was systematic and iterative, and included generating a pool of potential items based on the theoretical definitions of CCC. In this study, conducted with a sample of 170 registered nurses from British Columbia, Canada, we used Principal Component Analysis (PCA) to explore the factor structure of the initial set of 84 items as a final step in developing the CCCS. The final version of the measure consists of 43 items, and the PCA results supported a four-factor solution consistent with the theoretical underpinnings of the scale. Future research is recommended to further assess the construct validity of this newly created scale.
Keywords: factor analysis; psychometric study; cultural competence; measurement factor analysis; psychometric study; cultural competence; measurement

After obtaining ethical approval from the Behavioural Research Ethics Board of the University of British Columbia, eligible nurses were invited to participate in the study. A random sample of 1000 nurses was computer generated through the College of Registered Nurses of British Columbia (CRNBC). The target sample consisted of registered nurses who (a) were registered with the CRNBC as practising nurses, (b) had agreed to be contacted for research purposes, (c) were currently working in a hospital in British Columbia, and (d) were working either full-time or part-time. The researcher provided CRNBC with stamped recruitment and data collection packages; CRNBC affixed address labels and mailed the packages to the potential participants. As an incentive for participation, participants who completed the instrument were eligible to enter a draw to win $200 cash by completing a coupon with their contact information. Participants were assured that this coupon would be separated from the envelope immediately upon receipt to maintain their anonymity.
Nurses in the target sample received a recruitment and data collection package containing an invitation letter, a cover sheet explaining the study’s purpose and procedure, a paper questionnaire containing the 84-item CCCS and a set of 9 demographic questions, and a self-addressed and stamped envelope for returning the completed instrument. Participants were asked to complete the questionnaire and return it to the researcher within three weeks of receiving the package. Completing and returning the questionnaire signified consent. The total time required to complete the questionnaire was estimated to be 30 to 45 min. One hundred and seventy nurses completed the questionnaire.

The data were analyzed using the Statistics Package for the Social Sciences (SPSS) for Windows Version 21. Out of 1000, the 170 completed questionnaires were scanned and entered directly into the SPSS database. The recorded data were screened for accuracy by using two common methods. First, approximately 10% of the returned questionnaires were randomly selected and checked for correct entry. Second, frequencies were computed for each variable and checked for invalid codes (codes that fell outside of the specified range of values for the response scale) [26]. Negatively worded items were then reverse scored so that higher scores on CCCS items represented higher levels of critical cultural competence. Seventy of the 84 items showed use of the full range of responses across the study sample. Missing data was found to be minimal (i.e., less than 10% per item). A series of PCAs were conducted to assess the factor structure of the CCCS and refine the scale.

Table 1 presents the demographic characteristics of respondents. The majority of respondents were female (91.3%), had a bachelor degree in nursing (60.0%), and were in staff nurse positions (88.1%). Their ages ranged from 23 to 67 years (M = 43.6, SD = 11.7). The mean length of experience in the profession and in the organization was 16.6 years (SD = 12.1) and 11.1 years (SD = 9.4), respectively. Respondents worked in a variety of specialty areas, where the greater proportion of them worked in medical units (28.1%), followed by the emergency departments (18.8%) and outpatient clinics (18.1%). Almost half of the respondents (40.5%) reported having received some cultural training.
Ethnicity is an important variable in this study because of its focus on cultural difference and competence. The majority of respondents identified themselves as Caucasian (74.2%) with the two next largest groups being South Asian (12.6%) and Chinese (5.7%). Other ethnic identities included Far East Asian (1.9%), other Asian (1.3%), and First Nation (0.6%). Respondents identified 24 nations as their country of birth, including Canada, the Philippines, Taiwan, Hong Kong, South Korea, Slovakia, China, Ireland, Germany, Netherlands, Paraguay, Hungary, the United Kingdom, India, Russia, the United States, Zimbabwe, South Africa, Ukraine, Australia, Japan, Iran, and Jamaica. These countries were grouped into three major categories: Anglo-Saxon countries, European countries, and Asian countries so that the sub-sample size would be sufficient to support correlation analysis.

The internal consistency of the four factors was assessed using Cronbach’s alphas, and results are presented in Table 4. The Cronbach’s alpha statistics for the four subscales ranged from 0.60 (Critical Awareness) to 0.92 (Critical Empowerment). A value of 0.60 is considered the minimum acceptable score by many authors; scores in the 0.70s are considered acceptable, particularly for new instruments; and scores greater than 0.90 are considered excellent [40]. Inspection of the corrected item-total correlation showed that deletion of three items (#73, 74, 75) would increase the alpha for Critical Awareness to 0.64. However, we chose to retain these items because deletion would yield an increase of only 0.04, and because of their theoretical relevance.

This paper reports on the first field test of the CCCS as part of the instrument development process. The content of the CCCS was conceptually grounded in the experiences of a multicultural nursing workforce in Saudi Arabia, and refined through follow-up theoretical work. The instrument development process was overseen by an expert advisory group and the instrument was informally piloted through focus groups with Canadian nurses prior to this first field test. The objectives of this study were to investigate the factor structure and refine the Critical Cultural Competence Scale (CCCS). The use of EFA also helped to reduce the length of the CCCS from an initial set of 84 items to 43.
In the early process of developing the CCCS, we hypothesized that the empirical factor structure would reflect the theoretical components of the CCC model, and that the resulting factors would be moderately correlated. The results of the PCA supported most of our hypotheses. Findings indicated that a four-factor solution best describes the underlying components of CCC, congruent with the theoretical explanations underpinning the CCC model. Congruency between the observed factor structure and the underlying theory is a beginning step to providing evidence of construct validity, and is sometimes referred to as factorial validity [27,36,41]. Based on their theoretical meanings, these factors were labelled as Critical Awareness, Critical Knowledge, Critical Skills, and Critical Empowerment. Although we had hypothesized each of these factors as multifaceted, some of the facets (or sub-components) did not factor out as distinct factors, or they disappeared completely. However, an inspection of the component correlation matrix supported our assumption about the independence of the observed factors. Internal consistency was found to be adequate for each of the subscales.
The number of items within the CCCS was reduced from 84 to 43, with seven to 17 items in each component. This difference in number of items retained in each component may be related to the depth of the theoretical explanations of these components. Our final scale with 43 items is longer than many of the other published cultural competence scales which contain 20 to 31 items (e.g., see [12,15,42,43,44]). This difference could be related to the richness of theoretical meanings underpinning the CCC model.
Another strength of the CCCS is that it uses a seven-point Likert-type scale in comparison to the four- to six-point response scale used in many of the other cultural competence scales (e.g., [1,12,15,43,44]). Use of a seven-point scale has been recommended by many scholars for more accurately determining the participants’ level of agreement [45,46,47].
A strength of our PCA process was the way in which we determined the optimal number of underlying components. Identifying the factor structure in this study was not a straightforward process, perhaps due to the large set of items. In the course of analysis, we obtained contradictory results from the three techniques used to determine the number of factors: Kaiser’s criterion, a Scree test, and parallel analysis. Therefore, we explored solutions with a different numbers of factors, starting from the highest (nine) to the lowest (four), until a satisfactory and interpretable factor structure was obtained. This strategy is recommended in the literature, as it is generally preferable to overestimate rather than underestimate the number of factors [35].
A potential limitation of the study is the representativeness of the respondents and generalizability of findings. The sample was representative of British Columbia nurses with respect to gender, highest education level, and mean age and experience in the nursing profession [48]. However, the response rate was low, which raises questions about potential bias if the nurses who participated in the study are different than those who did not participate. Therefore, further testing of the scale in varied contexts is recommended.
Cultural awareness, knowledge, skills, and empoawerment are integral to the provision of equitable and safe health care in today’s multicultural environment [9,49,50]. Therefore, our intent in developing the CCCS is to provide a measure of critical cultural competency that can be used by researchers and policy makers to evaluate the cultural competence of healthcare providers and the effectiveness of educational and policy initiatives that aim to promote cultural competence. The outcome of this study was a four-factor, 43-item scale that can measure healthcare providers’ perceptions of their critical cultural competence. Further research is necessary to evaluate the discriminant and convergent validity of the CCCS, and to assess its reliability in a variety of contexts.

Both authors contributed intellectually and significantly to the paper. 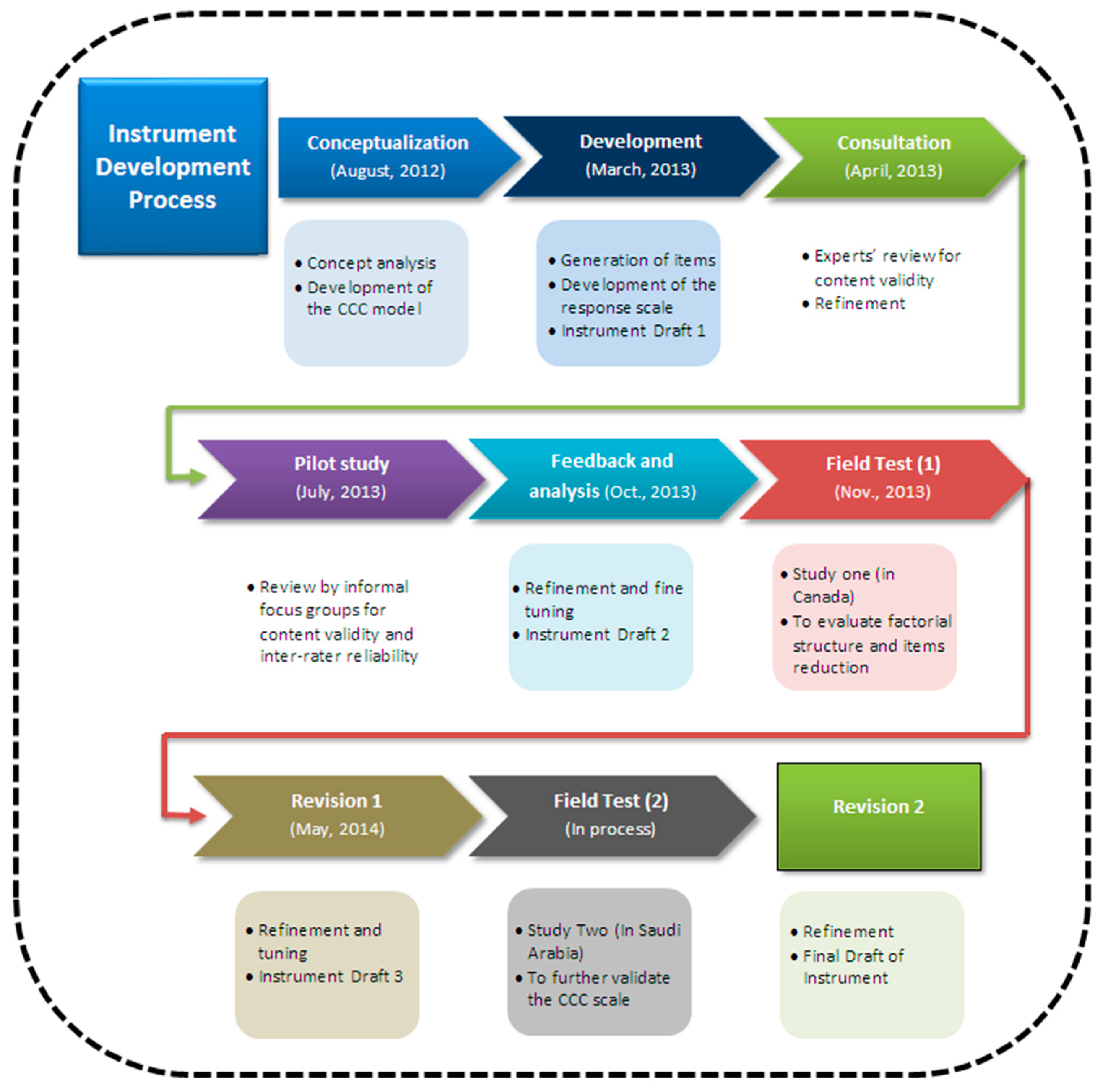