Acknowledgment to Reviewers of Environments in 2020

:
Water is a quintessential element for the survival of mankind. Its variety of uses means that it is always in a constant state of demand. The supply of water most primarily comes from large reservoirs of water such as lakes, streams, and the ocean itself. As such, it is good practice to monitor its quality to ensure it is fit for human consumption. Current water quality monitoring is often carried out in traditional labs but is time consuming and prone to inaccuracies. Therefore, this paper aims to investigate the feasibility of implementing an Arduino-based sensor system for water quality monitoring. A simple prototype consisting of a microcontroller and multiple attached sensors was employed to conduct weekly onsite tests at multiple daily intervals. It was found that the system works reliably but is reliant on human assistance and prone to data inaccuracies. The system however, provides a solid foundation for future expansion works of the same category to elevate the system to being Internet of Things (IoT) friendly.
Keywords:
arduino UNO R3 board; RELAND SUN pH sensor; DS18B20 temperature sensor; ReYeBu turbidity sensor; OOTRTY brand total dissolved solids sensor

The development of a simple prototype system fit for water quality monitoring needs to be comprised of the following components:
The main component of the monitoring system is the Arduino UNO R3 Board shown in Figure 2. It is a microcontroller board based on the ATmega328 with three important features:
The system used is an Arduino microcontroller with four accommodating sensors: pH, Temperature, Turbidity, and Total Dissolved Solids (TDS). Sensors were chosen based on ease of use, measurability (of parameters), portability, as well as being economical and cost-effective as a strict budget must be adhered to. The sensors are collectively shown in Figure 3.
Figure 3a shows the RELAND SUN pH sensor with a temperature range of −10 °C to 50 °C. It has a response time of under 5 s but a settling time of nearly a minute for readings to stabilize. Figure 3b shows the DS18B20 temperature sensor that has an operating temperature range from −55 °C to +125 °C with accuracy +/−0.5 °C (between the range −10 °C to 85 °C). The ReYeBu turbidity sensor shown in Figure 3c, was used to measure turbidity and has an operating temperature of 5 °C~90 °C with a response time of less than 500 ms. The OOTRTY total dissolved solids (TDS) sensor referred to in Figure 3d was used to measure TDS. It has a measurement range of 0~1000 ppm and measurement accuracy of ±10% F.S. It should be noted that the sensor cannot be used above 55 °C and it is advisable not to place the sensor too close to the edge of a water surface.
Figure 4 below shows the connection of the sensors to the Arduino microcontroller and operating laptop.
Due to the limited number of power outputs of the Arduino, the power pin of the Arduino was connected to a breadboard to allow powering of multiple devices at the same time, as shown in Figure 5 below.
Both turbidity and pH sensors require calibration to convert the obtained voltage readings to the corresponding turbidity and pH readings. To calibrate, different concentrations of soil and water mixtures and different pH solutions were used to calibrate the turbidity and pH sensors, respectively.
The turbidity sensor was calibrated by measuring several soil and water mixtures made from known masses of soil mixed with 0.6 L of water. The data are tabulated below in Table 2.
Figure 6 below shows the plotted relationship between the average voltage readings and average NTU readings.
The pH sensor was calibrated by testing it against three solutions of Atlas Scientific pH samples of pH 10, 7, and 4. Due to a room temperature of 20 °C, there is a slight pH change and actual pH is adjusted according to specification labels. Data from calibration is found below in Table 3.
Figure 7 below shows the plotted relationship between the average voltage readings and average pH readings.
Programming was done with an Integrated Development Environment (IDE) based in Java with the programming language C/C++. With the IDE, program sketches can be made, compiled, debugged, and uploaded to the Arduino microcontroller board to be executed. References to build the program sketches may be found online and OneWire and DallasTemperature libraries needed to be downloaded for the temperature sensor to function.
Testing was carried out at a small stream within the Universiti Brunei Darussalam (UBD) campus ground, shown in Figure 8. Underground pipe discharge is the source of the stream and is human controlled such that discharges are only active during the morning. Water from the stream thus flows downstream during the morning and the stream is otherwise still. The testing ground is also shaded by trees. Testing was done during working days over a period of 4 weeks for a total of 20 days. Data were taken once in the morning at 10:00 a.m. and once in the afternoon at 4:00 p.m. Readings were taken every 10 s over a 2-min time period to establish the average reading for a particular parameter.

Table 4 below shows the data gathered during the duration of the test. Data for pH were initially unavailable while the pH sensor was being calibrated. Readings for pH only became available from week 3 onwards after the sensor was readied.
The data from the four weeks were compiled and plotted on graphs to analyze any correlation between parameters and to evaluate the health of the river.

The results seem to indicate that the stream is healthy, however more tests are required to further determine data validity and operability of the current system before the system can be deployed elsewhere. The prototype yet lacks many capabilities and thus require upgrades and expansions; namely, to give it the ability to transmit data through a wireless network to a remote laptop or mobile at any given time and location, and a stronger memory drive or the ability to store data in databases. To that end, a Raspberry Pi 4 Model B could be used in conjunction with the current system. The Pi offers ground-breaking increases in processor speed, multimedia performance, memory, and connectivity. It is outfitted with dual-band wireless LAN and Bluetooth which can be routed to a dedicated monitor which is vital in wireless networking. Additionally, a SIM card would allow it to store quantities of data from the Arduino. The combined central system must then be encased to prevent potential detrimental drawbacks from exposure to environmental weather and conditions. Among the sensors, the turbidity sensor must be improved or replaced altogether. An opening at the top of the turbidity sensor allows water to enter if the sensor is lowered too deep into the stream and the influx causes a direct disturbance in readings. Its short cable meant that it is also severely limited to use at the water edges. A suitable replacement could be the digital type RELIHONES turbidity sensor that is waterproof and offers a longer cable. Implementation of additional sensors in the project extension will allow for monitoring of extra parameters, particularly of concentration of various ions. Such data may be helpful for better determining river health through calculation of Water Quality Index (WQI) or other related indexes. Finally, changes could be made to the testing environment and schedule. Conducting the test at additional locations and taking more frequent data readings should provide for much needed additional data and accuracies in determining river health and validating the monitoring system. 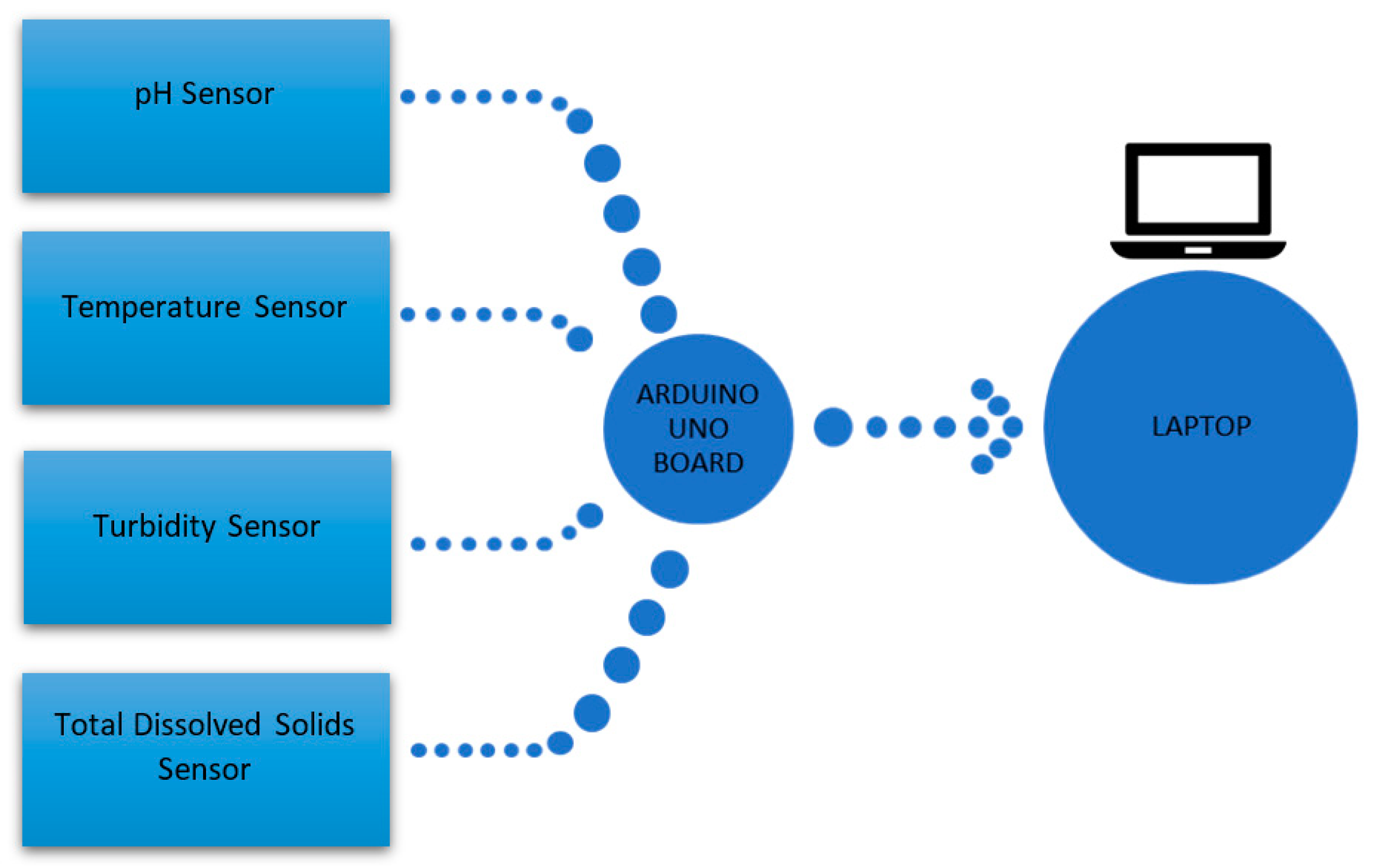 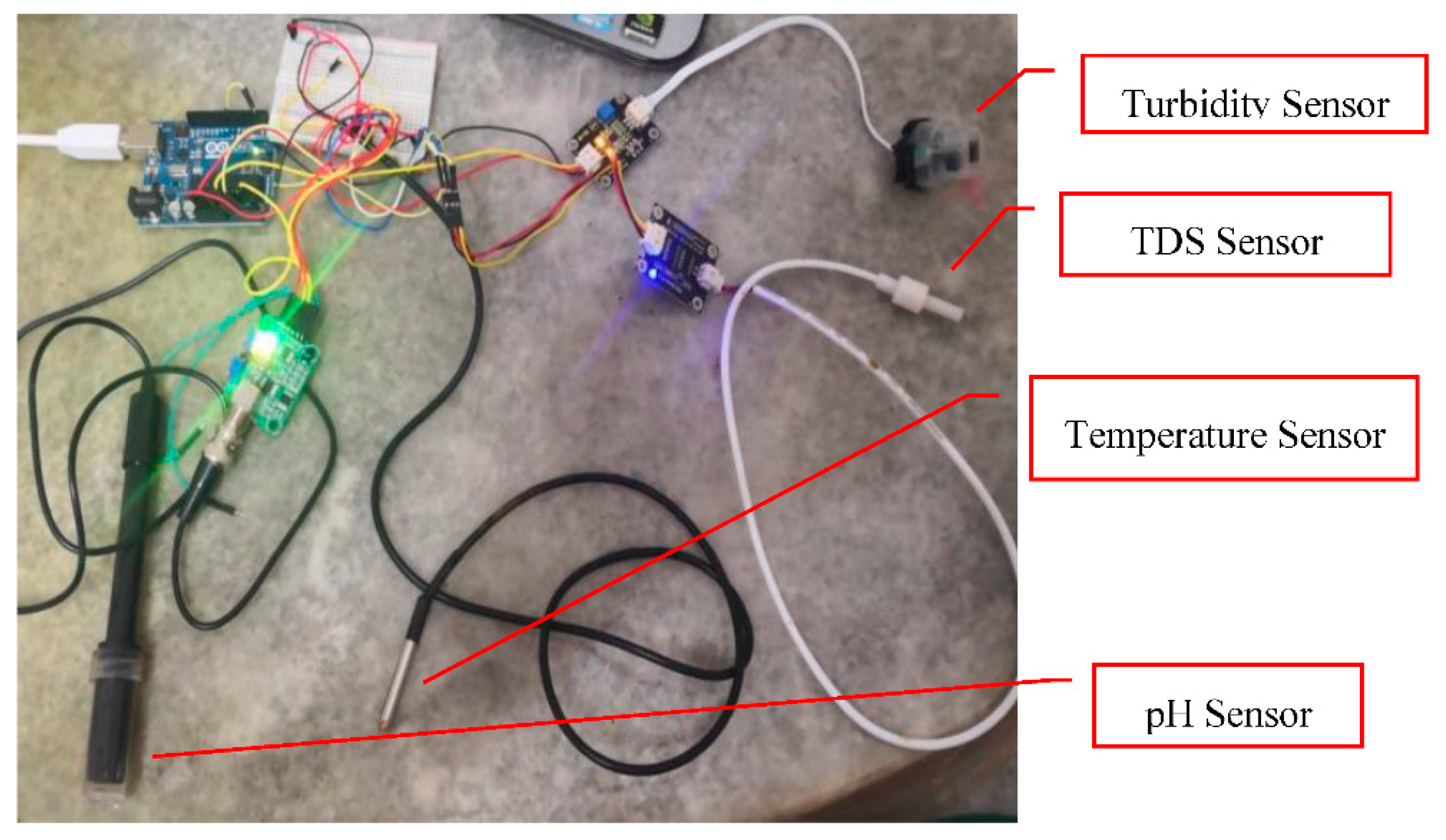 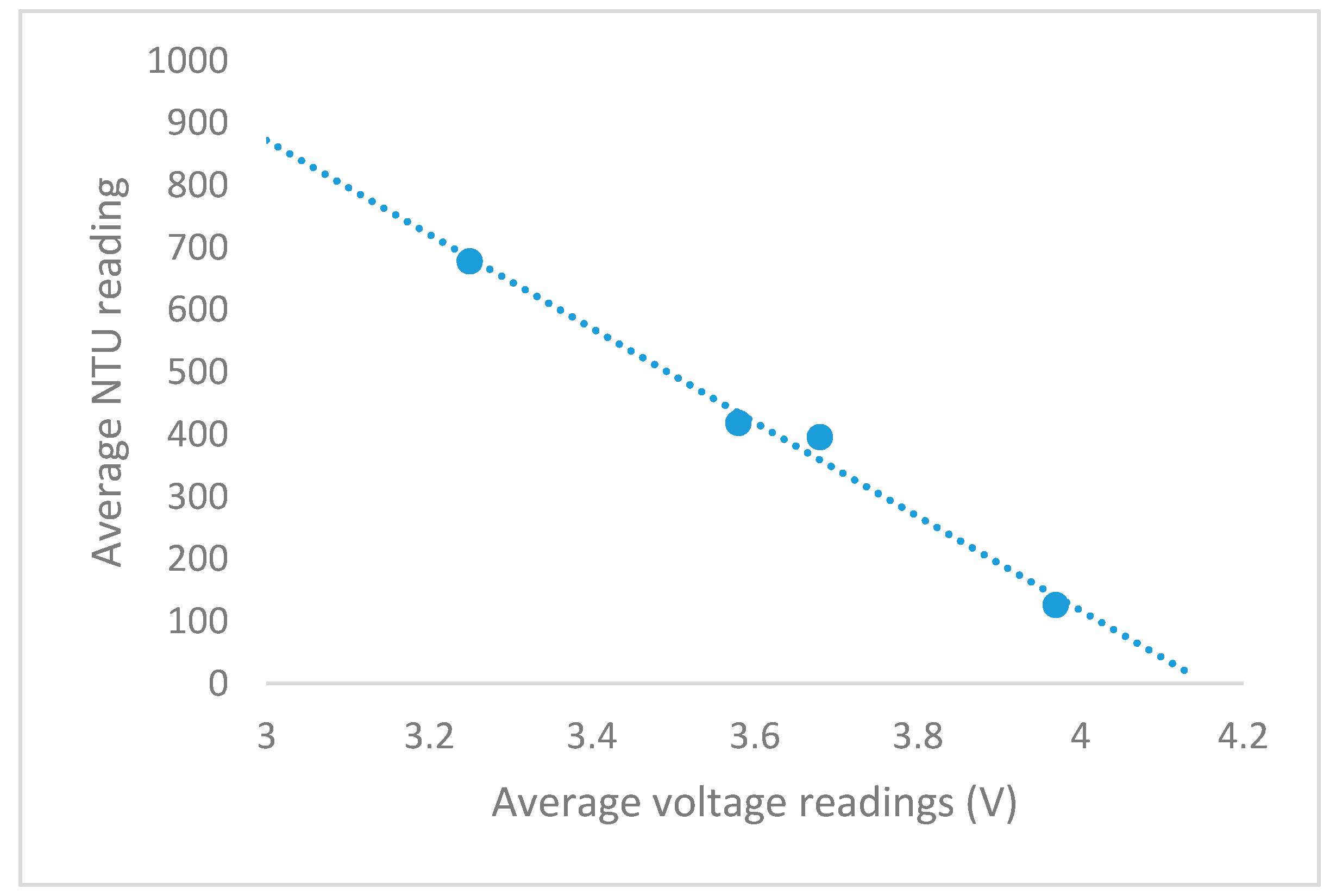 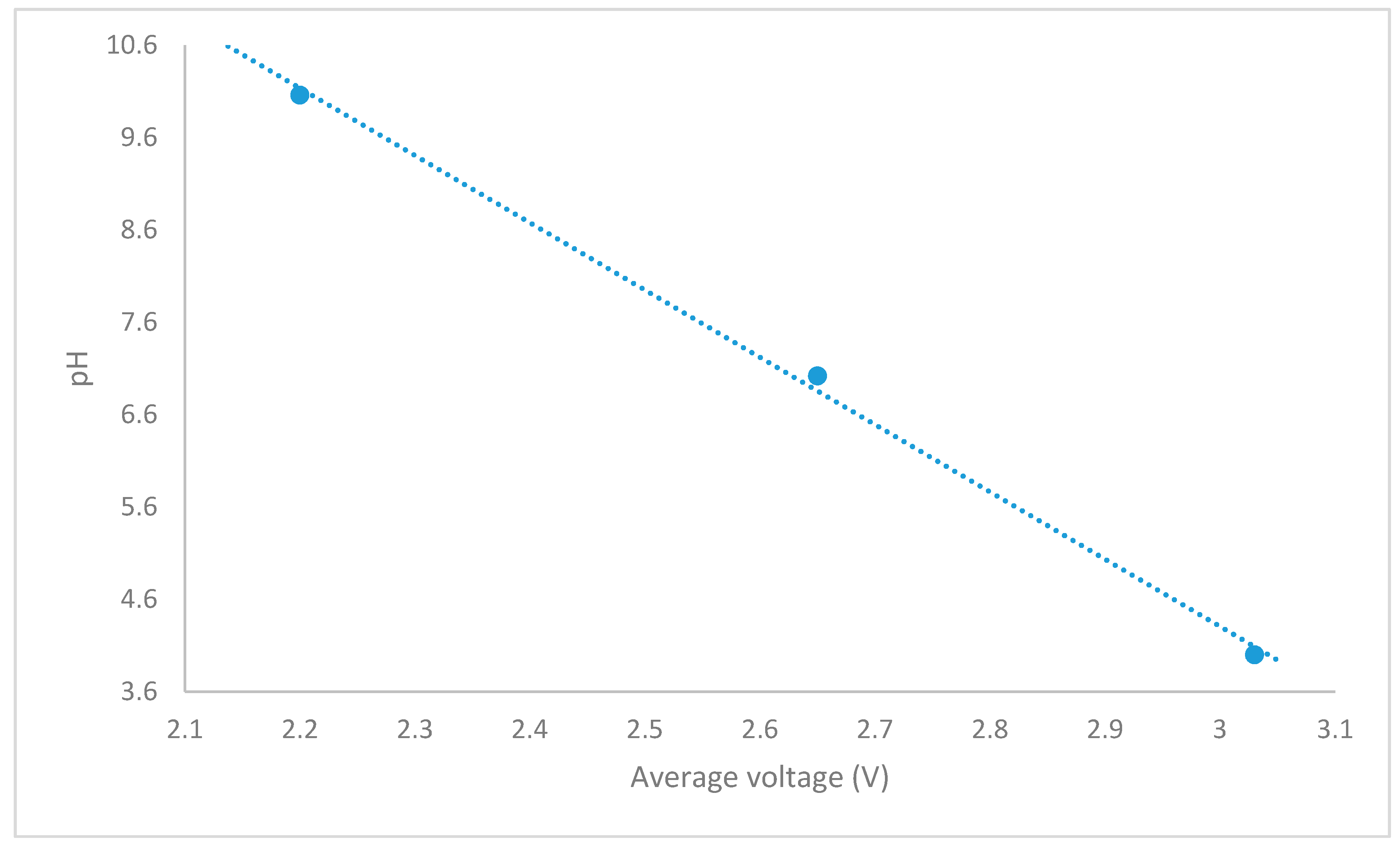 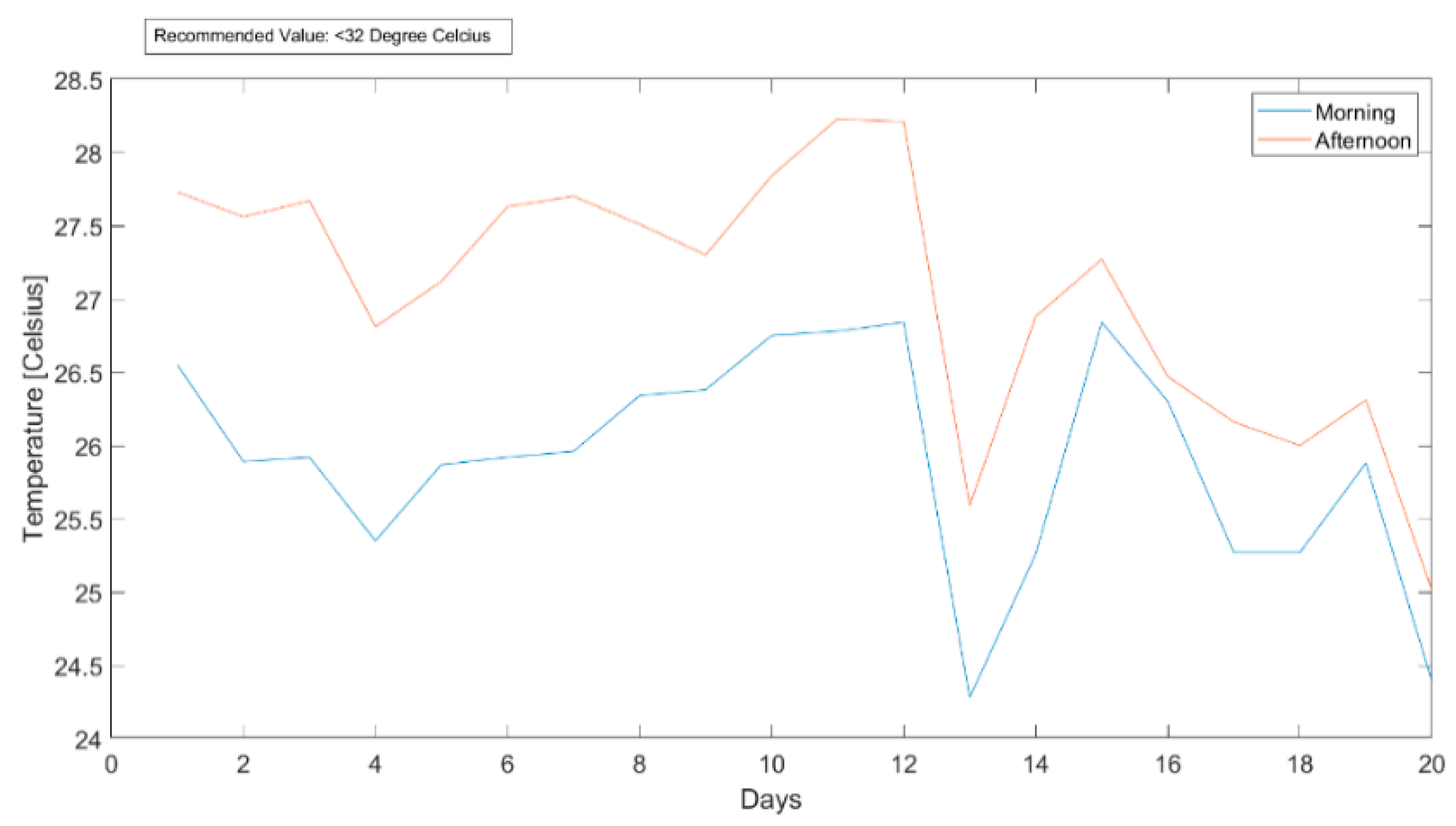 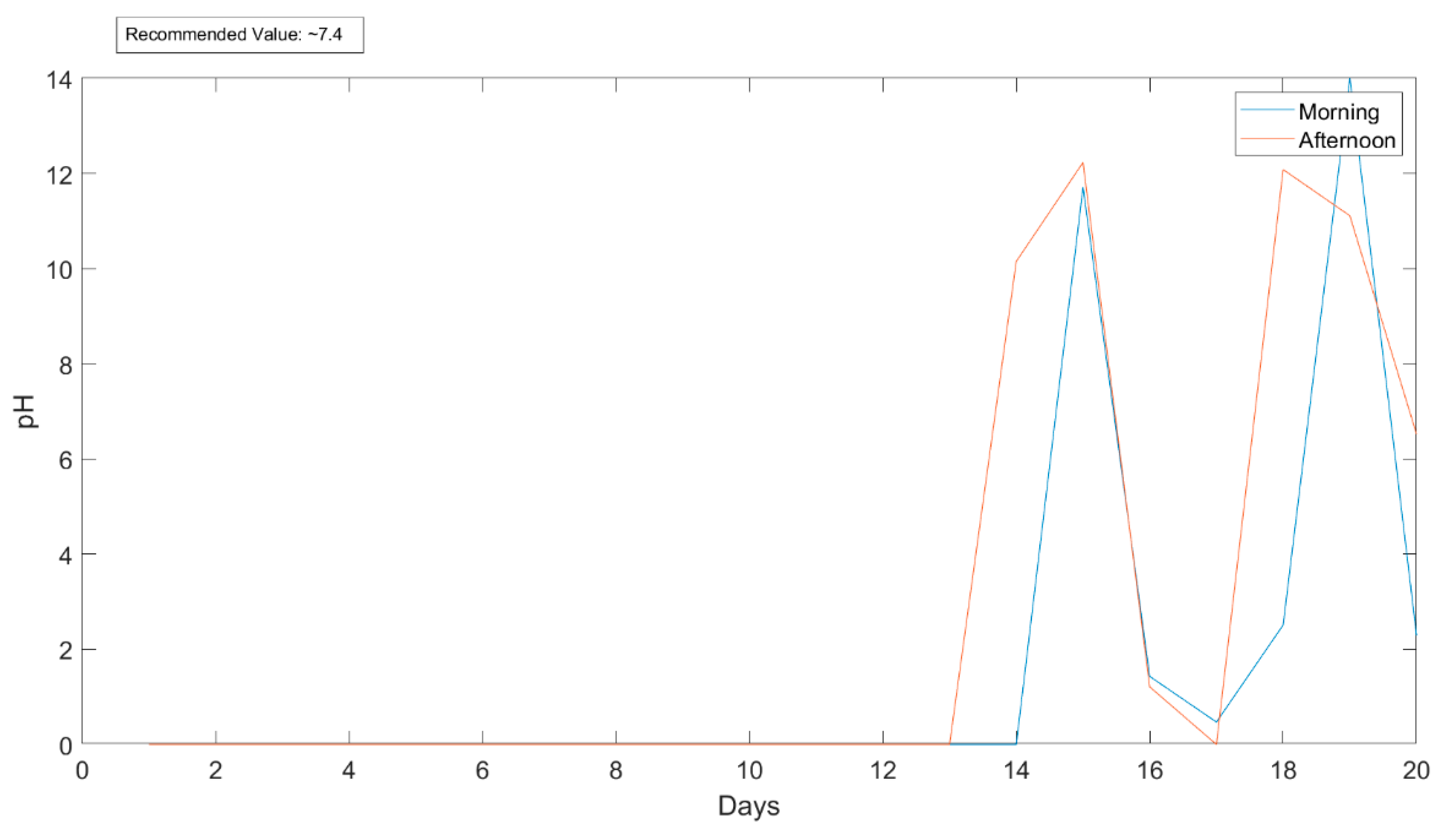