Challenges and Limitations of Karst Aquifer Vulnerability Mapping Based on the PaPRIKa Method—Application to a Large European Karst Aquifer (Fontaine de Vaucluse, France)
Next Article in Special Issue

The Czech Republic (CR) is located in Central Europe. The population is over 10 million. The CR is one of the most developed and industrialized economies in Central and Eastern Europe. With its long tradition, the automotive industry in the CR is an important sector of the national economy. Trademarks like Skoda (nowadays included in Volkswagen Group, AG, (Mlada Boleslav, Czech Republic), Tatra (nowadays called Tatra Truck, a.s., Koprivnice, Czech Republic), Karosa (nowadays Ivecobus included in CNH Industrial, Vysoke Myto, Czech Republic), and Avia (nowadays called Avia Motors, s.r.o., a part of Czechoslovak Holding, Prague, Czech Republic) are some examples. Moreover, international companies such as Hyundai, Toyota, and PSA Peugeot Citroën have their manufacturing subsidiaries there too.
Despite its small economy, the CR is a leader in vehicle production in the European Union (EU). According to the European Automobile Manufacturers Association (ACEA), Figure 1 shows the 10 biggest car producing countries in the EU. The CR remains the EU’s fifth largest producer of passenger cars, with 1,344,182 cars in 2016 and 1,413,881 cars in 2017.
The automotive industry in the CR has accelerated since 2006 when it reached the production of 821,323 cars (Figure 2). In 2008, it fell from 880,083 to 831,748 because of the worldwide economic crisis. This drop has been largely offset by an intense production in the following years.
The European Commission adopted initiatives to build a Single European Transport Area towards a competitive and resource efficient transport system. The White Paper includes proposals to reduce Europe’s dependence on imported oil and to cut carbon emissions in transport by 60% by 2050 [3]. These initiatives have also been adopted by the Czech Government. In November 2015, it approved the National Action Plan for Clean Mobility (NAP CM) to support e-mobility in the CR [4].
Europe is slowly coming to terms with the need to switch to electric mobility. Electric vehicles are perceived as the key technology in the automotive industry contributing to sustainable development with lower greenhouse gas emissions, less air pollution, and new job opportunities with positive social impact [5,6]. Nowadays, the European Commission is considering the introduction of minimum quotas for the production and sales of zero-emission vehicles that Europe’s car makers will have to comply with. China, as the biggest car producer, confirmed a vehicle quota requiring that 10% of carmakers’ annual vehicle production be fully electric or plug-in hybrid vehicles in 2019, with an increase to 12% in 2020 [7]. At the moment, according to data by the ACEA, over 5% of all passenger cars on European roads run on alternative fuels. Petrol cars remain the most sold cars in the EU, where they represented 49.4% of market share in 2017. In the CR, electrically-chargeable vehicles amounted to 0.1% of sold cars in 2017. In comparison with other EU countries, this is the lowest market share (Table 1). The leader is Sweden with 5.2%, followed by the Netherlands (2.7%), Belgium (2.6%), and Finland (2.6%).
According to the ACEA, 76% of all electric vehicle (EV) charging points in the EU are located in just four countries. Out of 100,000 charging points across the EU today, almost 30% are located in the Netherlands (32,875), 22% in Germany (25,241), 14% in France (16,311), and 12% in the United Kingdom (14,256). A total of 684 charging points are available in the CR. Considering the country size and the fact that it has the lowest market share of electric vehicles, the number of charging points is not that small. Hungary, a much larger country, has 272 charging points, and the almost five-times larger Poland has 552 charging points at the moment, according to the data of [8].
Given the abovementioned information, the EV sector is developing worldwide. The development is accompanied by extensive research and environmental analyses of electric vehicles [9,10,11,12,13]. For example, [14] presented a comparative environmental assessment of alternative fueled vehicles. Using the Life Cycle Assessment (LCA) approach, the paper compared environmental aspects of electric vehicles with compressed natural gas (CNG) vehicles, liquid petrol gas (LPG), biogas (BG), plug-in hybrid electric vehicles (PHEV), and hybrid electric vehicles (HEV), along with conventional diesel and petrol vehicles. There are studies aimed at the environmental assessment of batteries for electric vehicles. [15] assessed the impact of Lithium Metal Polymer and Lithium-ion stationary batteries. Refs. [16,17] assessed Lithium-ion batteries as for their resistance and aging. [18] focused on costs ownership analysis of electric vehicles in comparison with internal combustion engine vehicles. There are also comparative studies assessing electric vehicles in two different countries. [19], for example, compared the research on new technologies in electromobility in China and Germany. However, these studies did not include environmental analyses of the carbon and water footprints of EVs regarding electric power generated by various sources. This paper aims to do so for the CR and the Czech national energy system, which will be supplying EV batteries for the country by 2050.
In the paper, we assess the carbon and water footprint of electric vehicles and provide a comparative analysis of energy use from the grid to charge electric vehicle batteries in the Czech Republic. The analysis is done for the period of 2015–2050 based on the Eurostat database, which provides a summary of expected trends in electricity generation by source [20]. The outlook is summarized in Table 2. In the future, an increase in the generation of nuclear energy and energy from alternative sources, such as solar, water, and biomass-waste, is expected. A decrease is expected in electricity generated from solids. From 2020 onwards, electricity generation from oil is not expected.
As electric vehicles are becoming an important element in the development strategy of the automotive industry in the CR, this analysis contributes to the assessment of various approaches to e-mobility development in the CR and assesses the environmental impact of e-mobility. The results of this study may be useful as the first step towards a holistic approach to carbon and water footprints of electric vehicles and, thus, can include all stages of a vehicle life cycle. This paper can help practitioners and decision makers in the automotive industry to understand water source impacts and develop a water management strategy to decrease their water footprint.

The aim of this paper was to assess the carbon and water footprints of electric vehicles’ life cycles (passenger car production, battery production, road construction, car use, maintenance, and disposal of all components.) and battery charging in the CR, taking into account the trends in power supply to charge EV batteries from 2015 to 2050.
Carbon footprint indicators were obtained based on the LCA using the Intergovernmental Panel on Climate Change (IPCC) 2013 method [20]. IPCC 2013 is the successor of the IPCC 2007 method, which was developed by the Intergovernmental Panel on Climate Change. It contains the climate change factors of IPCC with a timeframe of 100 years. The total amount of carbon footprint has direct and indirect impacts on human activities expressed by a reference unit of kg of CO2. The carbon footprint is calculated based on the global warming potential [23].
Water footprint indicators were obtained based on the LCA using the method developed by Hoekstra et al. [24]. The water footprint was calculated with SimaPro v. 8.5 (Pré Sustainability, Amersfoort, The Netherlands), which allows for the identification of regions with high water stress. SimaPro v. 8.5 has a wide range of water footprint impact assessment methods, both on midpoint and endpoint levels. This analysis was done along with the method used by Hoekstra et al. [25]. A water footprint is a measure of how much water product uses and which direct and indirect environmental impacts result from this. It can help the understanding and management of water use.
The study of water consumption of electric vehicle battery charging was conducted to explore the process’ environmental aspects and determine its water footprint. Water resource management is an important determinant of electromobility development, but, so far, the reported research on environmental impact assessment has been scarce. Water footprint (WF) methodology is a new concept introduced by Hoekstra [25,26,27] to quantify and map indirect water use and show the relevance of involving consumers and producers along the supply chains in water resource management. In the paper, the amount of water used for electric vehicle battery charging included direct and indirect water usage. Direct water use is physically used water during the process, while indirect use is water needed to create something used in the process. This indicator is applied to the consumed water volume and only assesses used water. The regional factors are weighed averages of the freshwater withdrawal by country, based on data from the Pacific Institute [28]. Data from the Pacific Institute provides information about resources to help protect and preserve fresh water around the Earth.
The LCA was conducted in accordance with ISO 14040:2006 [29] and ISO 14044:2006 [30]. The goal and scope of the study, functional unit, system boundary, and basic assumptions were defined. The LCA for carbon and water footprints was made using the SimaPro v. 8.5 package with the Ecoinvent v. 3 database [28]. The basic assumptions used for the vehicle life cycle come from the databases of [28] and Del Duce et al. [31]. The EVs data source used for the analysis was the Ecoinvent v. 3 database [28] (Table 3).
Input and output data were converted to a functional unit (FU). The FU of this study was 100 km. The system boundary includes a range of processes from cradle to grave: Passenger car production, battery production, electricity supply for EVs (the boundary of the EVs system covered the electricity mix in the CR from 2015 to 2050), road construction, car use, maintenance, and disposal of all components. The road maintenance assumes 100 years of road life. In the use phase of EVs, electricity consumption was tracked throughout its power supply chain. A vehicle equipped with a lithium-ion battery was chosen for the analysis because it is the most frequently used battery for EVs. The inventory data included battery production with a dataset for the lithium-ion type battery used for the main drive of the EVs. An EV energy consumption, including charge and discharge battery efficiency, of 19.9 kWh/100 km was assumed [28,32]. The electricity mix used for the battery charging is one of the most important parameters for the data, and it is crucial to understand which type of electricity mix will be used to charge the EVs battery. It was assumed that the primary variable determining the environmental impacts of EVs in the CR would be the energy infrastructure used to charge the batteries of electric vehicles. For this reason, evaluation was conducted on the projected changes in the energy sources of the CR. The analyses were carried out on the energy used for battery charging from the current electricity grid and on the forecast electricity grid for the years 2015–2050. Data of electricity generation for the years 2000–2050 used to charge electric vehicle batteries were obtained on the basis of national data (the Czech Republic’s National Inventory Report, 2017 [21,22]) (Table 2).

The paper was conducted within the framework of the project LO1404 Sustainable development of ENET Centre and SP2019/160 supported by the project “Electromobility in Czech-Polish Cross-border Area”, reg. no. CZ.11.4.120/0.0/0.0/16_013/0001585 which is co-financed by the EU fund for regional development, programme Interreg V-A Czech Republic-Poland, Fund of microprojects 2014–2020. 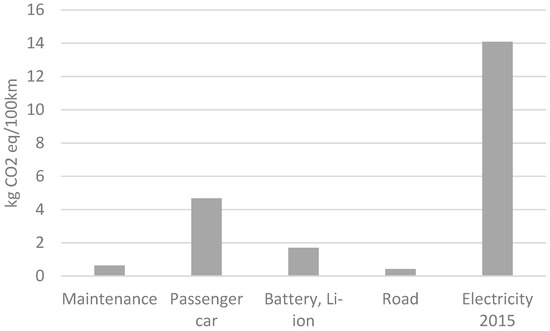 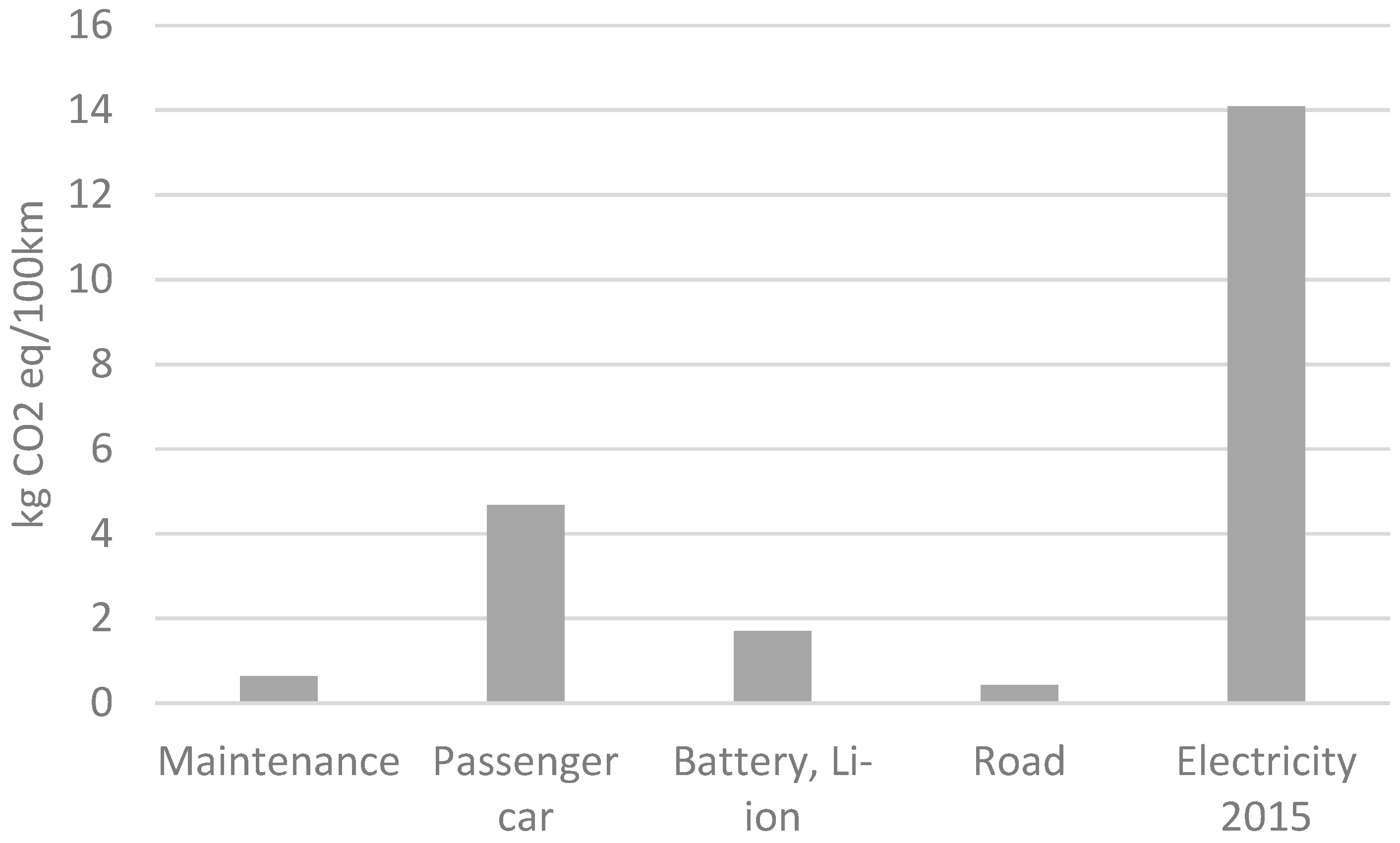 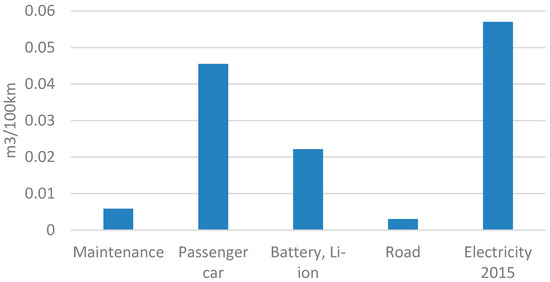 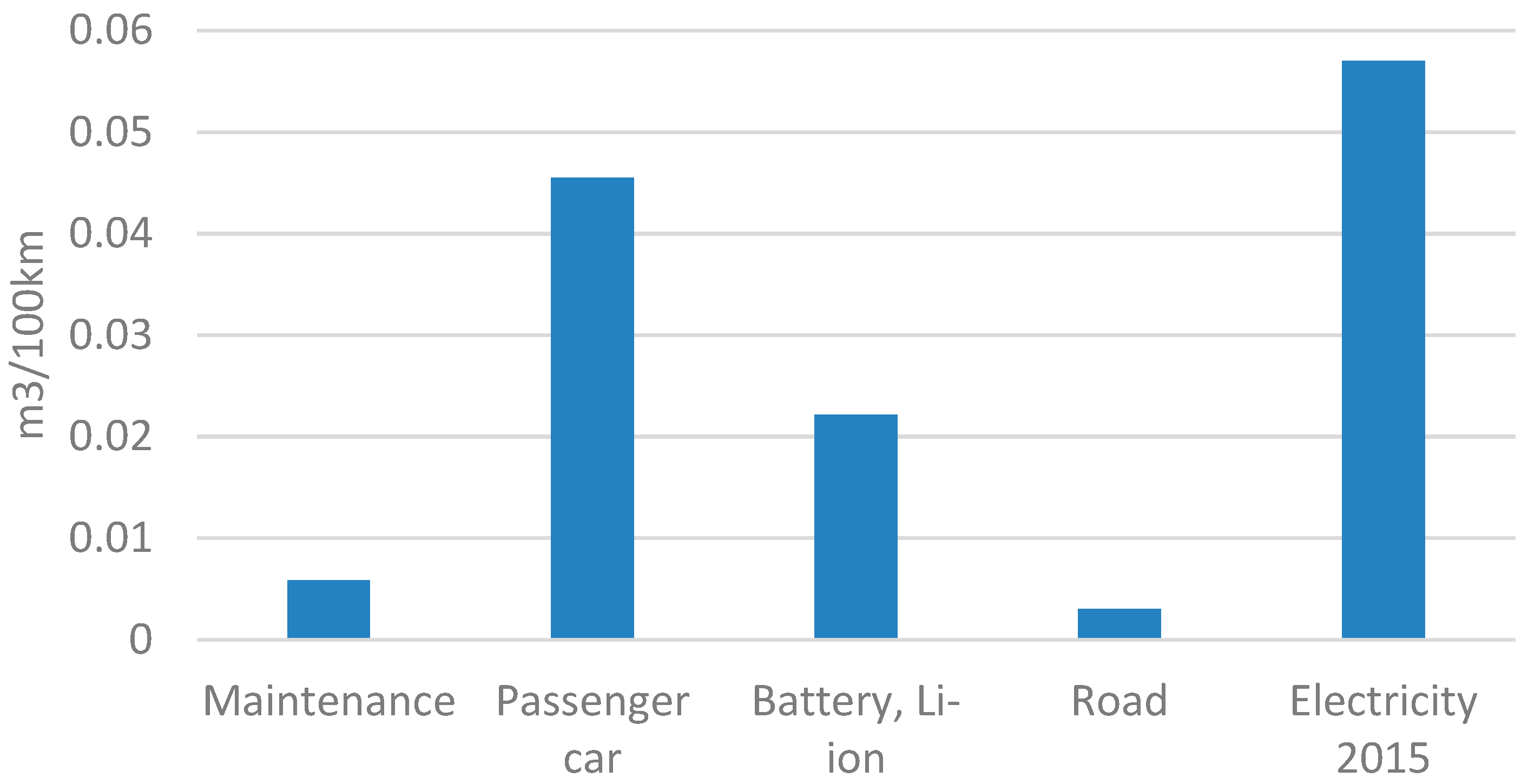 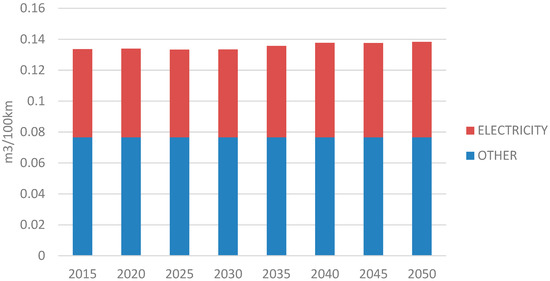 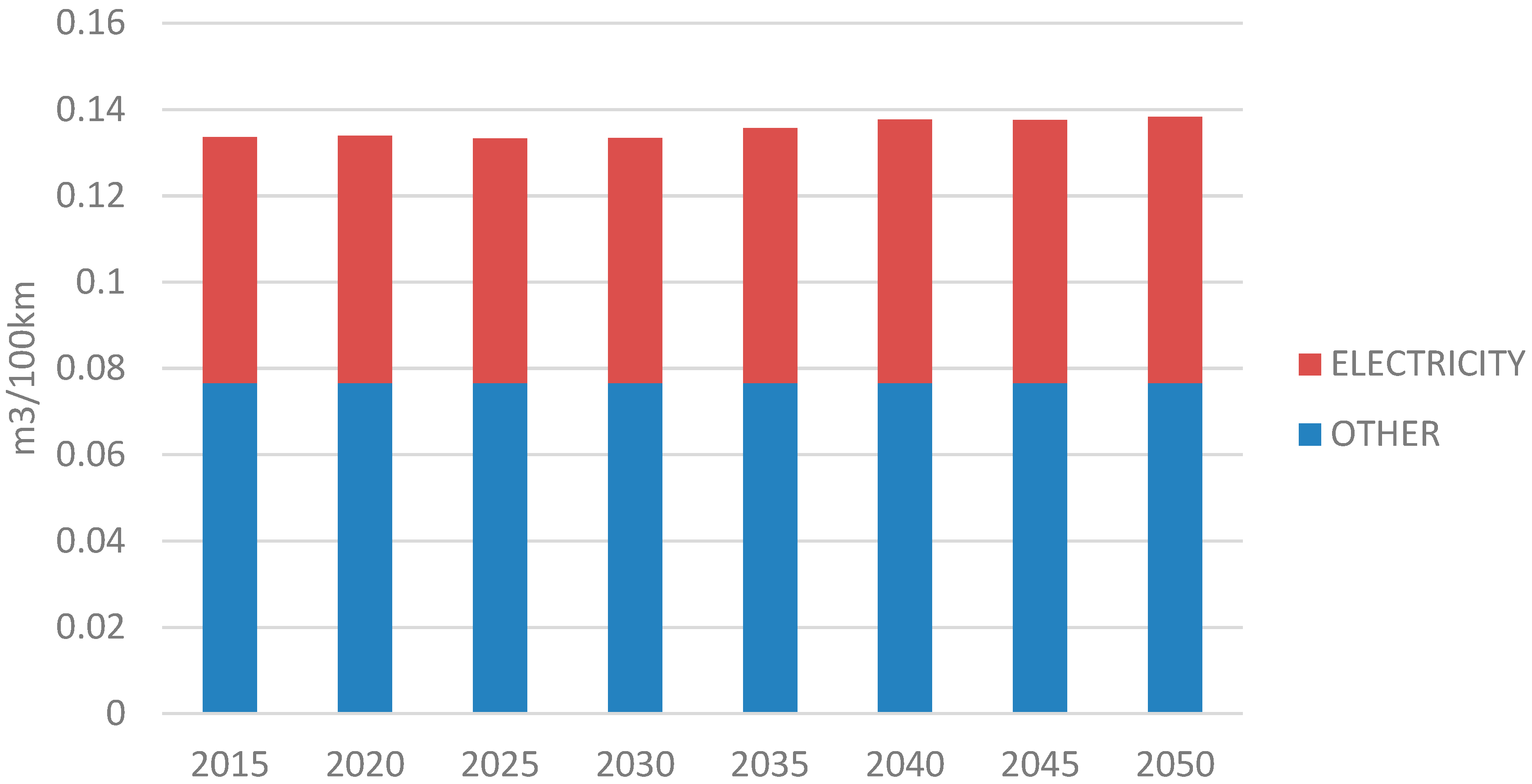 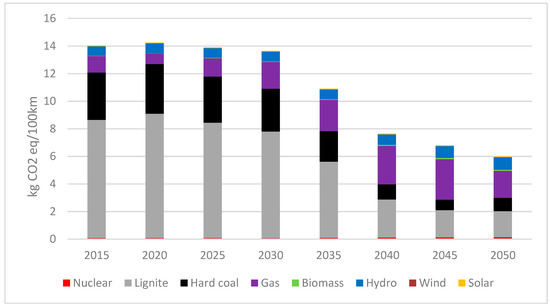 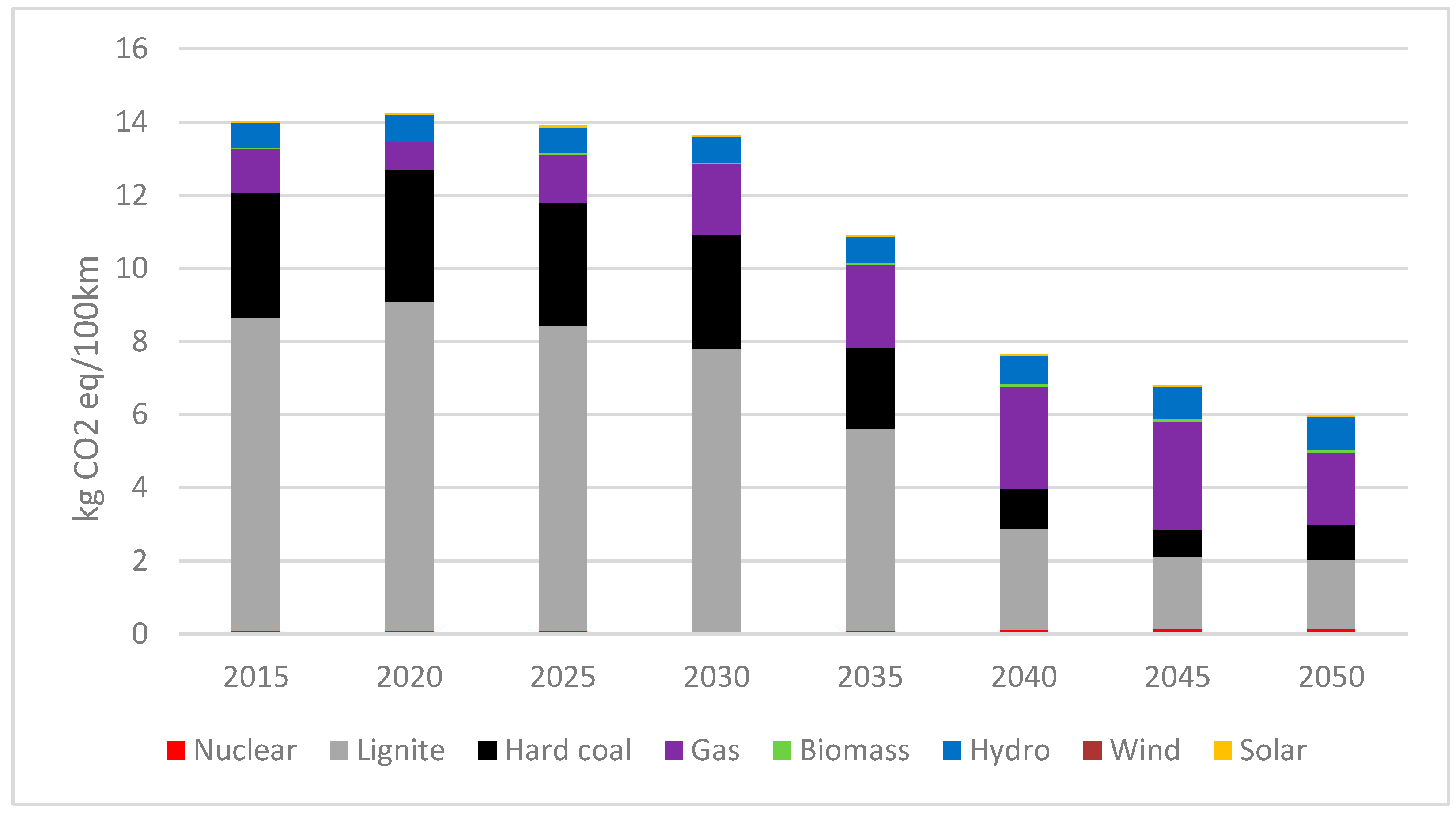 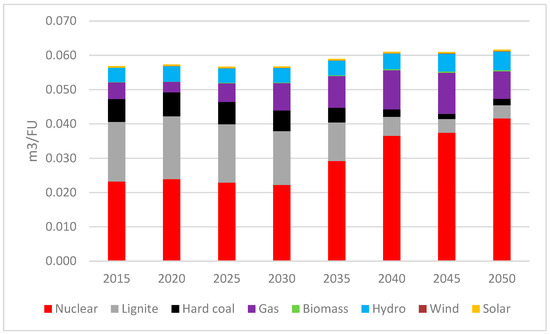 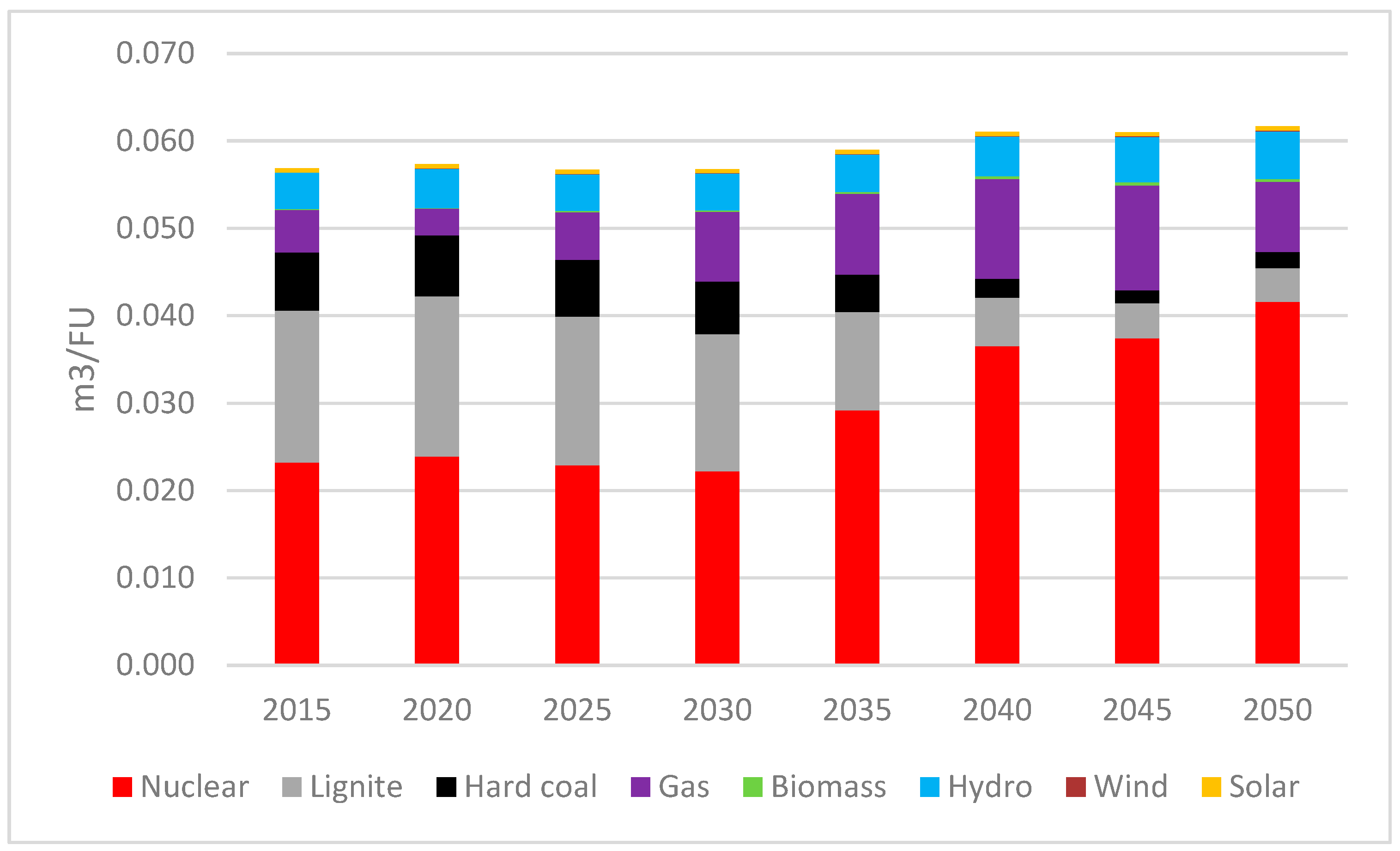