Assessment of Residents’ Exposure to Leisure Noise in Málaga (Spain)

Leisure noise is a continual source of complaints from residents of affected areas, and its management poses a difficult challenge for local authorities, especially in tourist destinations, such as Málaga. The city council of this city has set a goal of mitigating the noise produced by leisure activities. In 2015, it began mitigation actions, starting with the assessment of the noise through a temporal monitoring campaign in two specific areas of the city where leisure activities are prevalent. Beyond the objective assessment of the noise levels through measurements, the research team programmed several communication actions (a) to improve the trust, visibility, and reliability of the noise-monitoring process through press and social networks and (b) to gather the subjective response to noise from residents in the affected areas. The results obtained were very helpful to raise awareness among stakeholders and to support the planning and prioritization of further noise mitigation actions. Furthermore, the research team aimed to analyze the long-term noise indicators and the time-based patterns of noise in different areas, trying to establish conclusions that can be helpful for other areas of the city and testing the applicability of previous leisure noise models for the city of Málaga. The results showed that the noise levels in the leisure areas in Málaga are quite high at night (Ln over 60 dBA in almost every location), especially during weekend nights, where we observed locations with noise levels over 75–80 dBA until late hours of the night. We also made an analysis of the leisure noise models proposed in previous investigations and their performance in the case of Málaga. View Full-Text
Keywords: leisure noise; noise monitoring leisure noise; noise monitoring
►▼ Show Figures 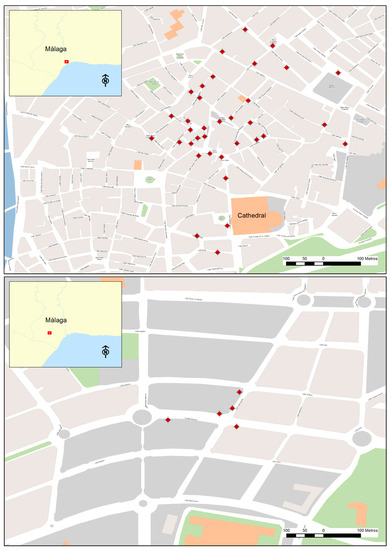