Where to Target Conservation Agriculture for African Smallholders? How to Overcome Challenges Associated with its Implementation? Experience from Eastern and Southern Africa
Previous Article in Journal

Mechanization of Conservation Agriculture for Smallholders: Issues and Options for Sustainable Intensification

A long-term study was carried out in the Zidyana Extension Planning Area (EPA), Malawi and in the Zimuto Communal Area, Zimbabwe, to evaluate the effect of different conservation agriculture (CA) systems on crop productivity, soil quality and economic performance. Maize productivity results from Zidyana showed that CA systems out-yielded the conventional system in seven out of nine cropping seasons. Labour savings relative to the conventional control ranged from 34–42 labour days ha−1 due to reduced time needed to make manual ridges and for weed control, leading to higher net benefits of 193–444 USD·ha−1. In Zimuto, yield benefits were apparent from the second season onwards and there was a much clearer trend of increased yields of CA over time. Greater net benefits (in USD·ha−1) were achieved on CA systems in Zimuto compared with conventional control treatments due to overall higher yields from CA systems. In Zimuto, both increased infiltration and a gradual increase in soil carbon were recorded, which may have contributed to the greater yield response of CA in this area. In Zidyana, yield increases were attributed primarily to enhanced water infiltration since no increases in soil carbon levels were measured. Farmers highlighted critical challenges to the adoption of CA. These will have to be addressed in future research and extension to provide effective solutions to farmers. View Full-Text
Keywords: maize productivity; direct seeding; soil quality improvements; yield benefits; gross margins; economic benefits; farmer perception maize productivity; direct seeding; soil quality improvements; yield benefits; gross margins; economic benefits; farmer perception
►▼ Show Figures 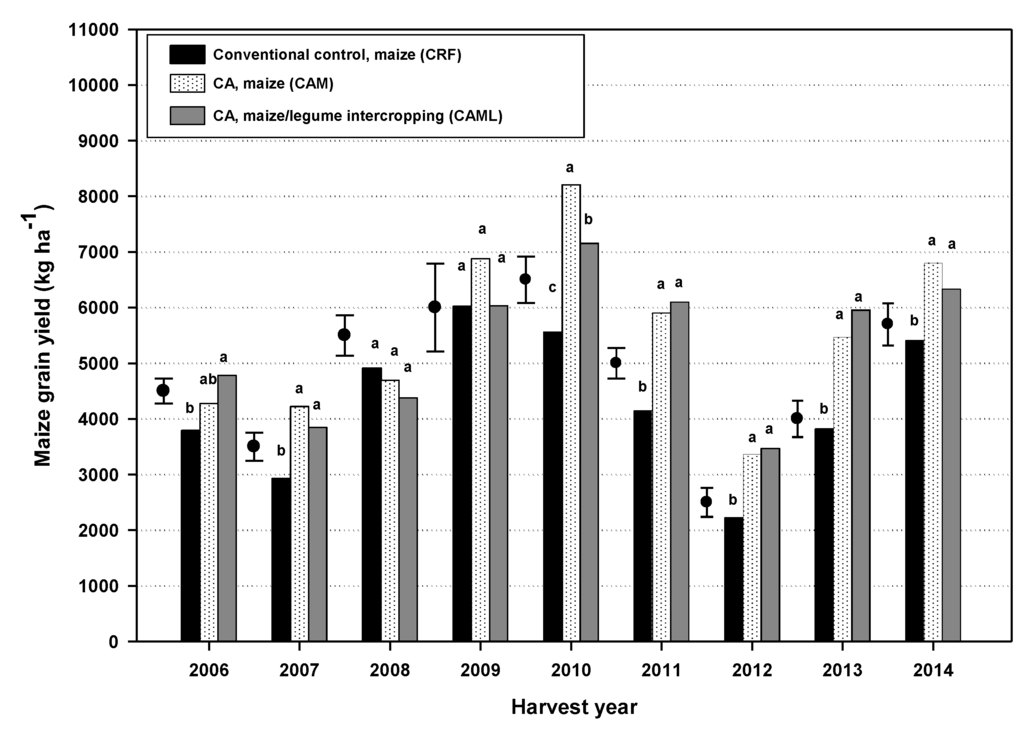