The study area was located at the Qigu and Annan District of Tainan in the Tseng Wen river estuary of Taiwan (Figure 1). In 1945, following the end of World War II, Japan lost the governing polity on Taiwan. From 1974, the Taiwan government started the Ten Major Construction Projects of the infrastructure for transport and industry. The study area covers approximately 86.6 km2. In the past hundred years, this area contained a large lagoon. This lagoon was called the Old Taijiang Inner Sea. In the study area, the river course was changed annually. The study area shows a strong fluvial process indicating that sediments are deposited in the estuary. After the long-term sediment accumulation, a part of the lagoon changed into fish ponds. 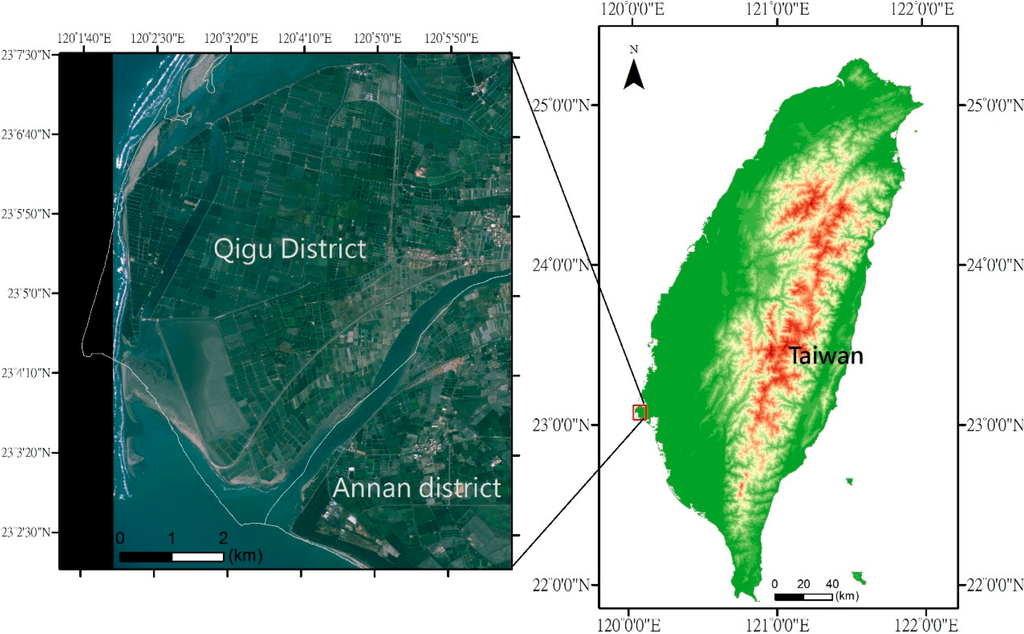 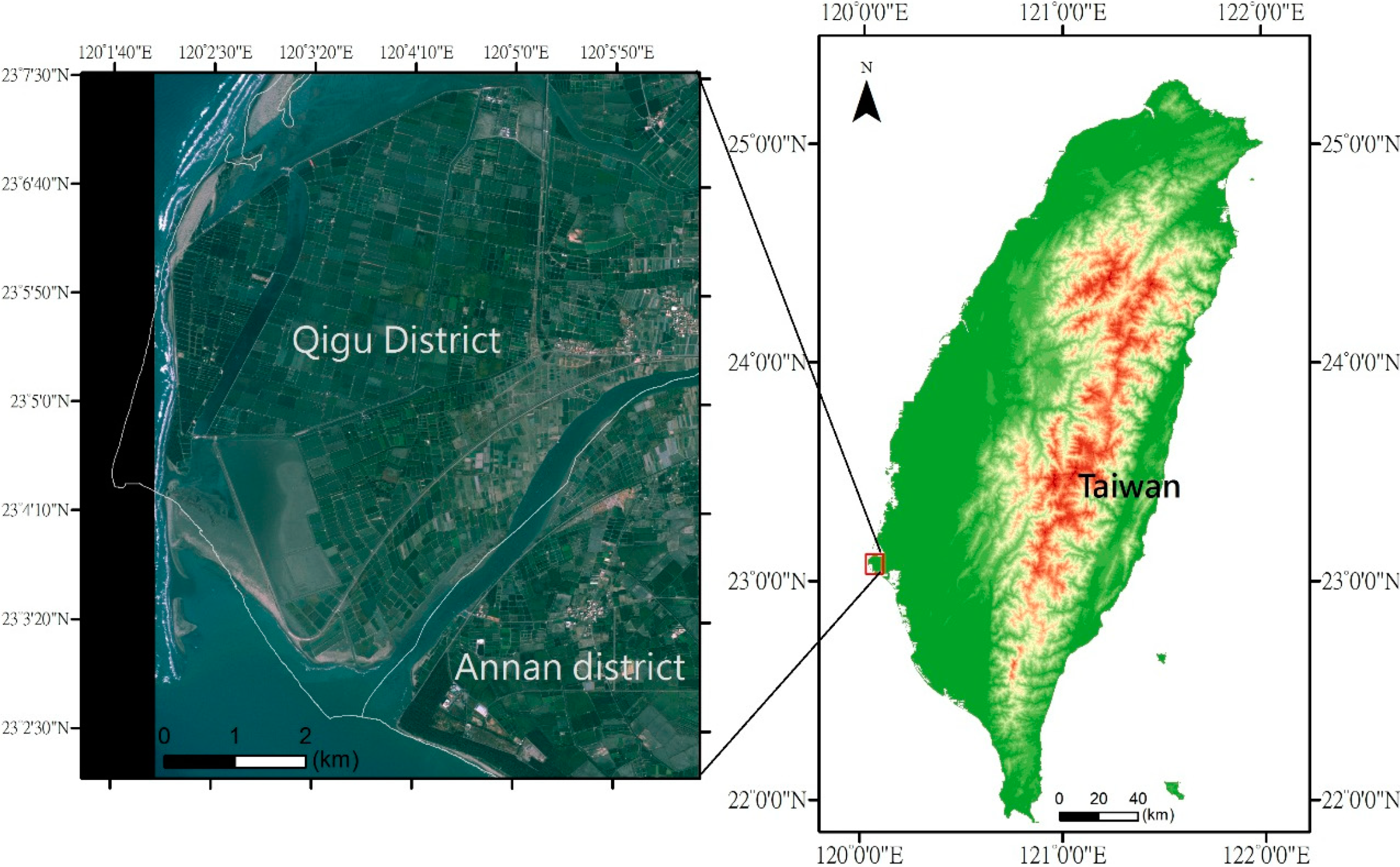 The present study used two historical aerial images for the land-use land-cover change analysis. The U.S. military obtained the first military aerial images in 1947. Six overlapped images were involved in two flights. The resolution of the images was about 1 m. The camera parameters of these images in 1947 were lost and registration could not be made using general photogrammetry software. In the present study, we used SIFT for image matching and automatic image registration.
Second, the Taiwan military obtained the aerial images with camera calibration reports in 1975. Five strips and 100 images were involved. The images were obtained using a metric camera, Zeiss RMK-A 15/23, with a record of the camera calibration report. Thus, these images can follow the general process of aerial triangulation using SOCET GXP software.

Figure 2 shows the workflow of the present study. Aerial images lacked camera parameters in 1947, and the geometry could not be recovered using aerial triangulation. To overcome this problem, we applied SIFT to calculate the affine transformation parameters during image registration. First, we conducted image matching using the SIFT algorithm to obtain the matching points between the two images. Multi-image tie points must be detected in the next step for detailed image registration. The control points were selected and measured from FORMOSA-2 satellite images in the TWD97 (1997’s Taiwan Datum) coordinate system. The final step was the utilization of least-squares to calculate the affine transformation parameters of each image based on control and tie points. In addition, the aerial images in 1975 could be registered based on camera calibration reports. After image registration, the images were combined using a mosaic tool. 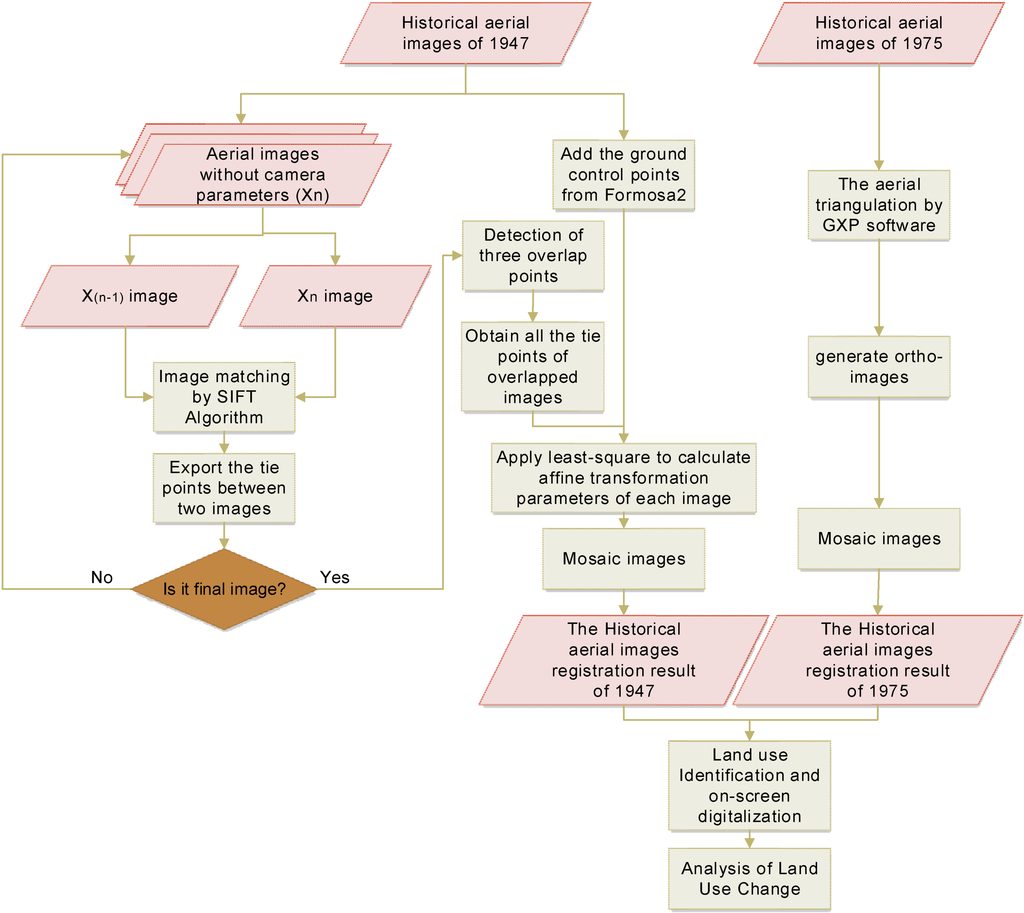 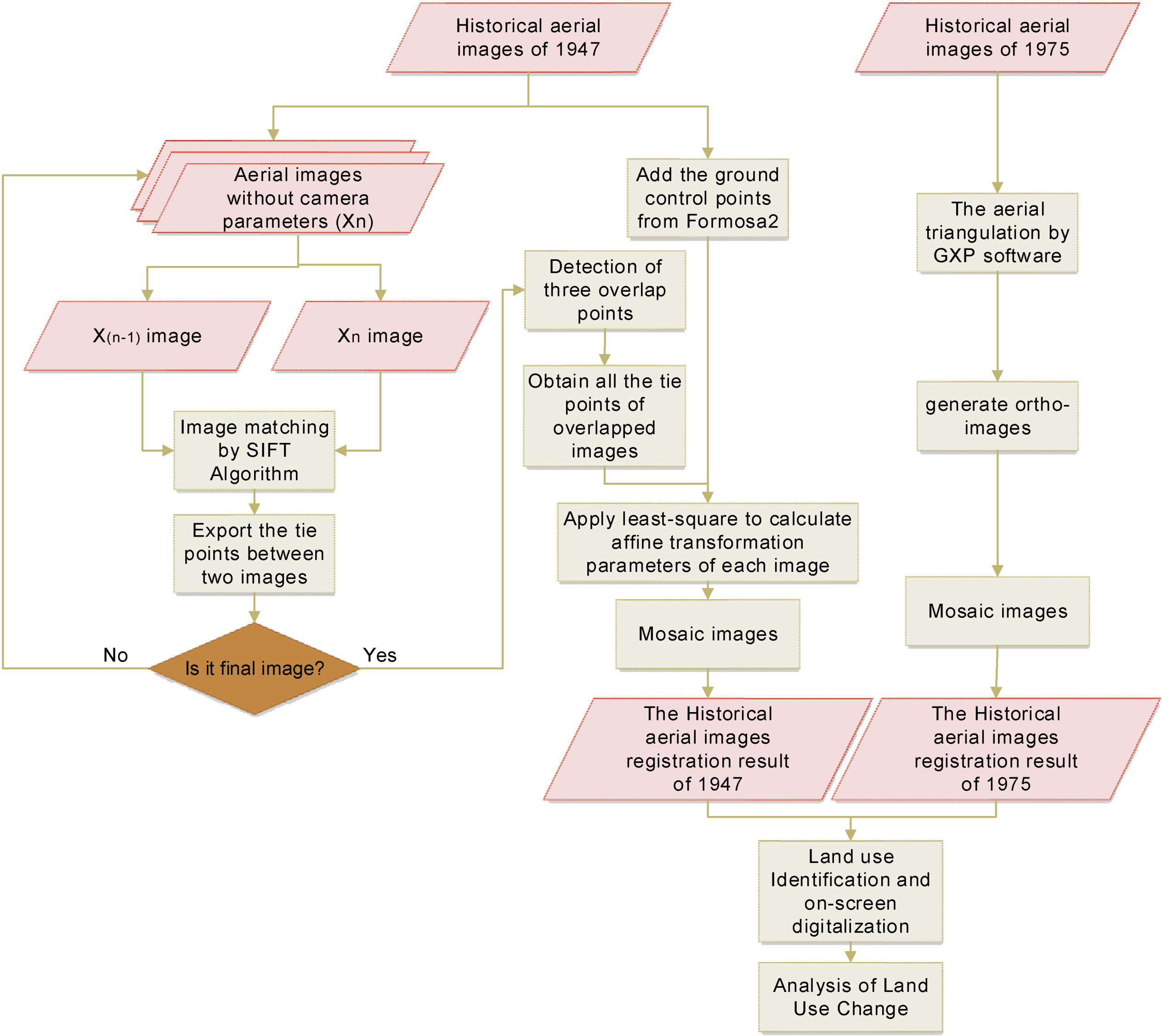 The SIFT algorithm accurately selected the feature points to obtain the tie point of historical aerial images in the overlapped area. The SIFT algorithm was applied to match all the images that lacked camera parameters and automatically obtain the tie points through automatic feature point selection.
SIFT features were first extracted from a set of reference images and stored in a database. The following were the major stages of computation used to generate the set of image features: the first stage of computation searched all scales and image locations. Potential interest points were identified using a difference-of-Gaussian function [4]. One or more orientations were assigned to each keypoint location based on local image gradient directions. The data were transformed relative to the assigned orientation, location, and scale for each feature. Finally, the local image gradients were measured and the keypoints were transformed, allowing significant levels of local shape distortion and change in illumination. 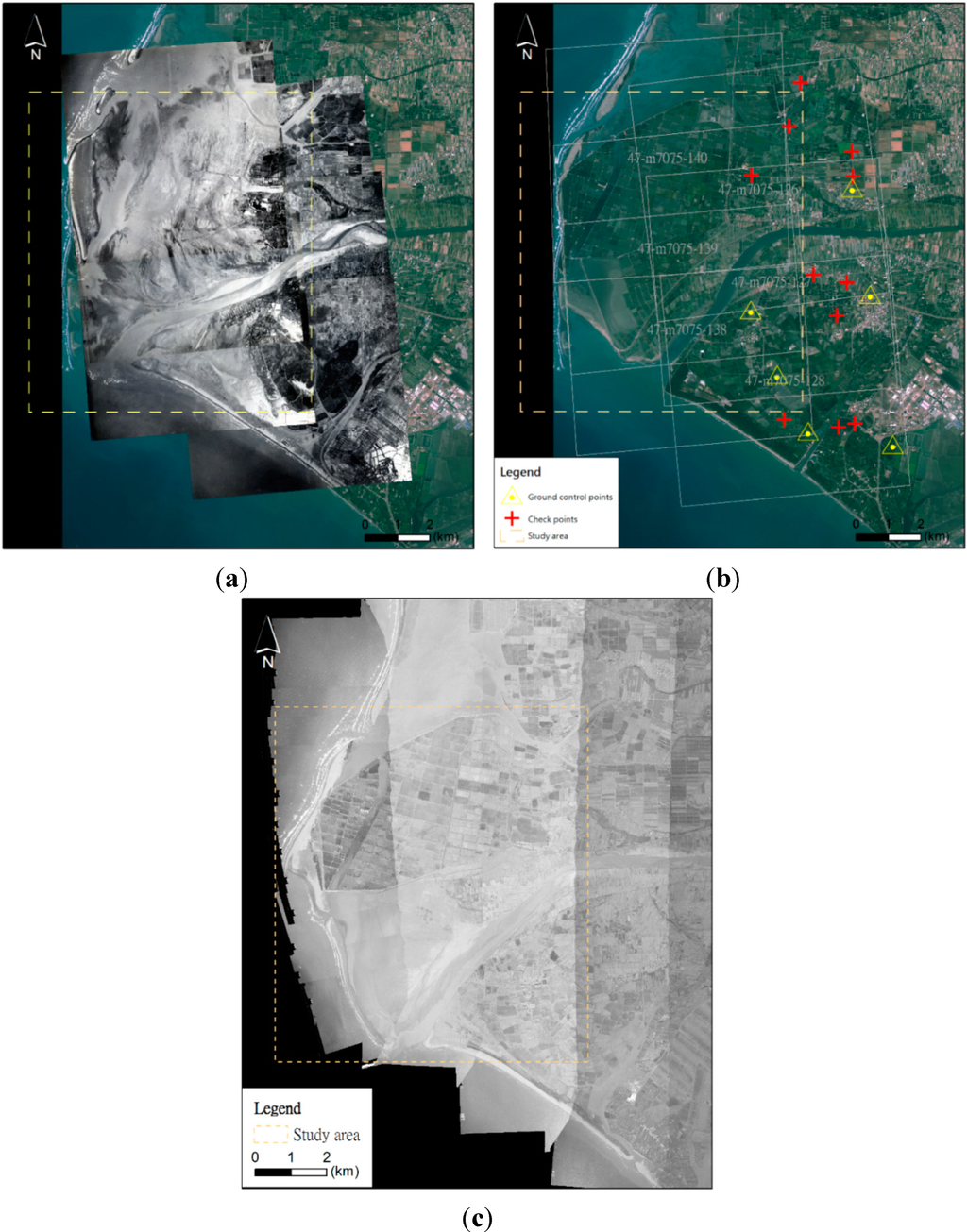 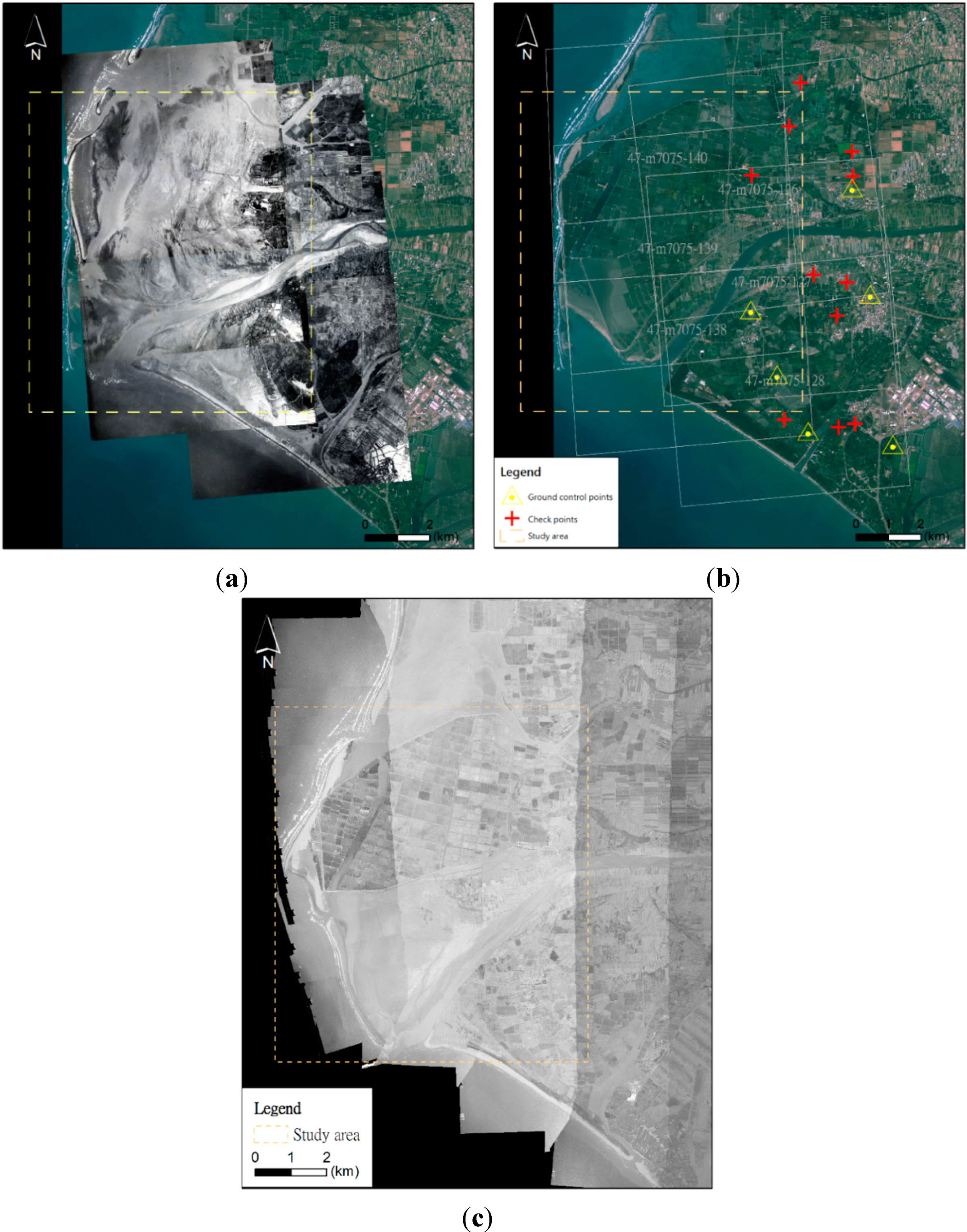 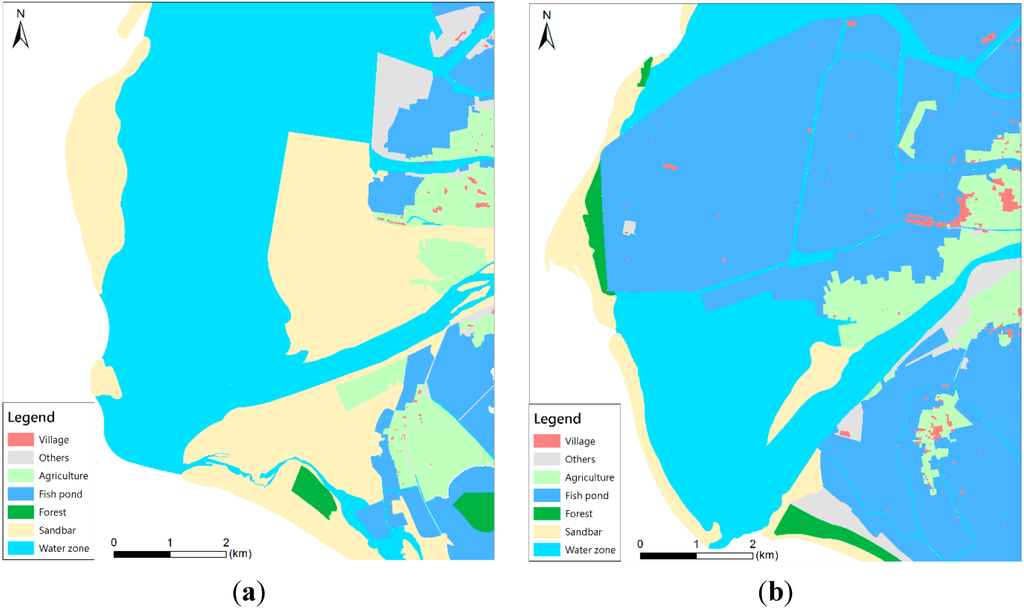 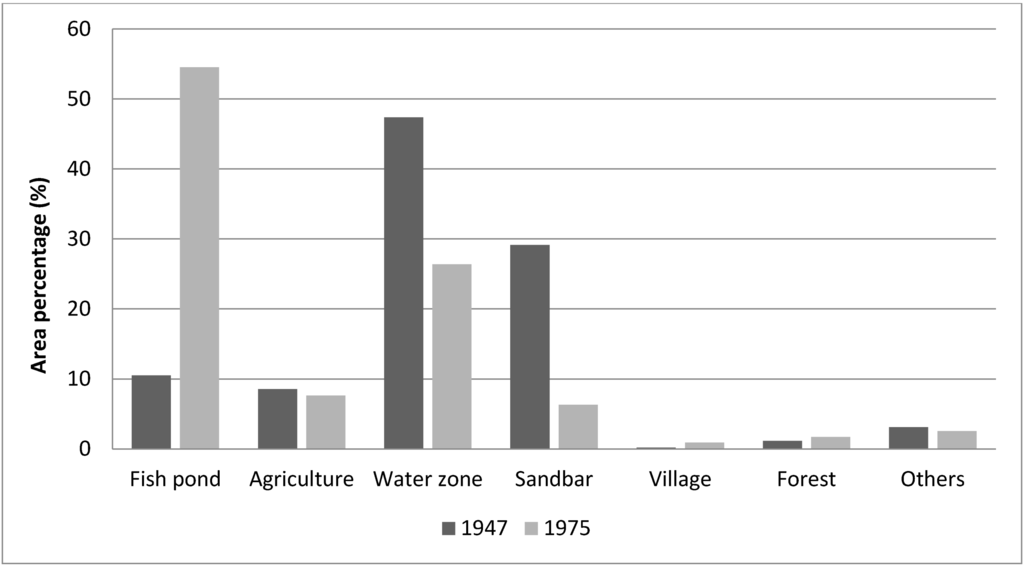 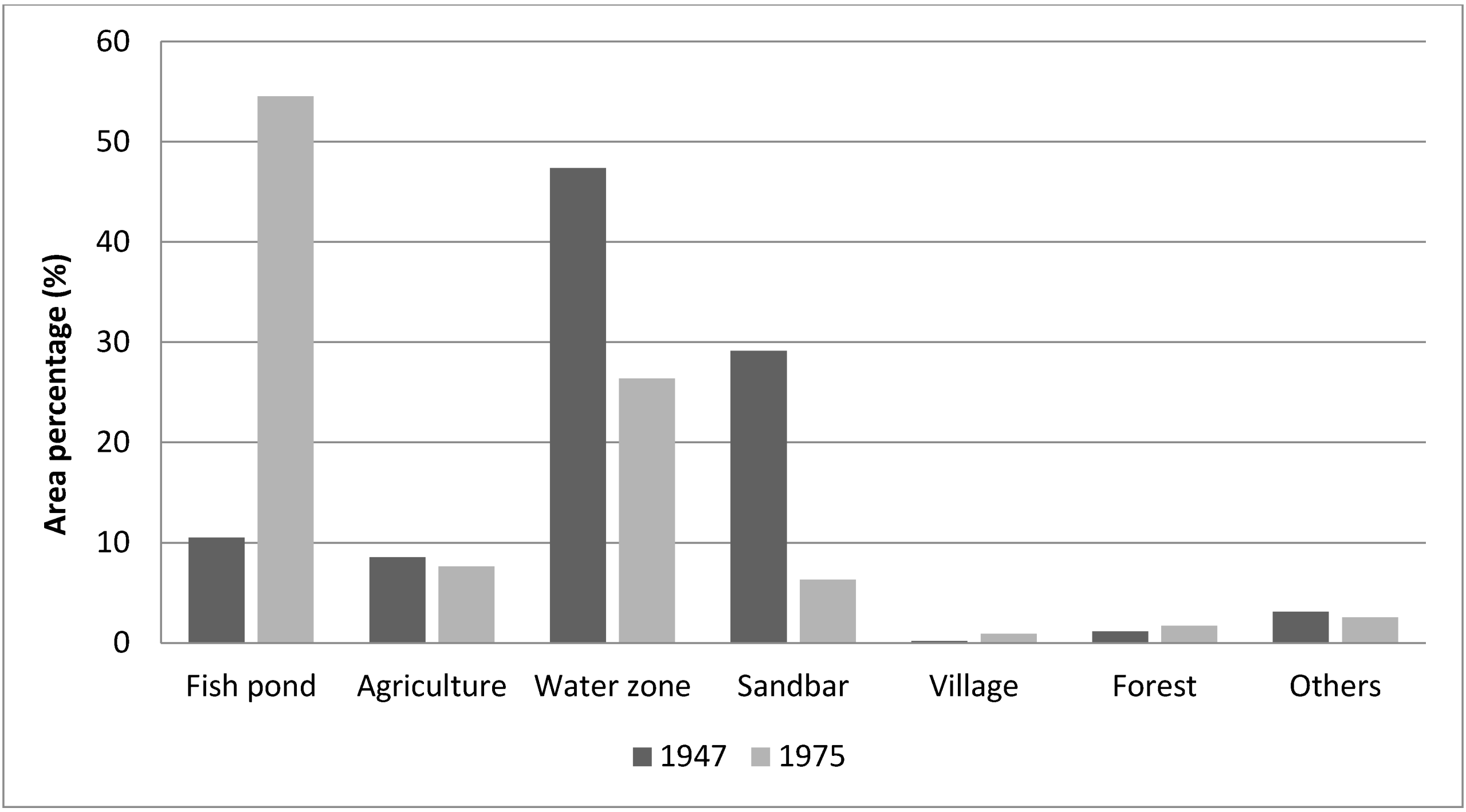 After successfully registering the historical photographs and recent imagery, the series of images were easily applied to detect the land-use land-cover changes between before and after [2].

This study was accomplished land-use land-cover analysis based on historical image registration and on-screen digitizing. The SIFT algorithm provided feature points and performed image stitching efficiently. Then, the six affine transformation parameters of each image simultaneously were calculated based on SIFT features and control points. The present study can automatically obtain image exterior parameters and transform these images from the image coordinate system to the ground coordinate system.
After image registration, historical aerial images comprise crucial spatial datasets for understanding changes in landscape. During this period (1947–1975), fish ponds were built in the sandbar and water zone areas. The water zone and sandbar decreased but the fish pond increased from 1947 to 1975 because of the local economic development in the study area. Long-term land-use land-cover change can be discovered in this region from multiple-period historical aerial images. Historical aerial images were the critical evidences for land-use land-cover change analysis. In the current study, land-use land-cover mapping was based on on-screen digitizing. The land-use land-cover will be automatically classified using a supervised classification approach in the future.

We would like to thank the Center for GIS, RCHSS, Academia Sinica for collecting and providing the historical aerial images for this research.

Fang-Ju Jao performed the experiments and conducted the analyses; Hone-Jay Chu and Yi-Hsing Tseng conceived and designed the research.