C-Phycocyanin and Phycocyanobilin as Remyelination Therapies for Enhancing Recovery in Multiple Sclerosis and Ischemic Stroke: A Preclinical Perspective

Myelin loss has a crucial impact on behavior disabilities associated to Multiple Sclerosis (MS) and Ischemic Stroke (IS). Although several MS therapies are approved, none of them promote remyelination in patients, limiting their ability for chronic recovery. With no available therapeutic options, enhanced demyelination in stroke survivors is correlated with a poorer behavioral recovery. Here, we show the experimental findings of our group and others supporting the remyelinating effects of C-Phycocyanin (C-PC), the main biliprotein of Spirulina platensis and its linked tetrapyrrole Phycocyanobilin (PCB), in models of these illnesses. C-PC promoted white matter regeneration in rats and mice affected by experimental autoimmune encephalomyelitis. Electron microscopy analysis in cerebral cortex from ischemic rats revealed a potent remyelinating action of PCB treatment after stroke. Among others biological processes, we discussed the role of regulatory T cell induction, the control of oxidative stress and pro-inflammatory mediators, gene expression modulation and COX-2 inhibition as potential mechanisms involved in the C-PC and PCB effects on the recruitment, differentiation and maturation of oligodendrocyte precursor cells in demyelinated lesions. The assembled evidence supports the implementation of clinical trials to demonstrate the recovery effects of C-PC and PCB in these diseases.
Keywords: C-phycocyanin; Phycocyanobilin; remyelination; Multiple Sclerosis; stroke; recovery C-phycocyanin; Phycocyanobilin; remyelination; Multiple Sclerosis; stroke; recovery

Myelin is a lipid-rich structure that wraps the axons in a multilayered organization, as cellular membrane extensions of oligodendrocytes (ODs) or Schwann cells in the central or peripheral nervous systems, respectively. These myelin sheaths have a fundamental role in the nervous system, allowing not only the rapid axonal conduction of electrical impulses with minimal energy across considerable distances but also the maintenance of axonal integrity and health through trophic and metabolic support [1]. The crucial importance of myelin for the higher complex functions of mammalian nervous systems can be noticed from their relative composition, as for example, approximately 40% of the human brain consists of white matter, in which 50–60% of dry weight contains myelin as the main component [2]. The impact of myelin loss, defined as demyelination and the formation of new functional myelin sheaths or remyelination, has received increasing attention in recent years and it is now recognized as a major factor involved in the pathogenesis of neurodegenerative diseases, especially Multiple Sclerosis (MS) and Ischemic Stroke (IS) [3].
Behavioral deficits are the most important sequelae in stroke survivors. Although motor dysfunction and its compensatory mechanisms is one of the most widely studied neurological outcomes of cerebral ischemia [4], other serious behavioral disturbances are also involved, such as those involved in executive functions (e.g., planning, initiation, staying mindful of task objectives, prioritizing goals, sequencing activities for specific goals, inhibiting attention to irrelevant/distracting stimuli), aphasia (dysfunction in the expression or interpretation of spoken symbolic language), attention, memory, emotion and sensory processing [5]. The importance of myelin disruption in post-stroke sensory and motor deficits has been highlighted in both clinical and animal studies [6]. In a previous clinical assessment of 42 stroke patients enrolled in 6 neuroprotection trials, Ho et al. 2005 found that white matter occupies a median of 49% of the infarct volume, while 95% of all infarcts involved some regions of the white matter tracts [7]. In a recent study, the magnetic resonance imaging analysis of the ipsilesional corticospinal tract and corpus callosum of 18 survivors suffering from hand motor deficits, in the subacute or chronic stages after subcortical IS, showed that the destruction of myelin sheaths and the associated axonal damage correlated with a poorer motor performance. The authors concluded that degeneration of transcallosal fibers connecting higher order sensorimotor regions may constitute a relevant factor influencing cortical reorganization and motor outcome after subcortical stroke [8]. These findings provide a strong rationale for investigating the effects of myelin loss/formation as well as for developing myelin protective or repairing therapies for IS.
Demyelination is a central pathophysiological hallmark in MS, a chronic inflammatory and neurodegenerative disease of the central nervous system (CNS) that is thought to have an autoimmune etiology [9]. MS patients suffer discrete episodes (“attacks” or “relapses”) of neurological impairments. In the relapsing-remitting stage of the disease (RRMS), patients remain stable between these attacks. However, around 80% of those patients that do not receive any disease-modifying treatment evolve into the secondary progressive phase of the illness (SPMS) within 20 years after the onset [10]. In this subset of patients, the inflammatory-demyelinating injury is disseminated and they experience an insidious worsening of clinical symptoms and the accumulation of neurologic disability unrelated to any acute attacks. A small percentage of patients (10–20%) have a clinical course of primary progressive (PP) MS, in which they only experience insidious worsening and never have acute attacks. The clinical symptoms of MS include numbness, tingling, motor weakness, vision loss, gait impairment, incoordination, imbalance, spasticity, bladder issues, headache and psychological dysfunction such as cognitive problems (slowed information processing, executive dysfunction, impairment of long-term verbal and visual memory), fatigue and depression [11]. These symptoms are the major drivers in the worsening of MS patient’s quality of life, leading to a negative impact on their social, professional and family activities [12]. In an Australian epidemiological study involving 1329 MS patients, Simmons et al. 2010 showed that between 2003 and 2007, despite being a period of relative national economic prosperity, 56% of them had lost their jobs due to MS, primarily caused by the ineffective management of MS neurological symptoms at the workplace [13]. Until 2016, all disease-modifying MS therapies were approved for relapsing forms of the disease, acting primarily by modulating or suppressing the immune system to reduce relapse rates and magnetic resonance imaging measures of inflammation but these medications are unable to effectively reverse the chronic (progressive) phase of the disease [14]. More recently, after three positive clinical trials [15,16], Ocrelizumab (OcrevusTM)—a humanized anti-CD20 monoclonal antibody—was approved in March 2017 by the U.S. Food and Drug Administration for the treatment of both the relapsing forms of MS and PPMS [17]. However, none of these drugs directly improve the remyelination process and therefore their ability to regenerate and promote the chronic repair of MS lesions is limited [18]. It is therefore imperative to design novel therapeutic strategies aimed at promoting remyelination in the CNS, preferably at the early stages following the onset of MS, which may stop the decline toward the progressive phase of the disease. During this progressive phase of MS, acute inflammatory relapses are scarce but there is increasing loss of neuronal function and extensive demyelination and thus, the stimulation of endogenous remyelination would potentially have the greatest clinical impact [19].
This review provides a summary of preclinical evidence supporting the application of two naturally occurring compounds, C-Phycocyanin and Phycocyanobilin, as potential agents for promoting neural tissue regeneration in MS and IS, primarily focused on their remyelination inducing properties. We will present, discuss and comment results from our group and other authors demonstrating the beneficial actions of these compounds in experimental models of MS and IS as remyelination inducing agents, which support their medical application for these diseases.

C-Phycocyanin (C-PC), the main biliprotein of the cyanobacteria Spirulina platensis [20] and its associated open-chain tetrapyrrole chromophore named Phycocyanobilin (PCB) [21,22,23] exhibit an array of biological properties such as antioxidant and anti-inflammatory characteristics, in addition to immunomodulatory actions [24]. For more than a decade, our group has been exploring different experimental approaches to identify the pharmacological properties of C-PC and PCB, including their neuroprotective and neurorestorative activities. These are linked not only to their well-known antioxidant, free radical scavenging and anti-inflammatory properties [25,26] but also to the modulation of the expression of several genes associated with other biological processes.

3. Mechanisms of Remyelination: An Overview

Remyelination is a restorative phenomenon in which new myelin sheaths are formed on demyelinated axons following an injury to the nervous system. However, this regenerative process is limited in MS, mainly owing to the failure of the oligodendrocyte precursor cells’ (OPCs) recruitment into the lesions and the inability of these cells to differentiate into myelinating ODs [27,28]. OPCs are present throughout both gray and white matter in the CNS and have “stem cell-like” properties such as multipotency and self-renewal [29]. In response to demyelination, OPCs must proliferate and migrate to the lesion site [30] where they differentiate into mature ODs, extending processes to remyelinate denuded axons [31] and consequently, saltatory conduction is restored and axons are protected from further degeneration [32]. In some paradigms, while axons are not fully protected, their degeneration is substantially delayed, where motor deficits do not re-appear until much later in time [33]. Several factors may perturb any of these stages, or even the disruption of one phase may affect the others [34]. Using autopsy samples from MS patients, OPCs have been found in chronically demyelinated lesions, with a density similar to those in the developing rodent brain but unable to sheathe the injured dystrophic and swelled axons [35]. Even in OPCs that differentiate, contact and enwrap axons, the final maturation into compact myelin may be interrupted [36]. Similarly, the susceptibility of white matter to stroke has been associated to the vulnerability of OPCs to a diversity of insults, including oxidative stress, trophic factor deprivation, excitotoxicity and the activation of apoptotic pathways [37]. This suggests that cellular and molecular interactions in the microenvironment of demyelinated lesions, including axons, astrocytes, immune cells, microglia, OPCs and premyelinating ODs, are limiting factors for effective remyelination [38]. Thus, at least two general strategies may be envisioned in order to enhance remyelination either in MS or IS: to promote the recruitment and differentiation of OPCs into the lesion areas; and to overcome inhibitors of OPCs maturation present within these lesions [39,40].

In summary, in the current review we present preclinical evidence indicating a remyelinating effect of C-PC and its tetrapyrrolic linked compound, PCB, in models of MS and IS. We discussed previous studies from our group showing that C-PC, given in therapeutic regimens, promoted white matter regeneration in the CNS of rats and mice affected by EAE. In particular, we presented new quantitative evidence of myelin formation in these models induced by C-PC, as assessed by the well-known g-ratio parameter in electron microscopy studies. Similarly, the g-ratio assessment of PCB effects in cerebral cortex samples from ischemic rats revealed a potent remyelinating action of this compound after the stroke. Among the multiple molecular mediators involved in such effects, we discussed the role of Treg induction, the control of pro-oxidant chemical species, the limitation of deleterious pro-inflammatory mediators, the modulation of gene expression, the inhibition of COX-2 and the induction of BDNF, as well as other biological processes that could be responsible for the actions of C-PC and PCB on the recruitment, differentiation and maturation of OPCs in demyelinated lesions present in MS and IS. The accumulated evidence supports the clinical application of these compounds as remyelinating therapies for enhancing the patient recovery in neurological diseases having a high disability incidence such as MS and IS.

The authors would like to acknowledge Miriam Ribas for her assistance with language corrections. 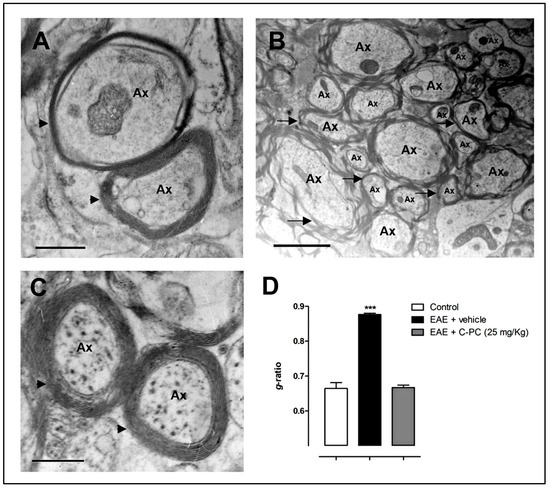 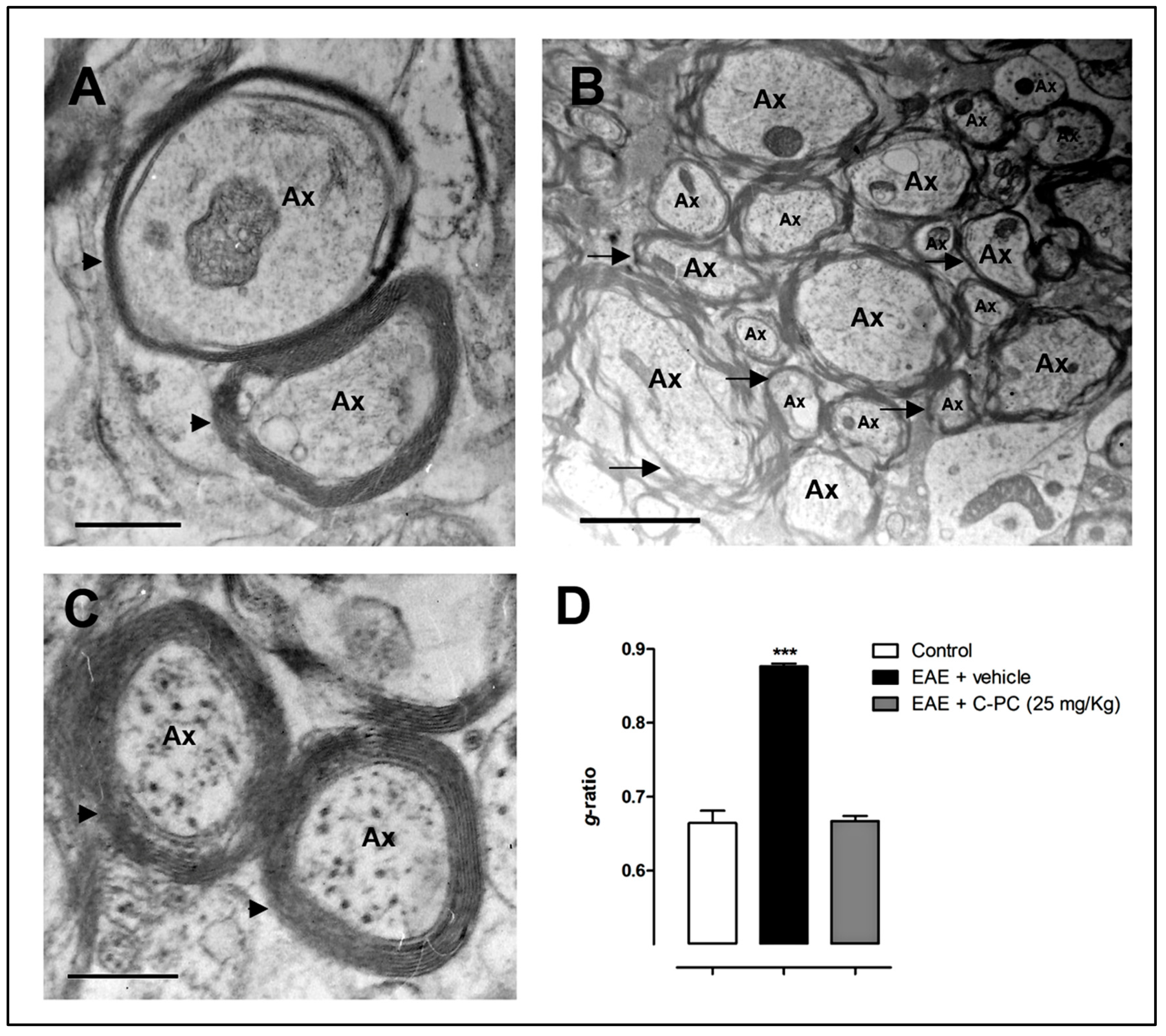 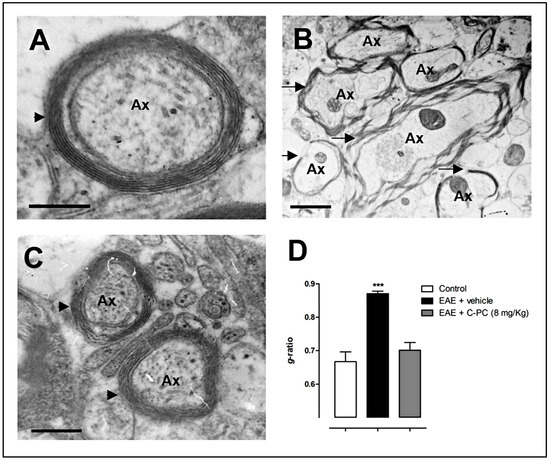 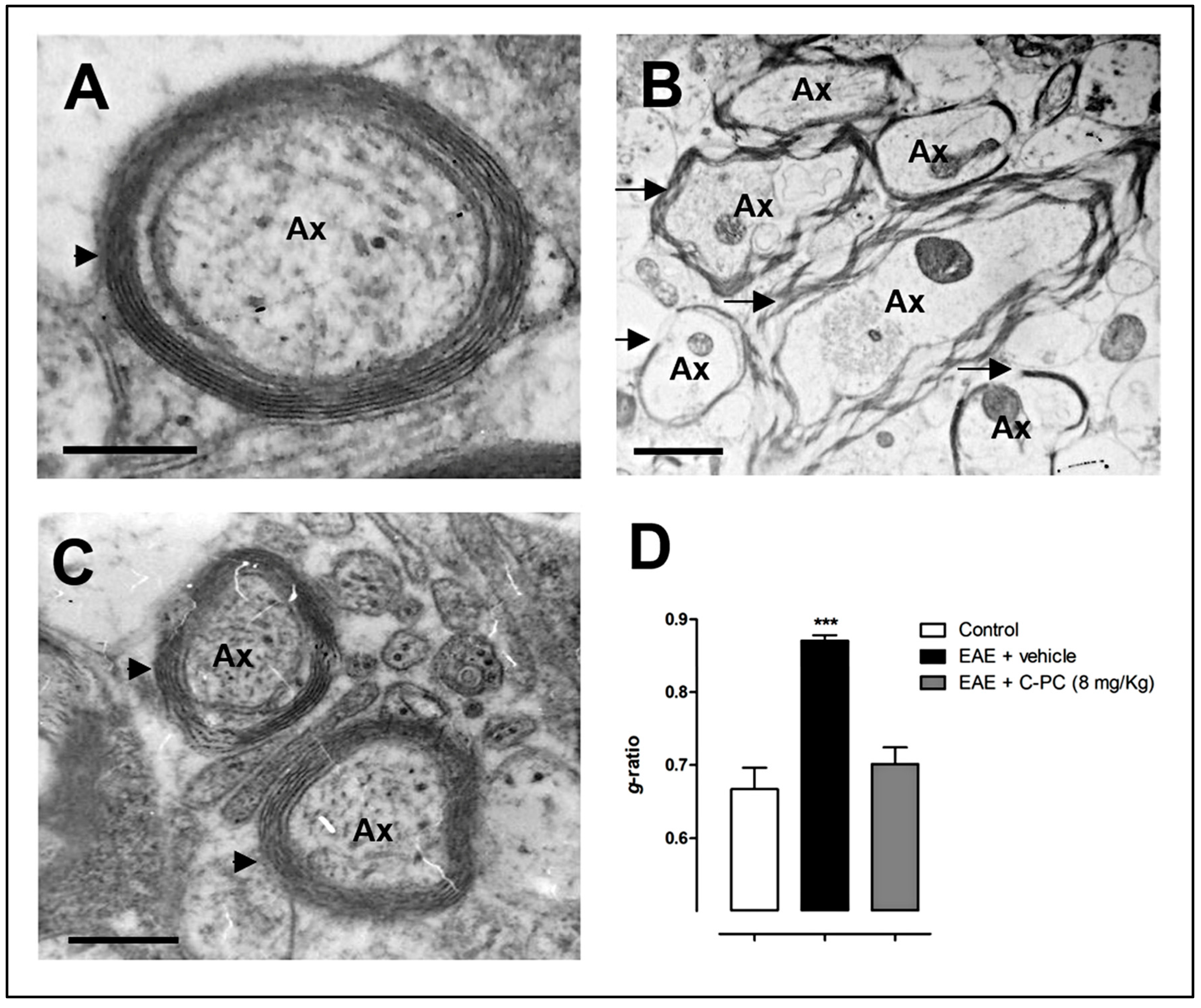 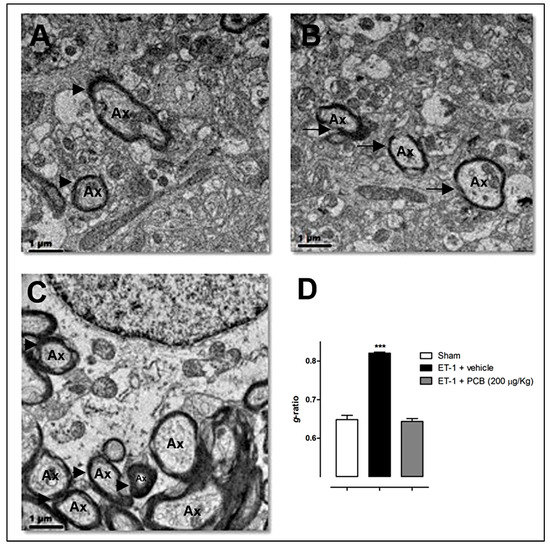 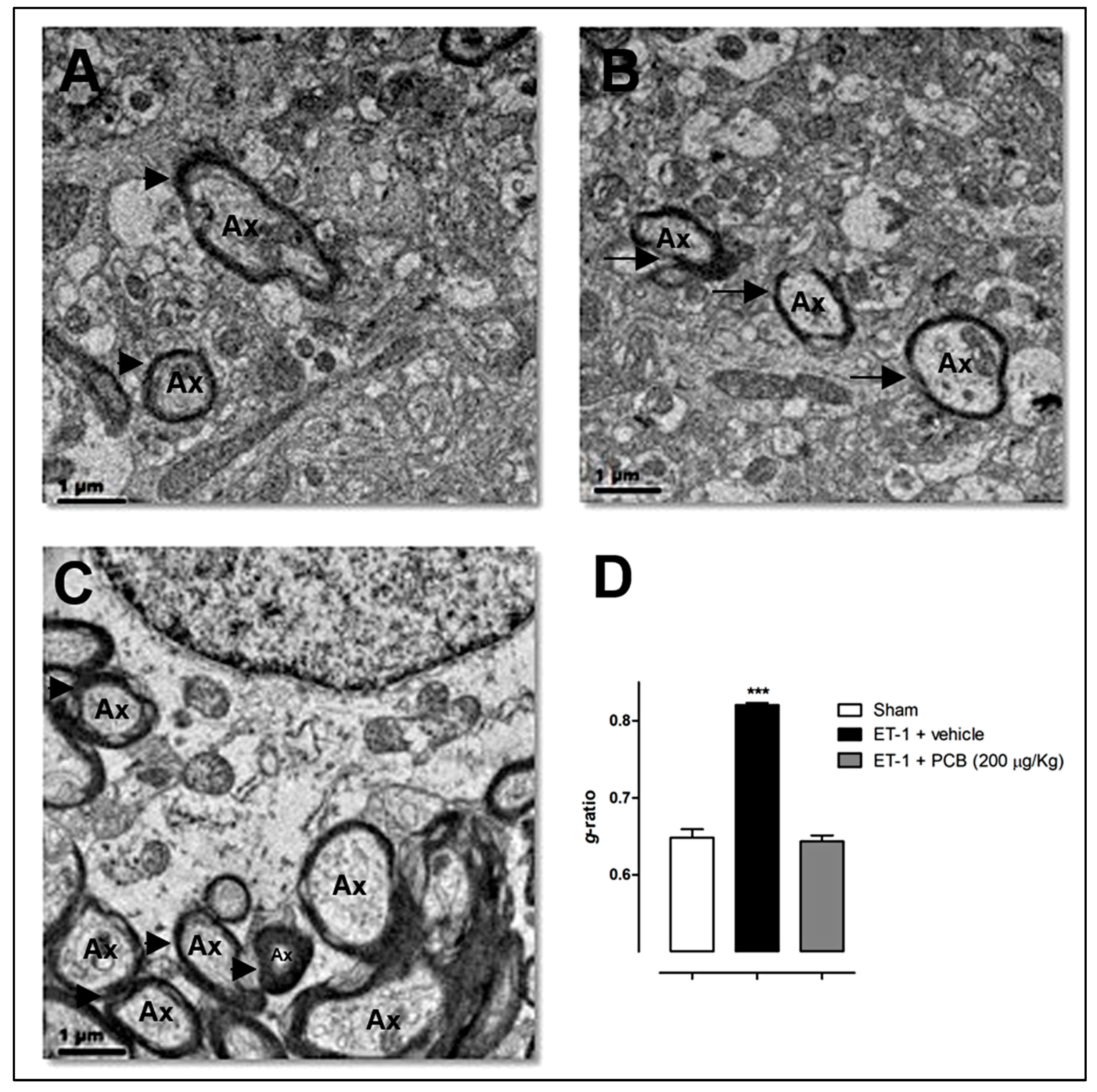