Details of the Contents of Paranoid Thoughts in Help-Seeking Adolescents with Psychotic-Like Experiences and Continuity with Bullying and Victimization: A Pilot Study
Previous Article in Journal

Views of People with Diabetes Regarding Their Experiences of the Facilitators and Barriers in Type 1 Diabetes Inpatient Care: An Interpretative Phenomenological Analysis

(1) Introduction: Drug-related deaths in the UK are at concerning high levels. The unknown content and purity of illicit substances can cause unpredictable adverse effects and thus a public health risk with no sign of abating. On-site drug checking is a public health strategy that has previously been implemented, predominantly in festival settings, but without Home Office licensing. (2) Aims: The aim of this study was to pilot the UK’s first pharmacist-led, Home Office-licensed community drug checking service. (3) Methods: A bespoke protocol incorporating legally, professionally and ethically binding documents was implemented. This free, confidential service ran between February and March 2019, was available to anyone over 18 who were purposefully recruited, gave informed consent and agreed to relinquish their drug sample. Samples were checked on-site within an established Substance Misuse Service (SMS) using a handheld Raman spectrometer to determine likely drug content and adulterants. In parallel, participants completed a questionnaire about their substance use and the drug sample(s) being tested. A pharmacist-led multidisciplinary approach was adopted to discuss the analytical findings. Informed by the results of the analysis and the questionnaire, people who used the service received tailored harm reduction advice. (4) Results and Discussion: The pilot operated for a total of four days over four weeks. Eleven people visited and relinquished a total of thirteen samples. Half of the participants had previously overdosed and were known to the SMS. Seventy per cent were male, all were White British individuals, 30% were employed and two people disclosed visiting from another nearby town. Samples included what was thought to be heroin, synthetic cannabinoids, stimulants, benzodiazepines and LSD and none required activation of the “alerts cascade” process. Most participants drank alcohol regularly and the concomitant use of traditional illicit drugs and prescribed medication (including opioids, anxiolytics and antidepressants) with sedating profiles was common. Given some of the ethical decisions and interpretation of the results, specialist pharmacist involvement was deemed essential. (5) Conclusions: This pilot demonstrated the proof-of-concept that a pharmacist-led Home Office-licensed drug checking service can be successfully implemented in community SMSs. View Full-Text
Keywords: drug checking; harm reduction; Home Office; Raman spectroscopy; substance misuse; overdose; opiates; opioids; cannabinoids; drug testing; pill testing drug checking; harm reduction; Home Office; Raman spectroscopy; substance misuse; overdose; opiates; opioids; cannabinoids; drug testing; pill testing
►▼ Show Figures 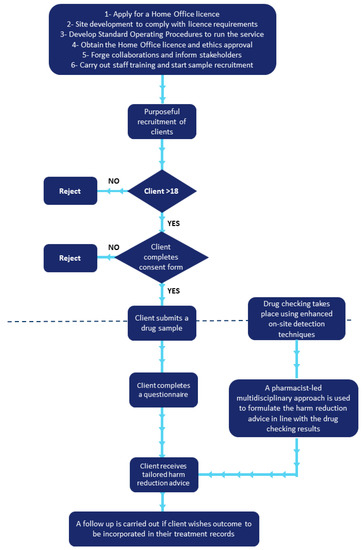