Double Burden of Malnutrition (DBM) and Anaemia under the Same Roof: A Bangladesh Perspective

The double burden of malnutrition (DBM) and anaemia is a growing concern in developing countries. Using the cross-sectional Bangladesh Demographic Health Survey, 2011, 5763 mother–child pairs were examined. In households where the mother was overweight, 24.5% of children were stunted, 19.8% underweight, 9.3% wasted, and 51.7% anaemic. Significant regional differences were found in DBM and anaemia as well as drinking water source, while DBM alone was more common in more well-off households (based on wealth index) and where the father was employed in skilled or service occupations. More policy and awareness programmes are needed to address the coexistence of child undernutrition and maternal overweight/obesity and anaemia in the same household.
Keywords: double burden of malnutrition; anaemia; undernutrition; overweight; obesity double burden of malnutrition; anaemia; undernutrition; overweight; obesity

The number of undernourished people in the world increased from 777 million to an estimated 815 million in 2016. At the same time, adult obesity continues to rise in all regions. Multiple forms of malnutrition therefore co-exist, with countries experiencing simultaneously high rates of child undernutrition and adult obesity [1]. Maternal and child double burden (MCDB) can be defined as an overweight mother paired with an undernourished child. Nutrition disparities are more evident in low- and middle-income countries (LMICs) with higher prevalence of undernutrition, overweight or obesity (overnutrition), or both [2,3]. The social determinants of health (SDoH) have been consistently associated with both undernutrition in children and overweight in mothers [4,5,6]. The overall anaemia prevalence among children less than 5 years old is 54.2% in 52 low, lower-middle, and upper-middle countries according to the Demographic and Health Survey (DHS) data, collected between 2005 and 2016 [7].
In Bangladesh (Figure 1), the prevalence of child undernutrition decreased from 51% to 36% between 2004 and 2007 due to economic growth. On the other hand, maternal overweight increased from 9% to 24% over the same time period [8]. The association between socio-demographic factors and the double burden of malnutrition (DBM) has been examined in several studies [9,10,11,12,13,14,15,16,17,18,19] around the world. In Guatemala, stunted child and overweight mother (SCOM) was more prevalent among poor and middle socioeconomic status groups as compared to the rich households [9]. In Latin America, Mexico, Brazil, Columbia, and Africa, poor maternal education and low socioeconomic status were associated with DBM [10,11,12,13]. On the other hand, studies in China, Indonesia, Vietnam, India, and Bangladesh showed that DBM is more prevalent among high-income households compared to low-income households [14,15,16,17,18]. Jehn et al. used Demographic and Health Survey datasets from 18 lower- and middle-income countries and found that lower level of maternal education, number of siblings, and relative household poverty were associated with DBM [19]. In Bangladesh, only a few small-scale community-based studies have been undertaken with regard to DBM, and no nationwide studies have been undertaken [20].
The present study uses a nationally representative sample from Bangladesh to examine the coexistence of overweight mothers with undernourished (stunted, underweight, and wasted) and anaemic children living in the same household. The study also examines the differences in DBM and anaemia in relation to a number of socio-economic variables. This study provides important information on the reality of the health of the mother and the child in a developing country such as Bangladesh.

The data source for this research was the Bangladesh Demographic and Health Survey (BDHS), 2011. The DHS programmes are nationally representative, cross-sectional household surveys. They provide a wide range of information mainly related to population, health, and nutrition. The sample design used in DHS surveys is mainly based on a two-stage cluster format. In the first stage, enumeration areas (EAs) are generally drawn up from census information. Secondly, a sample household is drawn from each selected EA. Demographic and Health Survey data are representative at the national level, residence level, and regional level [9].
BDHS 2011 obtained informed consent from the participants before the survey. The contents of the household and individual questionnaires were based on the Monitoring and Evaluation to Assess and Use Results (MEASURE) DHS model questionnaires. Ethical permission was obtained by the Macro International Inc. Institutional Review Board on 22 February 2011 when the DHS were carried out, with ICF Macro Project Number: 631561.0.000.00.091.01. All data in the present study were anonymous and no additional ethical permission was required. BDHS used five types of questionnaires: a Household Questionnaire, a Woman’s Questionnaire, a Man’s Questionnaire, a Community Questionnaire, and two Verbal Autopsy Questionnaires to collect data on causes of death among children under age 5. These model questionnaires were adapted for the use in Bangladesh during a series of meetings with a Technical Working Group (TWG) that consisted of representatives from National Institute of Population Research and Training (NIPORT); Mitra and Associates; International Centre for Diarrheal Diseases and Control, Bangladesh (ICDDR,B); United States Agency for International Development (USAID)/Bangladesh; and MEASURE DHS. Draft questionnaires were then circulated to other interested groups and were reviewed by the 2011 BDHS Technical Review Committee [9]. Fieldwork for the 2011 BDHS was carried out by 16 interviewing teams, each consisting of one supervisor, one field editor, five female interviewers, two male interviewers, and one logistics staff member. Data collection was implemented in five phases, starting on 8 July 2011 and ending on 27 December 2011. In addition, during 2–19 January 2012 there were re-visits to collect blood samples from respondents interviewed during Ramadan who had agreed to participate in blood testing but declined to be tested during Ramadan. Fieldwork was also monitored through visits by representatives from USAID, Inner City Fund (ICF) International, and NIPORT [9].
A total of 18,222 ever-married women aged 12–49 were identified in these households, and 17,842 were interviewed, yielding a response rate of 98 percent. In one-third of the households, ever-married men over age 15 were eligible for interview. Because there were only 90 ever-married women aged 12–14 (less than one percent), these women were excluded. Children aged from 0 to 59 months were selected. Only the first child of each family was selected. Only children and their mothers having anthropometric information (height and weight) and all the socio-economic variables were included. Finally, 5783 mother–child pairs were selected based on the abovementioned criteria. The principal reason for nonresponse among women and men was their absence from home despite repeated visits to the household. The response rates do not vary notably by urban–rural residence.
Following WHO recommendations, any children with height-for-age Z-score (HAZ) and weight-for-age Z-score (WAZ) either above +6 or below −6 and Weight for Height Z-score WHZ above +5 or below −5 were excluded. For women, anthropometric measurements above and below 4 standard deviation (SD) were considered outliers and were excluded from the data [22]. Children and women lacking information for any of the socio-economic variables of the study were also excluded. In total, 5763 mother–child pairs with complete information were analysed. The total number of mother–child pairs having haemoglobin data was 1661. The smaller sample size for haemoglobin concentration data was because BDHS chose to only take a sample of blood from every third household. No significant differences were found between mother–child pairs with complete or incomplete information.
The nutritional status was assessed using anthropometry (body mass index (BMI) in mothers and stunting, underweight, and wasting in children) and anaemia status of mother–child pairs. Height and weight were measured using standard procedures by trained staff. Children younger than 2 years were measured lying down (recumbent length) on an anthropometric board, while standing height was measured for older children and mothers. For weighing of children and mothers, a weighing scale was used which allows for weighing of very young children through an automated mother–child adjustment that eliminated the mother’s weight while she was standing on the scale with her baby. Haemoglobin concentration was determined using a Hemocue (Radiometer Medical ApS, Copenhagen, Denmark), a portable photometer which uses the absorption of light from a single drop of blood to measure haemoglobin concentration. Maternal BMI was categorised into three categories of underweight (BMI < 18.5), normal (18.5 to 24.9), and overweight (≥25.0) and stunting, underweight, and wasting by z-scores of <−2.00 of height-for-age, weight-for-age, and weight-for-height, respectively, following the WHO guidelines [22]. All mother–child combinations, e.g., of BMI and stunted and not stunted children, were included in the analyses, but only data on overweight mothers with undernourished children are presented in the results.
χ2 testing and sequential multinomial regression analysis was performed to examine the association between maternal and child nutritional status and the socio-economic variables. Initially the analyses removed the linear and quadratic effects of age and sex before testing for the significance of a socio-economic variable. Later, after removing the linear and quadratic effects of age and sex, all the socio-economic variables were entered into the model except for the variable of interest. In χ2 test, Cramer’s V was used to observe the effect size. In the analyses, one category with a socio-economic variable has to be the reference value, and Region Sylhet was chosen (arbitrarily). IBM SPSS 21 (IBM, New York, USA) software was used in data analysis, and the cut-off for significance was p < 0.05.

The occurrence of maternal overnutrition and child undernutrition in the same household was observed in the current study. Of the total sample of overweight mothers, 24.5% had stunted children, 19.8% underweight children, 9.3% wasted children, and 51.7% anaemic children. However, there was significant heterogeneity in the occurrence of the DBM, as can be seen in Table 1.

The increasing number of overweight mothers is becoming a new health concern for Bangladesh. The results of this recent study clearly show that double burden exists in Bangladesh and in the same household. Apart from that, the co-existence of overweight mother and undernourished children in the same household portrays the complex dynamics of possible causes. Future longitudinal studies are needed to understand the factors linked to DBM risk. The interaction between maternal overweight/obesity and early childhood undernutrition can be identified and addressed by effective large-scale population studies to reduce the long-term risk of obesity in the offspring.

The Bangladesh Demographic and Health Survey is based on a cross-sectional study design. Although the data collection and study design were of high quality, the data did not allow us to draw causal relationships between variables in the current study. The data lacked information on maternal energy intake, physical activity level, and micronutrient intake, which are important for a proper assessment of nutritional status. Only one in every three households was selected for haemoglobin concentration assessment, which may not give a clear idea about the anaemia status of the whole population. It was not possible to examine the relationship between child feeding practise and infection and nutritional status due to a large amount of missing information on complementary feeding, immunisation, and infectious disease. Incomplete information and inconsistent information on some selected variables complicated the analysis process considerably.

This research was supported through the Commonwealth Scholarship Commission (CSC), UK.

I acknowledge the support I have received for my research through the provision of The National Institute of Population Research and Training NIPORT, Bangladesh and MEASURE DHS for allowing us to use BDHSs 2011 data for our analysis. The funder had no role in the design, analysis or writing of this article. 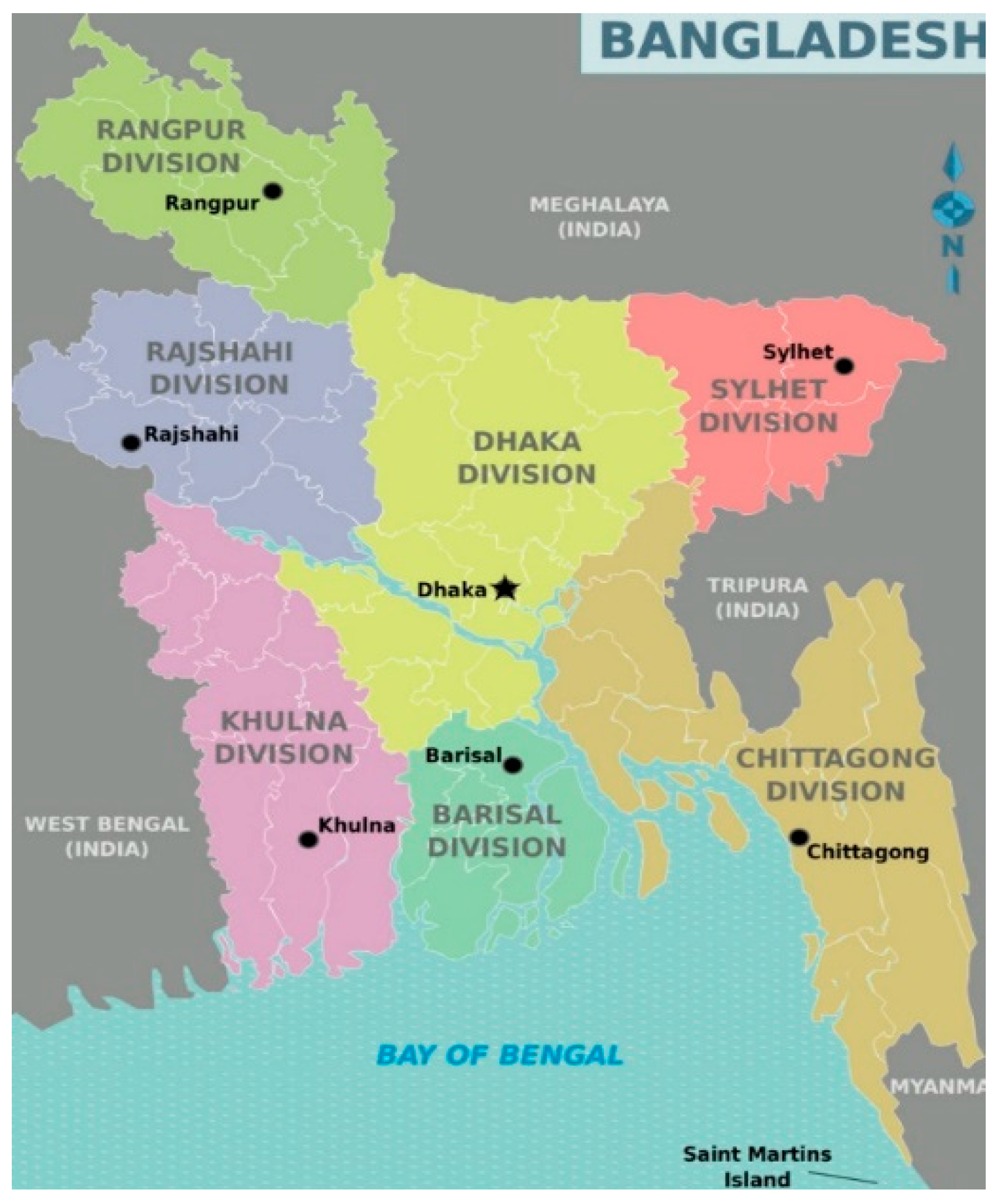 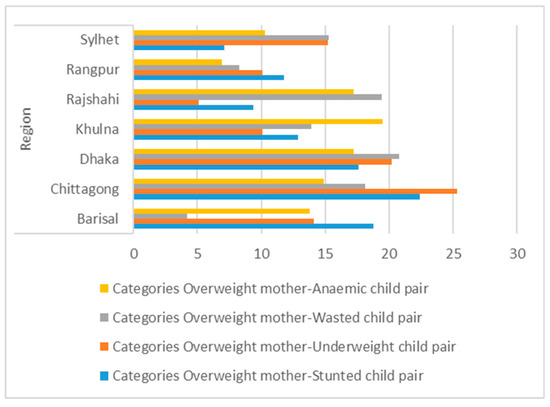