Sleep and Delirium in Pediatric Critical Illness: What Is the Relationship?

Background: Sepsis diagnosis can be incorrectly associated with the presence of hypotension during an infection, so the detection and management of non-hypotensive sepsis can be delayed. We aimed to evaluate how the presence or absence of hypotension, on admission at the emergency department, affects the initial management and outcomes of patients with community-onset severe sepsis. Methods: Demographic, clinical, laboratory, process of care, and outcome variables were recorded for all patients, at the emergency department of our university hospital, who presented with community-onset severe sepsis, between 1 March and 31 August in three consecutive years. Patient management consisted of standardized bundled care with five measures: Detection, blood cultures and empirical antibiotics, oxygen supplementation and fluid resuscitation (if needed), clinical monitoring, and noradrenalin administration (if needed). We compared all variables between patients who had hypotension (mean arterial pressure <65 mmHg), on admission to the emergency department, and those who did not. Results: We identified 153 episodes (84 (54.5%) men; mean age 73.6 ± 1.2; mean Sequential Organ Failure Assessment (SOFA) score 4.9 ± 2.7, and 41.2% hospital mortality). Hypotension was present on admission to the emergency department in 57 patients (37.2%). Hemodynamic treatment was applied earlier in patients who presented hypotension initially. Antibiotics were administered 48 min later in non-hypotensive sepsis (p = 0.08). A higher proportion of patients without initial hypotension required admission to the intensive care unit (ICU) (43.1% for patients initially hypotensive vs. 56.9% in those initially non-hypotensive, p < 0.05). Initial hypotension was not associated with mortality. A delay in door-to-antibiotic administration time was associated with mortality [OR 1.150, 95%CI: 1.043–1.268). Conclusions: Initial management of patients with community-onset severe sepsis differed according to their clinical presentation. Initial hypotension was associated with early hemodynamic management and less ICU requirement. A non-significant delay was observed in the administration of antibiotics to initially non-hypotensive patients. The time of door-to-antibiotic administration was related to mortality. View Full-Text
Keywords: sepsis; septic shock; antibiotic; mortality sepsis; septic shock; antibiotic; mortality
►▼ Show Figures 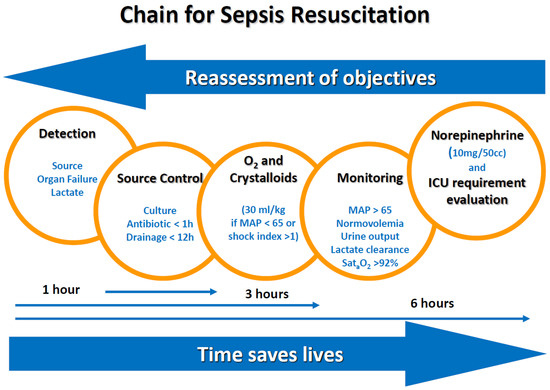