Sentinel-1 for Monitoring Land Subsidence of Coastal Cities in Africa Using PSInSAR: A Methodology Based on the Integration of SNAP and StaMPS
Previous Article in Journal

Examination of Sediment Dynamics Based on the Distribution of Silica Fluxes and Flood Sediments in the Otoishi River Related to the Northern Kyushu Heavy Rain Disaster, July 2017
Previous Article in Special Issue

Coastal management often relies on large-scale flood mapping to produce sea level rise assessments where the storm-related surge is considered as the most important hazard. Nearshore dynamics and overland flow are also key parameters in coastal flood mapping, but increase the model complexity. Avoiding flood propagation processes using a static flood mapping is less computer-intensive, but generally leads to overestimation of the flood zone, especially in defended urban backshore. For low-lying communities, sea level rise poses a certain threat, but its consequences are not only due to a static water level. In this paper, the numerical process-based model XBeach is used in 2D hydrodynamic mode (surfbeat) to reproduce an observed historical flood in Maria (eastern Canada). The main goal is to assess the impacts of a future storm of the same magnitude in the horizon 2100 according to an increase in sea level rise. The model is first validated from in situ observations of waves and water levels observed on the lower foreshore. Based on field observations of a flood extent in 2010, the simulated flooded area was also validated given a good fit (59%) with the actual observed flood. Results indicate that the 2010 storm-induced surge generated overwash processes on multiple areas and net landward sediment transport and accumulation (washover lobes). The flood was caused by relatively small nearshore waves (Hs < 1 m), but despite small water depth (>1.2 m), high flow velocities occurred in the main street (U > 2 m/s) prior to draining in the salt marsh. The impact of sea level rise on the low-lying coastal community of Maria could induce a larger flood area in 2100, deeper floodwater, and higher flow velocities, resulting in higher hazard for the population. View Full-Text
Keywords: coastal flood; XBeach; sea level rise; flood mapping; coastal storm; Eastern Canada coastal flood; XBeach; sea level rise; flood mapping; coastal storm; Eastern Canada
►▼ Show Figures 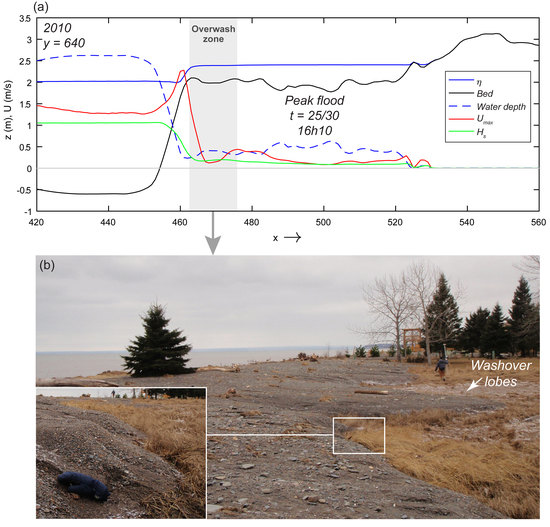