Apprehensive Drought Characteristics over Iraq: Results of a Multidecadal Spatiotemporal Assessment
Next Article in Special Issue

The PARSIFAL (Probabilistic Approach to pRovide Scenarios of earthquake-Induced slope FAiLures) approach was applied in the basin of Alcoy (Alicante, South Spain), to provide a comprehensive scenario of earthquake-induced landslides. The basin of Alcoy is well known for several historical landslides, mainly represented by earth-slides, that involve urban settlement as well as infrastructures (i.e., roads, bridges). The PARSIFAL overcomes several limits existing in other approaches, allowing the concomitant analyses of: (i) first-time landslides (due to both rock-slope failures and shallow earth-slides) and reactivations of existing landslides; (ii) slope stability analyses of different failure mechanisms; (iii) comprehensive mapping of earthquake-induced landslide scenarios in terms of exceedance probability of critical threshold values of co-seismic displacements. Geotechnical data were used to constrain the slope stability analysis, while specific field surveys were carried out to measure jointing and strength conditions of rock masses and to inventory already existing landslides. GIS-based susceptibility analyses were performed to assess the proneness to shallow earth-slides as well as to verify kinematic compatibility to planar or wedge rock-slides and to topples. The experienced application of PARSIFAL to the Alcoy basin: (i) confirms the suitability of the approach at a municipality scale, (ii) outputs the main role of saturation in conditioning slope instabilities in this case study, (iii) demonstrates the reliability of the obtained results respect to the historical data. View Full-Text
Keywords: earthquake-induced landslide; landslide hazard; analysis of scenario; Spain earthquake-induced landslide; landslide hazard; analysis of scenario; Spain
►▼ Show Figures 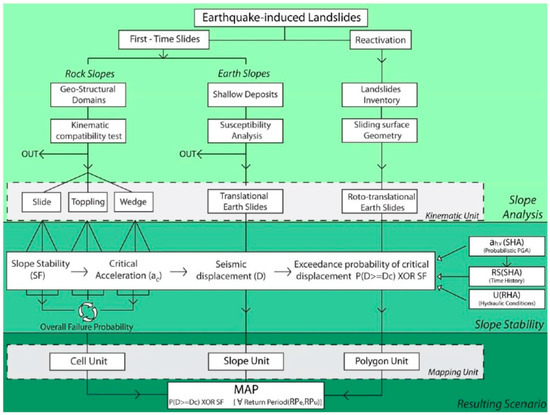