Molecular Effects of Inorganic and Methyl Mercury in Aquatic Primary Producers: Comparing Impact to A Macrophyte and A Green Microalga in Controlled Conditions
Next Article in Special Issue

A Calorimetric and Thermodynamic Investigation of the Synthetic Analogue of Mandarinoite, Fe2(SeO3)3·5H2O
Previous Article in Special Issue

Is the Kornati National Park Still an Acceptable Reference Area for Environmental Studies?

El Dabaa city is located along the northwestern coast ridge zone of Egypt, where the groundwater is the major water source for drinking, domestic, and agricultural purposes. The groundwater salinity increased over the last decades, therefore, geochemical techniques and environmental isotopes have been utilized to identify the main groundwater recharge and salinization sources. The study area comprises two main groundwater aquifers: the porous oolitic Pleistocene and the fractured limestone Miocene aquifers. The groundwater salinity of the Pleistocene aquifer ranges from 751 to 27,870 mg/L, with an average value of 6006 mg/L. The salinity of the Miocene aquifer ranges from 3645 to 41,357 mg/L, with an average value of 11,897 mg/L. Fresh and brackish groundwater have been recorded in the shallow hand-dug wells, while saline groundwater has been found in deeper wells close to the shoreline. Groundwater samples have been categorized into two distinct groups according to the salinity ranges, hydrochemical ion ratios, and stable isotopic content. Group I is composed of groundwater with salinity less than 10,000 mg/L, and depleted stable isotopic content (−5.64 < δ18O < −2.45; −23.5 < δ2H < −0.02), while Group II contains groundwater with salinity values above 10,000 mg/L and relatively enriched stable isotopic content (−1.86 < δ18O < −0.48; −10.3 < δ2H < −2.0). The weight mass balance mixing model shows that Group I falls close to the rain and/or water extract samples, indicating meteoric water origin that has evolved due to leaching and dissolution processes. Group II is mostly located between the rainwater and the seawater samples, revealing mixing with water of marine origin due to groundwater overexploitation. The estimated seawater mixing index (SMI) of groundwater samples of Group II is greater than one, which confirms mixing with seawater. The water-rock reaction NETPATH (geochemical groundwater reaction and mixing code) model scenarios representing Group I suggests that gypsum, dolomite, and halite are dissolved, while calcite is formed with a slight influence from evaporation processes. Six mixing models representing Group II are used to investigate seawater mixing scenarios. The models suggest that illite and dolomite are dissolved, while calcite and gypsum are precipitated with a seawater mixing ratios ranging from 28% to 98%. In conclusion, due to the scarcity of annual groundwater recharge in the El Dabaa area, groundwater withdrawal should be well managed to avoid groundwater salinization and further seawater intrusion. View Full-Text
Keywords: geochemistry; groundwater; seawater intrusion; stable isotopes; El Dabaa area geochemistry; groundwater; seawater intrusion; stable isotopes; El Dabaa area
►▼ Show Figures 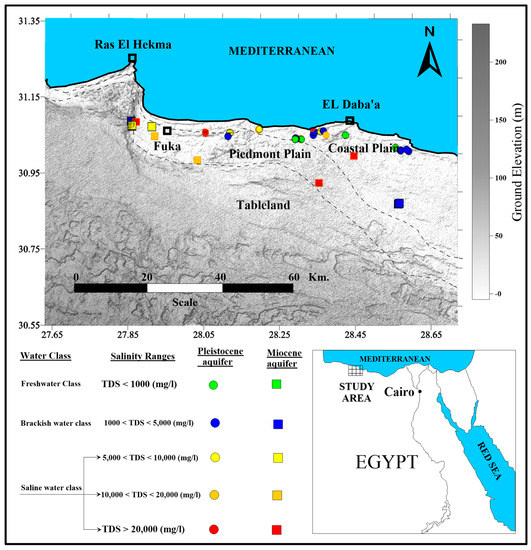