Securing the Limits of Large Ocean States in the Pacific: Defining Baselines Limits and Boundaries amidst Changing Coastlines and Sea Level Rise
Next Article in Special Issue

:
Gas-emission craters discovered in northern West Siberia may arise under a specific combination of shallow and deep-seated permafrost conditions. A formation model for such craters is suggested based on cryological and geological data from the Yamal Peninsula, where shallow permafrost encloses thick ground ice and lenses of intra- and subpermafrost saline cold water (cryopegs). Additionally, the permafrost in the area is highly saturated with gas and stores large accumulations of hydrocarbons that release gas-water fluids rising to the surface through faulted and fractured crusts. Gas emission craters in the Arctic can form in the presence of gas-filled cavities in ground ice caused by climate warming, rich sources of gas that can migrate and accumulate under pressure in the cavities, intrapermafrost gas-water fluids that circulate more rapidly in degrading permafrost, or weak permafrost caps over gas pools.
Keywords:
Arctic permafrost; explosive gas emission; crater; ice-rich clay; ground ice; intrapermafrost cavity; cryopeg; methane; Yamal Peninsula

The effects of global warming observed worldwide in recent decades are especially evident in the Arctic, including the vast territories of northern Russia. The changes in air and permafrost temperature patterns lead to progressive permafrost degradation and active layer thickening [1,2,3,4,5]. The degrading permafrost loses its bearing capacity as a foundation for buildings and facilities, which creates risks to the Arctic infrastructure [6,7,8,9,10,11,12,13]. Furthermore, permafrost affected by warming can promote the emission of the main greenhouse gases (methane and carbon dioxide). Greenhouse gases can be released in multiple ways, as summarized and mapped in a number of recent publications [13,14]: from emission from the surfaces of the active layer and lakes to gas flow during drilling to different depths in permafrost.
Gas emission from shallow Arctic permafrost can be explosive and produce deep craters reaching tens of meters in diameter and depth (Figure 1). The first large crater to be discovered, ~40 m in diameter and 50 m deep, was located in the Yamal Peninsula (northern West Siberia) in the summer of 2014 (Figure 2, C1). It was spotted by accident from helicopter, 30 km south of the Bovanenkovo gas-condensate field, which had commenced operations shortly before (in 2012). That discovery was followed by many others, amounting to around 20 to date, which have been documented in more or less detail [14,15,16,17,18,19,20,21,22,23,24,25,26] (Figure 2).
It is unlikely that the progressively more numerous cases of explosive gas emission from shallow permafrost, with formation of huge craters, would be due uniquely to the recent active development of the northern territories, without the impact of a warming climate and permafrost degradation. The available monitoring data reveal a large potential of degassing hazard that poses problems for human activity in the permafrost regions. Two new craters (Figure 2, C2, C9) were found quite recently: one 3 km away from the Bovanenkovo-Ukhta major pipeline in pressurized conditions, and another near the Obskaya-Bovanenkovo railway. The risks to petroleum infrastructure are aggravated by the violent gas emission that, according to eye-witness reports, is often accompanied by spontaneous ignition and explosion of gas and may lead to the formation of craters. As shown by the available data [14,23,24,25,27,28], an explosive gas emission is commonly preceded by growth of pingo-like mounds (locally called bulgunnyakhs). However, unlike the classical frost heave, their growth is instead driven by pressure buildup at local accumulations of gas confined in taliks and cavities in shallow permafrost. The pressure of gas (or gas + liquid) in a closed intrapermafrost cavity may exceed the critical value and overcome the resistance of the permafrost cap. As a result, the cap collapses by pneumatic or hydro fracture-like mechanisms and its ejected fragments fall down around the crater making up a parapet-like ridge or become dispersed over distances of 300 m or more [29] (Figure 3). This basic crater formation model has been generally accepted by most geoscientists, but some issues remain poorly understood: e.g., the origin and dimensions of large gas-filled cavities in permafrost, the composition and nature of gas, and the magnitude of the gas pressure required to break through the frozen cap, etc.
The causes and mechanisms of explosive gas emissions have been explained in different models, but none of them can account for all known cases. All events of this kind produce the same visible result—a crater—but the causes of gas accumulation in permafrost and the conditions in which the process develops may differ considerably depending on local geomorphology and permafrost properties. Therefore, it will be hard to propose a reasonable method for detection and mapping of potentially pressurized gas-saturated bodies in shallow permafrost prone to explosion and cave-in in the near future. In this respect, data from new craters [29] have important implications for hazard prediction. This study focuses on near-surface factors in permafrost, that appear to be overlooked in the available publications on gas-emission craters but may be relevant to the processes discussed [30].

2. Permafrost Properties in the Area of Gas-Emission Craters

3. Possible Shallow Factors in the Formation of Gas Emission Craters

The huge gas emission craters recently discovered in the Arctic tundra of northern West Siberia are due not only to the active economic development of the area but also to global change, especially warming which leads to thawing of shallow permafrost and creates additional geocryological hazards. The craters form under a certain combination of cryological and geological conditions, in gas-saturated permafrost that encloses thick massive ground ice and cryopegs (intra- and subpermafrost lenses of saline cold water), in the presence of large gas fields and related ascending gas-water fluids. Such conditions exist currently in some areas of northern West Siberia (Yamal and Gydan peninsulas), but this combination of factors does not always occur elsewhere in the Arctic. Therefore, explosive gas release is not a ubiquitous phenomenon in the permafrost of Eurasia and North America. Such events also may have occurred in previous periods of climate warming in the geological past of northern West Siberia (e.g., Holocene), while the ancient craters apparently transformed into the round lakes frequently found in the Yamal Peninsula.
The study of permafrost and local geology in the area of recent crater C17 demonstrates that climate-driven processes in shallow permafrost affect the gas emission patterns and act jointly with the deep factors associated with permafrost history. The suggested conceptual formation models of gas emission craters provide clues to the causes and conditions responsible for the origin of gas-filled cavities in permafrost, to the role of massive ice and intrapermafrost cryopegs in the process, as well as to the potential of gas accumulation, including migration of deep gas and the dissociation of self-preserved metastable gas hydrates. The model also accounts for the role of warming in the deformation of permafrost and ground ice as a prerequisite for the failure of permafrost caps above gas pools and the formation of craters.
The gas emission craters in the Arctic permafrost originate in the presence of:

-
gas-filled cavities in ground ice caused by climate warming;
-
rich sources of gas that can migrate and accumulate under pressure in the cavities;
-
intrapermafrost gas-water fluids that circulate more rapidly in degrading permafrost;
-
weak permafrost caps over gas pools.

At the time being, no all-encompassing hypothesis has been proposed that explains all known cases of explosive gas emission in the Arctic permafrost. However, timely purposeful studies of new craters using test drilling down to the permafrost bottom may provide further insights into their formation mechanisms as a basis for prediction and mitigation of the hazard in the developed Arctic regions.

The authors are grateful to the Government of the Yamal-Nenets Autonomous District and the Russian Center of the Arctic Development for their assistance in conducting field studies, and the energy company Total Energies for supporting research on gas craters in the Russian Arctic. Personal acknowledgments to Professor Vasily Bogoyavlensky for organizing the field trip to the Yamal Peninsula in 2020. 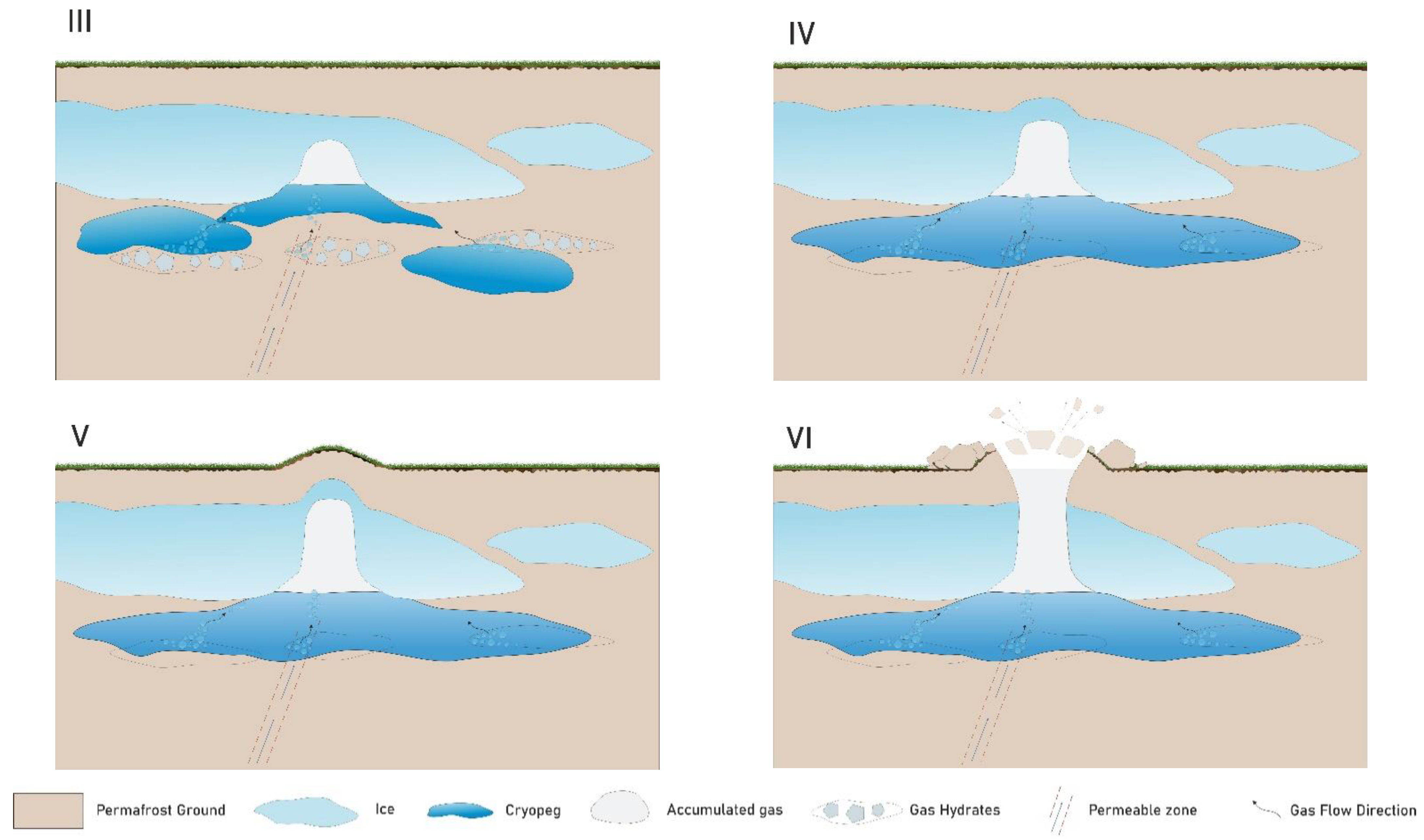