A Network Perspective of the Ecosystem’s Health Provision Spectrum in the Tourist Trails of UNESCO Global Geoparks: Santo Sepulcro and Riacho do Meio Trails, Araripe UGG (NE of Brazil)
Next Article in Special Issue

A Predictive Model for Maceral Discrimination by Means of Raman Spectra on Dispersed Organic Matter: A Case Study from the Carpathian Fold-and-Thrust Belt (Ukraine)
Previous Article in Journal

This work quantifies the amount of erosion associated with the Cretaceous and Miocene erosional unconformities recognised in the distal part of the Northern Alpine Foreland Basin (NAFB), north-eastern Switzerland. To achieve this goal, the basin thermal modelling approach is applied, calibrated by two different sets of data collected in previous studies: vitrinite reflectance (%Ro) and the temperature estimated from apatite fission tracks (AFT) data modelling. The novelty of this approach is the possibility to constrain the timing and magnitude of multiple erosion events by integrating thermal modelling with thermochronologic data. Combining these two methods allows the erosional events to be separated which would not be possible using only irreversible paleothermometers, such as vitrinite reflectance data. Two scenarios were tested, based on the data of two published thermochronology studies. For the Cretaceous unconformity, similar results are obtained for the two scenarios, both indicating that the deposition and the subsequent complete erosion of Lower Cretaceous deposits, in the order of 500–1300 m, depending on the area, are necessary, in order to attain the temperatures estimated by the thermal history modelling of AFT data. Thus, a depositional hiatus for this period is not likely. For the Miocene-Quaternary unconformity, the magnitude of erosion calculated for the two scenarios differs by 300–1400 m, depending on the AFT data considered. The two scenarios lead to a different evaluation of the subsidence and uplift rate of the study area, thus to a different interpretation of the tectono-stratigraphic evolution of this distal sector of the NAFB. View Full-Text
Keywords: erosion; basin thermal modelling; apatite fission track data; Northern Alpine Foreland Basin erosion; basin thermal modelling; apatite fission track data; Northern Alpine Foreland Basin
►▼ Show Figures 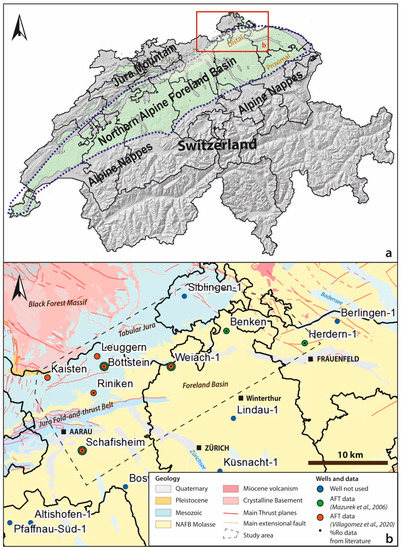