A Probabilistic Assessment of Soil Erosion Susceptibility in a Head Catchment of the Jemma Basin, Ethiopian Highlands
Previous Article in Journal

The geology of the epicentral area of the 1980 earthquake (Irpinia-Lucania, Italy) is described with new stratigraphic, petrographic and structural data. Subsurface geological data have been collected during the studies for the excavation works of the Pavoncelli bis hydraulic tunnel, developing between Caposele and Conza della Campania in an area that was highly damaged during 1980 earthquake. Our approach includes geological, stratigraphic, structural studies, and petrological analyses of rock samples collected along the tunnel profile and in outcropping sections. Stratigraphic studies and detailed geological and structural mapping were carried out in about 200 km2 wide area. The main units cropping out have been studied and correlated in order to document the effects of tectonic changes during the orogenic evolution on the foreland basin systems and the sandstone detrital modes in this sector of the southern Apennines. The multi-disciplinary and updated datasets have allowed getting new insights on the tectono-stratigraphic evolution and stratigraphic architecture of the southern Apennines foreland basin system and on the structural and stratigraphic relations of Apennines tectonic units and timing of their kinematic evolution. They also allowed to better understand the relationships between internal and external basin units within the Apennine thrust belt and its tectonic evolution. View Full-Text
Keywords: geological map; tunnel geology; sandstone petrology; foreland basin evolution; 1980 Irpinia-Basilicata earthquake; southern Apennines; Italy geological map; tunnel geology; sandstone petrology; foreland basin evolution; 1980 Irpinia-Basilicata earthquake; southern Apennines; Italy
►▼ Show Figures 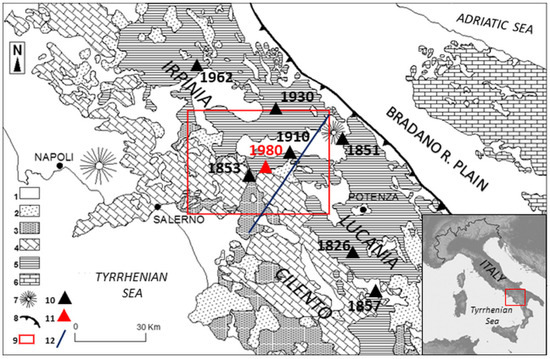