Ground-Penetrating Radar Survey for the Study of the Church of Saint Cosma in Helerito (Tagliacozzo, L’Aquila, Italy)
Previous Article in Journal

The archaeological area of Saepinum is considered the symbol of the history of Roman civilization in Molise region (Italy). It was a Samnite commercial forum and service center, then it became a Roman municipium, and, later, it was transformed into a medieval and modern rural village. Although the archaeological excavations brought to light different important public buildings, such as the theater, the forum, the basilica, different temples, and the main streets, today, there is still much to discover and study inside the well-preserved city walls. For this purpose, a ground penetrating radar (GPR) survey was realized in the space between the theater and the decumanus, allowing imaging of a complex regular pattern of archaeological features belonging to thermal buildings still buried in the soil. View Full-Text
Keywords: GPR; archaeological prospections; Saepinum; thermae GPR; archaeological prospections; Saepinum; thermae
►▼ Show Figures 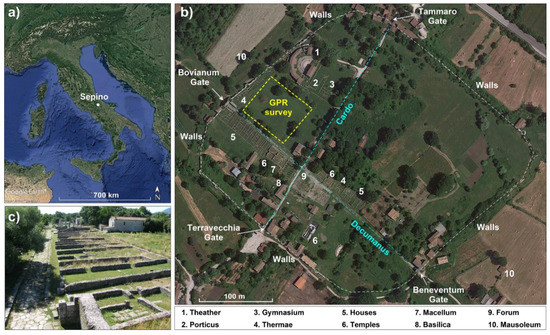