Petrographic and geochemical data for mylonites from a metric-scale shear zone in mantle peridotites from the Finero massif (Southern Alps) record large mineralogical and geochemical modifications compared to surrounding coarse-grained ultramafic rocks, which were pervasively deformed in presence of hydrous melts. The mylonites are composed by olivine and orthopyroxene and, less frequently, clinopyroxene, phlogopite, and pargasite porphyroclasts enclosed in a fine-grained matrix of phlogopite and olivine, with subordinate amounts of orthopyroxene, clinopyroxene, pargasite, and chromite. P-T estimates indicate that deformation occurred under granulite- to upper-amphibolite facies conditions. Field relationships and U-Pb dating indicate that the shear zone was active during Lower Jurassic and/or later, in an extensional setting at the western margin of the Adria plate, which led to the opening of the Alpine Tethys. The major and trace element composition of the porphyroclasts in the mylonites significantly differ from those in the hosting coarse-grained ultramafics. Porphyroclasts were chemically active during deformation acting as source (diffusion-out) or sink (diffusion-in) for some trace elements. The chemical modifications were promoted by the interaction with aqueous fluids and the composition varied from mantle- (enriched in Ni, Co, Li, Na, REE, Y, and Sr) to crustal-derived (enriched in Zn, K, Al, Ti, and Fe). View Full-Text
Keywords: mantle peridotite; shear zone; major and trace elements; mylonite; porphyroclasts; Ivrea-Verbano Zone mantle peridotite; shear zone; major and trace elements; mylonite; porphyroclasts; Ivrea-Verbano Zone
►▼ Show Figures 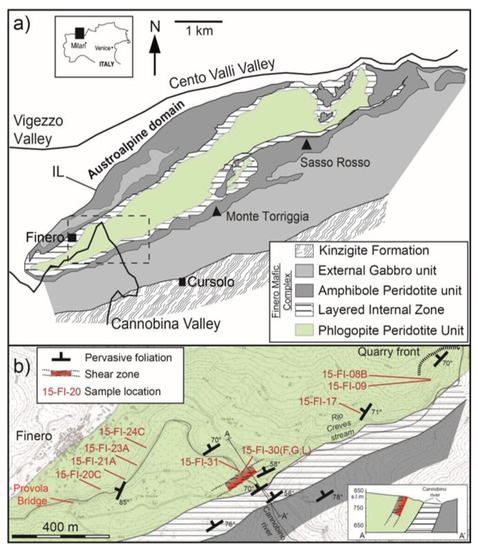