Zircon as a Mineral Indicating the Stage of Granitoid Magmatism at Northern Chukotka, Russia

This report presents new data on U-Pb geochronology, oxygen isotopes, and trace element composition of zircon from a pegmatite vein crosscutting an eclogite boudin on Stolbikha Island, Gridino area, Belomorian mobile belt (BMB). The zircon grains occur as two distinct populations. The predominant population is pegmatitic and shows dark cathodoluminescence (CL); about a third of this population contains inherited cores. The second zircon population is typical of granulite and exhibits a well-defined sectorial (mosaic) zoning in CL. Both the inherited cores and sectorial in CL zircons appear to have been captured from metabasites as xenocrysts during the pegmatite vein formation. A U-Pb age of 1890 ± 2 Ma for the main zircon population is interpreted as the age of the pegmatite injection. This value is close to the age threshold for the BMB eclogites (~1.9 Ga) and unambiguously defines the upper age limit for the eclogite metamorphism. The pegmatite formation is thus related to partial melting events that occurred during the retrograde amphibolite-facies metamorphism shortly after the eclogitization. A U-Pb date of 2743 ± 10 Ma obtained for the sectorial in CL zircons is considered as the age of the granulite-facies metamorphism established previously within the BMB. The values of δ18O in the zircon populations overlap in a broad range, i.e., δ18O in the pegmatitic zircons varies from 6.1‰ to 8.3‰, inherited cores show a generally higher δ18O of 6.7–8.8‰, and in the captured granulitic zircons δ18O is 6.2–7.9‰. As a result of fluid attack during the final stage of the pegmatite vein formation, the composition of the pegmatitic zircons in terms of non-formula elements (REE, Y, Ca, Sr, Ti) has become anomalous, with the content of these elements having been increased by more than tenfold in the alteration zones. Our data provide new constraints on the timing of eclogite metamorphism within the BMB and show that the late-stage pegmatite-related fluids exerted a very pronounced influence on trace element abundances in zircon, yet had no significant impact on the isotopic composition of oxygen. View Full-Text
Keywords: zircon; trace elements; rare earth elements; U-Pb zircon geochronology; eclogites; pegmatites; Gridino; Belomorian mobile belt zircon; trace elements; rare earth elements; U-Pb zircon geochronology; eclogites; pegmatites; Gridino; Belomorian mobile belt
►▼ Show Figures 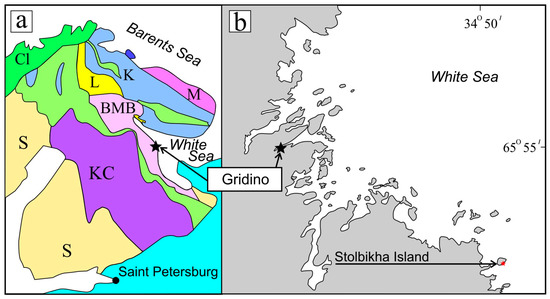