This paper presents the results of measurements performed on α-quartz subjected to shear stress in dry conditions, to understand the relationship between the shear intensity and the resulting physical and chemical effects. If a shear stress of intensity higher than 100 MPa is applied continuously to alpha quartz crystals, they will tend to lose their crystallinity, progressively reduce their friction coefficient (Cof) and change into a low-order material, apparently amorphous under X-ray diffraction, but with a structure different from silica glass. Raman and Pair Distribution Function analyses suggested a structure like cristobalite, a silica polymorph well-known for its auxetic behavior, i.e., having a negative Poisson ratio. This elastic parameter pre-eminently controls the friction coefficient of the material and, if it is negative, the Cof lowering. As a result, the increase in low crystallinity cristobalite is sufficientto explain the lowering of the quartz friction coefficient up to values able to contribute, in principle, to the triggering processes of active faults. This allows hypothesizing a slip induction mechanism that does not include the need to have the interposition of layers of hydrated silica, as invoked by many authors, to justify the low friction coefficients that are achieved in shear stress tests on rocks abundant in quartz. View Full-Text
Keywords: phase transitions; defects; fracture and flow; rheology of faults; quartz; friction phase transitions; defects; fracture and flow; rheology of faults; quartz; friction
►▼ Show Figures 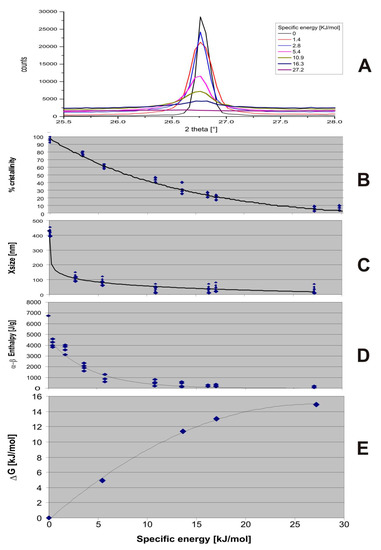