Impact of Tectonic, Glacial and Contour Current Processes on the Late Cenozoic Sedimentary Development of the Southeast Greenland Margin

The distinction between turbidites, contourites and hemipelagites in modern and ancient deep-water systems has long been a matter of controversy. This is partly because the processes themselves show a degree of overlap as part of a continuum, so that the deposit characteristics also overlap. In addition, the three facies types commonly occur within interbedded sequences of continental margin deposits. The nature of these end-member processes and their physical parameters are becoming much better known and are summarised here briefly. Good progress has also been made over the past decade in recognising differences between end-member facies in terms of their sedimentary structures, facies sequences, ichnofacies, sediment textures, composition and microfabric. These characteristics are summarised here in terms of standard facies models and the variations from these models that are typically encountered in natural systems. Nevertheless, it must be acknowledged that clear distinction is not always possible on the basis of sedimentary characteristics alone, and that uncertainties should be highlighted in any interpretation. A three-scale approach to distinction for all deep-water facies types should be attempted wherever possible, including large-scale (oceanographic and tectonic setting), regional-scale (architecture and association) and small-scale (sediment facies) observations. View Full-Text
Keywords: turbidites; contourites; hemipelagites; deep-water systems; facies; continental margin deposits; ichnofacies; sediment textures; microfabric turbidites; contourites; hemipelagites; deep-water systems; facies; continental margin deposits; ichnofacies; sediment textures; microfabric
►▼ Show Figures 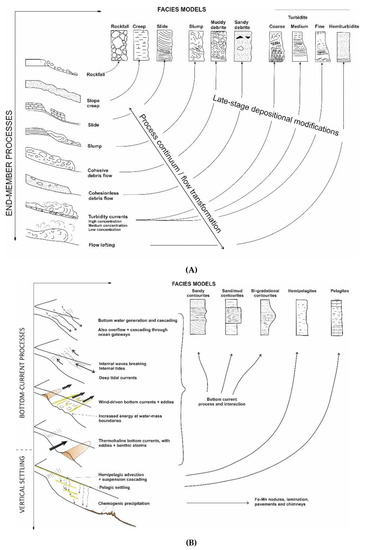