The shaft hoist assembly, which consists of the hoisting machine, the headgear, and the shaft, is the core of underground mine manufacturing. Exceeding the value of tower inclination, rope friction angles, or excessive inclination of the pulley shafts and hoisting machine may lead to critical failures [1]. The measuring service periodically or continuously monitors the condition of the hoist assembly geometry, indicating the rectification process. Many studies related to different aspects of mine hoist and friction safety [2,3,4,5,6,7,8] have been conducted at mines In this article, the authors focused on a comprehensive geodetic inventory with the determination of the measuring methodology of the hoisting device with a propeller (the Koeppe system) and two levels of rope pulleys associated with it (upper and lower) [9]. The process of conducting geodetic control measurements on the example of two hoisting assemblies with the Koeppe system is presented.
The geodetic control methods used so far have been usually based on various plumbing methods. Few automation trials have allowed for the determination of one or two elements of the geometric control of the shaft hoist assembly. However, to make a full inventory of the mining shaft, several complementary classical measurement techniques have to be carried out. As a consequence, such an approach significantly extended the performance of the surveys. Currently, the set of classical geodetic methods can be replaced with laser scanning, which allows obtaining as much necessary information as possible in the shortest possible time [1,10]. This approach is visible in every branch of industry where it is necessary to obtain as much precise data as possible in the shortest possible time. Laser scanning could be used in testing the clearance gauge of railway [11], maritime measurements [12], monitoring of roads and bridges [13] or building [14] state, concrete structures [15], and in many other industries. Naturally, this technology has also been developing in the mining industry for over 20 years [16,17]. The scope of the data obtained with this method is incomparably greater than that obtained with traditional methods. Furthermore, the use of scanning may be important from an economic point of view as well as for the safety of employees [18]. The inventory measurements of the hoisting machine and rope wheels, along with the determination of the tower and shaft inclination, can be performed by a four-person measuring team even during one shift. To have a comprehensive inventory, only the precise leveling of the shaft’s cable pulleys and winding machine, together with establishing the geodetic network to link the model to the local or global system, is required to be performed with the help of classical methods.

In December 2019, several hoisting assemblies were inventoried by the surveying team consisting of AMC company (Leawood, KS, USA) and AGH University of Science and Technology representatives with extensive experience in this type of research (e.g., [1]). Two of the measured objects had problems associated with the usage of Koeppe friction. The measurements were performed using a panoramic laser scan with the phase scanner FARO FOCUS 3D. The device allows information to be obtained about the measured object with a resolution of 5 mm/10 m distance with an accuracy not worse than ±2 mm for a single measuring station. Additionally, elements particularly important for the performed analysis (inclination of hoisting machine and rope wheels shafts) have been determined by the precision leveling technique (with the usage of Trimble DiNi 0.3 and the set of invar rods that ensures leveling accuracy below 0.3 mm/1 km). The internal consistency of the point cloud (Figure 1) was ensured by the high accuracy measurements of the geodetic network with a total station (Trimble C3 with an accuracy of 2′′ angle and length of 2 mm + 2 ppm.).
Another important issue was the problem of uneven lining wear and a high probability of excessive tower vibrations. Therefore, the dynamic tests of headframe inclination during its operation and emergency breaking was performed. Simultaneously, the rope movement amplitude was also tested. The test of the headframe inclination was carried out with the use of two measurement technologies: laser scanning and GNSS measurement in real-time kinematic mode with a receiver located on the shaft tower (Figure 2) with the base station recording data in the static mode [19].
The results of the laser scanning measurements (point clouds) allowed us to develop spatial models of inventoried objects [20] (Figure 3). In addition, subsequent computer-based analyses were performed such as determining the characteristic points located on the axles of hoisting machines and cable pulleys, establishing transverse profiles on shaft towers, and the amplitude of vibration of the winding rope. The obtained base of points was used to prepare the spatial arrangement of the axes of the Koeppe drums, pulleys, shaft tower structure, and ropes.
All the obtained data were finally used to determine the friction angles of the ropes on the winding wheels, the inclination of the pulley shafts and the winding wheels, determine the verticality of the shaft tower (including during its operation period and emergency breaking), and determine the verticality of ropes (descending from the level of cable pulleys to the shaft room). All together, these data allowed us to determine whether the inventoried objects could still be safely used according to the law. Moreover, they constitute a database necessary to perform the rectification of individual elements of the hoist assembly and form an excellent source needed to complete the engineering documentation of the mine.

3. Applicable Law Regulations in Relation to the Inventoried Objects

In the first analyzed case (France), the upper rope wheels required rectification, but the entire object was inventoried. Thanks to the geodetic points network situated at the shaft room and its surroundings, it was possible to determine the coordinates of black and white scanning targets. These targets were situated at each level of the pulleys, shaft station, and the building with the winder drum and were used to register the point cloud and georeferencing. In addition, the coordinates of characteristic points at the tower shaft construction were determined with reflectorless measurement for better control of the results. Obtained point clouds were post processed. Azimuths of the planes and grooves of the pulleys and the propeller shaft, and also rope and shafts axes were obtained using the spatial model located in the local coordinate system. The azimuth values allowed the determination of rope friction angles on the pulleys and the winding pulley. A digital 3D model of the object was made, which enables a determination of the axis shifts of the grooves. The lower wheels converged with the drive wheel disc at 13 mm, and the upper wheels turned out to be twisted relative to the propeller. Ropes coming out of the winding pulley grooves perfectly hit the upper rope wheels, but when twisted, they showed non-parallelism. The extension of the axis of the grooves of the upper pulleys for the winding pulley showed an error of 92 and 128 mm. Therefore, for rectification, it is required to slightly twist and move the arrangement of the upper pulleys while maintaining the position of the current points of departure of the rope on the winding machine. Changes in the points of descent of the rope to the shaft indicates that its deflection from the vertical will improve.
The second case analyzed (in Silesia) comes down to the verification of the condition that the draw axis should be symmetrically placed in the middle between the rope wheel planes properly twisted to the machine. After analyzing previous surveys and discussions with the mine’s power engineering department and surveying-geological department, it turned out that in the context of the displacement of the grooves relative to each other, the deflection of the tower does not play a role because it shows a vector directed toward the winding machine. The research showed that the deflection of the object was within the scope of the permit (1/500 tower height in accordance with the relevant Regulation [21]). The measured displacement of the groove axis on the drive wheel related to the draw axis at the wheel level was 166 mm, whereas the displacement of the groove axis on the drive wheel in relation to the pull axis at the level of the propeller wheel was 425 mm for the underlap rope’s wheel and 47 mm for the overlap rope’s wheel (Figure 10). The geometry of the object also indicates that the inclination values of ropes going down to the shaft may be problematic in the future. Therefore, the values indicate that the shaft tower should be rectified first. Only after that, should the whole hoist assembly be re-measured and the pulley assembly rectified adequate to the results of the inventory.

The Polish law [21] imposes appropriate deadlines for inventorying the geometry of the hoist assembly. Every five years, the inclination of the shaft tower, geometrical relationships between the pulleys, and the winding machine as well as the straightness of the guides and the shaft geometry should be determined. In the opinion of the team of authors, such a study should be combined in the scope of checking the inclination of the shaft tower together with the shaft and winding machine due to the possibility of conducting a wider, holistic analysis. In addition, it is worth mentioning that many mines are deciding to measure the tower inclination more often, even every year.
Thanks to the technological progress in the field of hardware and software, the appropriate selection of measurement methods allows faster and more accurate inventories. The presented examples propose a modern approach to the documentation of the mine object process. Moreover, the collected data can be later used for renovation, extension, or decommissioning design work. The context of a hoist assembly with friction Koeppe winder is particularly demanding. A several centimeters axes offset can affect the geometry and fluidity of the entire construction. As mentioned in this article, the costs of the improper operation of such a system can be very high, and the usage tedious. It is therefore particularly important to systematically control geometrical relationships and conduct possible rectification.
The limitations resulting from the accuracy of the measurement with a laser scanner and combining subsequent scans indicate the need to use methods such as precision leveling and tacheometric measurement of the matrix and connection points. As shown in the article, the errors from the combination of the above methods are several orders lower than the limit values for the use of objects. 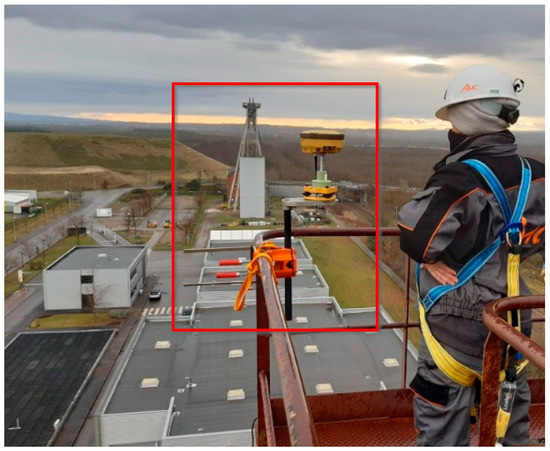 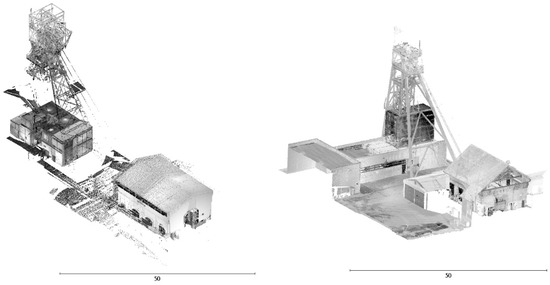 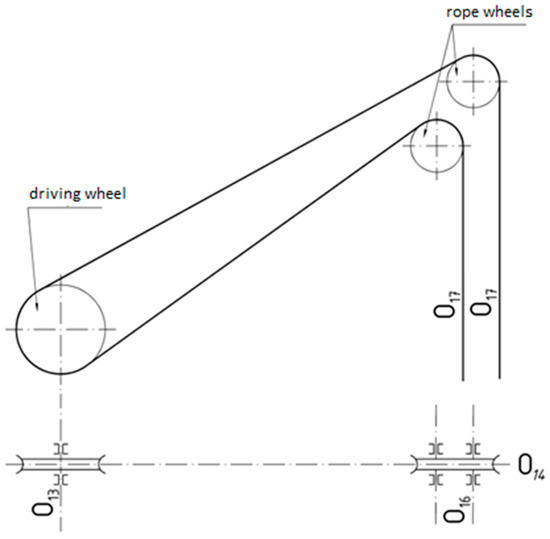 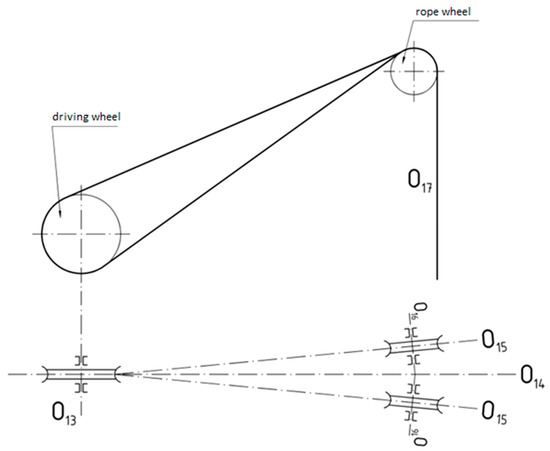 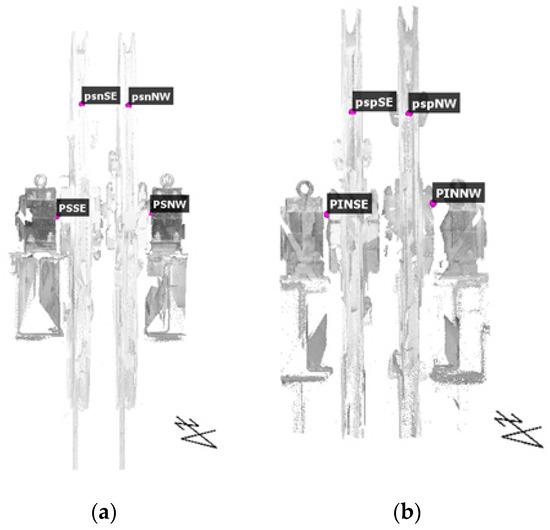 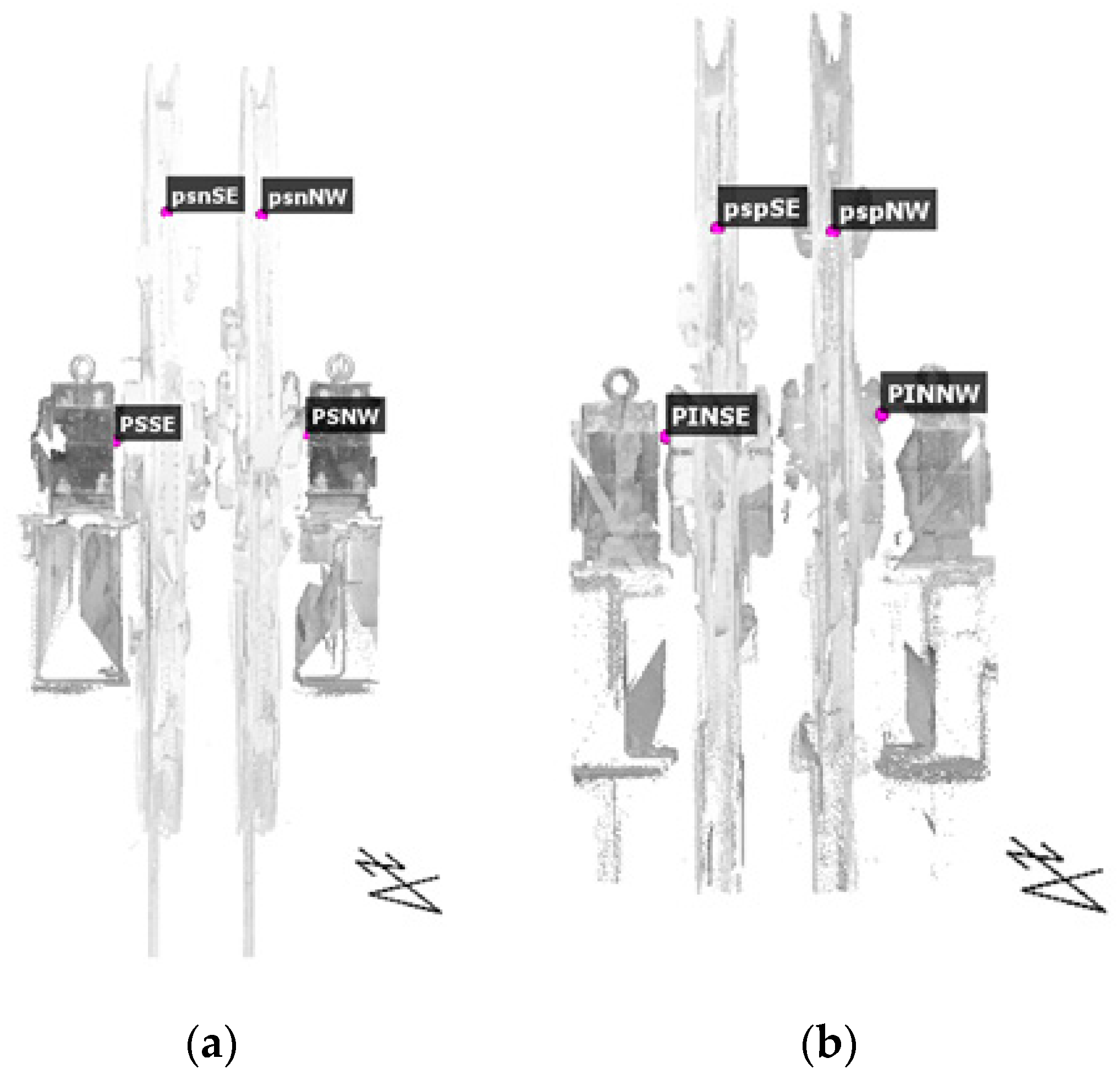 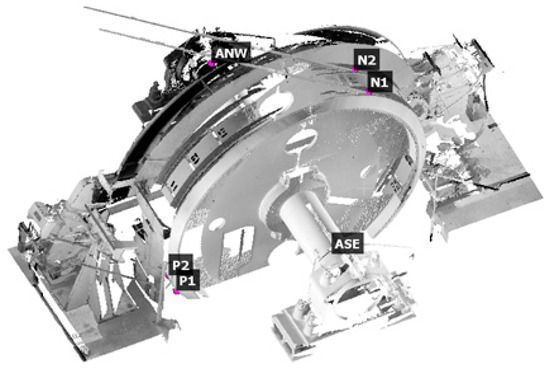 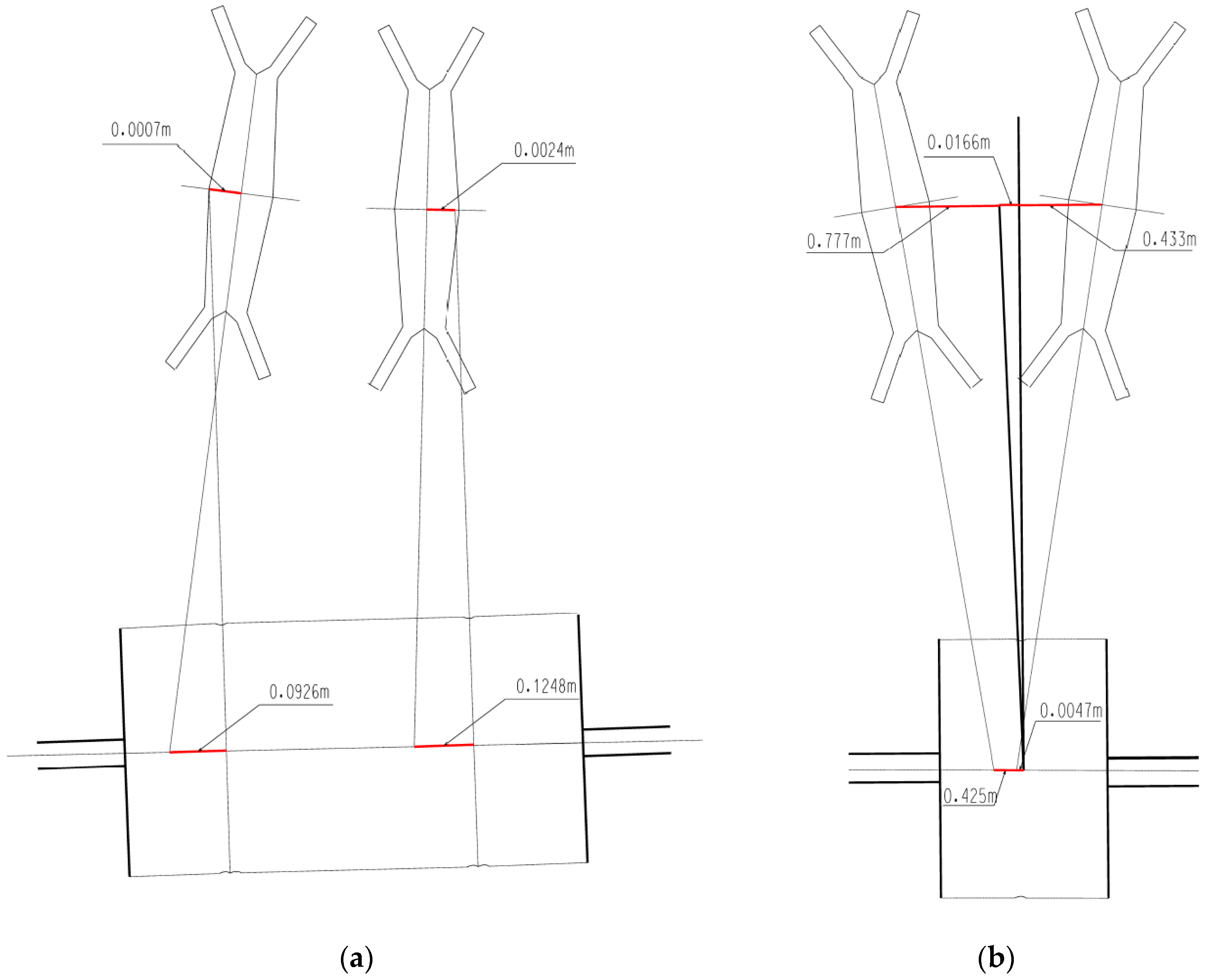