Improving the Welfare of Companion Dogs—Is Owner Education the Solution?
Next Article in Special Issue

Thyroid and Lipid Status in Guide Dogs During Training: Effects of Dietary Protein and Fat Content

Animal motion is characterised by predictable kinematics according to their body morphology and the laws of gravity. This pattern of movement, called biological motion, is traditionally studied using animated displays created by placing a small number of light dots on the major joints of living beings. Previous studies have shown that several animal species can reliably discriminate dot displays depicting an animal walking, and their performance is impeded when the display is turned upside-down and is variably affected when each dot is displaced to disrupt the global biological arrangement. In this study, we investigated this phenomenon in dogs during the presentation of dot displays depicting humans or dogs walking. Our findings showed that dogs preferred to view the display which depicted an upright dog, regardless of its global arrangement, and had no significant preferences when displays depicting humans were presented. This suggests that dogs’ sensitivity to biological motion depends mainly on the presence of dot motion that moves in accordance with gravity. Also, our findings suggest that, despite dogs’ extensive exposure to human motion, they are not sensitive to the bipedal motion presented in the human dot displays. 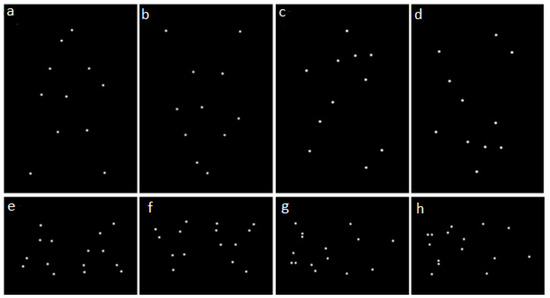