The Meat Paradox, Omnivore’s Akrasia, and Animal Ethics
Next Article in Special Issue

People commonly fail to recognise the behavioural signs that horses display when they experience pain and fear. Consequently, the distress remains unresolved, reducing the horse’s welfare and having potential safety implications for the handler. In order to investigate the public’s ability to recognise such signs of equine distress, members of equestrian Facebook groups were asked to view and comment on six videos; these videos were selected by the authors on account of their portrayal of horses behaving in a manner suggestive of negative affect. For comparison, responses were also obtained from six equine behaviourists, who identified behaviours suggestive of varying degrees of distress. While respondents successfully recognised behaviour consistent with negative affect in some instances, videos featuring natural horsemanship and bridle-less riding were often wrongly interpreted to be positive experiences for the horses. Despite recognising behaviours indicative of distress in some videos, a minority of respondents nevertheless said they would have been happy for their own horse to be treated similarly. Participant age and experience had little effect on the results; however, responses by people who had selected “clicker training” as their preferred equestrian activity were more closely aligned with those of the equine behaviourists, suggesting that clicker trainers might be more accurate in their recognition of equine distress than other members of the equestrian community. This study can be used to inform the outreach activity of education and welfare organisations, through improved recognition, and subsequent reduction, of equine distress.

A key welfare problem for horses is that people commonly fail to recognise, and consequently neglect to resolve, equine behavioural signs of distress, worsening the welfare of the horse and potentially putting the safety of the handler at risk as a result. Members of equestrian Facebook groups were asked to view six videos and assess the horse’s behaviour in each; the authors selected the videos and considered each video to demonstrate behaviour associated with negative affective states. An additional six equine behaviourists also completed the survey as an “expert comparison group” from whom we could define “correct” answers; their responses were consistent with each other and the views of the authors. Although the majority of respondents successfully recognised behaviour indicative of distress in some instances, behaviour associated with negative affective states was commonly missed; videos featuring natural horsemanship and bridle-less riding were particularly interpreted incorrectly to be positive experiences for the horses. Binary logistic regression analysis (72.1% success rate) confirmed that the different video types (ridden dressage, natural horsemanship, in-hand dressage, bridle-less riding, Western reining and behavioural rehabilitation) were strong predictors for obtaining a correct answer (p < 0.01) but that experience of equine-ownership was not. Of the equestrian activities preferred by participants, only proponents of clicker training showed an increased likelihood of obtaining the correct answer (p = 0.05). Even when behavioural signs suggestive of negative affective states were recognised, a minority of respondents stated that they would be happy for their horse to be treated similarly. In conclusion, behavioural signs of equine distress are poorly recognised; they therefore warrant an increased prominence in education and the outreach activity of welfare organisations, in order to reduce equine suffering. View Full-Text
Keywords: horse; behaviour; welfare; stress; pain; fear horse; behaviour; welfare; stress; pain; fear
►▼ Show Figures 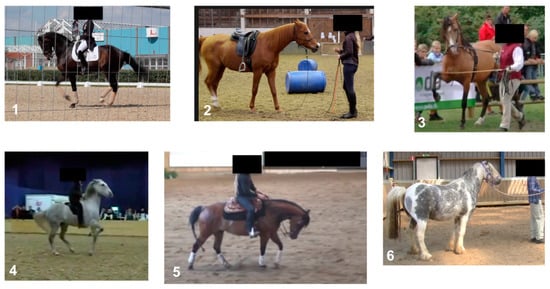