Interactions between Invasive Monk Parakeets (Myiopsitta monachus) and Other Bird Species during Nesting Seasons in Santiago, Chile
Next Article in Special Issue

Use of Complementary Natural Feed for Gastrointestinal Nematodes Control in Sheep: Effectiveness and Benefits for Animals
Previous Article in Journal

Changed Caecal Microbiota and Fermentation Contribute to the Beneficial Effects of Early Weaning with Alfalfa Hay, Starter Feed, and Milk Replacer on the Growth and Organ Development of Yak Calves
Previous Article in Special Issue

Even if it is an important achievement from a biodiversity conservation perspective, the documented increase in abundance of the four native European wild Caprinae (Rupicapra rupicapra, R. pyrenaica, Capra ibex, C. pyrenaica) can also be a matter of concern, since tighter and more frequent contact with sympatric livestock implies a greater risk of transmission of emerging and re-emerging pathogens. This article reviews the main transmissible diseases that, in a European scenario, are of greater significance from a conservation perspective. Epidemics causing major demographic downturns in wild Caprinae populations during recent decades were often triggered by pathogens transmitted at the livestock/wildlife interface.

Population density and distribution of the four native European wild Caprines (Rupicapra rupicapra, Rupicapra pyrenaica, Capra ibex, Capra pyrenaica) have increased in recent decades. The improved conservation status of this valuable wildlife, while a welcome event in general terms, is at the same time a matter of concern since, intuitively, frequent and tighter contacts with sympatric livestock imply a greater risk of cross-transmission of emerging and re-emerging pathogens, and offer unexpected opportunities for pathogens to spread, persist and evolve. This article recalls the transmissible diseases that are perceived in Europe to be of major significance from a conservation perspective, namely brucellosis (BRC) by Brucella melitensis, infectious kerato-conjunctivitis (IKC) by Mycoplasma conjunctivae, pestivirosis (PV) by the border disease virus strain 4 and mange by Sarcoptes scabiei. Special emphasis has been put on the epidemiological role played by small domestic ruminants, and on key knowledge needed to implement evidence-based prevention and control strategies. Remarkably, scientific evidence demonstrates that major demographic downturns in affected wild Caprinae populations in recent decades have often been triggered by pathogens cross-transmitted at the livestock/wildlife interface.
Keywords:
transmissible diseases; livestock/wildlife interface; sylvatic reservoir; Europe

The population density of the four native European wild Caprinae, namely, the Northern chamois Rupicapra rupicapra, Southern chamois Rupicapra pyrenaica, Alpine ibex Capra ibex and Iberian ibex Capra pyrenaica, has continued to increase in recent decades [1,2]. In parallel, the distribution area of these species has remarkably widened (Figure 1 and Figure 2).
The natural colonization of low altitude mountains by the Northern chamois [3] and the reintroduction of the Alpine ibex, Abruzzo chamois R. pyrenaica ornata and Iberian ibex in mountain ranges where they became extinct during the 19–20th centuries [4,5,6] are well-known examples of this ongoing trend. Increased abundance of these mountain-dwelling ruminants is a welcome event that represents the prerequisite for: (1) the implementation of far-sighted management strategies of primary resources, such as alpine meadows and the montane mixed forests; (2) the conservation of key animal species, particularly large predators; (3) the strengthening of environmental awareness and culture amongst citizens, favoring a greater detectability of wild Caprinae compared to other wildlife; (4) the strengthening of wildlife-related tourism, spanning from hunting to targeted gastronomy, photo- and video documentation and guided naturalistic observations. However, frequent and tighter contacts between livestock and wild ruminants intrinsically imply a risk of the cross-transmission of emerging and re-emerging pathogens. Several diseases and parasites of wild Caprinae are shared with domestic ruminants due to close phylogenetic relationships, particularly sheep and goats. In most of the European mountain ranges, wild and domestic Caprinae are used to sharing the range on a seasonal basis (late spring and summer), when transhumant flocks are moved to sub-alpine and alpine meadows. During this period, domestic and wild species may get in direct or indirect contact [7], permitting the cross-transmission of pathogens [8]. The aim of this article is to recall infectious and parasitic diseases that are currently perceived of as major of concerns in native wild Caprinae in Europe. The term “concern” is intended here as “concern in a conservation perspective”, namely, because of the direct demographic impact of the diseases and the indirect effects due to possible wildlife population reduction, as a preventive and control measure, within national or continent-wide eradication programs in livestock. Special emphasis will be put on the epidemiological role played by sympatric wild and domestic Caprinae, and on the applicability of prevention and control strategies to reduce the impact of the concerned diseases. This review was conducted using a two-step approach. Firstly, diseases of major concern were identified based on presentation topics from the past 25 years at meetings of the European Wildlife Disease Association (EWDA) [9] and Groupe d’Etude sur l’Ecopathologie de la Faune Sauvage de Montagne (GEEFSM) [10], specifically, renewed spots of aggregation for specialists in the diseases of mountain-dwelling ruminants in Europe. Secondly, relevant research papers were searched and selected through three electronic databases (Scopus, PubMed, Web of Science) by taking into account coherence with the specific focus and ranking of the journals. Selected emergencies and related geographic distribution are summarized respectively in Table 1, Table 2 and Table 3.

In this review, evidence or sound plausibility has been provided that some of the major outbreaks reported in wild Caprinae in Europe were triggered by pathogens initially cross-transmitted at the interface with livestock (primarily sheep and goats). When the focus is shifted from triggering to persistence in wildlife populations, trials spanning over several decades have unambiguously shown that:

(1)
sheep and goats can no longer be considered the exclusive or the main reservoir of M. conjunctivae for wild Caprinae;
(2)
following suspected infection from livestock, chamois (Rupicapra spp.) and ibex (Capra spp.) have rapidly turned into the exclusive reservoir hosts of S. scabiei wherever SM outbreaks have been reported in wild ruminant hosts; and
(3)
similar to (2), Southern chamois R. pyrenaica pyrenaica is currently deemed to be the single reservoir of the specific BDV4 variant, and the Alpine ibex is considered the single reservoir of B. melitensis in the French Alps.

Little can be done at the livestock/wild Caprinae interface to control emergencies. As an exception (the single one to our knowledge), cohabitation of chamois with BDV-infected sheep should be encouraged in order to strengthen herd immunity against the specific BDV-4 strain [49]. In general, prevention of BDV outbreaks seems unlikely and, due to current limitations (including the unavailability of performant vaccines [74]), it would be difficult to prevent new BDV livestock strains from adapting to chamois, as occurred in the Central Pyrenees. In contrast, the active surveillance of transhumant goat flocks before moving uphill in cohabitation with wild Caprinae, and their mass treatment with effective acaricides, seem pivotal measures to reducing the risk that SM may spread from scabietic or carrier domestic goats to naïve herds of their sylvatic relatives. Europe-wide eradication of SM in goats should be the optimal goal to achieve in the near future. As of BRC in the French Alps, the “problem” is the possible spillback to sanitated livestock. Evidence shows that this risk has remained extremely low for more than 25 years, when B. melitensis was established as a new unexpected wild reservoir host. Awareness of the limited spillback risk in the Bargy massif does not impede improved biosecurity measures, including fencing and the use of shepherd dogs, that can be adopted at the livestock/wildlife interface, or that the adaptive management approach currently in progress (e.g., capture followed by test-and-slaughter or test-mark-and release according to results of a rapid BRC diagnostic test) be prolonged in time to reduce the prevalence of BRC in these particular ibex [20]. In conclusion, it is our opinion that in mountain systems in Europe, the conservation-oriented management of animal health at the livestock/wildlife interface should prioritize measures and strategies aimed to prevent the introduction of a limited range of “major” pathogens into naïve herds of wild Caprinae. To achieve this ambitious goal, the limited resources should target applied research and the active surveillance of these pathogens in view of an early detection in putative domestic sources, with a special focus on uphill transhumant flocks.

The authors wish to thank Teresio Balbo for thoughtful conversations on life and wildlife. 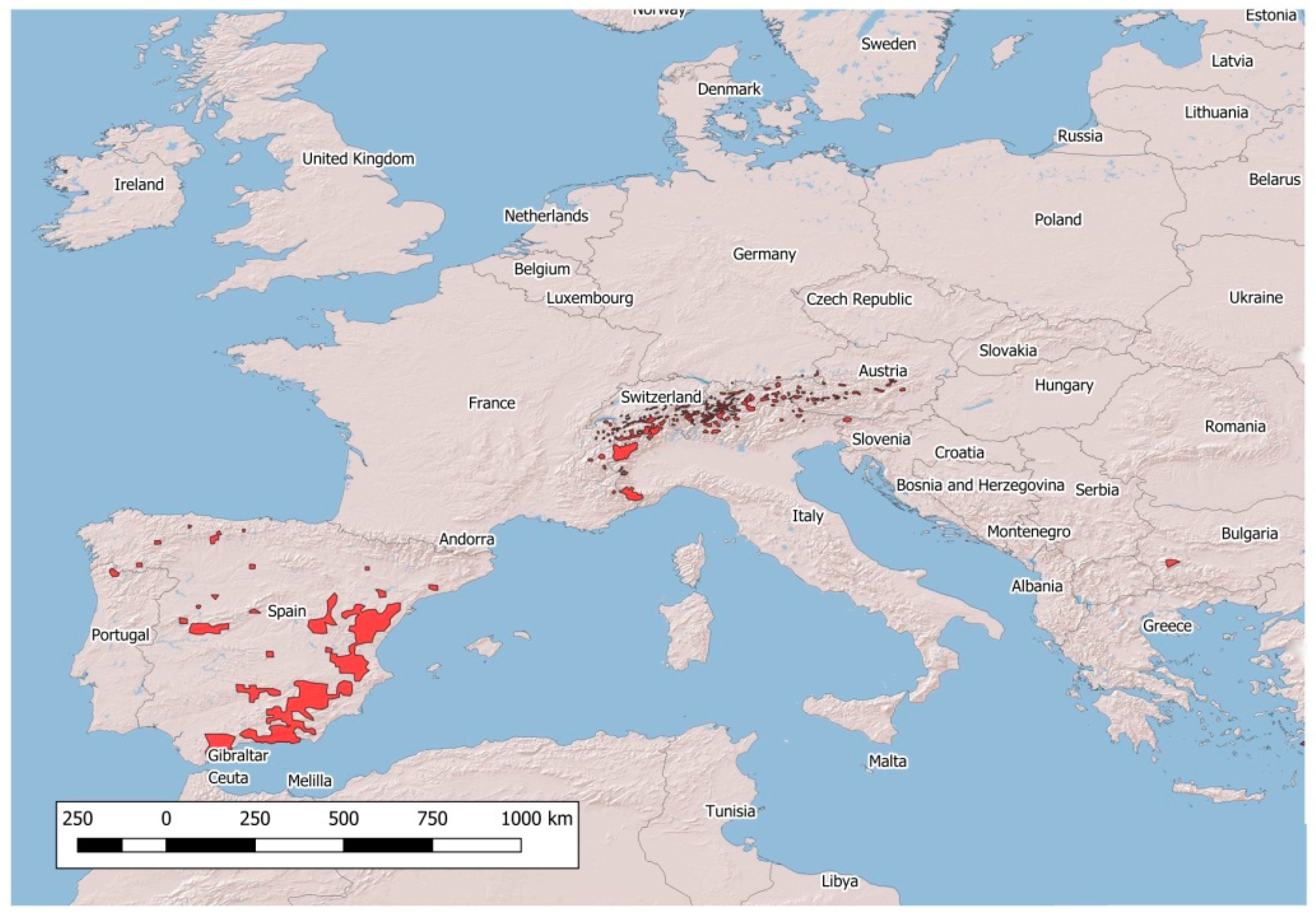