Effects of Mannan Oligosaccharides on Gas Emission, Protein and Energy Utilization, and Fasting Metabolism in Sheep
Next Article in Special Issue

A Review on Mammary Tumors in Rabbits: Translation of Pathology into Medical Care
Previous Article in Journal

Expression of Myoepithelial Markers in Mammary Carcinomas of 119 Pet Rabbits

Mammary cancer is a serious health issue in pet rabbits; prognostic factors are unknown. In a normal mammary gland, glandular secretory cells are surrounded by a single continuous layer of myoepithelial cells. In non-invasive mammary carcinomas, tumor cells are delineated by an intact myoepithelial layer, which is gradually lost to invasive carcinomas. The main aim of this study was to determine in rabbit mammary carcinomas (n = 119) the expression of myoepithelial markers that have prognostic significance in human cancer. Results show that all cases contained some retained myoepithelial cells. In 93% of the tumors, neoplastic cells expressed the myoepithelial marker calponin. There was a statistically significant association between higher percentages of calponin-containing cancer cells and histological features indicative of a better tumor differentiation, i.e., a lower proliferation of tumor cells, an increased percentage of tubular growth within the tumor, and a lower tumor grade, respectively. These results suggest that rabbit mammary carcinomas develop from progression of non-invasive cancer forms, and that calponin expression in cancer cells likely represents a favorable prognostic factor. The latter hypothesis has to be confirmed in long-term follow-up studies.

Most mammary tumors in pet rabbits are carcinomas; prognostic factors are unknown. The aim of this study on rabbit mammary carcinomas was to determine the expression of myoepithelial markers that have a prognostic relevance in human cancers. Mammary carcinomas (n = 119) of female or female-spayed pet rabbits were immunostained for cytokeratin AE1/AE3, vimentin, smooth muscle actin (SMA), and calponin; and percentages of non-neoplastic myoepithelial cells (ME cells) and calponin-positive neoplastic cells were determined. Using statistical analysis, data were correlated with the age of the rabbits and histological tumor characteristics. All carcinomas contained retained spindle-shaped ME, while 115 also contained hypertrophic ME (HME). A statistically significant relationship existed between a higher age and an increase in HME. In 111 carcinomas (93%), tumor cells expressed calponin. There was a significant correlation between higher percentages of calponin-positive tumor cells and a lower mitotic count, an increased percentage of tubular growth, and a lower grading score, respectively. Data suggest that pet rabbit mammary carcinomas develop from progression of in situ cancer and that the extent of calponin expression in tumor cells influences their biological behavior. These results provide the basis for a long-term follow-up on the prognostic significance of calponin expression in mammary cancer cells. View Full-Text
Keywords: calponin; histopathology; immunohistochemistry; mammary carcinoma; myoepithelial cells; Oryctolagus cuniculus; pet rabbit; statistical analysis calponin; histopathology; immunohistochemistry; mammary carcinoma; myoepithelial cells; Oryctolagus cuniculus; pet rabbit; statistical analysis
►▼ Show Figures 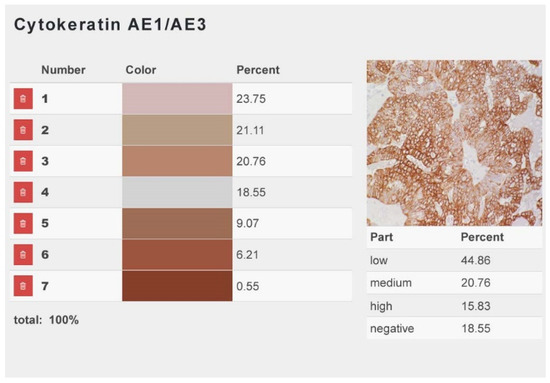