Single and Combined Effects of Clostridium butyricum and Saccharomyces cerevisiae on Growth Indices, Intestinal Health, and Immunity of Broilers

The number of pigs sold per sow per year is a key determinant of productivity and therefore, profitability of pork production. This is currently limited by high levels of piglet mortality prior to weaning, with lack of oxygen during the birth process a primary cause of piglet death and failure to thrive. This experiment investigated the effect of adding magnesium sulphate to sow diets fed during the last five days of pregnancy on piglet survival and measures of viability at, and soon after, birth. The addition of magnesium sulphate to sow diets resulted in piglets which showed signs of increased viability and vitality immediately after birth, with the beneficial effects most evident in ‘at risk’ piglets. These data suggest that magnesium sulphate supplementation at the end of gestation represents a commercially viable solution to reduce the negative effects of the birth process on piglet viability, which may in turn improve survival.

Piglet hypoxia during farrowing is common and can lead to increased stillbirth rates, reduced piglet vitality, and an increased risk of preweaning mortality. Magnesium sulfate (MgSO4) has successfully been used as a neuroprotectant and readily crosses the placenta in humans. Based on this human data, the aim of this study was to determine if maternal dietary supplementation with MgSO4 prior to farrowing would reduce the impact of piglet hypoxia during the peri-natal period. Five days prior to farrowing, Large White × Landrace sows were fed either standard lactation sow diet (Cont; n = 30) or lactation diet supplemented to deliver 21 g/day MgSO4 (Mg; n = 31). There was no effect of treatment on the percentage of stillborn piglets (p > 0.05). However, Mg piglets tended to have higher vitality scores immediately after birth (p < 0.10), were quicker to suck, and had higher day one blood glucose concentrations when compared with Cont piglets (p < 0.05). Furthermore, hypoxic piglets born to Cont sows did not gain weight from birth to 24 h, but Mg piglets did (p < 0.05), suggesting improved colostrum ingestion. In conclusion, MgSO4 may reduce the negative impacts of birth hypoxia, improving piglet vitality, and colostrum intake during the peri-natal period. View Full-Text
Keywords: hypoxia; magnesium; colostrum; thermoregulation; vitality; piglet survival hypoxia; magnesium; colostrum; thermoregulation; vitality; piglet survival
►▼ Show Figures 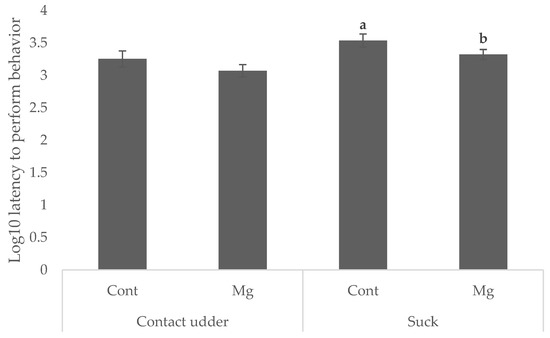