Should the Contribution of One Additional Lame Cow Depend on How Many Other Cows on the Farm Are Lame?
Previous Article in Journal

The Weak Spots in Contemporary Science (and How to Fix Them)

Despite being important to the general public, the monitoring of animal welfare is not systematic. The Danish political parties agreed in 2012 to establish national animal welfare indices for cattle and pigs, and here we assess the potential for using data from the systematic meat inspection to contribute to such indices. We demonstrate that although a number of recordings may be relevant for animal welfare, differences in recording practices between slaughterhouses can be so large that correction is not deemed feasible. For example, significant differences in tail fractures in pigs and sows were recorded between abattoirs, despite the fact that this condition should be easier to diagnose compared to e.g., the more consistently recorded “chronic arthritis” in cows. The study findings suggest that some recordings may be useful for inclusion in animal welfare indices, but that their relevance should be assessed along with the recording practices if included. Furthermore, factors such as appropriate behaviour are also important to monitor as part of the welfare of both cattle and pigs.

National welfare indices of cattle and pigs are constructed in Denmark, and meat inspection data may be used to contribute to these. We select potentially welfare-relevant abattoir recordings and assess the sources of variation within these with a view towards inclusion in the indices. Meat inspection codes were pre-selected based on expert judgement of having potential animal welfare relevance. Random effects logistic regression was then used to determine the magnitude of variation derived at the level of the farm or abattoir, of which farm variation might be associated with welfare, whereas abattoir variation is most likely caused by differences in recording practices. Codes were excluded for use in the indices based on poor model fit or a large abattoir effect. There was a large abattoir effect for most of the codes modelled and these codes were deemed to be not appropriate to be carried forward to the welfare index. A few were found to be potentially useful for a welfare index: Eight for slaughter pigs, 15 for sows, five for cattle <18 months of age, and six for older cattle. The absolute accuracy of each code/combination could not be assessed, only the relative variation between farms and abattoirs. View Full-Text
Keywords: abattoir recordings; animal welfare; cattle; meat inspection; pigs; slaughterhouse abattoir recordings; animal welfare; cattle; meat inspection; pigs; slaughterhouse
►▼ Show Figures 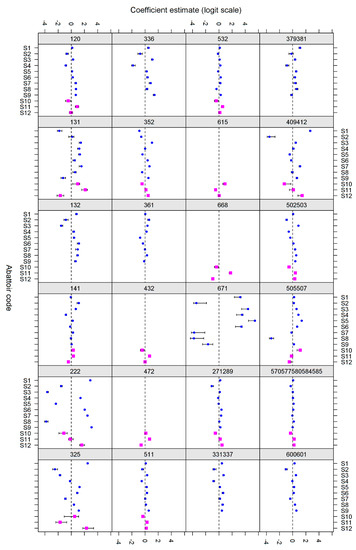