An Attempt at Captive Breeding of the Endangered Newt Echinotriton andersoni, from the Central Ryukyus in Japan
Previous Article in Journal

Spatial and Temporal Habitat Use of an Asian Elephant in Sumatra

A wild Sumatran elephant radio-monitored near a conservation center from August 2007–May 2008 used medium- and open-canopy land cover more than expected, but closed canopy forests were used more during the day than at night. When in closed canopy forests, elephants spent more time near the forest edge. Effective elephant conservation strategies in Sumatra need to focus on forest restoration of cleared areas and providing a forest matrix that includes various canopy types.

Increasingly, habitat fragmentation caused by agricultural and human development has forced Sumatran elephants into relatively small areas, but there is little information on how elephants use these areas and thus, how habitats can be managed to sustain elephants in the future. Using a Global Positioning System (GPS) collar and a land cover map developed from TM imagery, we identified the habitats used by a wild adult female elephant (Elephas maximus sumatranus) in the Seblat Elephant Conservation Center, Bengkulu Province, Sumatra during 2007–2008. The marked elephant (and presumably her 40–60 herd mates) used a home range that contained more than expected medium canopy and open canopy land cover. Further, within the home range, closed canopy forests were used more during the day than at night. When elephants were in closed canopy forests they were most often near the forest edge vs. in the forest interior. Effective elephant conservation strategies in Sumatra need to focus on forest restoration of cleared areas and providing a forest matrix that includes various canopy types. View Full-Text
Keywords: conservation; edge; elephant; Elephas; forest; habitat use; Sumatra conservation; edge; elephant; Elephas; forest; habitat use; Sumatra
►▼ Show Figures 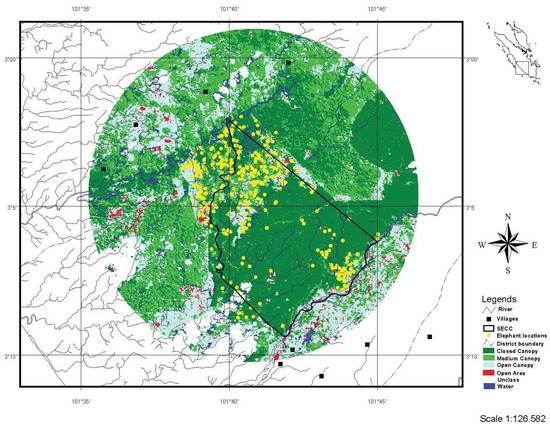