Pet Ownership and Evacuation Prior to Hurricane Irene

The Pantanal is a wetland in the center of South America, (140,000 km² in Brazil), in the Upper Paraguay River Basin. Because of its diverse and abundant wildlife, it is recognized as one of the most important freshwater ecosystems in the world. Many endangered species occur there, including jaguar; waterfowl are exceptionally abundant. Relief varies between the low, and flat floodplain, and the surrounding non-flooded plateau areas. Rainfall shows inter-annual variability, influencing the flooding patterns. Historical climate instability of severe multi-annual flood and dry events has affected animals’ habitats as well as their community structure, population size and behavioral ecology.

Flooding throughout the Pantanal is seasonal. The complex vegetative cover and high seasonal productivity support a diverse and abundant fauna. A gradient in flood level supports a range of major habitats in a complex mosaic with annual seasonality. The rivers and streams are lined with gallery forests, and other arboreal habitats exist in the more elevated areas. The remainder is either grasslands or seasonally flooded grasslands. The regional flora and fauna are adapted to annual water fluctuation. However, an inter-annual series of higher or lower rainfalls has caused either severe floods or drastic dry seasons. Large scale climate phenomena such as greenhouse gases, El Niño and La Niña influence the seasonality of floods and droughts in the Pantanal. Knowledge of severe floods and droughts, which characterize natural disasters, is fundamental for wildlife management and nature conservation of the Pantanal. Plants and wild animals, for example, are affected by tree mortality in riparian forest after extreme flooding, with consequent habitat modification for wild animals. In addition, human activities are also affected since cattle ranching and ecotourism are economically important in the region, and when seasons with unusual floods or droughts occur, areas with human settlements are impacted. View Full-Text
Keywords: biodiversity; conservation; floodplain; Pantanal biodiversity; conservation; floodplain; Pantanal
►▼ Show Figures 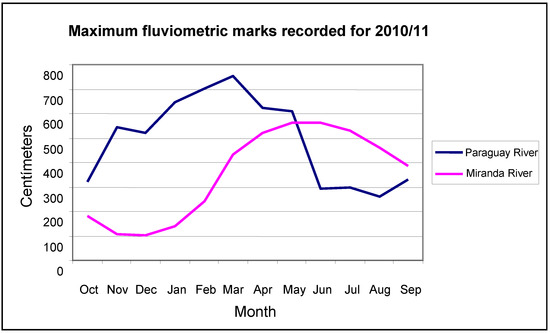