Udder conformation traits are economically important for dairy animals in the dairy industry. Milk production loss can be reduced via a better udder structure in dairy cattle. Udder traits are related to milk production and the somatic cell count, which is a sign of mammary infections (mastitis); as such, it is vital to understand the genetic architecture underlying udder traits in Holstein Friesian cattle for genetic development and long-term selection. Through a GWAS on udder structure traits in Chinese Holstein cattle, we identified several significant single-nucleotide polymorphisms (SNPs) and candidate genes associated with udder traits. The results could provide useful information regarding the genetics architecture of udder structure traits, thus improving the genetic information, health, longevity, and production of dairy cattle. 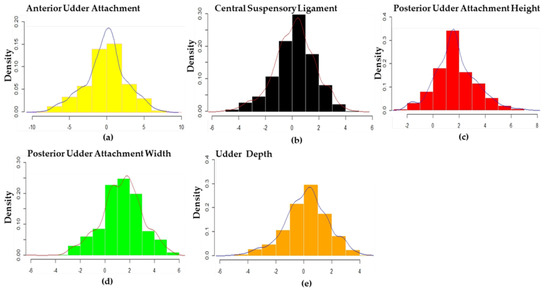