The Chemical Ecology of Elephants: 21st Century Additions to Our Understanding and Future Outlooks
Previous Article in Journal

Effect of Linseeds and Hemp Seeds on Milk Production, Energy and Nitrogen Balance, and Methane Emissions in the Dairy Goat

Despite our common connotations with the term “greeting”, such behaviours in non-human societies are not exclusively employed in the context of reunion. For example, these multimodal signals can function to test bonds, promote cooperation, or facilitate further positive interactions between individuals, as well as to ease tension and update uncertain relationships at reunion events. A common behaviour in male elephants is for a male to direct his trunk to a same-sex conspecific’s mouth, temporal gland, or genitals. Such behaviours are often labelled as greetings, and in addition to being gestural and tactile signals, may simultaneously enable olfactory assessment of aspects of the target male’s phenotype. We analysed trunk-mediated greetings performed by different aged male elephants at aggregations in an all-male area. Despite considerable mixing of new potential interactors, in a system with high fission-fusion dynamics, we found no evidence that males preferentially targeted elephants met new at aggregations with greetings. Adolescents greeted at higher rates than adults. All males, apart from older adolescents preferably greeted age-matched males. In male-male elephant communication, these behaviours likely function to facilitate further positive interaction, or assess aspects of phenotype between similar aged males occupying the same ecological space, rather than as a reunion display.

A common behavioural interaction between male African elephants is for an actor to direct his trunk to contact a same sex conspecific’s mouth, temporal gland, or genital region. Such behaviours are often referred to as “greetings”. Along with its inherent tactile element, these behaviours also likely provide olfactory information to actors concerning aspects of the target’s phenotype, including sexual status, feeding history, individual identity, and emotional state. Here, we explore whether the age and novelty of potential interactors affect the choice of individuals targeted by male African elephants for these trunks to scent emitting organ (SEO) behaviours at social hotspots in a male-dominated area. Male elephants of all ages, except older adolescents aged 16–20 years, preferentially targeted elephants of the same age class for trunk-to-SEO behaviours. Elephants younger than 26 years did not direct trunk-to-SEO behaviours to mature bulls (26+ years) more than expected by chance, suggesting these behaviours are not primarily used for younger males to establish contact with, or obtain information from or about older, more experienced individuals. We also found no evidence that males directed these behaviours preferentially to new individuals they encountered at male aggregations (compared to those they arrived in groups with), suggesting these behaviours are not primarily employed by males as a reunion display to establish relationships between new individuals or update relationships between familiar individuals separated over time. Age-mates may be preferentially targeted with these behaviours as a means to facilitate further interaction with partners (e.g., for sparring activity), or as a safe way to assess relative dominance rank in similarly aged and hence, size and strength, matched dyads. Our results suggest male African elephants use close contact trunk-to-SEO behaviours continuously over time, to facilitate positive relationships, test willingness to interact, and assess aspects of phenotype, between males occupying the same ecological space. View Full-Text
Keywords: male-male communication; olfactory assessment; greetings; elephants; long-lived mammals; tactile communication male-male communication; olfactory assessment; greetings; elephants; long-lived mammals; tactile communication
►▼ Show Figures 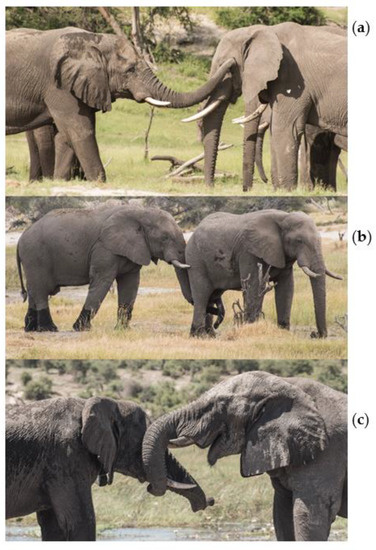