Emergence and Spread of Cephalosporinases in Wildlife: A Review

Antimicrobial resistance (AMR) is one of the global public health challenges nowadays. AMR threatens the effective prevention and treatment of an ever-increasing range of infections, being present in healthcare settings but also detected across the whole ecosystem, including wildlife. This work compiles the available information about an important resistance mechanism that gives bacteria the ability to inactivate cephalosporin antibiotics, the cephalosporinases (extended-spectrum beta-lactamase (ESBL) and AmpC beta-lactamase), in wildlife. Through a rigorous systematic literature review in the Web of Science database, the available publications on this topic in the wildlife sphere were analysed. The emergence and spread of cephalosporinases in wildlife has been reported in 46 countries from all continents (52% in Europe), with descriptions mainly in birds and mammals. The most widely disseminated cephalosporinases in human-related settings (e.g. CTX-M-1, CTX-M-14, CTX-M-15 and CMY-2) are also the most reported in wildlife, suggesting that anthropogenic pressure upon natural environments have a strong impact on antimicrobial resistance spread, including the dissemination of genes encoding these enzymes. Our work highlights the urgence and importance of public and ecosystem health policies, including improved surveillance and control strategies that breakdown AMR transmission chains across wildlife, as part of an integrated strategy of the One Health approach.

In the last decade, detection of antibiotic resistant bacteria from wildlife has received increasing interest, due to the potential risk posed by those bacteria to wild animals, livestock or humans at the interface with wildlife, and due to the ensuing contamination of the environment. According to World Health Organization, cephalosporins are critically important antibiotics to human health. However, acquired resistance to β-lactams is widely distributed and is mainly mediated by extended-spectrum beta-lactamase and AmpC beta-lactamases, such as cephalosporinases. This work thus aimed to compile and analyse the information available on the emergence and dissemination of cephalosporinases in wildlife worldwide. Results suggest a serious scenario, with reporting of cephalosporinases in 46 countries from all continents (52% in Europe), across 188 host species, mainly birds and mammals, especially gulls and ungulates. The most widely reported cephalosporinases, CTX-M-1, CTX-M-14, CTX-M-15 and CMY-2, were also the most common in wild animals, in agreement with their ubiquity in human settings, including their association to high-risk clones of Escherichia coli (E. coli), such as the worldwide distributed CTX-M-15/ST131 E. coli. Altogether, our findings show that anthropogenic activities affect the whole ecosystem and that public policies promoting animal and environmental surveillance, as well as mitigation measures to avoid antimicrobial misuse and AMR spread, are urgently needed to be out in practise. View Full-Text
Keywords: one health; wildlife; cephalosporinases; ESBL; AmpC; CTX-M one health; wildlife; cephalosporinases; ESBL; AmpC; CTX-M
►▼ Show Figures 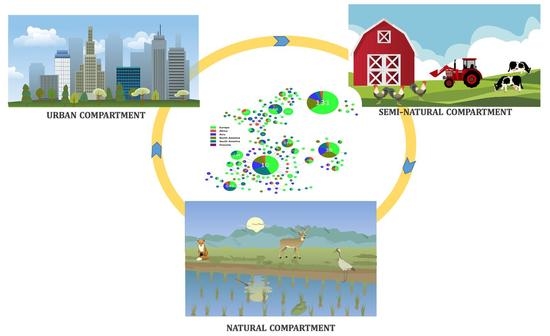