The Influence of Breed, Sex, Origin and Housing Conditions on Undesirable Behaviors in Ancient Dog Breeds

Abnormal, repetitive behaviors often pose a problem for dog owners. Such behaviors are considered undesirable if they pose a nuisance or a danger to humans. This study aimed to identify factors (breed, sex, origin, housing conditions) and situations that contribute to undesirable behaviors, such as aggression towards humans and other dogs/animals, separation anxiety, excessive vocalization, and oral and locomotion behaviors in the ancient dog breeds Akita, Alaskan Malamute, Basenji, Samoyed and Siberian husky. Undesirable behaviors were analyzed based on the results of a survey involving dog owners. Undesirable behaviors were most frequently reported in Akitas, Siberian huskies and Samoyeds, and they were more prevalent in males than in females and dogs living indoors with or without access to a backyard. Aggressive behaviors towards other dogs and animals, excessive vocalization and undesirable motor activities posed the greatest problems in ancient dog breeds.

Abnormal repetitive behaviors often pose a problem for dog owners [1]. Such behaviors are considered problematic if they pose a nuisance or a danger to household members [2]. In turn, behaviors that are unacceptable for dog owners are described as undesirable, even if they are consistent with an animal’s ethogram of normal behavior [3,4,5]. Examples of undesirable behavior include excessive activity, excitation, vocalization or unprovoked aggression [6,7]. Stereotypies are repetitive, constant acts that serve no obvious purpose [8]. In turn, compulsive behaviors are defined as repetitive acts that exceed normal functions and disrupt daily activities [9,10,11]. Compulsive behaviors can be both physical and psychological. They are observed in many animal species, including companion animals, zoo animals and livestock [10,12]. According to Luescher et al. [13], stereotypic behaviors may be present in 1.19% to 3.3% of domestic animals in the USA. According to many authors, behavioral problems emerge in stressful situations when an animal cannot physically escape from the source of stress or in the absence of exciting stimuli [10,14,15,16]. Such problems also arise when animals are unable to cope with sudden changes in their environment. Withheld rewards also cause frustration, which can lead to stereotypes.
Canine behavioral problems are affected by various factors, such as breed, age, sex, health condition, housing conditions, and the relationship between a dog and its owner [10,17,18,19]. Dogs that are not exposed to various environmental stimuli during socialization in early life are more likely to develop behavioral problems in adulthood [4,15]. Such behaviors include over-grooming (excessive licking), excessive motor behavior (tail chasing, spinning in circles), hunting, feeding (guarding food and the food bowl, pica) and sexual behavior. However, aggression and excessive vocalization are the most frequent problematic and undesirable behaviors in dogs [15,16,20,21]. Owners do not always recognize changes in a dog’s behavior or interpret such changes as harmless play [22,23]. In addition, most owners make attempts to eliminate undesirable behaviors only when their symptoms are intensified and become predominant in a dog’s daily behavior [24]. Dog owners claim that abnormal behavior interferes with a dog’s daily functioning by preventing the animal from eating, playing and interacting with people [11,25], and dogs displaying behavioral problems are often placed in a shelter or euthanized [4,21,26,27]. However, some owners seek the advice of canine behaviorists. In addition to the home environment, compulsive and stereotypic behaviors are often observed in shelters, where dogs live in small, confined spaces with other animals in an unstimulating environment [28,29,30].
Ancient dog breeds are highly demanding when it comes to housing conditions and relationships with humans. These breeds are most closely related to wolves [31], which is reflected in their character traits. Parker et al. [31] studied 85 dog breeds and identified 14 ancient breeds, including Akita, Alaskan Malamute, Basenji, Samoyed and Siberian husky. These breeds are intelligent, sociable, active, boisterous and need regular outdoor exercise. Ancient dog breeds are independent and reluctant to follow commands. For these reasons, ancient dog breeds may be difficult to train. In the work of Coile [32], ancient dog breeds scored one to three points on a five-point scale for ease of training. This result indicates that ancient breeds are difficult or very difficult to train. Ancient breeds are also highly territorial and have a strong hunting instinct. These character traits can lead to aggressive behavior towards humans and other dogs and animals [32]. Many dog buyers are not aware of the characteristics and specific needs of ancient breeds. Dogs can display undesirable behaviors if their biological and behavioral needs are not met [33,34].
Because ancient dog breeds have specific character traits [32] and that behavioral problems in these breeds have never been discussed in the literature, this study was undertaken to explore undesirable behaviors in popular ancient dog breeds in Poland: Akita, Alaskan Malamute, Basenji, Samoyed and Siberian husky. According to the Polish Kennel Club, there are 2726 dogs of ancient breeds in Poland (including 1080 males and 1646 females). However, this figure accounts for the animals registered with the Polish Kennel Club, whereas the population of the remaining ancient breeds in Poland is difficult to estimate due to insufficient data.
This study aimed to identify factors (breed, sex, origin, housing conditions) and situations that contribute to undesirable behaviors, such as aggression towards humans and other dogs/animals, aggression at mealtime, separation anxiety, excessive vocalization, and undesirable oral and locomotion behaviors in ancient dog breeds: Akita, Alaskan Malamute, Basenji, Samoyed and Siberian husky.

Undesirable behaviors were analyzed in selected ancient dog breeds, including Akita, Alaskan Malamute, Basenji, Samoyed and Siberian husky, based on an online survey conducted among the users of social networking sites dedicated to ancient dog breeds. The survey was anonymous, and it was conducted between 18 August 2019 and 27 September 2019. A total of 897 respondents participated in the survey.
The questionnaire is presented in Supplementary Materials. The survey was composed of two parts. The first part focused on factors that could contribute to undesirable behaviors, including breed, sex, origin, previous and present housing conditions. The respondents could select one of the following options to describe the dog’s origin: kennel registered with the Polish Kennel Club, private owner, unregistered kennel, foundation, shelter, or origin unknown. The following options could be selected to describe the dog’s previous and present housing conditions: indoors without backyard access (apartment), indoors with backyard access (house), outdoors in a kennel, outdoors without confinement, outdoors with confinement, other. In the question addressing the animal’s housing conditions, the respondents were asked to describe how dogs were kept as puppies or the last known housing conditions.
In the second part of the survey, the respondents were asked to describe undesirable behaviors and indicate situations in which such behaviors occurred (Table 1).
The respondents could describe other behavioral problems by selecting the “other” option.

Project financially supported by Minister of Science and Higher Education in the range of the program entitled “Regional Initiative of Excellence” for the years 2019–2022, Project no. 010/RID/2018/19, amount of funding 12,000,000 PLN.

Polish law: Act of 15.01.2015 on the Protection of Animals Used for Scientific and Educational Purposes, specifies terms and conditions on the protection of animals used for scientific or educational purposes, including conditions when an Ethical Approval is required. Ethical Approval is not required when, in accordance with the practice, the procedures performed do not cause pain, suffering, distress or permanent injury to the animals equal to or more severely needle-pricked. In this study: the animals were kept in standard domestic conditions, no one animal has been treated in any way or submitted to any experimental protocol. Thus, ethical approval was not required. 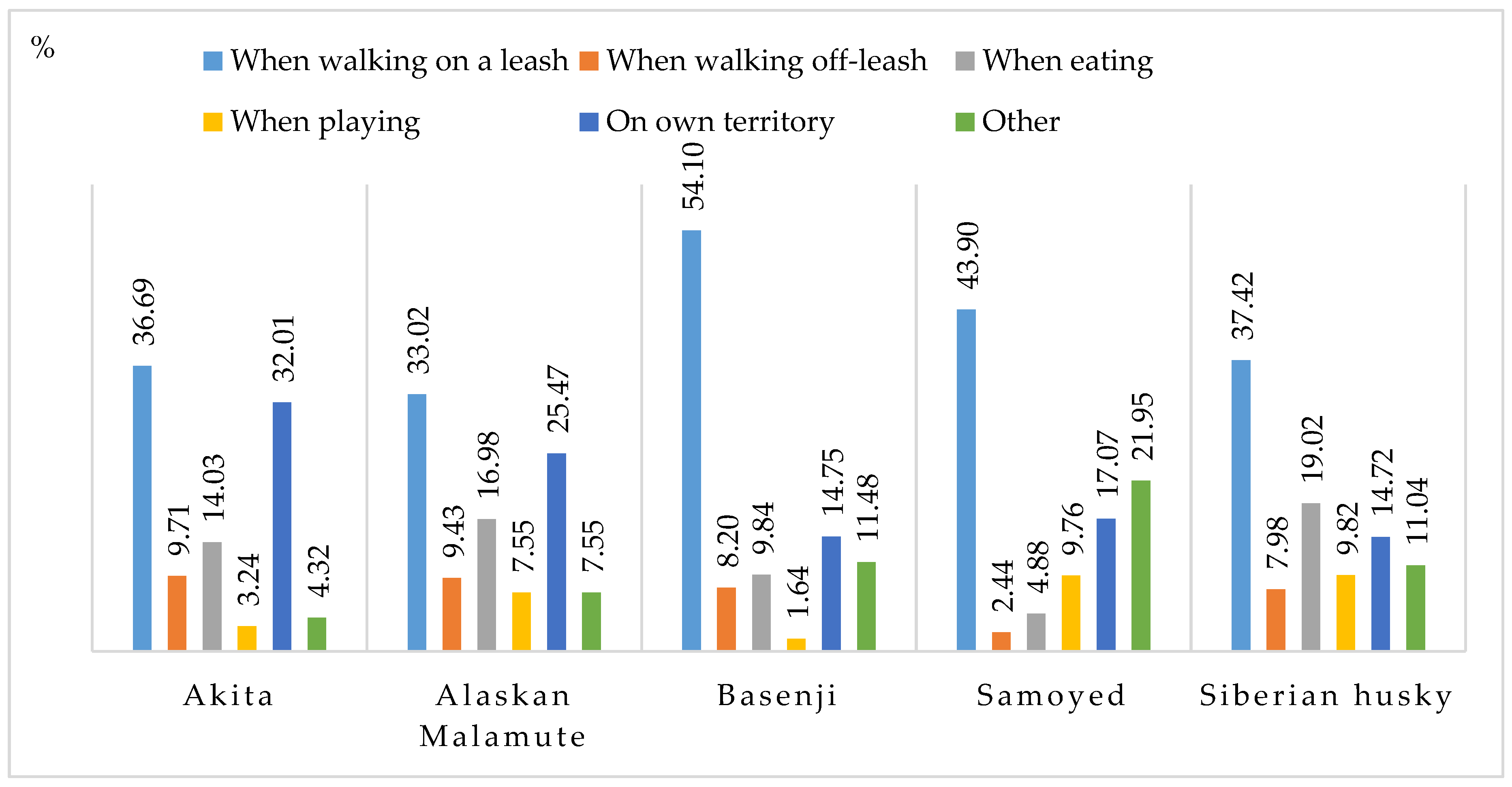 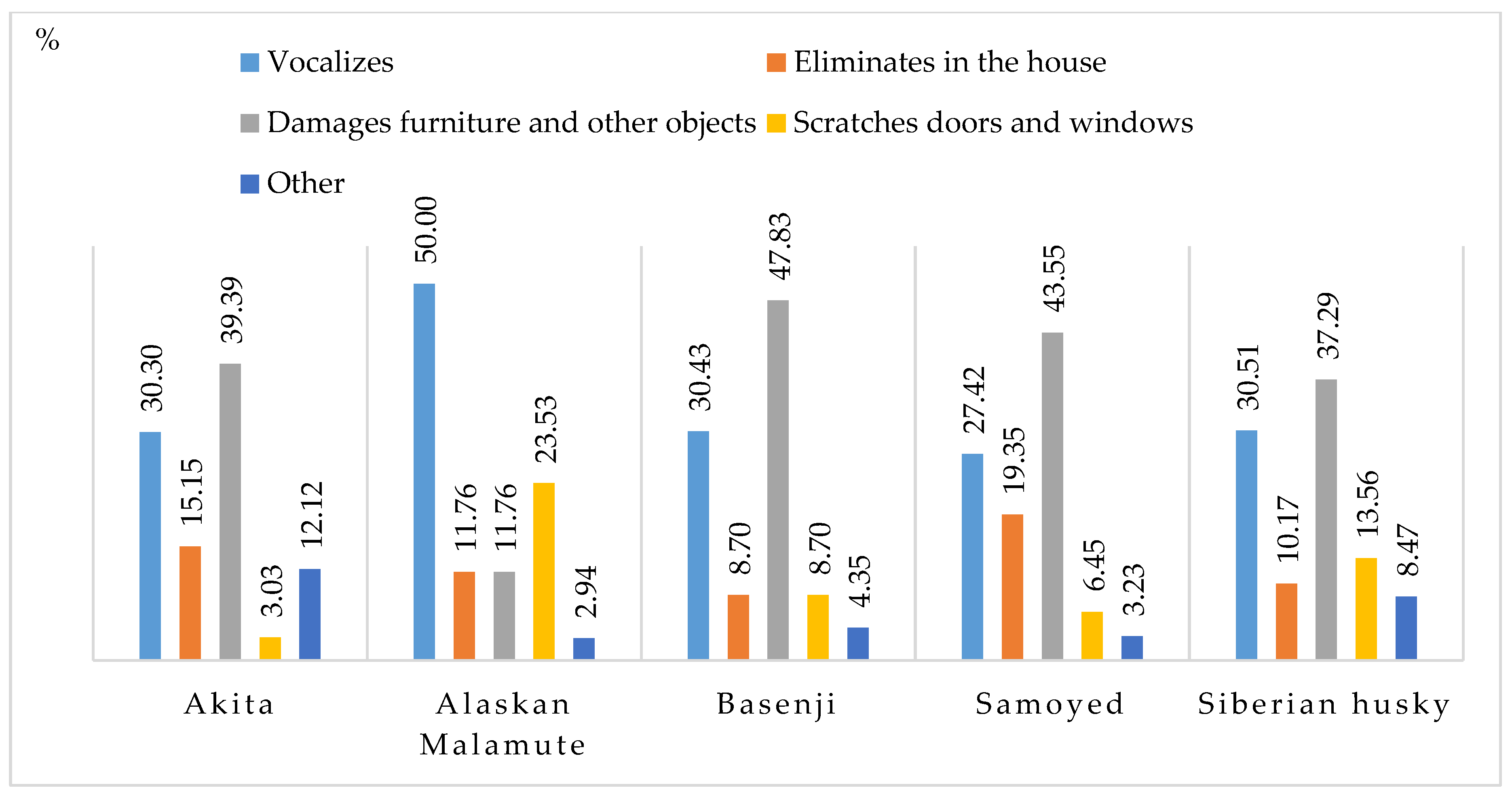 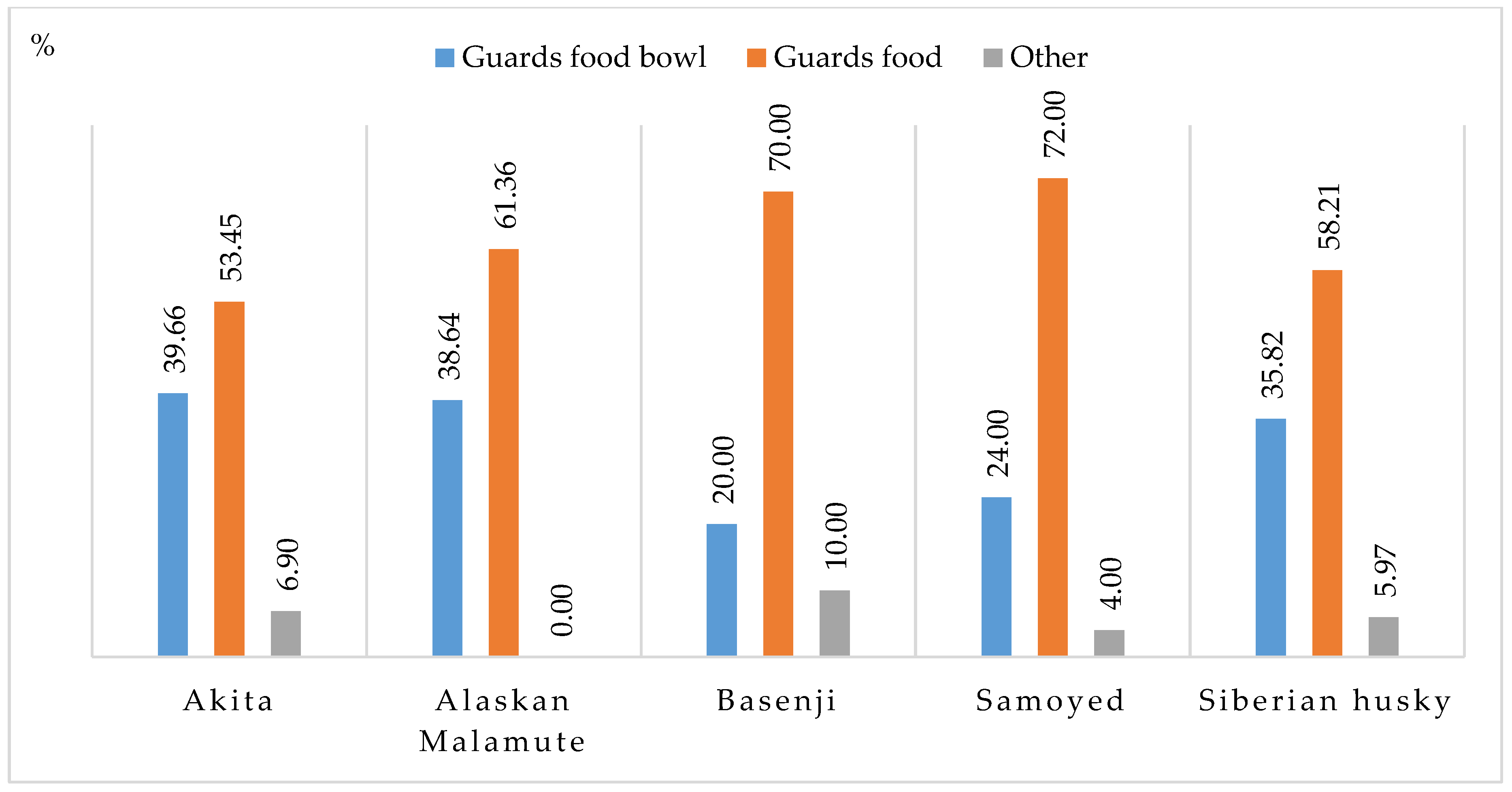