Ducks’ Growth, Meat Quality, Bone Strength, and Jejunum Strength Depend on Zeolite in Feed and Long-Term Factors
Next Article in Special Issue

Three weighted-stratified random-effects meta-analyses were performed to estimate the worldwide neonatal calf diarrhoea prevalence of mixed infections of the causative agents bovine rotavirus (BRV), bovine coronavirus (BCoV), Escherichia coli K99 (ETEC) and Cryptosporidium spp. (Crypto). The highest worldwide mean pooled prevalence was identified for BRV-Crypto (6.69%; confidence interval (CI): 4.27–9.51), followed by BRV-BCoV (2.84%; CI: 1.78–4.08) and BRV-ETEC (1.64%; CI: 0.76–2.75). In all concurrent infections with BRV, the highest mean prevalence was identified in calves with diarrhoea, in dairy herds and in the age classes of sampled animals between 0–14 days. The prevalence of the BRV-BCoV mixed infection is higher than expected based on the ratio of the occurrence of both individual infections in calves with diarrhoea.

Multiple enteropathogens such as bovine rotavirus (BRV), bovine coronavirus (BCoV), Escherichia coli K99 (ETEC) and Cryptosporidium spp. (Crypto) are the most common causes of calf diarrhoea during the first 30 days of animal age. Three weighted-stratified random-effects meta-analyses were performed to calculate the worldwide prevalence of mixed infections of the causative agents (i.e., BRV-BCoV, BRV-ETEC, BRV-Crypto) and their potential influencing factors. The meta-analysis covered 41 studies (94 sub-studies) in 21 countries that determined the presence or absence of mixed infections in global calf populations. The highest worldwide estimated pooled prevalence was identified for BRV-Crypto (6.69%), followed by BRV-BCoV (2.84%), and BRV-ETEC (1.64%). The chance of detecting BCoV in calves with diarrhoea was 1.83 higher in the presence of BRV compared to calves without BRV, whereby an inhibition effect (odds ratio: 0.77) was determined between BRV and Crypto infections. The diagnostic methods were identified as a significant influencing factor in the detection of all considered mixed infections, while the other analysed factors differed in relation to their effect on prevalence. In contrast to BRV-BCoV, the prevalence of BRV-ETEC and BRV-Crypto mixed infections followed the course of individual ETEC and Crypto prevalence related to the age class of the sampled animals.
Keywords:
bovine rotavirus; bovine coronavirus; concurrent-infection; Cryptosporidium spp.; Escherichia coli K99; epidemiology; mixed-infection; systematic review; pathogens

Neonatal calf diarrhoea (NCD) is a well-known worldwide disease in the cattle industry which causes substantial economic losses due to high morbidity, mortality, growth retardation and treatment costs, as well as serious long-term consequences such as delayed first calving [1,2,3,4,5,6,7,8,9]. NCD is the most common cause of death in dairy calves during their first 30 days of age with a case fatality risk of approximately 5% [10,11].
Multiple enteric pathogens, viral (e.g., bovine rotavirus, bovine coronavirus, bovine viral diarrhoea virus), parasitic (e.g., Cryptosporidium parvum, Giardia duodenalis, Eimeria spp.) and bacterial (e.g., Escherichia coli K99, Salmonella spp., Clostridium perfringens) are infectious causative agents of NCD [1,12,13,14]. Bovine rotavirus (BRV), bovine coronavirus (BCoV), enterotoxigenic Escherichia coli K99 (ETEC) and Cryptosporidium parvum are the most frequently identified causative factors of calf diarrhoea during the first 30 days of age [15,16,17,18], whilst BRV is the most commonly involved pathogen in mixed infections [14,19,20]. Neonatal calves are most susceptible to infections with ETEC in the first four days of life [15,21]. In the first to second week of age, infections with BRV are most common, whilst infections with BCoV occur more frequently from days five to 20 [22]. Between the first and the third week, calves are most susceptible to infections with Cryptosporidium parvum [23]. To the best of our knowledge, an overview about mixed infections of these pathogens related to animal age across the literature is not available yet.
Concurrent infections of these infectious causative agents are often observed, in particular in calves with diarrhoea compared to healthy calves [17,24,25]. Besides pathogens themselves, there are other factors such as applied diagnostic methods, management-related factors (e.g., dam vaccination, colostral consumption, herd size, biosecurity practice, calf housing, hygienic condition, separation of animal based on age, feeding), and environmental factors (e.g., season of birth) that may influence recording of the occurrence and/or prevalence of enteropathogens [10,26,27,28,29,30].
The objectives of this study were (i) to review the literature systematically regarding the prevalence of BRV infections in combination with BCoV (i.e., BRV-BCoV), ETEC (i.e., BRV-ETEC) and Cryptosporidium spp. (Crypto) (i.e., BRV-Crypto; N.B. a differentiation of the species is not possible with formerly commonly used diagnostic methods like acid-fast staining, the analysis here is based on the genus level of Cryptosporidium spp. [31]) and potential influencing factors; (ii) to perform weighted random-effects meta-analyses to estimate the overall pooled prevalences across the worldwide studies and to identify sources of heterogeneity of prevalences among the study outcomes (referred as subgroup-analysis), (iii) to determine the statistical influence of potential influencing factors on the reported prevalences of concurrent infections; (iv) to analyse the chance that one of the three pathogens occur in the presence of BRV; (v) to determine the expected prevalence of mixed infection in calves with diarrhoea, assuming that both considered causative agents occur independent from each other and (vi) to model the worldwide prevalence of mixed-infection depending on the age class of sampled animals.

In total, 41 (94 sub-studies) from 1293 studies in 21 different countries were included in the meta-analysis (Figure 1). In total, 12,208 animals in approximately 2110 herds were tested for concurrent infections worldwide. The highest worldwide mean pooled prevalence (Table 2, Table 3 and Table 4) was identified for BRV-Crypto (6.69%; CI: 4.27–9.51), followed by BRV-BCoV (2.84%; CI: 1.78–4.08) and BRV-ETEC (1.64%; CI: 0.76–2.75). The regression test for funnel plot asymmetry shows no publication bias (BRV-BCoV: z = 0.41, p = 0.67; BRV-ETEC: z = 1.59, p = 0.11; BRV-Crypto: z = −0.25, p = 0.79), no outliers (Supplementary Figure S1) and no multicollinearity issues across all mixed infections. The validation of the meta-regression analysis with the restricted maximum likelihood (REML) instead of Paule and Mandel (PM) shows no significant differences in the meta-results, no outliers and no publication bias.
The geographical distribution demonstrated that the majority of BRV-BCoV infections were identified in Europe (4.72%; CI: 2.49–7.45), while the highest prevalences of BRV-ETEC (3.70%; CI: 0.32–9.39) and BRV-Crypto (16.61%; CI: 8.03–27.19) were determined in West Asia. In all concurrent infections with BRV, the highest mean prevalence was identified in calves with diarrhoea, in dairy herds and in the age classes of sampled animals between 0–14 days (Table 2, Table 3 and Table 4). The lowest pooled prevalences of the mixed infections were identified in case-control studies. In contrast to BRV-BCoV, the prevalence of BRV-Crypto increased over time (from 1980: 2.01%; CI: 0.00–11.65 to 2011–2019: 9.07%; CI: 4.72–14.44). In this context, the highest pooled prevalence was identified for the more recent diagnostic methods such as lateral flow immunochromatographic assay (BRV-Crypto; RA: 13.49%; CI: 6.80–21.74) in contrast to methods frequently applied in the past such as acid-fast staining (BRV-Crypto; MS: 3.44%; CI: 0.85–7.16; Table 4). Diagnostic methods were identified as a significant influencing factor in the uni- and/or multivariate-meta-regression analyses over all considered mixed infections. The significance and explained variance of the remaining factors on the worldwide prevalences differ between the concurrent infections and is shown in Table 5.
Our study results confirm that the most concurrent infections occur in dairy and beef production systems in an age range up to 30 days (see Table 2, Table 3 and Table 4). The highest mean prevalence of BRV-BCoV (BRV-ETEC and BRV-Crypto) was identified in animals aged between 7–14 days under consideration the sample size (BRV-ETEC: 0–7 days and BRV-Crypto: 7–14 days). Figure 2 shows that in contrast to BRV-BCoV, the prevalence of BRV-ETEC and BRV-Crypto mixed infections follow the course of the individual ETEC and Crypto prevalence related to the age class of sampled animals. The prevalence of the BRV-BCoV mixed infection is higher than expected based on the ratio of the occurrence of both individual infections in calves with diarrhoea (Figure 3). The chance/odds ratio (OR) to detect BCoV in calves was 1.83 (CI: 1.48–2.27) times higher in the presence of BRV compared to calves without BRV, whereby an opposite effect was identified for BRV-Crypto infections (OR 0.77; CI: 0.60–0.99).

As far as the authors are aware, this is the first worldwide meta-analysis to be carried out regarding the mixed infections of NCD. The results presented here revealed (i) a wide variation in the prevalence of the considered concurrent infections. The global prevalence of BRV-Crypto in calves (6.9%) was twice as high compared to that of BRV-BCoV (2.84%) and four times higher than BRV-ETEC (1.64%); (ii) calves with diarrhoea and in the age classes of sampled animals between 0–14 days showed the highest worldwide prevalence; iii) the chance to detect BCoV in calves with diarrhoea was higher in the presence of BRV compared to calves without BRV, whereby an inhibition effect was determined between BRV and Crypto infections; iv) diagnostic methods were identified as a significant influencing factor in detecting the considered mixed infections, while other factors differ related to their significance and explained variance on prevalences.

Not applicable for studies not involving humans or animals.

The authors declare no conflict of interest. None of the authors of this paper has a financial or personal relationship with other people or organisations that could inappropriately influence or bias the content of the paper. 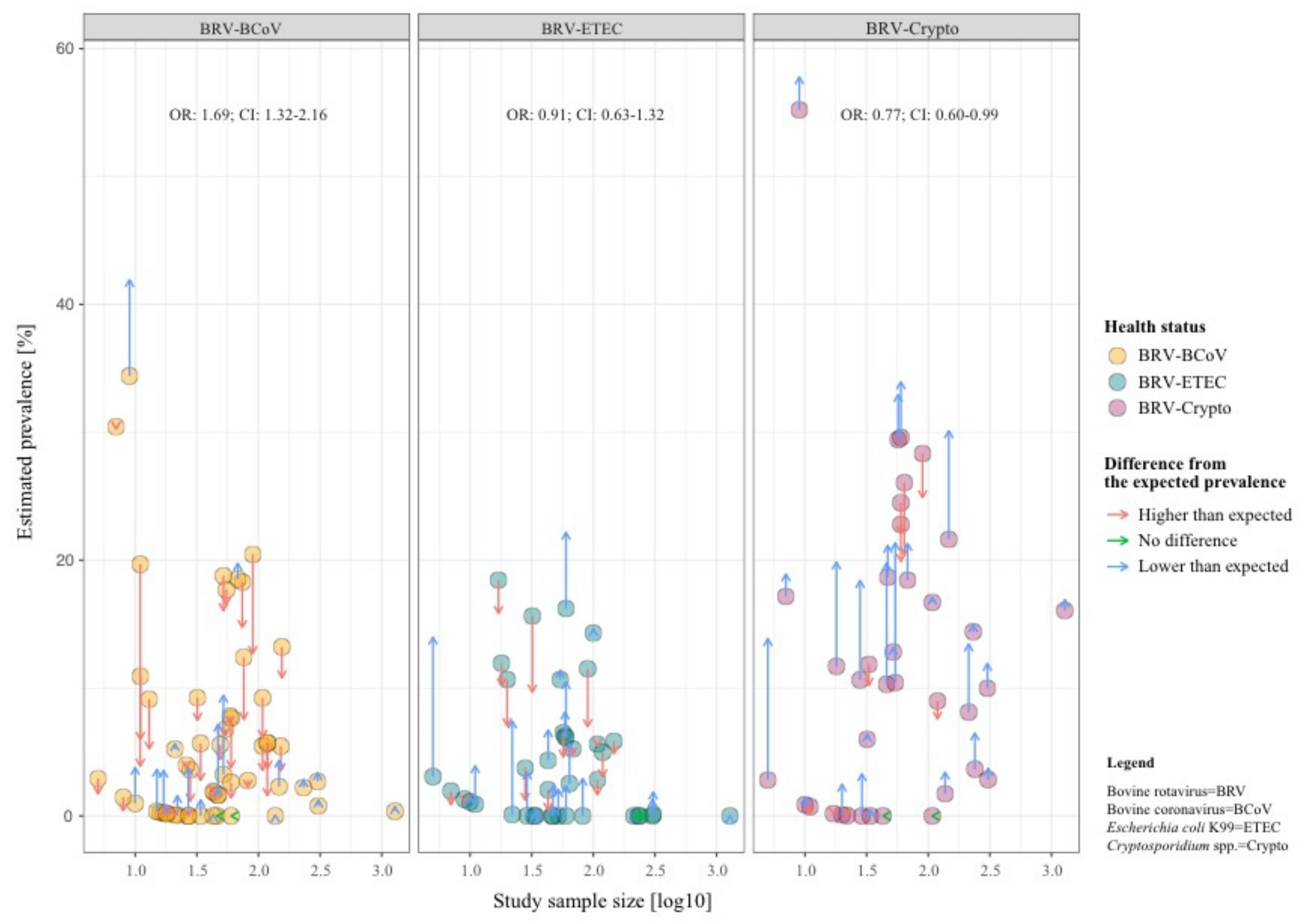