Animal welfare is a major concern in consumer’s decision about animal products. Nowadays it is possible to find eggs produced in various systems closer or not to hens’ specific behavioural requirements. In this study we compared physical characteristics and fatty acid profile (being the nutritional value of the egg intimately linked to its lipids content) in four differently labelled eggs according to the production system: enriched cage, alternative (small outdoor area), litter floor and organic (large outdoor area). We found many significant differences in both physical characteristics and fatty acids profiles as an effect of the production system and the outdoor space availability.

Food quality can be considered as one of the main influencing topics in public interest, policy, agriculture, industry, economics, and research. Consumers’ growing interest and criticism towards food production both at farm and at processing level is evident; animal welfare and organic production are two of the most important critical points [1]. Brunso and colleagues in 2002 reported that consumers’ perception of quality is based on four parameters: taste, health, convenience and production systems where animal welfare and organic production play a pivotal role [2]. Furthermore, animal welfare itself is considered a healthiness indicator in animal production [1]. Food products characterization is evolving moving from processing level to the inclusion of farm level differentiation; this trend follows consumers’ demand for animal welfare-oriented production systems [1].
Food function is nowadays not merely limited to nourishment supplying; consumers’ interest is oriented to food healthiness [3] and nutritional value, animal welfare, environmental impact of animal productions, and products’ traceability. The Total Quality concept defines in the third point of the list the nutritional quality of an animal product as related to the composition of proteins and lipids and the presence of macro and trace elements and the absence of allergenic compounds [4]. According to Aumaitre [5], fatty acid profile can be considered an ‘additional chemical factor’ defining the quality of animal productions. The quality of the product involves not only product characteristics but animal welfare and production systems (rearing conditions, feed, facilities, transport) also; traceability and farm assurance procedures including official certification of organic productions are powerful tools to certify these different aspects. Furthermore, sustainability of animal production concept is strictly related to the satisfaction of human and animal welfare requirements [6].
Gallus gallus domesticus egg can be considered the cheapest and the most common nutritionally complete food in the world; it is a rich source of lipids and amino acids [7]. Yolk fatty acids have a central role in egg nutritional properties evaluation. Egg lipids have a high biological and nutritional value: they are the major energy source and provide different essential components for maternal liver physiological reaction and embryo tissues development and functionality [8]. Egg yolk fatty acid profile variations may be linked to differences in feed composition, genetic strain, liver physiological reaction (desaturation and elongation) and polyunsatured fatty acids (PUFA) incorporation efficiency into Very Low Density Lipoprotein (VLDP) [9]. PUFAs have specific regulatory functions being involved in the synthesis of a range of biologically active compounds such as eicosanoids [7]. According to Uauy and Castillo [10] blood pressure, vasoconstriction and vasodilatation, thrombocyte aggregation, inflammatory reaction and leukocyte activity together with bronchial constriction and uterine contractility are some of the cell and tissue physiological functions regulated by these autocrine and paracrine mediators.
Welfare friendly egg production systems with their space allowance offer the birds the possibility to express their specie specific behavioural patterns; however, there is generally very low mortality in cages, and feather pecking and cannibalism are rare [11]. The importance of egg alternative production systems has grown due to the European Union legislation and particularly to the Council Directive 1999/74/EC of 19 July 1999 laying down the minimum standards for the protection of laying hens and to the Commission Directive 2002/4/EC of 30 January 2002 on the registration of establishments keeping laying hens, covered by Council Directive 1999/74/EC; layers’ unenriched cages have been prohibited from the 1st of January 2012. In addition, Council Regulation 2007/834/EC and Commission Regulation 2008/889/EC about organic production and labelling of organic products define all the requirements for organic production systems and organic product certification. Marketing standards of eggs are defined by Commission Regulation No 557/2007/EC of 23 May 2007 laying down detailed rules for implementing Council Regulation No 1028/2006/EC on marketing standards for eggs, Commission Regulation 508/2008/CE laying down detailed rules for implementing Council Regulation (EC) No 1234/2007 about standards for eggs’ marketing, Regulation (EU) No 1308/2013 of the European Parliament and of the Council of 17 December 2013 establishing a common organisation of the markets in agricultural products and repealing Council Regulations (EEC) No 922/72, (EEC) No 234/79, (EC) No 1037/2001, and (EC) No 1234/2007 which specify that Class A eggs (fresh eggs) shall also be graded by weight. Eggs grading by weight has been listed in Commission Regulation (EC) No 2295/2003 of 23 December 2003 introducing detailed rules for implementing Council Regulation (EEC) No 1907/90 on certain standards for market eggs (23/01/2006 version): XL—very large 73 g and more; L—large: from 63 g up to 73 g; M—medium: from 53 g up to 63 g; S—small: under 53 g.
Every housing system is characterized by positive and negative aspects: considering the commonly used welfare indicators: behaviour, physiology, health, production (characterized by a high number of variables). Housing system evaluation should analyse design criteria related to welfare needs (e.g., space allowance) and performance criteria as indicator of good welfare (e.g., production and physiology) [12]. There is a close link within housing system, welfare, and production, being the physiological and behavioural responses to distress an impairing effect on organism whole efficiency and, as consequence, on productive efficiency. Egg production can be affected under a quantitative and a qualitative point of view. However, links with egg nutritional characteristics and housing system and birds’ welfare are rare and contrasting.
The objective of the present work is to compare physical parameters and fatty acids profiles within market eggs from hen housed in four different systems: enriched cage, slat floor, litter floor, and organic system. In addition, the effects of the presence of an outdoor space area on the same parameters have been investigated.

Sixty-nine brown shelled market eggs (A category, M–L) from four different production systems labelled as Alternative (ALT; N = 18), Enriched Cage (ECA; N = 18), Litter Floor (LIF; N = 15) and Organic (ORG; N = 18) have been analysed. Production systems characteristics according to European and National legislation have been listed in Table 1. All eggs were one day old and stored at 5 °C before analysis.

Data analysis was performed by ANOVA using General Linear Model procedure of SPSS. In our model dependent variables were eggs’ physical parameters (8 variables) and fatty acid profiles (11 variables), sources of variation were production system (System; 4 variables) and Outdoor space allowance (OSA; IND = indoor, OUT = outdoor area; 2 variables), the post hoc Bonferroni test was used to investigate the significant differences both in production systems and in the OSA groups (p ≤ 0.05) [17]. Two principal component analysis (PCA; variance-covariance matrix) were carried out with fatty acids (11 factors) and physical parameters (8 factors) as variables. Two scatterplots were produced, Scree plot test was used to choose principal components to explain the majority of the variation in the dataset (see additional tables for percentage of variance and PCA statistics details) [18].

Results on egg physical parameters and related ratios are presented in Table 2. Whole egg weights showed slight but significant differences, the heaviest were ALT eggs. No significant differences were recorded in albumen weight. Yolk weight was significantly higher in ALT eggs. Eggshell weight was lower in ORG eggs. ALB/WEG ratio reveals a lower albumen content in ALT eggs which are characterized by a higher ratio YOL/WEG together with ORG. SHE/WEG ratio differences were not significant. TL content showed higher values in ORG and ALT eggs, on the contrary LIF eggs showed the lowest lipidic content.
Considering the effect of OSA on physical characteristics and TL yolk content, the presence of the en plein air area significantly influences the yolk weight with OUT being higher than IND with a higher ratio in YOL/WEG too in the OUT eggs. As a consequence, TL content was also higher in OUT eggs than in IND eggs.
Fatty acid composition of yolk TL in the four system groups and the two OSA groups are listed in Table 3. Production systems significantly influence mean values of all the identified fatty acids, with the only exception of docosahexaenoic acid. Significant differences are shown for SFA, MUFA, PUFA, and n6/n3 ratio. ECA eggs showed the lowest concentration of palmitic acid and ORG eggs the highest; however, the only significant difference was found between ECA and ALT eggs. The lowest proportion of stearic acid was found in LIF eggs and it was significantly different when compared to ALT and ORG eggs which had the highest concentration. Oleic acid highest concentration was recorded in LIF eggs and it was highly significant in comparison to all other housing system. ALT, ECA and ORG eggs showed the highest significant concentration in linoleic acid when compared to LIF eggs. The highest α-linolenic acid concentration was recorded in ECA eggs, a significant lower proportion was found in ALT and ORG eggs, whereas it was not detected in LIF eggs. ORG eggs showed a significantly lower concentration in arachidonic acid compared to the ALT eggs, and ECA and LIF showed an intermediate mean proportion. Docosahexaenoic acid ranged from 1.2 to 1.6% and mean values did not differ significantly between systems. ORG and ALT eggs showed the highest concentration in SFA and it was significantly different compared to the concentration of ECA and LIF eggs. The proportion of MUFA was significantly higher in LIF eggs and similar lower mean values were recorded in the other production systems. The highest PUFA proportion was recorded in ECA eggs and a progressive lower content was recorded in ALT, ORG, and LIF eggs, the latter showing the significant lowest proportion compared to all other system groups. The n-6/n-3 ratio was significantly different between ECA and ALT eggs, showing the lowest (10.4) and highest (16.1) value respectively, and similar intermediate values were calculated in LIF and ORG system (Table 3).
Considering the effect of the OSA, the fatty acid profile in OUT and IND eggs showed some significant differences (Table 3): the proportion of palmitic, stearic and linoleic acids was higher in eggs from outdoor reared hens, on the contrary oleic acid was higher in eggs from indoor reared hens. The total proportion of SFA and PUFA was significantly higher in OUT eggs, whereas the total proportion of MUFA was significantly higher in IND eggs. The n6/n3 ratio was significantly higher in OUT eggs.
PCA results with physical parameters is presented in Figure 1.
In physical parameters, components 1 and 2 define the 98% of the variance. In Component one the two leading variables are WEG (0.63) and ALB (0.48). In Component 2, YOL is the most determinant variable (0.69). Wide overlapping areas for ECA eggs with all the other clusters are clearly visible, ORG and ALT eggs are mainly differentiated on Component 1, on the other hand, LIF eggs are principally differentiated on the Component 2 (Tables S1–S3).
PCA results for fatty acids profile are presented in Figure 2. On Component 1, LIF eggs were totally separated from the other systems’ eggs, on the same component ECA eggs showed some overlapping ALT eggs.
In fatty acids the 82% of the variation is defined on the first two components (1 and 2): PUFA and linoleic acid concentrations are the determining variables on Component 1 (0.50 and 0.46). On Component 2 the most influencing parameter is n6/n3 ratio (0.98). LIF eggs are totally separated from the other clusters, ECA eggs show some overlapping with ALT eggs cluster which at the same time is slightly overlapped with the compactly clustered ORG eggs (Tables S4–S6). 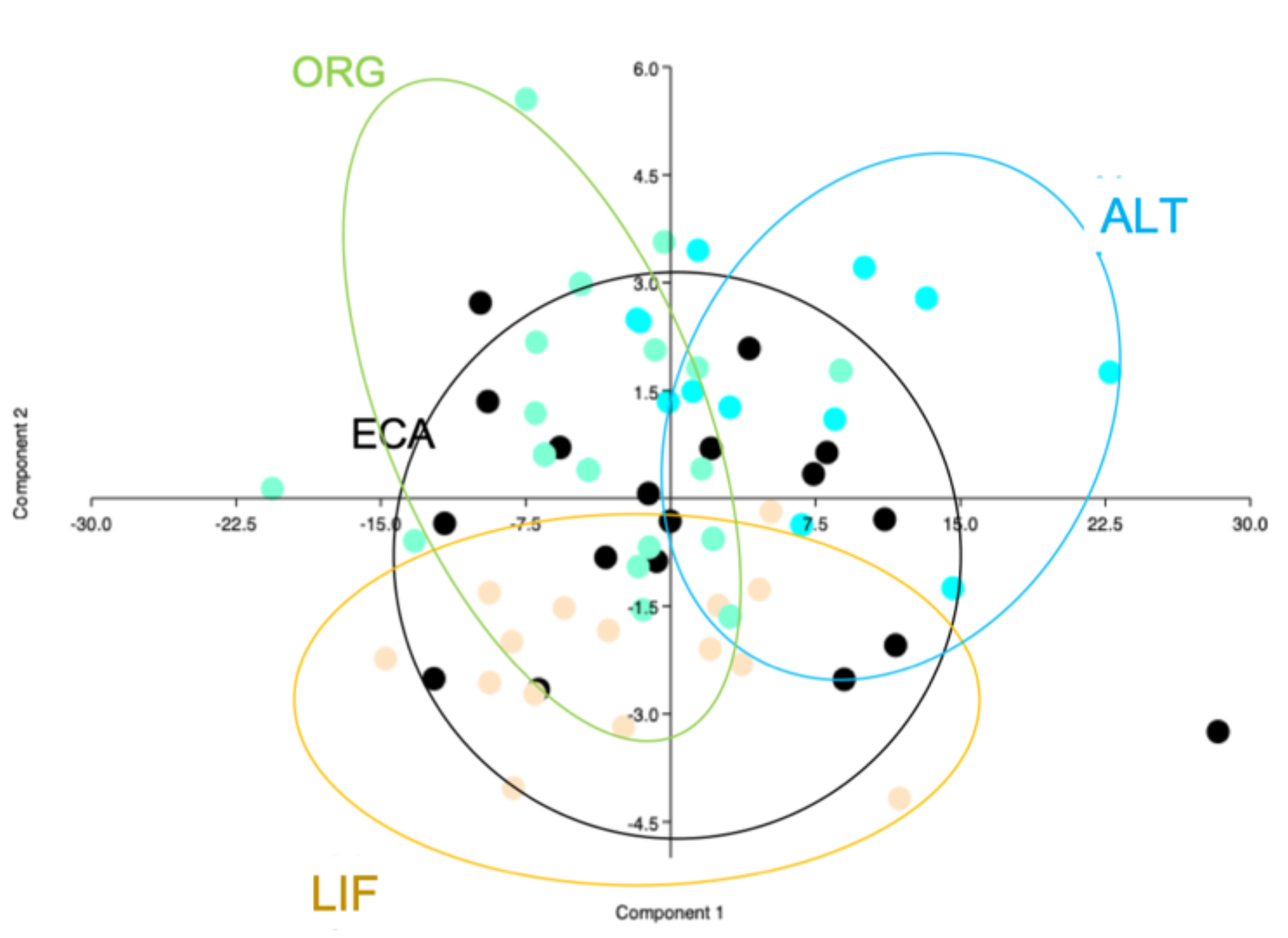