Indoors or Outdoors? An International Exploration of Owner Demographics and Decision Making Associated with Lifestyle of Pet Cats
Previous Article in Journal

Correct identification of mastitis-causing pathogens is key in lactating dairy cattle as management decisions depend on correct diagnoses. One of the most concerning pathogens is Staphylococcus aureus. In simple laboratory set-ups, presumptive identification is performed by assessing the bacterial colonies’ physical characteristics. In the absence of notable characteristics, isolates are deemed to be non-aureus isolates. Over a decade, however, it became evident that S. aureus identifications may be incorrect as further testing was performed on milk and mammary secretion samples. This short report details the laboratory findings from isolates collected on a Georgia dairy farm over a 10-year period. Almost 64% of isolates that were deemed to be non-aureus isolates were actually identified as S. aureus. Just over 26% were correctly identified. This communication is a cautionary tale to laboratories, but especially dairy producers performing simple on-farm microbiological procedures. Further testing or more advanced testing may need to be performed to develop appropriate control, prevention, and treatment plans.

Staphylococcus aureus is one of the most concerning mastitis-causing pathogens in dairy cattle. Using basic microbiological techniques, S. aureus is typically identified by colony characteristics and hemolysis on blood agar where isolates without hemolysis are typically considered to be coagulase-negative staphylococci (CNS) isolates. Herein, we present a decade-long case study where suspected S. aureus isolates from one Georgia dairy farm were further tested to confirm presumptive identification. Presumptive identification of bacterial growth from 222 mammary secretions from bred Holstein heifers and lactating cows was conducted at the time of collection. Presumptive identification of S. aureus on blood agar was based on observation of colony morphology, color, and presence or absence of a broad zone of incomplete hemolysis and a smaller zone of complete hemolysis at 48 h. Those without hemolysis were presumptively characterized as CNS. All isolates were further plated on mannitol salt agar and a coagulase test was performed. A positive for both of these tests together was deemed to be S. aureus. A selection of isolates was tested using API® Staph to biochemically confirm S. aureus identification. Data showed that 63.96% of isolates presumed to be CNS isolates were identified as S. aureus, 9.46% of isolates presumed to be CNS isolates were identified as coagulase-positive staphylococci (CPS) species (but not S. aureus), and 26.58% of samples that were presumed to be CNS isolates were identified correctly.
Keywords: misdiagnosis; Staphylococcus aureus; CNS; NAS; hemolysis misdiagnosis; Staphylococcus aureus; CNS; NAS; hemolysis

Staphylococcus aureus continues to be a major cause of bovine mastitis. Managing this form of mastitis via preventative measures has been shown to be economically advantageous [1,2]. In addition, treatment of S. aureus mastitis during lactation is economically justified in many situations [3]. If therapy is delayed, the duration of infection increases and is accompanied by extended periods of bacterial shedding, elevated somatic cell counts (SCCs), scar tissue formation, and spread of infection to multiple quarters within a cow, all of which are associated with low cure rates [4,5] and transmission to other cows in the herd [6].
Presumptive identification of S. aureus on blood agar is largely based on observation of colony morphology, color, and hemolysis, typically both complete and incomplete. Because fewer than 5% of isolates express no hemolysis, it is widely accepted that the presence of complete and/or incomplete provides a strong diagnosis of S. aureus, where lack of hemolysis indicates a non-aureus staphylococci (NAS). The NAS are typically distinguished from S. aureus as being coagulase-negative staphylococci (CNS). A coagulase test, however, will not differentiate S. aureus from the coagulase-positive species Staphylococcus intermedius or the coagulase-variable species Staphylococcus hyicus in the absence of hemolysis. Thus, an additional step commonly taken is to plate isolates on mannitol salt agar (MSA) to determine the capability of the isolate to ferment mannitol (S. aureus is capable, whereas most NAS, including CNS, are not). Utilizing the MSA test in combination with the tube coagulase test enhances the specificity and sensitivity of identification [7].
In past work assessing mastitis prevalence in Georgia dairies, it was noted that isolates presumptively identified as CNS were associated with the high SCCs typically observed with S. aureus, e.g., >500,000 cells/mL. Because of the elevated SCCs, further testing was carried out, which revealed these isolates were coagulase positive as well as MSA positive, indicating presumptive identification as S. aureus, rather than CNS, which prompted continued collection and testing of isolates. The purpose of this investigation was to determine the prevalence of these non-hemolytic S. aureus isolates that were misclassified as CNS. The correct identification is important from a mastitis management standpoint, as all cows diagnosed with S. aureus mastitis should be managed much differently than those with CNS mastitis, such as separating from the lactating herd to prevent contagious spread of S. aureus.

A total of 222 mammary secretions had been previously aseptically collected from bred Holstein heifers and lactating cows. Bred Holstein heifers and lactating cows were housed and cared for in the University of Georgia Teaching Dairy [8]. The average herd size across the 10 years of data collection was approximately 111 lactating cows housed in a conventional freestall barn with an average milk yield of 66.1 lbs/cow and an average somatic cell count (SCC) of 273,500 cells/mL. Lactating dairy animals were milked 2 times/day in a double-6 herringbone parlor. After collection, mammary secretions were plated on trypticase soy agar plates with 5% sheep blood using an aseptic technique. Plates were incubated for 48 h at 37 °C and then visually inspected for the presence of colony growth. Through presumptive identification based on colony color, morphology, and presence of hemolysis (discussed in the succeeding paragraph), a determination was made regarding whether isolates were S. aureus or other staphylococci (such as CNS).
Colonies that were creamy to grayish-white or yellow, smooth, circular, catalase positive, and that exhibited a narrow zone of complete hemolysis and a wide zone of incomplete hemolysis, were identified as S. aureus. Colonies identified as CNS because no hemolysis was present were further tested with the tube coagulase test and the MSA test. The tube coagulase test was performed according to basic microbiological procedures. To perform the MSA test, an MSA plate streaked with bacteria was incubated for 24 h at 37 °C. The MSA test was deemed positive if the bacteria colonized the agar surface and the plate medium turned bright yellow, indicating that the pathogen was able to grow in a high saline environment and fermented mannitol to produce the color change. If the bacteria colonized the agar surface, but the medium did not change color (remained pink), the test was deemed negative (for mannitol fermentation).
A coagulase-positive, MSA-positive result was categorized as S. aureus given its growth requirements and characteristics, despite the lack of hemolysis. A coagulase-negative, MSA-negative isolate was termed a CNS. A coagulase-positive, MSA-negative isolate was termed a coagulase-positive staphylococci (CPS). We also tested a subset of the nonhemolytic S. aureus isolates (approximately 60%) using the API®Staph system (bioMerieux, Inc., Marcy l’Etoile, France) according to manufacturer’s specifications to further support our S. aureus identification. All isolates tested were determined to be S. aureus. The API®Staph system was also used to test a selection of the CNS and CPS isolates to determine various species of staphylococci detected from cases of mastitis.
The distribution of infections amongst the quarters was described and analyzed by the non-parametric Kruskal–Wallis test with Dunn’s post-hoc testing.

Given the results of this study, the current guidelines for presumptive identification of S. aureus and CNS are inadequate. The completion of coagulase tests and MSA tests eliminates such speculation and should be conducted to differentiate CNS from S. aureus. The correct identification is important from a mastitis management standpoint, as all cows with S. aureus mastitis and with elevated SCCs should be handled properly and in a timely manner to prevent the spread of this contagious pathogen. Ultimately, dairy producers should consider submitting samples to laboratories that can verify identification using either DNA-based technology or proteomics, such as PCR or MALDI-TOF.

All husbandry procedures were carried out according to the Guide for the Care and Use of Agricultural Animals in Agricultural Research and Teaching. Animals were covered under protocols approved by the Institutional Care and Use Committee of University of Georgia (AUP# 2020 01-029-R1).

The data reported in this study is available upon request from the corresponding author.

The authors would like to thank the many undergraduate and graduate students that dedicated their time to collection and microbiological analysis of mammary secretions. 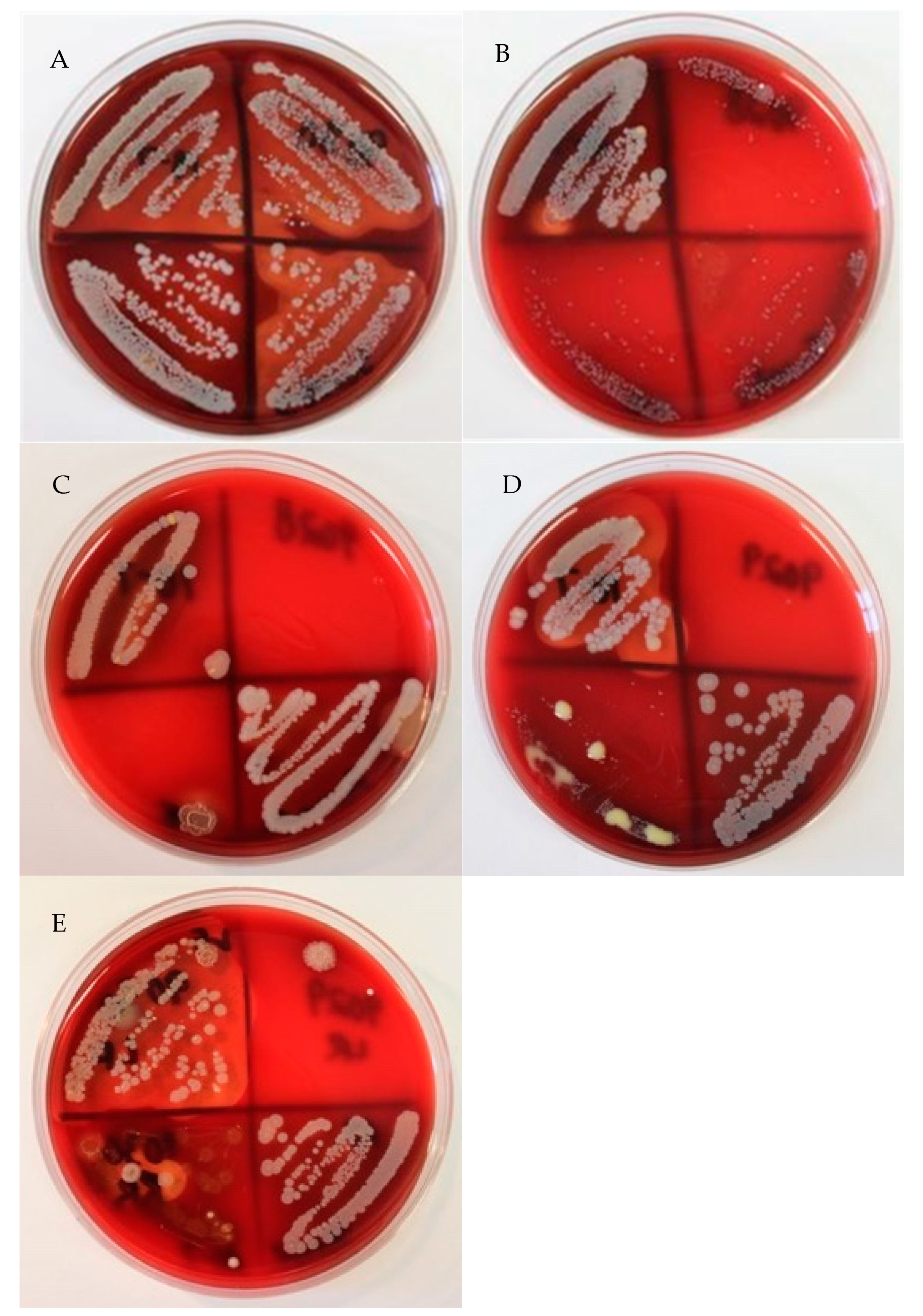 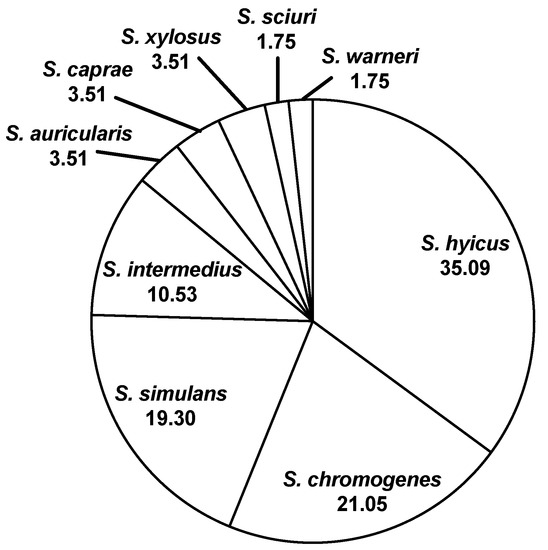 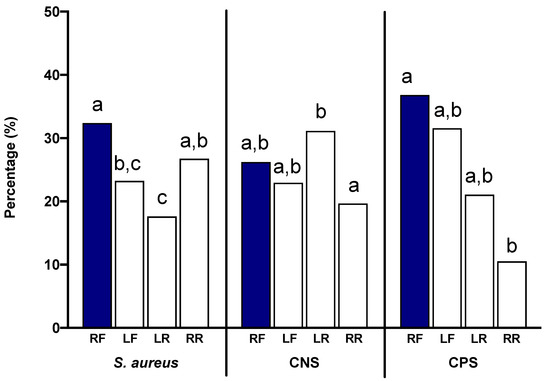