Molecular Survey of Babesia spp. and Anaplasma phagocytophilum in Roe Deer from a Wildlife Rescue Center in Italy
Previous Article in Journal

Toxoplasma gondii is a parasite that can cause serious disease in humans, especially in pregnant women. This parasite is found in many animals and people can be infected by eating raw or undercooked meat. Wild boar are known to harbor this parasite; populations and habitats have increased in the past decade, as it also increased the consumption of venison. The European population of wild boar has a mean prevalence of 26%. In our study, we found that the prevalence in the Slovenian wild boar population is 62%, the highest in the world to date. The prevalence was influenced by age and weight, but not by gender. In conclusion, the hunting community should be made aware of the high risk of parasite exposure when dealing with wild boar meat.

Toxoplasma gondii is a zoonotic parasite of great public health concern. Wild boars could be considered an emerging source of toxoplasmosis in humans due to the popularity of venison and their increasing population. The aim of this study was to determine the seroprevalence of T. gondii in the Slovenian wild boar population and evaluate risk factors for human infection. Of 353 samples, 62% were positive for T. gondii using ELISA tests. This is the highest T. gondii seroprevalence reported to date in wild boar worldwide. The increase in prevalence with increasing age (p = 0.003) and weight (p = 0.002) were statistically significant, whereas gender was not (p = 0.781). Odds for being T. gondii-positive increased with age with the largest difference being between 2–3-year-old and 1–2-year-old animals (OR = 2.66, 95%CI: 1.03–6.85). Animals weighing 20–40 kg had a higher risk than animals weighing 0–20 kg (OR = 2.74, 95%CI: 1.21–6.20), whereas a further increase in the weight was not associated with increasing the odds. Due to the high Toxoplasma prevalence, the study concluded that the risk of exposure to T. gondii from handling raw or undercooked wild boar meat is high. Surveillance protocols should be established at the national level together with increased awareness within the hunting community. View Full-Text
Keywords: Toxoplasma gondii; wild boar; game meat; zoonosis; ELISA Toxoplasma gondii; wild boar; game meat; zoonosis; ELISA
►▼ Show Figures 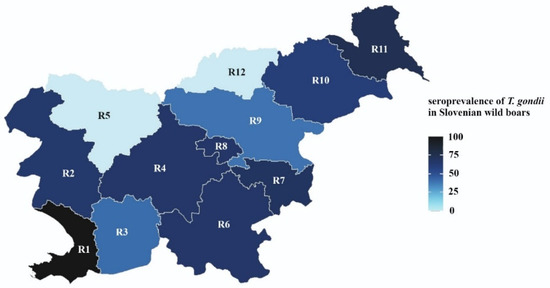