Rachel A. Ankeny
2 and

Australia does not have any federal legislation pertaining to animal welfare; thus, the responsibilities lie with each state and territory. This situation has led to eight different pieces of animal welfare legislation across the country, with potentially distinct content and avenues for interpretation. These differences may create problems for the enforcement of animal welfare law, and hence it has been suggested that a uniform approach is required. However, before such an approach can be considered, the extent of the inconsistencies between the states and territories needs to be assessed. This review compares the differences between state and territory animal welfare laws to determine the presence and nature of any major inconsistencies. A total of 436 primary pieces of legislation were reviewed, with 42 included in the detailed analysis. Animal welfare laws were found to be generally consistent across the states and territories of Australia, but with some important shortcomings that are discussed.

Animal welfare is not included in the Australian Constitution, rendering it a residual power of the states and territories. Commentators have suggested that inconsistencies exist between the state and territory statutes, and that a uniform approach would be beneficial. However, there has been no comprehensive assessment of the nature or extent of these purported inconsistencies. This review addresses this gap by providing a state-by-state comparison of animal protection statutes based on key provisions. Utilizing systematic review methodology, every current Australian statute with an enforceable protection provision relating to animal welfare was identified. A total of 436 statutes were examined, with 42 statutes being included in the detailed analysis. The comparison showed that animal protection laws are generally consistent between each Australian jurisdiction and were found to have similar shortcomings, notably including lack of a consistent definition of ‘animal’ and reliance on forms of legal punishment to promote animal welfare which have questionable effectiveness. It is argued that there is a need for attention to definitions of key terms and future consideration of alternative forms of penalties, but that a uniform federal approach may not be necessary to address these shortcomings. View Full-Text
Keywords: animal welfare legislation; animal cruelty; law enforcement; Australia; enforcement gap animal welfare legislation; animal cruelty; law enforcement; Australia; enforcement gap
►▼ Show Figures 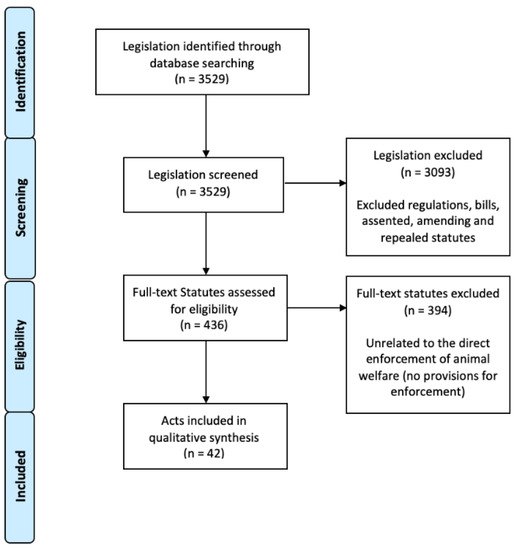